From Yungas Forest To Desert

Today was a day of contrasts. We began the morning with a successful search for the Rufous-throated Dipper in humid yungas forest on the east slope of the Andes. We then worked our way northwest over the course of the day and watched the landscape change to low shrubby habitats, then puna grassland, barren canyons and eventually dry stoney desert populated by massive, saguaro-like cacti. 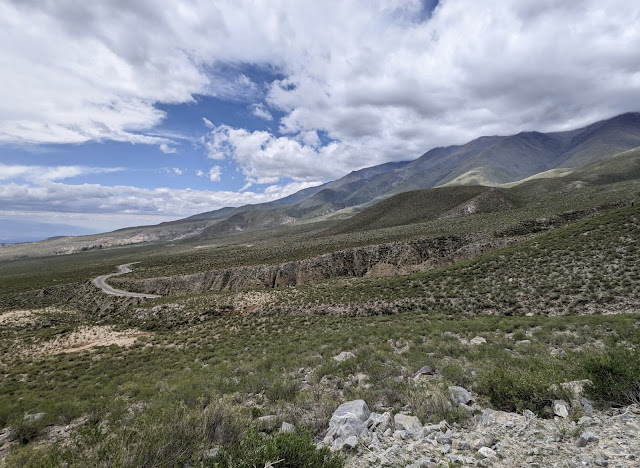 Of course, there were many birding stops to be made, and most of them were quite successful. During the mid-morning hours we investigated several creek valleys that cut through the grassland, quickly connecting with our much-desired White-browed Tapaculo and Tucumán Mountain Finch.

The birding was fantastic here and we enjoyed the abundant Burrowing Owls and Subtropical Doraditos, our first Huayco Tinamou (heard-only, unfortunately) and displaying Hellmayr's Pipits.

The landscape transitioned to steep-sided canyons with sparse vegetation once we had crossed over to the dry side of the mountain. A medley of colourful wildflowers added a spark of beauty.

We stumbled across our first Streak-fronted Thornbirds here and spent a few minutes watching the pair take turns inside the rather large nest.

When birding a stark desert landscape in the mountains, the creek valleys are where most of the birds are at. We spent over an hour at a particularly attractive ravine and racked up a solid list of birds.

The main attraction here is the possibility of encountering Bare-eyed Ground-Doves, a range-restricted species endemic to northwestern Argentina. They did not disappoint, and we found a few of them.

Giant Hummingbirds are always a crowd pleaser. I mean, who doesn't like a hummingbird that is the size of a martin?

We showed up and immediately found several pairs of yellow-finches. The problem is, they all appeared to be Greenish Yellow-Finches. Voice is one of the better ways to tell these two similar bird species apart at this time of year and the male sang a perfect Greenish Yellow-Finch song.

This female paused long enough for me to take her photo. I think that she is also a Greenish Yellow-Finch.

I have spent quite a bit of time since, reading up on these two species and comparing photos online. I must admit, I still am not sure how to tell them apart at this time of year, and I am pretty sure that some of the photos of supposed Monte Yellow-Finches from this part of Argentina are mis-identified. I would suggest that birders use extra caution when deciphering this tricky ID, and to rely on voice which seems to be more distinctive.

Of course, it wouldn't be a day of birding in the Andes without a few sightings of Andean Condors. This trio was consorting over the canyon while we were trying to figure out the yellow-finches.

My last lifer of the day was a pair of Steinbach's Canasteros just outside of Amaicha del Valle, while Laura also added her first Burrowing Parakeets. The hostel that we found in Amaicha del Valle actually had a large group of them roosting on the property, allowing us to get our fill of this beautiful and unique species. I didn't take any photos this time, but here is one from further south in Argentina during my 2016 trip.
That evening, Laura and I headed out to the nearby Quilmes ruins to search for Chaco Owls after dark. While we waited for nightfall, we contented ourselves by watching these cavies scampering around. Lots of food for the owls...
Right at dusk, we were surprised to see a small fox walking down the road, which we have since identified as a Chilla (Lycalopex griseus). She did not seem concerned with us at all, walking almost right up to us before plopping down for a rest!
As dusk fell, an Elegant Crested-Tinamou called and a Band-winged Nightjar flew over the dirt road. We tried for the owl in apparently suitable habitat, but came up empty. You can't get them all. Still, it had been a very full day with a ton of great sightings! The final highlight was the empanadas that we bought from a restaurant on our way back to town - the best we have had in Argentina so far. 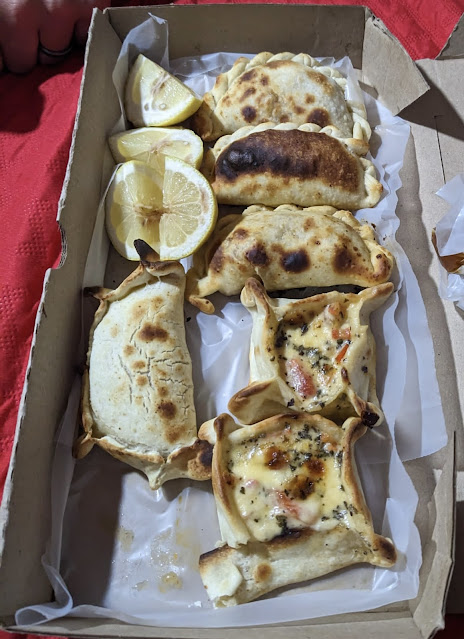 Posted by Josh Vandermeulen at 17:42 No comments:

The Quest For The Rufous-throated Dipper

The east slope of the Andes is one of my favourite places in the world to explore. As I've mentioned before on this blog, this is due to several factors, but prime among them is that this slope receives a high level of rainfall. Turn on the taps, and you turn on the biodiversity. Different plant species grow within particular elevational bands, and these distinctive ecosystems allow other species to flourish. In short, diversity is high and one can access many unique habitats as one travels up or down the eastern slope.

Laura and I have been, up to this point, in the dry regions east of the Andes, but a few days ago we had our first chance to ascend up the eastern slope of the Andes. The landscape changed dramatically as we drove, starting with dry Chaco scrub for miles, which slowly "greened up" as we headed westwards with the Andes looming beyond. We overnighted near the foot of the mountains in the town of Monteros where we found an excellent little hotel for a very good price.

We followed the tarmac of Highway 307 high into the mountains, with our destination for the evening being the town of Tafí del Valle. Of course, I had a shopping list of most wanted birds for this scenic stretch of road cutting through beautiful forests, with the range-restricted Yellow-striped Brushfinch, White-browed Tapaculo, and Rufous-throated Dipper being the top three.

Our first stop was along a nice stretch of continuous yungas forest where right away we found a pair of Plush-crested Jays. While we should bump into this species a fair bit over the upcoming weeks, we were thrilled to find our first. I'm a sucker for a lifer jay, after all.

We birded up the road for half a kilometre or so before returning to the car. It did not take us long to find our first Yellow-striped Brushfinch; this species ended up being quite common during the day.

The Yellow-striped Brushfinch is endemic to northwestern Argentina, where it resides in semi-humid montane forest on the east slope of the Andes.

This also was the site of our first (and so far, only) Rufous-browed Warbling Finch.

Birding along Highway 307 was productive, but it wasn't without its challenges. Prime among them was the heavy volume of traffic. At times, transport trucks would blast us with exhaust fumes, their engine noise blocking out all sounds of nature, while a caravan of twenty or more vehicles followed behind. Not the most tranquil birding experience, that is for sure! Laura and I resorted to walking along the elevated stone barriers to minimize the chances of being hit by a vehicle. We just had to be a little careful watching our footwork, so as to not fall off the steep cliffs beside the road!

We stopped periodically at various elevations, getting out to walk stretches of the road. Though the traffic was frustrating, the birding was excellent and we added species such as Yungas Guan, Golden-winged Cacique, Torrent Duck, Slender-billed Woodstar, Tucumán Parrot and more!

I contented myself with photographing some of the plants and butterflies alongside the road as well.

We found a small track leading off of the main highway and enjoyed some temporary relief from the steady stream of traffic. This was a productive stop as we heard our first White-browed Tapaculo alongside the creek. Unfortunately, despite our best efforts, the closest we came to observing it was seeing some branches move. We would still have many more chances at this species the following day, however. We also heard a surprise Red-legged Seriema calling from a partially-cleared area upslope. Definitely not a species we thought we would encounter on a mountain road!

The final one of our main targets was the Rufous-throated Dipper. There are only five species in this family of charismatic, river-dwelling birds and Laura and I had seen three up to this point. The American Dipper found in North and Central America, the White-capped Dipper which is widespread in the Andes, and the White-throated Dipper of Eurasia. The only two left were the Brown Dipper of eastern Asia, and the Rufous-throated Dipper, the rarest of the five. It ranges in northwestern Argentina and southern Bolivia and was one of my most-wanted birds for the entire trip.

Unfortunately, our dipper quest did not go to plan. We spent the entire afternoon walking alongside visible stretches of the river to no avail. Torrent Ducks were readily available, and we experienced very brief moments of hopefulness when a Black Phoebe perched on a semi-submerged rock. But the dipper remained unaccounted for.

Torrent Ducks never cease to amaze me with how they thrive in raging mountain rivers. They will dive into rapids quite nonchalantly, popping up effortlessly on the other side.

Eventually, we admitted defeat and headed up over the pass towards Tafí del Valle to find a room for the night. Our last new species of the day was a Crested Becard that we watched out of the car window while filling up on gas. That evening, we resolved to return to the upper stretches of the road in the morning, for another crack at the dipper.
January 17, 2023
We retraced our route to the best-looking stretches of river, our focus renewed after a restful sleep. Would this second attempt at the Rufous-throated Dipper be fruitful?
An hour and a half into our search, this did not appear to be the case. I left Laura to keep walking alongside the river, while I fetched the car where we had parked beside a bridge. I made sure to diligently check the river as I walked, in case we had somehow missed a dipper on the first pass. Not surprisingly, I was unsuccessful.
Upon returning with the car, I found Laura at a closer point than where I had left her, which seemed strange as the plan had been for her to continue to walk upriver. When she noticed that it was me, however, she frantically pointed down at the river. She had found the dipper!
A wave of relief washed over me as I viewed the Rufous-throated Dipper for the first time. It was a dapper little bird, charcoal-gray with a smart rufous throat patch and a crisply contrasting white wing patch.
Laura filled me in on the story. Not five minutes after I departed, she found a dipper and then a second one. She was torn between staying on the birds or running down the highway to fetch me (we had no cell signal here). She opted for the former, which was a good call as she managed to follow one of the dippers downstream until I arrived. What a lucky turn of events!
Even luckier, we had found the dipper with enough time to spare for us to return to the hotel to partake in the included breakfast shortly before that window closed at 9:30. Coffee and a croissant never tasted so good.
Posted by Josh Vandermeulen at 20:03 No comments: