We had the highest daily species count of the trip so far on this day. The winds finally shifted to the northeast by the afternoon, and as a result we had the largest duck flight in days. Included were 400 Brant, 140 Northern Pintail, 500 Long-tailed Duck, lots of scoters, and the first King Eider of the trip. One of the highlights for me was seeing a gorgeous white-morph Gyrfalcon just to the east of us, and getting some photos as well! This was my 298th "self-found" bird for the year.


Excuse the terrible shots! I was just happy to get photos of a Gyrfalcon. Check out those feathery legs in the above photo - great for life in the Arctic.


While these photos don't do the bird justice, it was an incredible animal. Gyrfalcons have always had a sort of mythical allure to me. The few sightings in southern Ontario were of brief looks at a flyby bird, and unfortunately I had never had the good fortune to cross paths with one. To see a few of these beauties in the flesh was undoubtedly a highlight of the trip for me!

Later on in the day, I was zoomed in all the way with my scope trying to identify a distant few scoters when two small white birds flushed from the water. I initially called out "Phalaropes!" but then corrected myself when I realized they were Black Guillemots! I had a tough time staying on the birds as they seemed to vanish into the waves. While not a year bird (I saw one in fine breeding plumage that Barb found this summer on James Bay), this was self-found bird #299 this year.


Like I said, today was an incredible day. We had more highlights - the continuing Baird's Sandpiper, good looks at Hoary Redpolls, an immaculate adult Glaucous Gull, and a Boreal Owl that I flushed near camp. Just a great day at the coast! 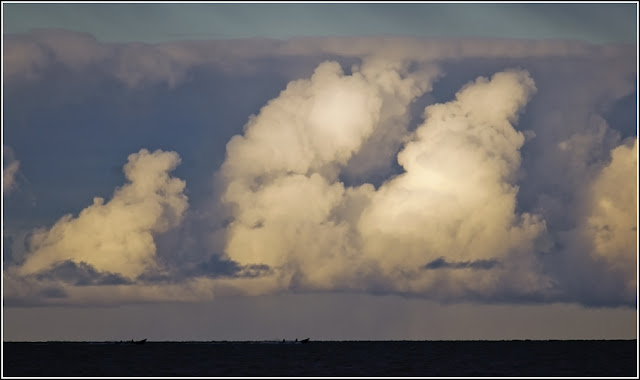 In the above photo, taken near sunset, you can see two boats traveling east. We didn't know it at the time, but these boats were part of a rescue mission to search for a man that had disappeared when out hunting. Unfortunately the man hadn't been found by the time we arrived back in Moosonee and it was almost certain that he perished.

That evening we heard on the radio about Hurricane Sandy, a massive cyclone that was moving inland from New York. We figured we were going to start feeling the effects, as the counter-clockwise movement of the massive low pressure cell would create northeast winds where we were. This could be the weather we were waiting for! I jokingly mentioned to Alan that night that October 29 was going to be named "The Day of the Fulmar".

We thought yesterday was good, but today was even better! The weather was similar to yesterday however the winds were moderate strength from the north all day long. All the ducks seemed to move on cue and we had some spectacular numbers.

The Brant flocks were certainly a highlight. Flocks streamed by all day long and when it was all said and done we had counted 24,100 of them! I think this is a record high for Ontario? Northern Pintails were also moving in ridiculous numbers. We had 6,600 of them! Perhaps also record high? Mixed in with the pintails were 63 American Wigeons (we had seen none prior to this) and 32 Northern Shoveler. Other duck numbers were crazy high - 280 Green-winged Teal, 8,000 Long-tailed Ducks, 300 Black Scoter, 350 White-winged Scoter, 600 American Black Duck, etc. Just incredible!


The highlight of the day, perhaps even the trip for me, occurred around 9:25 AM. It was low tide and I was scanning over to the west when I got on a gull-like bird right at the waterline. My heart jumped a bit but I tried to convince myself that it was a Ring-billed Gull. But it was shearing over the waves and I knew immediately what it was. I think the conversation went something like this:

"I've got a gull, its flying up and down over the waves like how shearwaters do"
No response from Alan.
"Actually, it might be a fulmar, yeah I think this might be a fulmar" I said calmly, though I'm sure my heart skipped a beat.
"Sure it is" was his sarcastic reply.
"Oh s*** I think it is a fulmar!" I now had a diagnostic look as it banked. "It is! A f****** fulmar! Its shearing over the waves, heading right!"
Alan got on the bird and mentioned that it was definitely a typical looking fulmar. At fairly close range too!!

At this point Alan and I grabbed our cameras and tried to get photos. We lost it though and despite taking some photos of the location where it was, I missed. Alan re-found the bird farther east a minute later and again I tried to photograph it unsuccessfully. Finally on the third try I got it, but the bird was more distant at this time. Check it out - the world's worst photo of a Northern Fulmar! Eventually the bird went back out to sea, but I was happy to finally get 339 in the bag after 5 days without a yearbird. It was my 300th self-found bird this year in Ontario as well.


Wow, what a day! I immediately went back to the shelter and grabbed a celebratory beer even though it was only 10:00 AM. The rest of the day had more highlights though no more fulmars. We had a King Eider, Red-necked Grebe, Horned Grebe (both grebes are rare on James Bay), Iceland and Glaucous Gulls, Pomarine and Parasitic Jaegers, and more. We spent the entire day seawatching with only a few quick breaks to eat. This is what its all about!!!
Posted by Anonymous at 19:00

Josh, the Gyr is amazing! I might make it out to Netitishi in 2032... around my retirement ;( Congrats again!