The rest of Moosonee

On Sunday, the winds continued strong out of the south, however it was gloomy and overcast with slightly cooler temperatures. It seemed like a rarity would be just around the corner as we wandered around town. Some southern or displaced birds were evident, as we noticed a few Mourning Doves as well as five American Golden-Plovers on the lawn near the train station.


The flock consisted of five birds, including a very late adult bird. Nearly all the American Golden-plovers in southern Ontario at the moment are juveniles.


We were able to get quite close to the shorebirds as they fed on the lawn. Occasionally one would pull up a large earthworm from the ground.


Always vary to any danger around them, every so often they would hunker down on the ground with an eye to the sky. They almost appeared invisible whenever they were like this. An effective camouflage, I guess!


There were about two dozen Horned Larks feeding in the short grass as well. At least two birds appeared to be "Hoyt's" Horned Larks, the subspecies that breeds in the Hudson Bay lowlands. This form is paler than usual with a white eyebrow.


We continued around town and passed by the river. The Beared Seal was there! It was resting on the sandy bank of an island in the Moose River, a decent distance away though, unfortunately.


It was a lifer for Jeremy. I saw my first on the exact same date last year, though the seal was lounging on a dock on our side of the river.


Near the airport on the east side of town, a few Peregrine Falcons were flying and some pipits and larks were near the runways. We came across this very tame Mourning Dove (not the hoped for Inca Dove!) 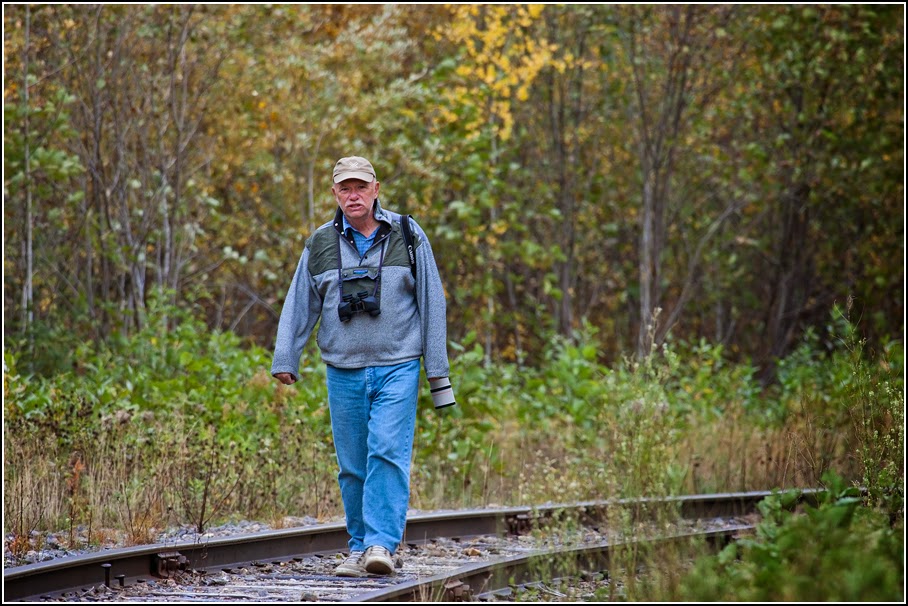 We stopped dead in our tracks when I noticed a small dark perch perching in a bush right beside us on the railway ties. On the ground beside it was a bright red and black bird with white wing bars - White-winged Crossbills! This was by far my best views of this usually difficult to see species. Usually the views are brief and backlit with birds feeding at the very tops of Spruce Trees. More photos to come of the pair!


It was a good day (especially for photography), though we still hadn't bagged a big time rarity on this trip. There were still 3 full days left, however...
Posted by Anonymous at 20:51