We left the Vinales area mid morning on February 12, our destination being Hacienda La Cortina in La Guira National Park. Hacienda La Cortina was the former estate home of a wealthy lawyer, Jose Manuel Cortina, throughout the 1920s and 1930s. The estate has now gone to ruin and taken over by the park, providing an accessible way for birders to see a handful of specialty birds, such as Olive-capped Warbler and Giant Kingbird. We spent a few hours before lunch here, along with a local guide.

The walk started slow bird wise, but we toured through the grounds and were taught the history of the hacienda, most of which I regrettably can't recall anymore!

New birds for the trip included a pair of Blue-gray Gnatcatchers as well as a couple of Green Herons along a swampy watercourse. A Louisiana Waterthrush called from somewhere along the edge of the ditch, and eventually great views were had of two different birds. We crossed a bridge over the watercourse, when someone in the group noticed these bullfrogs in the channel below us.


According to our guide we were likely here too late in the morning to see Giant Kingbirds, as they usually are much more reliable shortly after dawn. We did however find several other interesting birds, including a somewhat tame pair of Cuban Trogons, a single Cuban Tody, and some Western Spindalis. As we approached a stand of trees, we heard the song of the other specialty bird of the area. It took a while but eventually everybody had sufficient, if not excellent views of a small group of Olive-capped Warblers as they skirted amongst the branches directly above us. I was pretty happy to see this near-endemic as this would likely be our only shot of it during the trip. A short walk down the path and another little group of Olive-capped Warblers were found, as well as a Cuban Green Woodpecker at the same time. One Olive-capped Warbler was in much better light, allowing me to grab the record shot, below. The woodpecker was new for most of the group as only a few had seen the one on February 11. We ended the walk at La Cortina right around lunch time, having seen about 35 species during a surprisingly birdy few hours!


Our main stop in the afternoon was to visit Orquideario de Soroa, nestled on the side of a forested valley in the Sierra del Rosario moutains. We were given a tour of the gardens, which house over 25,000 orchid species in addition to 6000 other species of plants. Several Red-tailed Hawks soared overhead, and eventually the distinct call of a Cuban Trogon was heard. A quick search turned up the bird sitting quietly in the lower canopy of a tree, our best looks of the species yet. 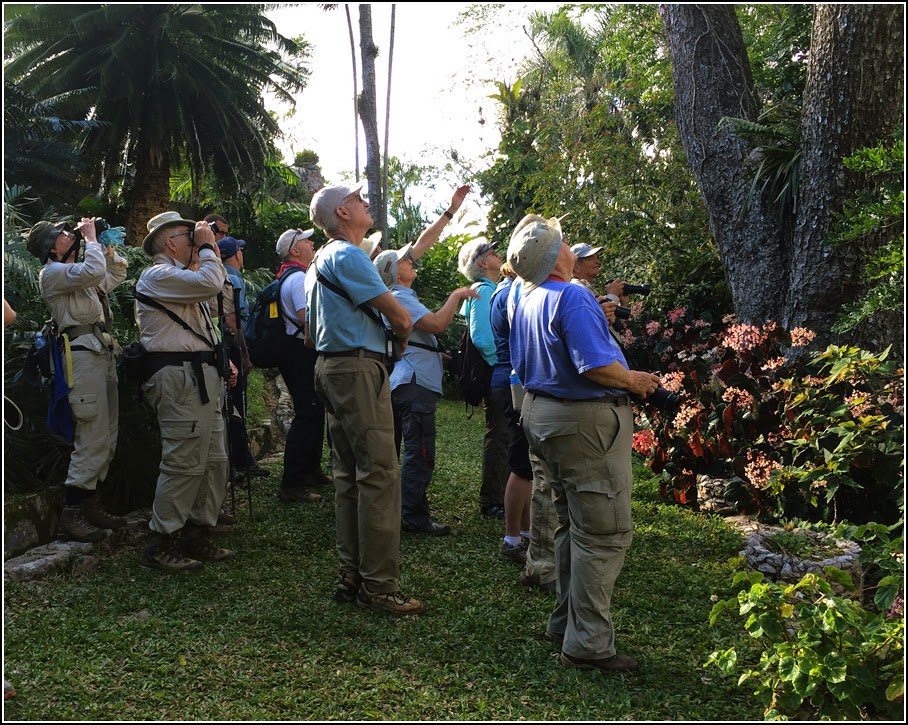 Not long after, I was near the back of the group when I heard an interesting chip note coming from some bushes. I hung back to check it out as it sounded an awful lot like a Cuban Grassquit (I had just been listening to their call on my phone about two minutes earlier!). Eventually I narrowed down the call's source, right to some palm branches where the bird sat still in plain view. The Grassquit remained for a few minutes, causing yet another interruption to the orchid talk given by the local guide, as everyone scrambled for a look. I think everyone in the group managed to see it before it disappeared over a fence.

Cuban Grassquits have been declining in numbers for years in central and western Cuba. This is principally due to trapping for the caged-bird trade, but also due to habitat loss through deforestation.


As we neared an open area overlooking the valley, several Red-tailed Hawks and a single Sharp-shinned Hawk soared overhead. The sharpie was of the local Cuban race, a year round resident that is found in afew areas in Cuba, one of which happens to be the area around Soroa.


An eye-level Cuban Emerald provided the best looks of the trip so far.

Our hotel in Soroa ended up being within sight of the orquideario, allowing lots of remaining daylight once we got everyone checked in. I walked around the grounds for an hour before sunset with a few of the keen birders in the group. This Cuban Kestrel was on patrol on a branch overhanging a public walkway.

We also discovered a little flock of warblers behind some of the buildings along a riparian corridor. Black-throated Blue and Black-throated Green were new for the trip, while several each of Northern Parula, American Redstart, and Palm Warbler were also noted.

Later that evening, Glenn and I tried to call in some owls before calling it a night. It only took a few minutes until we could hear the low hoots of a Bare-legged Owl across a roadway from the hotel grounds. A second Bare-legged responded, while we also heard some different hoots that we attributed to a Stygian Owl. It was a great way to end an awesome day in western Cuba.

Posted by Josh Vandermeulen at 22:08