Embalse El Yeso is a reservoir set high in Andes above Santiago, formed by the damming of the Rio Yeso. It has a capacity of a quarter billion cubic meters of water, serving as a major source of drinking water for the city of Santiago, especially during dry periods. Among birders, however, this area is well known as an accessible spot to search for the Diademed Sandpiper-Plover, a unique species of shorebird that is restricted to high Andean bogs. It also happens to be the only member of its genus, adding to its allure.

The sandpiper-plover was not the only bird on our minds this day. This would be our last chance at birding the Andes of central Chile; as a result there were quite a few species we "needed" to see here.

As we approached the reservoir early in the morning, we stopped periodically to scan and listen wherever there were tall rock faces. This is the preferred habitat of the Crag Chilia, one of the dozen or so bird species found only in Chile. We soon struck pay-dirt, finding two pairs of them scrambling over the boulders at the base of a rock face!


A pair of House Wrens shared territory with the Crag Chilias in this habitat. House Wren is a remarkable species that has managed to survive in a wide variety of habitats, from the southern tip of South America north to southern Canada.


But our gazes were fixed firmly on the chilias. This is a type of furnariid, meaning that it is in the same family as canesteros, horneros, cinclodes and earthcreepers, among other "ovenbirds". We enjoyed our fifteen minutes or so with this species, watching them effortlessly scouring the boulders for spiders or other insects to eat.

We continued on, stopping occasionally to identify whatever birds we came across. At one point, a Moustached Turca carrying a beak-full of grubs scurried across the road. I quickly stopped the vehicle and we managed to snap off a couple of photos through the open windows before the turca disappeared down the hillside, presumably to feed its young.


Later on, an Andean Fox also made an appearance! It was a little too close for my lens.


This Mourning Sierra-Finch posed nicely for us!


We climbed higher into the mountains, eventually reaching the reservoir. A rock-strewn grassy slope near the reservoir had come alive with birdsong! Among the species here were several new ones for us - Buff-winged Cinclodes, Sharp-billed Canestero, Rufous-naped and Black-fronted Ground-Tyrants.

The scenery was stunning high up in the mountains.

Some unusual calls drew our attention to several Gray-breasted Seedsnipes along the hillsides. This was a new bird family for all of us, comprised of four species limited to the Andes and Patagonia of southern South America. An interesting bird that seems to fill a similar ecological role to ptarmigans in the northern hemisphere.

Rufous-collared Sparrows are one of the more widespread bird species in the Americas, found in almost every habitat in Central America and South America. They were incredibly common in the area surrounding El Yeso, and we estimated we saw 150 or so during the morning. However, this remains one of only two photos I have of this species in my collection. The other photo is of a White-throated Caracara taken later in the trip, and much like this photo the sparrow is out of focus in that one as well. For better or for worse, common species like Rufous-collared Sparrows often get ignored in favor of more unusual species during birding trips like this one, where time is the limiting factor.


With most of our target species acquired, we began searching for suitable looking alpine bogs that might provide habitat for the crown jewel, the Diademed Sandpiper-Plover. The scenery was breathtaking! Occasional Andean Condors soared overhead throughout the coarse of the morning.


After several hours of hiking, we stopped to have a snack consisting of the terrible leftovers from the night before as well as copious amounts of sugar. Breakfast of champions. 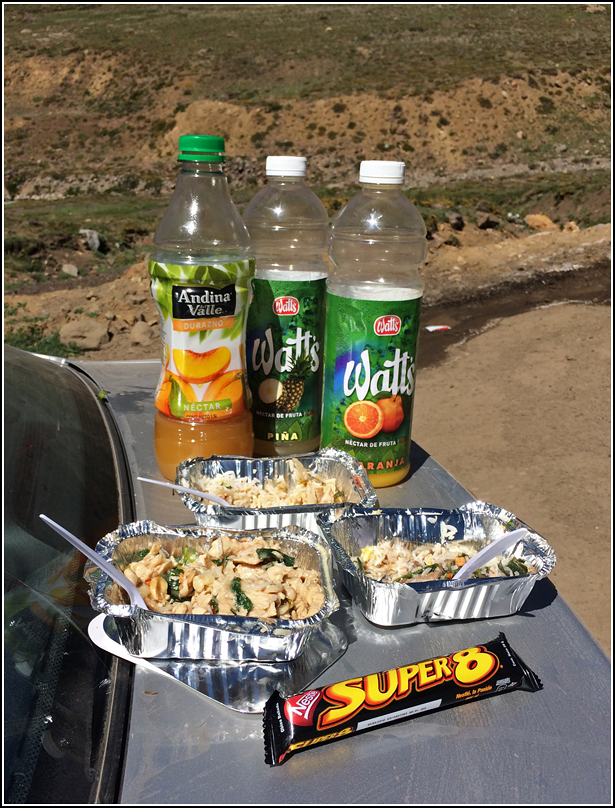 With time running out before we had to depart the mountains (our rental was due back in Santiago in the early afternoon), we ramped up the intensity of our search for the DSP. We returned to a promising looking wetland that we had passed earlier in the morning. And then it happened...


I think it was Adam who first spotted the dumpy little shorebird, hiding among the grasses of the bog. Awesome!!

Much of the next hour was spent with camera shutters firing, as we watched the beautiful shorebird go about its business. We were awestruck! As we crouched in the grasses it would walk right up to us.


It turns out that this individual had a recently fledged juvenile hiding in the grasses nearby! Unlike its parent, this one had yet to be captured and banded by the researchers studying this declining species, of which less than 7000 mature individuals remain in the wild.

For about an hour we crouched in the bog, studying these unique birds from a relatively close distance while taking care not to disturb them. We were soaked and muddy by the end, but it was worth it!

With the clock ticking, we eventually had to pull ourselves away from the DSPs and continue down the mountain. I gunned it on the mountain roads as fast as I could and we made it back to Santiago just in time to drop off the car. With our time birding the Santiago area now complete, we took a bus to the city and found a hostel near the train station. It felt amazing to have our first shower in a couple of days and to sit outside with some cold brews, hanging out with other young travelers from around the world and enjoying the warm evening. The following day we would be taking a bus further south to bird the Nothofagus forests home to Magellanic Woodpeckers.
Posted by Josh Vandermeulen at 08:40

Well, you're not having fun until you're wet and muddy!