Early April in southern Ontario is the ideal time to do two of my absolute favorite activities. The first is searching for amphibians, in particular Ambystomatid salamanders, as they migrate to and breed in ephemeral wetlands. The second activity is returning to a favored location where it is easy to see dozens of Northern Ribbonsnakes, Eastern Gartersnakes and other species as they bask on wooded hillsides near where they spent the previous winter hibernating within. Back on April 8/9 I had the opportunity to do both activities!

Saturday was a glorious warm, sunny day, and though Laura and I had plans earlier in the day, we decided to head down to our favorite set of ponds near Cambridge that evening. The temperature would be dropping to the low single digits overnight and rain was not in the forecast so we were not expecting to see the mass rush of Blue-spotted and Spotted Salamanders heading to the ponds. That being said, it was a nice night to be out and we had a lot of fun turning up some herps. Stepping out of the car, the chorus created by the Spring Peepers and Western Chorus Frogs was deafening, while the low, quacking calls of the Wood Frogs could also be heard if one was listening closely. 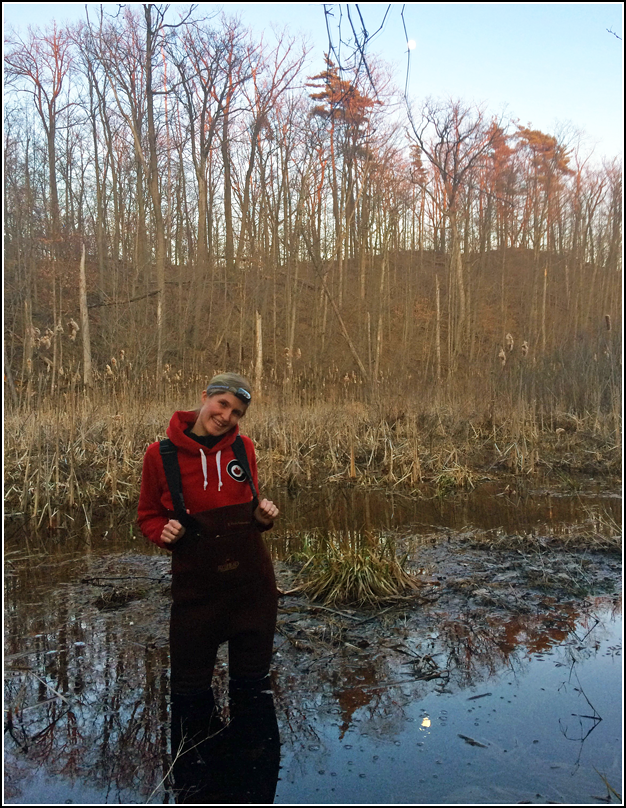 We spent a little bit of time searching for Four-toed Salamanders and eventually turned up two individuals. This diminutive species is one of my favorites and always a treat to see. While somewhat common in suitable habitat in Ontario, Four-toed Salamanders are rarely observed except by those searching specifically for this species. Unlike the much more common Red-backed Salamander that any naturalist in Ontario would be familiar with, a species which can be found in a variety of woodland habitats, Four-toed Salamanders are quite specialized in their habitat choices and prefer treed swamps with an abundance of sphagnum moss. The salamanders spend much of the year living inside clumps of moss, with females laying their clutch of eggs in a section of sphagnum overhanging a pool so that the freshly-hatched larvae can drop down into the water. I have occasionally found this species under logs and rocks throughout the forest, but most of my sightings involve individuals hiding within the sphagnum. One has to take care so as to not rip or dislodge chunks of moss when looking for this salamander as it is very easy to damage this type of habitat. I did not have my camera with me this time so here is a photo of one from a few years ago.


After our success with the Four-toed Salamanders we met up with a friend of ours from university, Pauline, who had recently moved back to Guelph after a stint in Winnipeg. The three of us explored a large pond that has been productive in the past. Even though the wetland was beginning to fill in and a few small fish were seen along the edges, salamanders were still breeding in the pond as numerous egg masses were visible. Most were from Spotted Salamanders but there were also a few from the Blue-spotted/Jefferson Salamander complex as well. Eastern Newts were quite commonly seen here; no doubt they prey on the numerous salamander eggs. While the frenzied rush of breeding had likely already occurred there were still a few salamanders in the wetland and we were happy to see a couple of Spotted Salamanders. Below is a photo of one from a few years back.


The following day I returned to the same area with Laura as well as my parents as it was forecast to be a warm, sunny afternoon; perfect for snaking!

Before beginning our hike we went for a drive to see if we could turn up any interesting birds in the nearby fields. Great looks were had of a pair of Eastern Bluebirds, a favorite of my mom's, but the highlight was this pair of Sandhill Cranes that were content to forage on a lawn not far from us.


Upon our arrival it was evident that it would be a perfect day to find snakes and it did not take long before we came across our first few rustlers, easily audible from several meters away. Finding snakes is as much about listening as it is seeing, especially in a forest carpeted with dead, crispy leaves this time of year!

This particular woodland is home to about equal numbers of Eastern Gartersnakes and Northern Ribbonsnakes. While most people in southern Ontario are quite familiar with Eastern Gartersnake, the latter is a species at risk that is more restricted in its habitat preferences.

The Northern Ribbonsnakes at this site prefer to spend their summers in several large wetlands, but they appear to hibernate in certain wooded hillsides surrounding the wetlands. In early spring it is easy to see a dozen or more in an hour, if you pick a suitable hillside with ample hibernacula opportunities and a southwest facing slope. This one we spotted before it spotted us, allowing a stealthy approach. It happened to be coiled in a very photogenic position and remained there for a few minutes while we photographed it.


Occasionally one can find Dekay's Brownsnake or Northern Redbelly Snake at this site, especially during early spring when they are more likely to be discovered out and about. Mom made a great spot with this tiny redbelly, moving through the leaf litter. 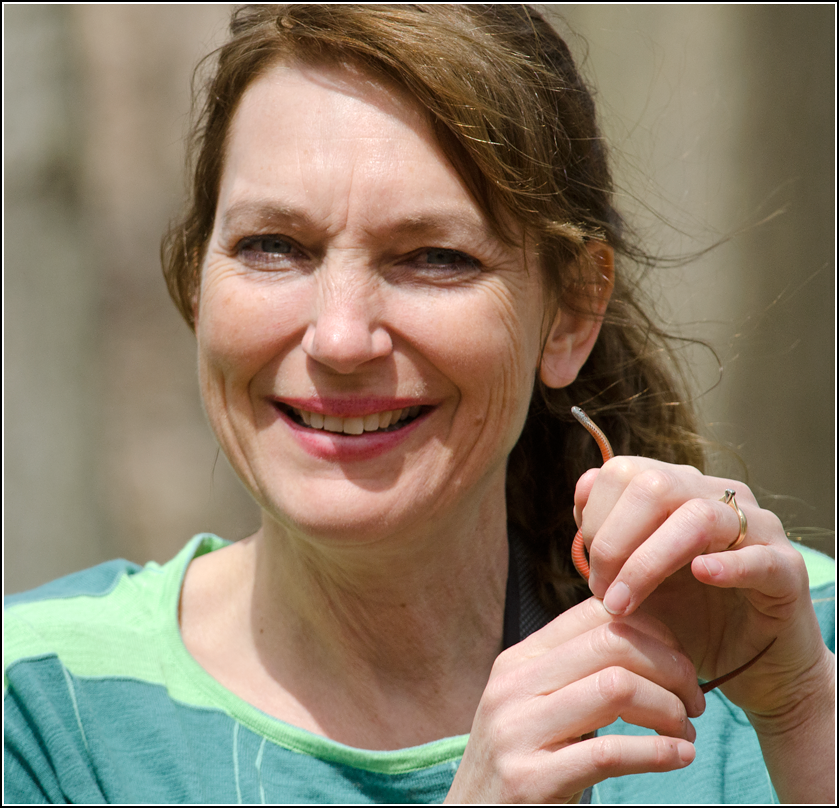 Many of the woodland wildflowers bloom in April and May, before the profusion of new green leaves in the canopy later in the spring limit the amount of sunlight that filters to the ground.


Several of the vernal ponds were alive with the odd quacking calls of Wood Frogs. Wood Frogs are one of the earliest amphibians to become active in the spring and they are likely the quickest to wrap up their breeding activities. While other early spring breeding species like Western Chorus Frog and Spring Peeper will call into late spring and even early summer, Wood Frogs usually go silent by the middle or end of April; their sprawling, globular egg masses the only remaining evidence of their presence.

Several butteflies were flitting around - about even numbers of Mourning Cloaks and Eastern Commas.


Birds were few and far between on this spring day as our attention was focused elsewhere, though occasional individuals were identified. Ruby-crowned Kinglets and Brown Creepers were in full song; nice to hear after a long winter! 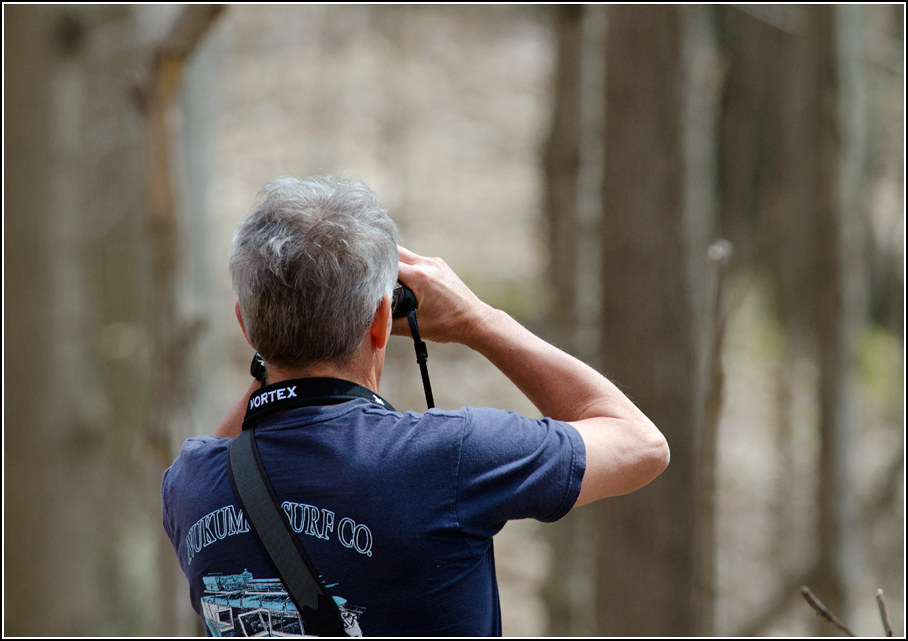 It was an awesome spring weekend with some of my favorite people!
Posted by Josh Vandermeulen at 18:46