Fish Crow has been suspected as a breeding bird in Ontario for a few years, but a successful nesting has not yet been confirmed in the province as far as I am aware. A Fish Crow nest was identified in Oakville a couple of years ago, but the nest failed if I recall correctly. While I am still waiting to find an active nest in the Niagara area, on August 2 I was able to confirm the presence of recently fledged young at my house in Niagara Falls. The distinctive nasally calls of Fish Crows drew my attention outside during the afternoon where I discovered four individuals calling and perching on a hydro wire in front of my house. After observing them it became apparent that two of the individuals were hatch-year birds due to the presence of fleshy gapes, and the fact that they were begging from the two adults.

While this sighting alone doesn't confirm an Ontario nesting, as in theory the young birds could have been born across the river in New York, it does provide another piece of evidence of the slow expansion of Fish Crow into Ontario via the Niagara peninsula. Willie D'Anna indicated to me in an email that this provides the first confirmed nesting record for the Buffalo Ornithological Society area, which includes much of Western New York and the Niagara Peninsula. This image shows three of the four birds, including hatch-year birds in the front and rear, and one of the presumed parents in the middle. 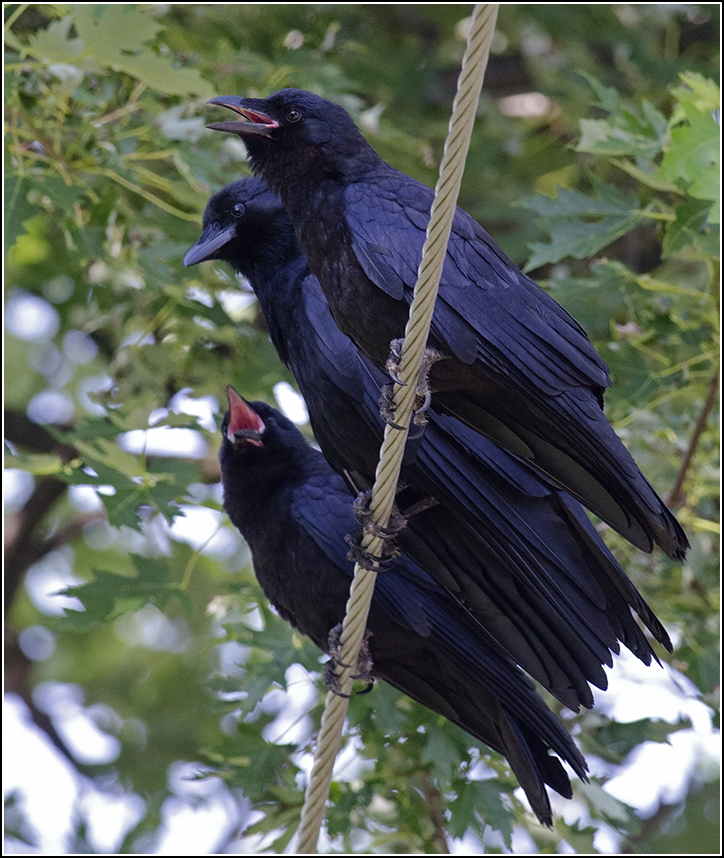 Dominic Cormier and Lena Ware were in my neck of the woods on August 4 and one of their goals was to catch up with a Fish Crow which would be a new Canada species for both of them. We tried driving around parts of St Catharines and Niagara Falls where I had seen Fish Crows before, without any luck. By 8:00 PM we swung by the Fairview Cemetery in Niagara Falls. I had observed a large group of crows (including many Fish Crows) roosting in the cemetery on July 21, and it was our hope that a repeat performance would occur. Sure enough we quickly found a big group of crows and the distinctive calls of Fish Crows could be heard as I brought the vehicle to a stop. Below is a video of most of the flock.


As you can tell from the video this flock consisted almost entirely of Fish Crows - in fact we were only able to confirm a handful of American Crows present. All told we estimated that at least 55 Fish Crows were a part of the flock. Considering that the Niagara Region only had its first Fish Crow record in 2012, seeing this many in one spot was quite the spectacle, and a nice introduction to Canadian Fish Crows for Dom and Lena!
Posted by Josh Vandermeulen at 10:08