Life has been busy since my return from Borneo and Bali and I haven't had much of a chance to do any birding in the two weeks since my return. This week was particularly heavy, work-wise, but I managed to push a few big reports out the door and have a bit of a lighter schedule coming up, so hopefully I will be able to devote more time to birding in southwestern Ontario! I made sure that my schedule for Saturday remained clear, and given the forecast for moderate east winds picking up through the day, a visit to Van Wagner's Beach was in order.

Van Wagner's Beach is a well known location to pretty much any birder in southern Ontario. Due to its location on the far western end of Lake Ontario, migrant species present on the lake sometimes fly past during ideal weather conditions, such as during north, northeast or east winds in the autumn. Sometimes the various waterbird species migrating between James Bay and the Atlantic coast make a stopover on Lake Ontario; these are the birds that we are hoping to see at Van Wagner's! Given the time of year, I was hoping for Parasitic and Pomarine Jaeger, Black-legged Kittiwake, Red-throated Loons and maybe some Brant.

Only a few other birders were there upon my arrival at 9:00 AM including some familiar faces. The first few hours of the morning were quite productive though no rarities showed. I was really enjoying getting back into waterbird identification as I was a little out of practice! Lots of birds were on the move, namely scoters, Common Goldeneye, and Long-tailed Ducks, along with mixed flocks of dabbling ducks. It was a great day for loon migration and at any given point a loon was visible, somewhere over the water. A handful of distant Red-throated Loons were also seen, the harbingers of many more slated to come through this month.

Around 10:00 AM I spotted a Black-legged Kittiwake that was nearly upon us, only a few meters offshore and coming in hot and heavy from the west. Fortunately I had stepped back from my scope or else I surely would have missed this bird too! We all enjoyed the fantastic views as it cruised past, continuing down the beach.I was a little slow to the draw with my camera but eventually fired off a few photos as it flew directly away. 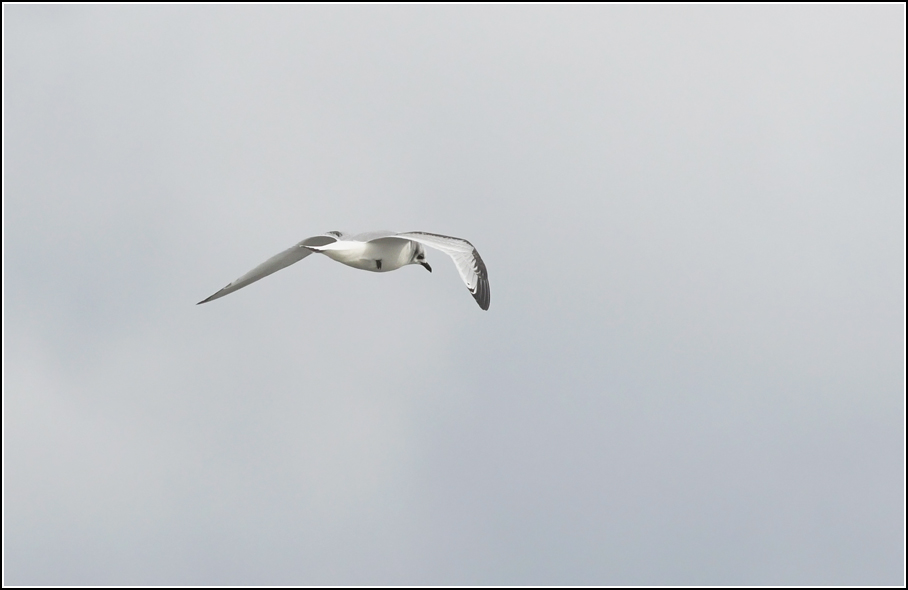 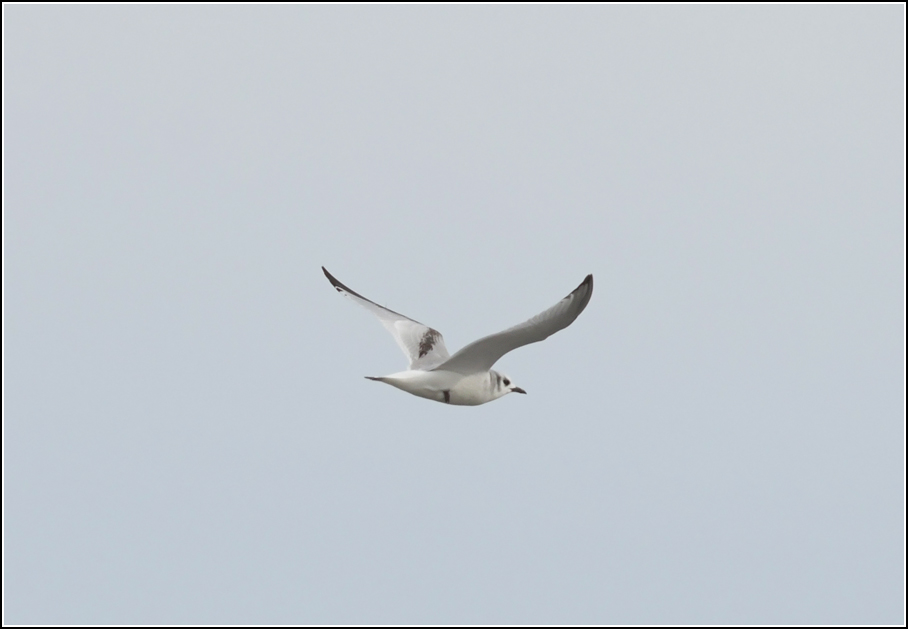 The next great bird came only a few minutes after the kittiwake. A small jaeger also flew down the beach, so close that we all could have easily missed it as well if we were looking through our scopes. Upon seeing the jaeger a few things were apparent - it lacked the warm tones associated with Parasitic Jaeger, exhibited a heavily barred undertail and uppertail coverts, and flew with the typical bouncy flight of Long-tailed Jaeger. Fortunately my camera was resting on the bench in front of me and after the kittiwake fly-by I was a little more prepared. It helped that the jaeger flew slowly down the beach, allowing Jeremy Bensette and I to snap a handful of photos as it drifted past, mere meters away. Looking at the photos the consensus among the group was that it was a juvenile Long-tailed Jaeger. Long-tailed is generally thought of as an earlier migrant, and each autumn a handful of individuals are seen from late August through September, with occasional records from October as well. There are only a couple of previous November records for Ontario, and this may be one of the latest for the province.


Some of the features that identify this bird as a juvenile Long-tailed Jaeger include the following:


The rest of the day was awesome - more Black-legged Kittiwake sightings, a Brant, decent numbers of ducks and other waterbirds and even some shorebirds. A flock of 12 Dunlins went by during the mid-morning, while a single White-rumped Sandpiper and two Sanderlings were also seen during my watch.

These two birds are both juvenile birds undergoing their first pre-basic molt. The dark brown and white juvenile feathers on the wings are being replaced with plain gray feathers. These new gray feathers are easily seen on the scapular (back) feathers, while a few have also come in on the wing coverts.


By early afternoon I left to drive back to Niagara as I was hoping to catch up with a Franklin's Gull that had been found by Marcie Jacklin along the Niagara River in Fort Erie. She had observed the bird for three days in a row, including earlier in the morning. Unfortunately I couldn't dig it up, but I did enjoy taking some photos of some Bonaparte's Gulls that were actively feeding. Speaking of which - they have recently invaded the Niagara River in big numbers. My last stop at the Control Gates above the Falls was productive, as thousands were present. An adult Little Gull was mixed in with them, as was an individual that still showed a complete hood. We often get one or two of these each winter on the river.

One of the locations that I checked in my attempt to find the Franklin's Gull was the Catherine Street parking lot along the Niagara River in Fort Erie. Migrant Horned Grebes have also appeared on the river, and just from one location I counted 24 here - no doubt several others were underwater when I scanned their portion of the river. This individual was one of two that popped up in the shallows a few meters from where I was standing on the bank. After two quick photos they both slipped underwater, reappearing a minute later, but now 30 meters away.


I'll finish with a few photos of some Bonaparte's Gulls, a Little Gull and a Common Tern, both seen two days ago from the end of the Port Weller east pier. Common Terns are still sticking around - I've seen three in the past two days. While most clear out of the province in Sept/Oct, we often see a few hanging around on the Niagara River until mid November.

Posted by Josh Vandermeulen at 11:24

I should've been there! I wish I didn't have other things going on!

Well, at least I was able to give the heads up to a few of my friends, who were able to see some awesome things!

Yeah, thanks again for that heads up Quinten! Too bad I missed that Long-tailed Jaeger by only a few minutes though, well you can't get them all right? Maybe next year Quinten ;)
That Long-tailed is a great record, and great pictures of it too Josh!

An excellent series of shots, Josh.....you obviously had a fantastic day.