Last weekend, Dan Riley and I explored some parts of Algonquin Provincial Park. We both had early morning breeding bird surveys scheduled on Friday - Dan in Goderich, myself in North Bay - and we planned on meeting in Huntsville sometime in the early afternoon to begin our weekend. With both of us having work commitments on the following Monday it would be a quick and dirty trip, exploring several interesting areas of Algonquin Provincial Park.


One of our main targets for the weekend was to find a Northern Two-lined Salamander. While widespread throughout the southern Canadian Shield portions of Ontario, they are not always easy to find, and it was a species that Dan had never seen in the province. We checked out a location near Bat Lake on Friday afternoon and easily turned up a couple individuals in a small tributary that flowed into a larger creek.


Later in the day I noticed this moose not far off the road, munching on the cattail tubers. Swamp donkeys are always fun to come across, especially when they stick around for photos.

A brief stop at a roadside wetland on the east side of Algonquin produced a dozen species of singing birds, along with many Gray Treefrogs and Mink Frogs. The chuckling of Mink Frogs is one of my favourite summer sounds in the boreal forest.

For the next two evenings, we fell asleep to the yodels of Common Loons and the repetitive but soothing calls of distant Eastern Whip-poor-wills at the Achray Campground in the eastern part of Algonquin. We absolutely loved our time here and highly recommend the Achray campground! It was peaceful and quiet, other than the incessant buzzing of mosquitoes in the evenings. Fortunately we came well prepared and put our bug jackets to good use.

One of the reasons we decided to visit the east side of Algonquin was that the calendar said that it was early June in an even-numbered year. You may ask why would the year have any bearing on what we would see?  The answer of course is that certain species of butterflies take two years to complete their life cycle and as a result, adults only fly every other year. Macoun's Arctic is one such species, with different populations flying during either odd or even numbered years. Found discontinuously throughout the central Canadian boreal forest/taiga, one of the most accessible populations for southern Ontario butterfly watchers is the Jack Pine stands in the eastern part of Algonquin. In Algonquin, much like the rest of their Ontario range, Macoun's Arctic is an even-year flier. It was a species neither Dan nor I had ever seen before. Early June is prime time to find Macoun's Arctic and we hoped that if we walked the edges of suitable Jack Pine forest, their preferred habitat, we would turn some up.

It took a bit of time but we were successful, scaring up two Macoun's Arctics on Saturday. Ontario's largest arctic, Macoun's looks somewhat like a fritillary or an overly large crescent in flight, due to the excessive orange on the top surface of the wings. Both individuals that we discovered were hard to approach closely, but we did have great views and managed some documentation-style photos where they had their wings closed, hiding the orange.


While wandering the Jack Pine forests the most frequently encountered butterfly was the Eastern Pine Elfin. Their flight season is starting to wind down, and many individuals were quite worn, but some were a little fresher looking.


I enjoyed watching them as we walked, as previously I had only observed Eastern Pine Elfin once, at Sandy Lake Road in Peterborough County a few weeks ago. Considering how common they appear to be in suitable habitat along the Canadian Shield, I really am surprised how I never encountered them before. Of course now that I have their "search image" burned in my brain I won't be missing so many of them in the future (I hope!).

This elfin was worn enough that identifying it was a little bit more difficult. It may be a Hoary Elfin, but I'm not sure.


This Gray Hairstreak was a nice surprise along the Barron Canyon Road. Previously the only Gray Hairstreaks I had seen in the province were migrants in Essex County (including over 60 in a day!), but I had never seen the resident population in eastern Ontario before.


Dragonflies and dragonflies were frequently seen and it made me wish I had brought a net along! This is a Twin-spotted Spiketail, while the next is a female Hudsonian Whiteface.

On the Sunday most of the day was eaten up by the long drive home, but we did make a few stops along the way. The first was a location where Kirtland's Warblers have bred in the past, though we were unable to turn any up this time. Given the amount of suitable habitat it is conceivable that they could be present elsewhere in the general vicinity.

While searching for the Kirtland's Warblers we kept getting distracted by insects. Eastern Pine Elfins of course were easily found, while we also stopped to photograph a Silver-bordered Fritillary, Dreamy and Juvenal's Duskywings and a variety of dragonflies and moths.

For a few hours in the afternoon we walked the Arowhon Road rail bed. We were hoping to see a Western Pine Elfin since the species can usually be found here in the spring. Unfortunately we did not have much luck with many butterflies at all, and not one elfin was seen. However we did photograph some of the Oblique-lined Tiger Beetles, a Juvenal's Duskywing, Silvery Blue, and a Wood Frog. We also discovered a pair of Olive-sided Flycatchers and enjoyed watching the pair interacting. 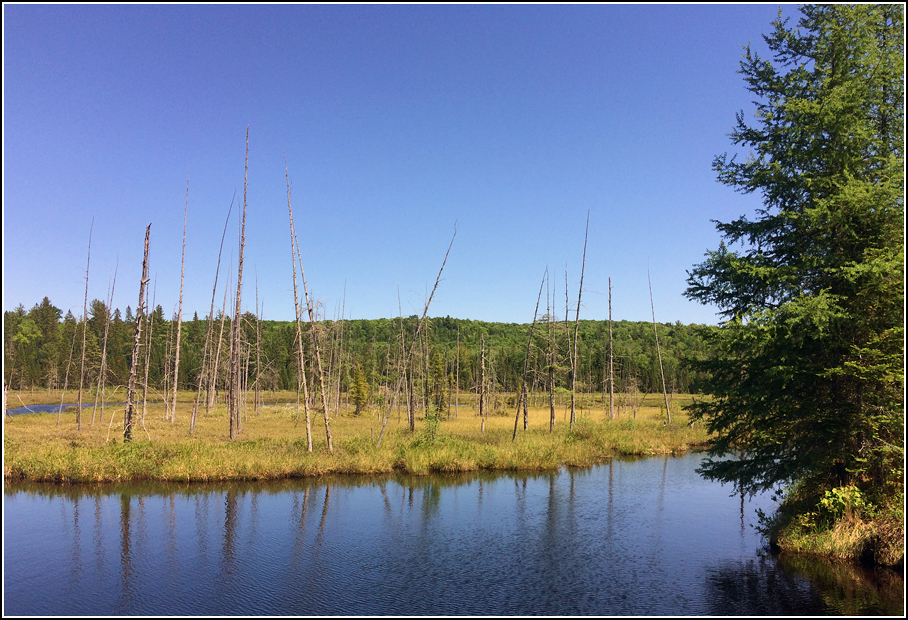 It was great to get away for a weekend, in a beautiful part of our province. I can't wait to get back out there again.

Posted by Josh Vandermeulen at 11:45