Even a big year birder takes a bit of time off from the birds every now and then. For the last 4 weeks I have been working steadily with very little time off for recreational birding. Mind you for some of those weeks I was getting paid to do bird surveys in Rainy River of all places, a location where I picked up 4 rather crucial year birds. The last week I have been in the office and I shall remain there for a little bit longer. This is a slow time of year, and though I would like to spend all year birding, I need to finance it as well! In just over 2 weeks, however, I leave on a helicopter to the southwest coast of James Bay to do Red Knot surveys, but more on that later!

In the meantime, I thought that I would take advantage of this slow time of year to catch up on posting about a major birding trip I took to the American southwest last winter. With no further ado...


Back in February of 2011 I went on an epic adventure with three good buddies. The place was the southwestern United States, and the goal was to see birds, herps, insects, mammals, the desert, the mountains, the ocean, and cool local restaurants. But mostly, birds.

The planning had been done the previous autumn as I was keen on going on a trip somewhere over my February reading week at school. Brett Fried, a birder from Cambridge and a friend who I’ve known for a couple of years, was game right from the start, so we planned on Costa Rica. Unfortunately for us the flight tickets doubled in price the day before we were going to order them so we started thinking of other possibilities.  David Bell, a Sault-Ste-Marie birder who also attends the University of Guelph, was keen on going, and he mentioned southern California and Arizona. It didn’t take much to get my buddy Matt Strimas-Mackey, another U of G student, to commit to the trip. I think our conversation went something like “Hey, do you want to go to Cali with us next month?” “Yeah sure, I’m in!” And so the trip was a go.
Dave planned most of the itinerary and Matt got the rental car (with full insurance cause we were going to beat it to shit!) and accommodations ready. Before we knew it, the day had arrived!

Matt Strimas-Mackey: Matt had many nicknames by the end of the trip, such as Mr. U-turn (he made exactly 307 of them this trip and the guy with no respect for stop signs or red lights. Check out that intense look!

David Bell: a.k.a. trip planner extraordinaire. He could tell you exactly what species we could find at every single location we might go to on this trip, straight from memory. And 99.9% of the time, he was right! Except when he said that Mountain Plovers exist - we actually found out later in the trip that they don't.

Brett Fried: a.k.a. the guy we brought along to help pay for gas and to be the butt end of our jokes. Well, he also has a pretty sweet scope.

February 19, 2011
I picked up David and Matt and by 12:30 we were on our way. After a bit of a detour and great views of a Bald Eagle we arrived at Brett’s place, and from there left to go to Detroit. On the drive, we had our only Tundra Swans of the trip (perhaps newly arrived migrants). We crossed the border, went to the Park and Fly, and arrived at the airport. The guys got on their flight OK but it turned out that I was with a different airline, so I had to take another shuttle to the other terminal. Finally, we were off! My plane was a dinky little plane with about 40 seats. I arrived in Chicago, gave Laura a quick call, and hopped on my plane to LA. On the flight, I had a nice chat with a lawyer from LA and a college student from Detroit. I only got about 30 minutes of sleep, and after a while we touched down in LA. After a bit of confusion I saw the guys in the rental van while they were driving around looking for the hostel. They picked me up, we had some amazing food at In n Out, and had a hell of a time finding the hostel. Finally we arrived but at this point it was 2:00 AM. We were going to leave to start our big day at 3:00, so our 55$ for the hostel was spent sitting around in the room and making use of the free wifi.

February 20, 2011.
Our big day in Los Angeles county! We picked up John Garrett, a student in grade 12 who knew the area well as well as a phenomenal birder. Upon meeting him at his house he said that the mountains were closed due to heavy snow. Great.... So instead of starting the big day with Spotted Owls, the best we could do was drive up the foothills for some semi-montane species.

Needless to say, we could see why the mountains were closed. There was about 8 inches of snow everywhere and the roads were slick. We ended up getting lost about 3 times but finally the sun rose and we were kind of in the right area. The first Cali bird = a flock of Western Bluebirds off in the distance.

In short order we saw Red-tailed Hawk, Common Raven, and White-crowned Sparrow (ended up being the most common bird of the trip, most likely). At this point the air temperature was 20 degrees Fahrenheit but as the morning wore on, the sun came out and warmed things up to the balmy temperature of 32 degrees Fahrenheit. Ah, spring break in southern California!

The birds were slow to come, but eventually they woke up and we found them. California Quail, Lincoln’s Sparrows, Red-shouldered Hawks, and Oak Titmice graced our binocular views in short order along with some other expected foothills species. It was exciting to be in a completely new area – even Black Phoebes (they ended up being insanely common on this trip) were a lifer so we stopped to view the first one for quite some time. Fortunately John humoured the idiots from Canada and let us stop to appreciate the common southwestern species for the first time.

Before long we hit up the desert, picking up things like Loggerhead Shrike and some ducks (Common Goldeneye, Bufflehead, etc) near an impoundment. The highlight of the day was when we hiked along a wash in the Antelope valley. Dave had a great find with 2 LeConte’s thashers! These had been previously found by others, but it was still satisfying to relocate this difficult species. 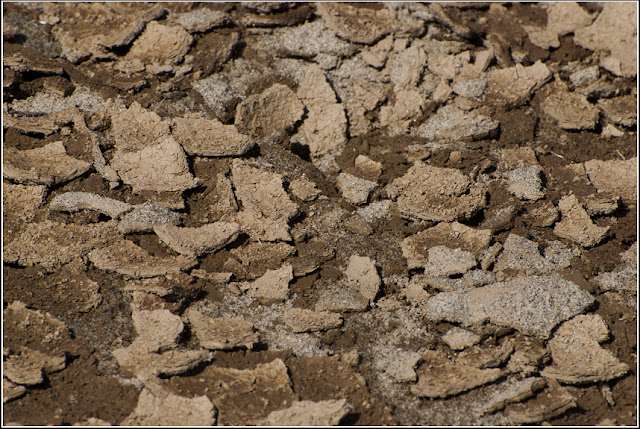 Another highlight from the Antelope valley was this scenic piece of concrete. Unfortunately a pesky Burrowing Owl kept getting in my photo.

The Antelope Valley is where our epic Mountain Plover saga began. And I don’t take the words “epic” and “saga” very lightly!   John thought they would be pretty much guaranteed at one spot, but we couldn’t turn them up (a dark-morph Ferruginous Hawk was a nice consolation prize, however). This was the theme of the trip – everywhere we went, we couldn’t turn up the stupid Mountain Plovers, a.k.a. Dirtpipers, a.k.a. Colorado Dirt Plovers. We are pretty sure they are extinct. The American Coot below was the closest we got to them.

Brett, Matt and I had picked up a fair number of lifers, but the big day wasn’t as big as we had hoped at this point. It was already noon and we were only at about 65 species. There was still hope, however, as we hadn’t done any birding near the coast yet. The next stop, Lake Palmdale, was quite productive and just the type of stop one needs on a big day....Get in, see the birds, and get out without f*cking around too much. The location was essentially a city park/pond in the middle of the Antelope Valley where a Greater White-fronted Goose and Ross’s Goose were supposedly over-wintering. Without too much trouble we relocated these super tame geese hanging out with all the mutants, as well as a surprise Snow Goose.

We had a pile of waterfowl and our first Violet-green Swallows of the trip here. A couple more stops at various lakes to pick up odds and ends, and by late afternoon we found ourselves on the coast. Bird 100 of the day was a Forster’s Tern. Along the cliffs we had decent views at a number of gull species as well as Western, Eared, and Clarke’s Grebes.

We raced along to the coast, with John seeing a Cassin’s Kingbird on the wire, and arrived at Malibu lagoon with about an hour or two of light left. A highlight for me here was getting my lifer Snowy Plovers, and some killer photos of them to boot.

Also seen here were good looks at Glaucous-winged and Mew Gulls, and a few other shorebirds and waterfowl. We had brief looks at an Allen’s Hummingbird as well. Our plan from here was to race to the Spotted Dove location to close out the day, but we were stuck in traffic, adding only Marbled Godwit (there was a flock on a beach).

The Spotted Doves would have to wait til the end of the trip! Instead, we tried for Western Screech Owl at John’s neighbourhood in Pasadena after dark. We do remember hearing them and eventually having great looks at them, but we were also running on about 5 minutes of sleep in the past 2 days so we might just have been hallucinating.  Anyways, the owls were a  sweet way to end to the big day and species number 123. This was a lot less than our goal of 150, but still not too bad for a bunch of Easterners who were beyond the point of exhaustion. Somehow we managed to drive to San Diego without falling asleep at the wheel that night, rolled into our motel, and crashed.
Posted by Anonymous at 21:49

Whoops, typo! *Spoiler alert* must have had what we saw a few days later in AZ on my mind...