Back from Netitishi point - 2013 edition!

This afternoon our helicopter arrived right on time, and within an hour we were at the hotel room. It always is a bit of a surprise to return back to civilization, to eat non-camp food, to see other people, and to not have to build a fire if you need to warm up.I must admit, it is kind of nice to be sitting here in the warmth of the motel room, but it won't be long until I will be missing the northern woods and James Bay coast. But anyways, on to the sightings!

Unlike last year where we seemed to hit the jackpot with rarities, this trip was a bit of a letdown. Additionally, numbers of migrating waterbirds were way down compared to last year, apparently with many species having already migrated through. However, as is always the case for Netitishi Point, we had some noteworthy sightings!

Townsend's Solitaire - October 31, 2013
As we were eating lunch one day, I was surprised to see a medium-sized bird land at the top of a Tamarack at the far end of the marsh. A few quick record shots and a brief look through the binoculars confirmed my suspicions - a Townsend's Solitaire! Alan and I had only a few seconds to view it before it disappeared, but we re-found it about half an hour later and were treated to great looks from only a few meters away. This is the first record for the Southern James Bay Region, and also the first record for Cochrane District. Photos to come!

Harlequin Duck - October 28, 2013
An immature male first spotted by Alan moving west right along the shoreline. There are only three previous records of Harlequin Ducks for Cochrane District, however two of those records involved birds that Alan and I saw last year!

Late shorebirds
We had several notable records of late shorebirds, including the following:
-12 Hudsonian Godwits were seen between October 28 and October 30
-a Semipalmated Sandpiper with a bad leg was out on the mud flats on October 26, 2013. Crazy late! To top that, we had a different SESA the following day.
-an adult American Golden-plover in breeding plumage was around on October 27, and we continued seeing juveniles until November 1
-an adult Black-bellied Plover in breeding plumage was last seen on October 28
-two Least Sandpipers were seen on October 29

Gyrfalcons
One of the most spectacular wildlife experiences that I have experienced in a while occurred when a white morph Gyrfalcon buzzed us on October 30. It ended up making several passes at us, and alighted on a spruce twice, allowing prolonged views. The lighting was perfect, the bird was immaculate, and I was stoked to finally nail down some photos of my #1 wanted bird! Here is one "teaser" photo - lots more to come. It looks better full size! 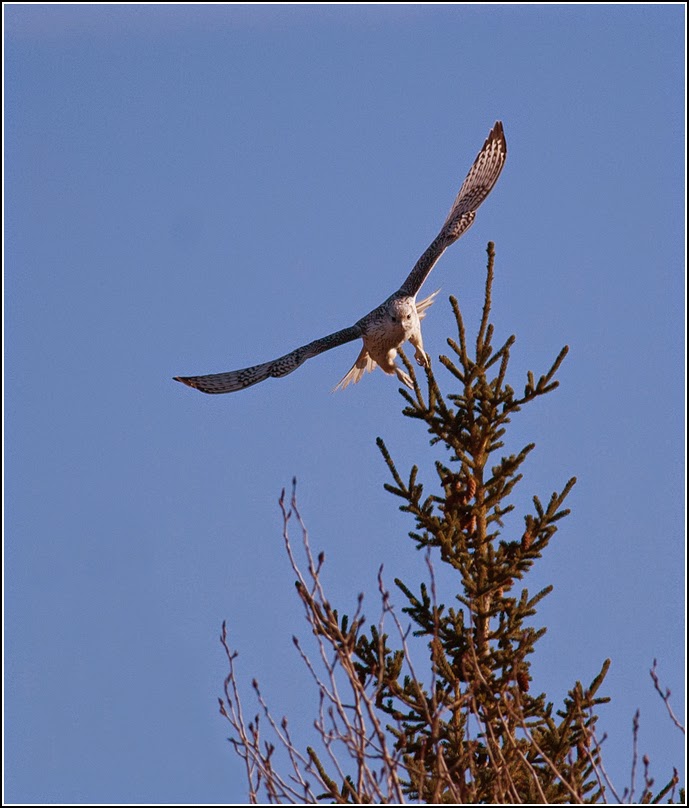 Typical northern birds
Some of the more common birds around the camp were Spruce Grouse, White-winged Crossbill, Gray Jay, Boreal Chickadee, and Pine Grosbeak. One of the things I love about Netitishi...
Posted by Anonymous at 21:45

Plus the Semipalmated Sandpiper that I saw alone on October 31 -- a crazy record-late date for southern James Bay.

Oops! I'm using Josh's computer but its actually me (AW) who is making these comments!