You may recall the interesting gull that several of us found at Niagara Falls on Saturday, November 23, 2013. I talked about it extensively here....

At the time, several birders/fanatical gullers pronounced the bird a graellsi Lesser Black-backed Gull (LBBG) and that seemed to be the consensus. However, after additional photos were circulated and extensive dialogue among many birders continued, the tide seemed to shift and Yellow-legged Gull YLGU) remained a possibility, as did Lesser Black-backed Gull x American Herring Gull (AHGU).

Yesterday the interesting gull made a second appearance to gullers on the Niagara River and several people were able to obtain good quality photos. Jean Iron has some posted on her blog here. Willie D'Anna has posted some photos on his Flickr page here.

I won't go over every single ID feature at the time, but thought I would mention a few characters that are present on this bird.

Mantle colour: Intermediate between AHGU and LBBG, though slightly closer to AHGU. Mantle shows no evidence of brownish tones, a feature which is often seen on LBBG

Legs: Bright yellow, no hint of pink like most LBBG x AHGU

Orbital Ring: appeared red in the field, though it was not as bright as it would be on a breeding plumage YLGU or LBBG

Primary pattern: short P9 and P10, indicating that the bird is still growing them in. This is also to blame why the bird has less extensive black on the wingtip than what is normal for a YLGU. Small mirror on P10, no mirrors on any other primaries, narrow subapical bar on P5, and a small black spot on P4. This wingtip pattern, to me, looks like it could fit either YLGU or LBBG, but it is hard to tell with the two outer primaries still growing in. 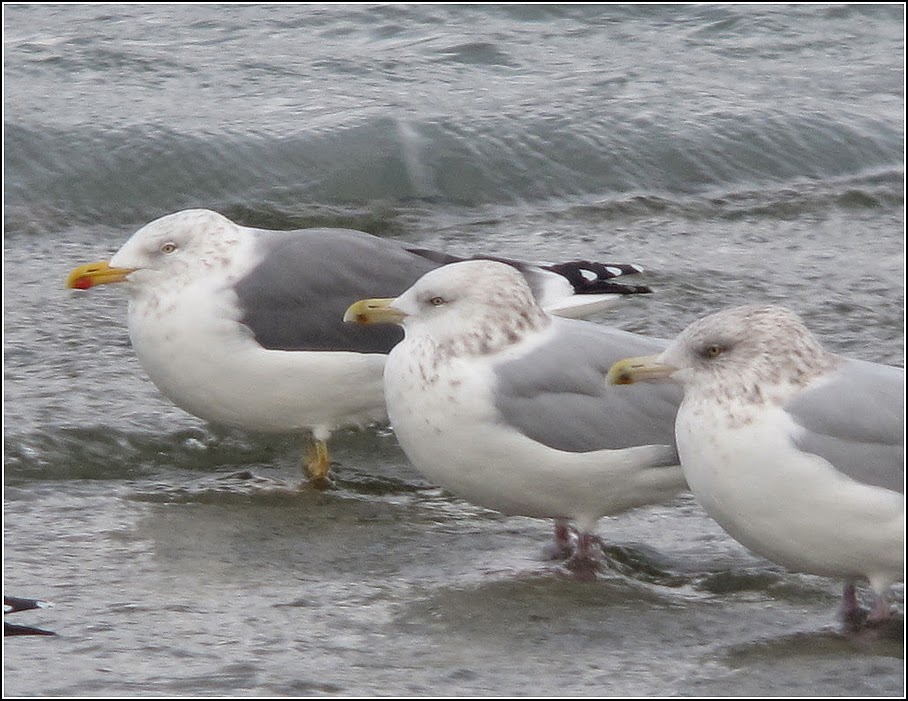 Size/structure: About the same size as a AHGU, though perhaps a touch smaller. Some observers though it appeared longer legged than nearby LBBG (I did not notice this in the field, though). Did not appear "long-winged" like one would expect in a LBBG, however that was because primaries P9 and P10 were not finished growing

At the moment, only two characters appear out of odds with an atlantis YLGU: the light streaking on the head, neck, and upper breast, and the molt timing. YLGU should have the streaking restricted to the head, with the heaviest streaking around the eye. Apparently streaking should never extend onto the neck and lower breast. In doing some research, several photos have emerged of YLGUs with streaking extending well onto the hind nape and onto the throat. Check out this bad boy!!!. At any rate, while still a very useful ID feature, there are some exceptions to the rule.

I am not sure what to make of the molt timing. LBBG can be a late molter, and the YLGUs they get in Newfoundland have completed their primary molt by October.


Personally, I am not convinced at this point in time that this is a YLGU. I think the most likely scenario is that it is a hybrid that very closely mimics a YLGU. After looking at hundreds of images of Yellow-legged Gulls, presumed hybrids, and LBBGs, I just don't get a YLGU "feel" from this bird. It is hard to quantify why that is, but I think it has to do with the head shape, for one. Obviously the head streaking appears to be a red flag and the molt timing is off for a typical atlantis YLGU in North America. We are still receiving feedback, especially from European birders who are more familiar with the local races of Herring, Lesser Black-backed, and Yellow-legged Gulls. 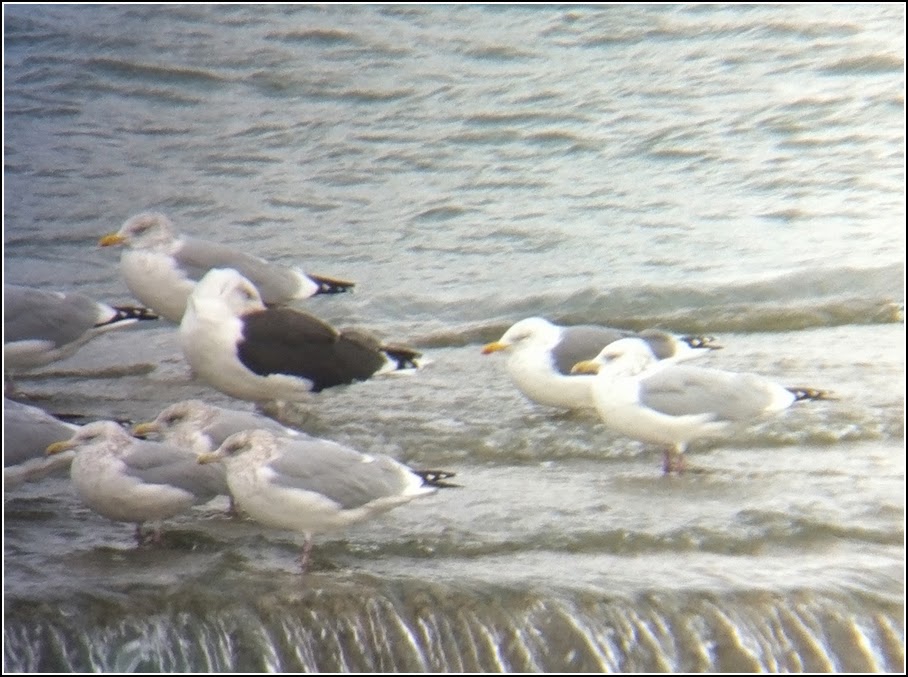 I'll close with the following quotes from various birders and gull experts who weighed in on this bird, though I'll leave their names out.

"The number of characters for which the bird shows an absence of any notion of intermediacy betweensmithsonianus (referring to Herring Gull)and fuscus (referring to Lesser Black-backed Gull)is definitely becoming most impressive to me.">

"The question that arises too, is can the make-up of the head streaking be considered as being diagnostically incorrect for YLG or can this be a case of individual variation within the species, albeit an uncommon one? Moreover, can the possible variance of this one plumage character overcome the suite of features, as you have spelled out, that point to a pure YLG? To further, where are the intermediate characters on the Niagara gull that we associate with at least a first generation hybrid? I am not seeing any."

"This gull is unusual and very interesting. It is not a classic example of anything, no species or any typical hybrid result.  We grapple for a label but as is common among gulls there is no clear answer.  I think it would be a big mistake to force the identification of this gull as Yellow-legged Gull."

"Another interesting point, too, is that the original August 1973 specimen of atlantis Yellow-legged Gull from the Madeleine Islands of Quebec was originally published as a possible HERG x LBBG hybrid! The urge to strive to be conservative is always commendable, but one has to guard against it sometimes blinkering us to what might otherwise be obvious when orthodoxies are questioned."


"In examining the Birdguides photos, I found that the vast majority of definitive plumaged YLGs had only the subapical bar on P5. However, what was of great intrigue to me was that about six individuals possessed the precise same combined pattern of a P5 black bar and a small round black mark on P4 in the exact spot as was on the Niagara gull! I am not able to say if any putative hybrid gull resembling the Niagara bird could have this pattern on P4 and P5. I have also, at this time, not examined any kindred “pure” species for a similar pattern.The fact that even a small number of definitive YLGs have this combined character on P4 and P5 certainly warrants further investigation and suggests a regularly occurring though very uncommon trait in that species. That this feature was also present on the Niagara gull speaks to me of the possibility of this being more than a co-incidence."

"Notice, too, that this attached photo of a Newfoundland Yellow-legged Gull shows exactly the same pattern that you are describing too. Even more interesting to me is that bird has a virtually identical bill structure, bill colour, bill length and thickness ratio and gonydeal spot placement, colour and extent as our Niagara Falls bird. The leg colour tone is essentially identical too as is my field impression of mantle shade.""I agree that this seems perhaps more than mere coincidence.  That AHG x LBBG hybrids might mimic YLGU so convincingly for so many of these traits while altering solely the head pattern is becoming more of a problem for me to logically reconcile, particularly since we know Yellow-legged Gull has been occurring in Canada since at least the early 1970s and is now annual in Newfoundland."

"I fully agree with you that this should be a hybrid (LBBG x AHGU), mainly due to the extensive head and breast streaking, but also late primary moult. An adult Yellow-legged Gull should have finished its primary moult sometime in October already, while this bird is still growing P9-10 (and some inner secondaries). The seemingly rather dull colour of the orbital ring may also be of help. Note, however, that the primary pattern is quite identical to that of michahellis (referring to another subspecies of YLGU)."

"No clear answers with gulls is so often the rule rather than the exception also."

If anyone else would like to weight in on the gull, feel free to send me an email or write a comment below.
Posted by Anonymous at 08:39