It may have taken a full nine days since our last bout of north winds, but finally, on our last full day on the coast, we were given some late morning and afternoon north winds. As a result quite a few birds were moving and we even added four new trip birds! But before I get to that, we had a really interesting experience with a particular owl early in the morning.

I arrived at the coast bright and early, eager to begin our last day on the coast with some seawatching, even though the winds were light out of the southwest. Kory and Jeremy had arrived a few minutes earlier and were watching an interesting bird in their scopes. I sat down at the shelter, set up my scope and scanned over the mudflats, visible at low tide, until the birds in question passed through my line of sight. There were two Bald Eagles and a Common Raven standing on the mud, at a distance of a kilometer or more, which were focused on a smaller bird flopping around on the mudflats. The eagles and raven kept an eye on the other bird, occasionally giving it a half-hearted peck. Due to the distance it was hard to get a good read on what the smaller bird was. It looked somewhat owl-like to me (I was thinking maybe Short-eared Owl), though Jeremy thought it looked more Peregrine Falcon-like because at times it appeared to have a grayish head with a lot of contrast. Our of curiosity we decided to go out on the mudflats and try to figure out what this bird was! 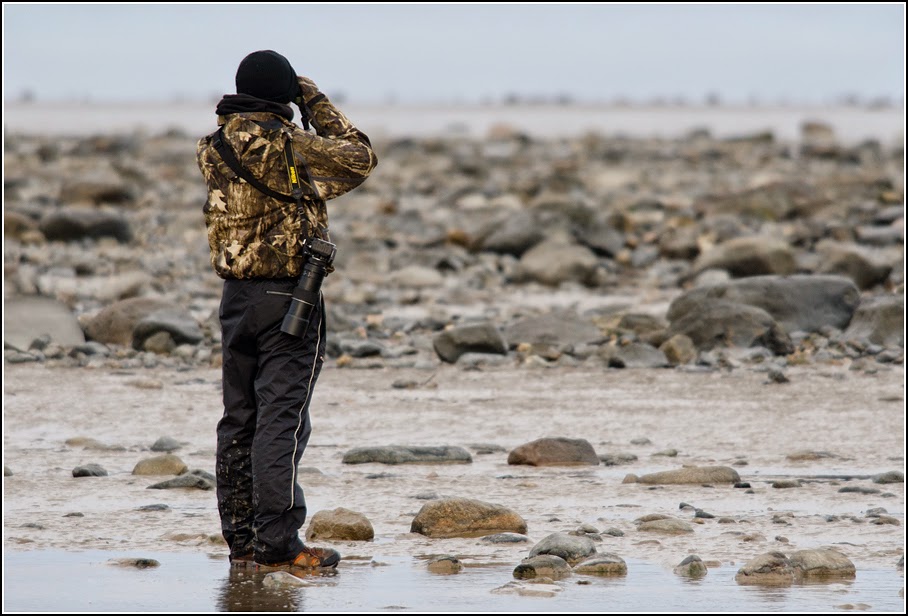 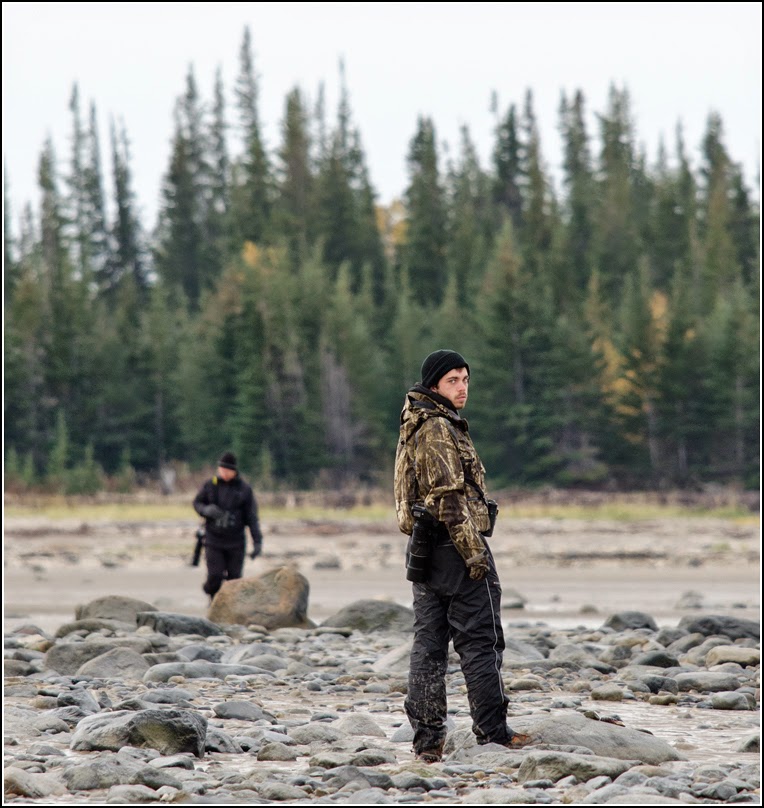 Shortly after we began the long trek, the eagles and raven went their separate ways. Our landmark was gone, and we had a very difficult time finding the exact spot where the birds were. Your perspective certainly changes when compared to looking at a compressed image at 60x power through a spotting scope. Despite a lot of walking around, we could not find the injured bird. Eventually we had to give up and walk back to the shoreline as the tide began coming in.

Not long afterwards, as we sat in the shelter watching the tide continue to advance, I spotted a dead bird floating in the water towards us. It looked very similar to the bird earlier so Kory and I walked towards it to salvage the body. Kory ended up getting soaked for his efforts, but did successfully retrieve the bird - a Northern Hawk Owl!

In hindsight this identification certainly makes sense given our thoughts earlier when we were first observing the bird. At a distance the facial pattern/colour of a tundrius Peregrine Falcon could appear quite similar to a Northern Hawk Owl. The proportions of the bird were certainly owl-like, and Short-eared seemed like a decent fit. A Northern Hawk Owl sort of looks like a hybrid between a Peregrine Falcon and a Short-eared Owl, especially given very poor, distant views!

Here are a few photos of the bird in question, after Jeremy had taken it upon himself to clean and dry the bird's plumage. Other than a broken wing and a few small cuts, the owl was in pretty good physical condition. Trust me, the bird is actually dead... 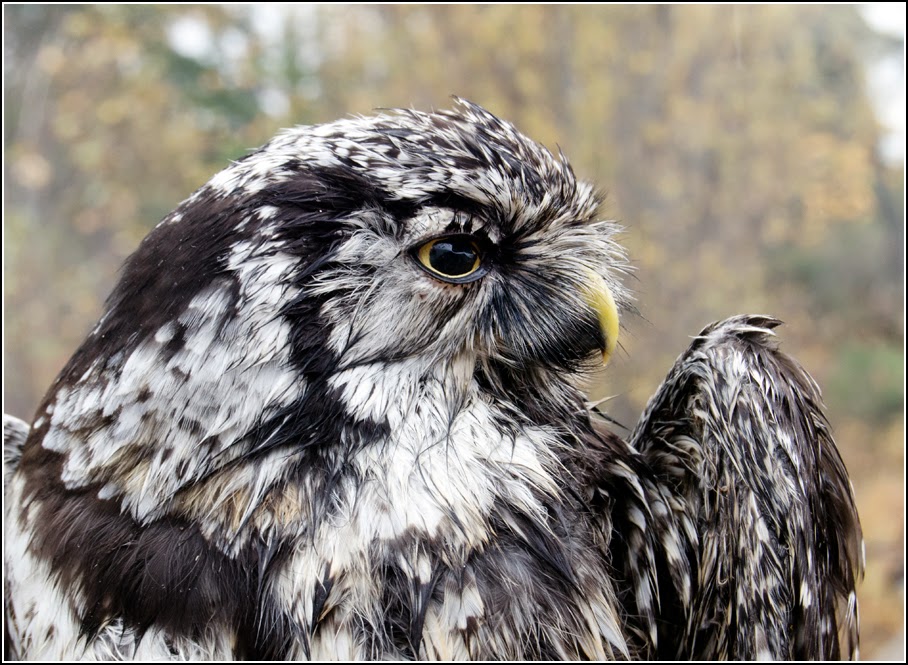 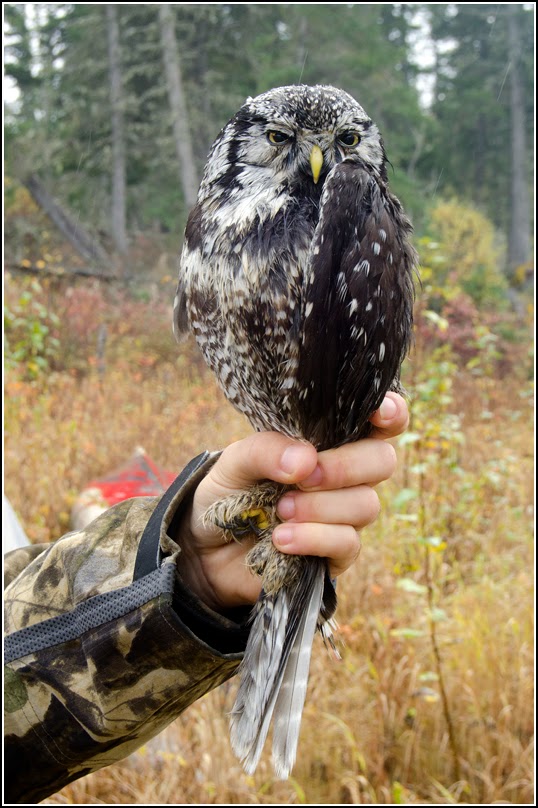 That was certainly a very cool experience - it is not every day that one can study a Northern Hawk Owl at such close range.

I'm not sure what the Northern Hawk Owl was doing out on the flats, as this species is much more at home deep in the boreal forest along the edge of a spruce bog. This species is generally non-migratory, though some birds will move away from their territories during food shortages some winters, and I'm sure young birds have some sort of post-breeding dispersal. Perhaps it was a "migrating" bird that somehow ended up over the flats, and was hit by a Peregrine Falcon or something (hence the broken wing), and the eagles/raven were just curious? Who knows.

The rest of the day was quite eventful. Kory, Jeremy and I decided that we were going to try to do a mini "big day" and work to turn up as many species as possible, given that it was our last full day on the coast. Luckily the winds cooperated and we ended up with our highest daily total of the trip - 68 species!

Around mid-morning as all four of us were sitting in the shelter, watching the tide come in, that we felt the first hint of a north wind. Throughout the rest of the morning it picked up in intensity, and just like if a switch had been turned, waterfowl and shorebirds began migrating. Brant and Northern Pintails made up the bulk of the birds and our first few flocks of Long-tailed Ducks were seen. These become much more common late in October. Several American Wigeons and all three scoter species rounded out the duck highlights. Shorebirds remained diverse with ten species seen on the day. It seemed like the Hudsonian Godwits picked today to migrate and large flocks would pass by occasionally, fairly high in the sky. By the end of the day we had tallied around 1200! New for the trip was a flock of 65 Red Knots that winged by with a group of Hudsonian Godwits.

At one point as I was sea-watching a familiar sound echoed in the distance. I initially couldn't place it until the bird came cruising very close along the shoreline (the tide was in fully at this point). It was a Caspian Tern, scanning back and forth looking for fish and as it continued on by. It called several more times before disappearing to the east. While Caspian Terns breed on James Bay (a recent colonizer), this was certainly a very late record for the region.

Lots of other good birds were seen before the day was out. Two American Three-toed Woodpeckers and a Black-backed Woodpecker near the cabins were a treat, and the first (and last) Northern Shrike of the trip was discovered by Kory and Jeremy. Sparrow diversity remained good with seven species including a Lincoln's, and a Hermit Thrush and Winter Wren were hanging out around the cabins. We were pretty surprised at the end of the day when we tallied up the species seen and came up with 68. Our previous best was 58 on September 29! Without a doubt this was one of the more memorable days of the trip, and a great way to close out the 2014 expedition.

The following morning involved packing up, burning the remaining garbage and waiting for the helicopter to arrive. I don't recall seeing any interesting birds that day and a neglected to make a checklist, so these closing photos will have to do! 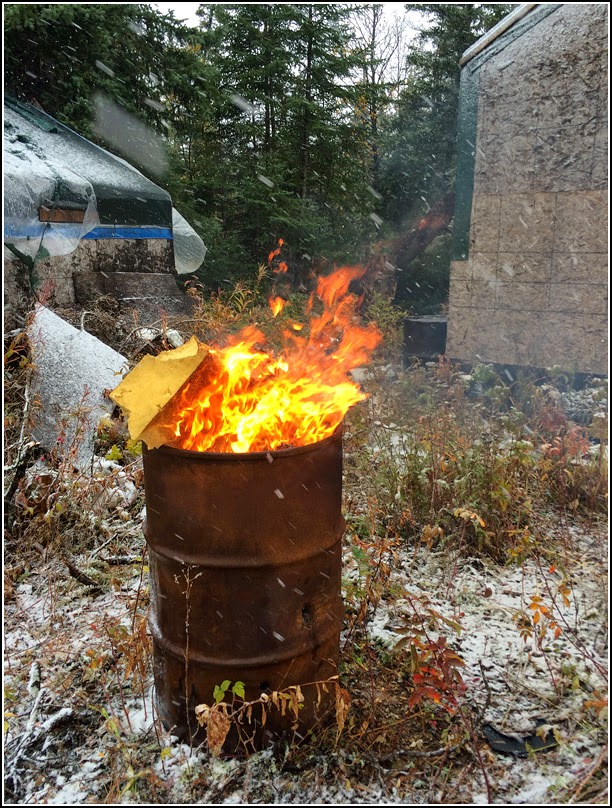 Group photo courtesy of Jeremy Bensette. This was taken at the start of the trip - it was considerably colder and snowier at the end!

Posted by Josh Vandermeulen at 19:33

What a fabulous way to end your trip. I'm sure such memories and events will be in the forefront of your thinking to entice you back again.

Absolutely, Allen! It really is a magical place...