This is a trip report from my 10-day drive along the north shore of Lake Superior from October 1 to 10, 2015. I began in Sault Ste Marie and worked my way north and west to Thunder Bay, before retracing my steps back south towards Sault Ste. Marie. From I there I headed then south through Manitoulin Island, across to Tobermory, and south through southern Ontario to get back home to Niagara-on-the-Lake. The links above will bring you to that particular day of the trip. Any links in the text below brings you to the eBird checklist corresponding with that location.

That night the temperatures dropped to -5 degrees Celsius, but I was quite comfortable in my sleeping bag in my tent, on an old logging road north of Wawa. The next morning I was up at sunrise to continue my journey south. Wawa was only twenty minutes away, and after refilling at Tim's I ventured to the sewage lagoons, down a hill west of town but still east of the highway.

I found a good variety of duck species at the Wawa sewage lagoons, including two Redheads, one Northern Shoveler (first of trip) and three Northern Pintail (new for my Algoma list). Twenty-five American Pipits and five Lapland Longspurs were on the grassy field nearby, while five species of sparrows and a few Rusty Blackbirds were visible either in the marshy edge of the lagoons or the nearby shrubs. After a few minutes I noticed some distant movement in the lagoons, and after watching for a minute with my bins it became apparent that it was a group of River Otters, diving and resurfacing again. I eventually fetched my scope for a better look, and determined that at least five were present. Pretty cool, and the first time that I have seen this species at a sewage lagoon!

I continued on, stopping in at Michipicoten harbour. After checking the small streets and feeders in the town of Michipicoten First Nation, I drove north on some backroads to reach an access point for the abandoned community and harbour, located several kilometers to the north. 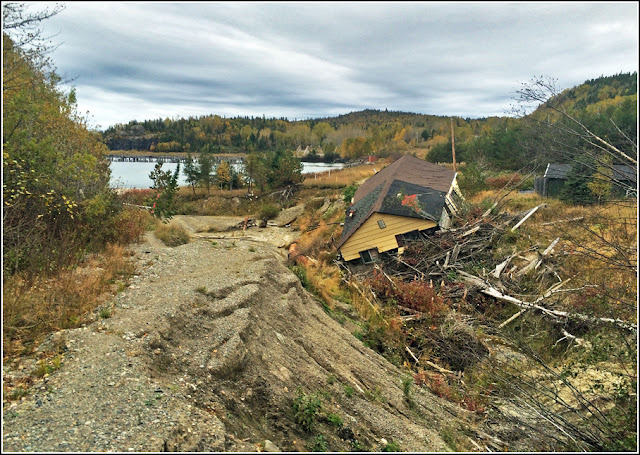 The birding was quite good in the hour I was here. Sparrows were around in decent numbers, and several Lapland Longspurs, Savannah Sparrows and Lincoln's Sparrows were scrutinized closely when they flushed from a grassy hillside. 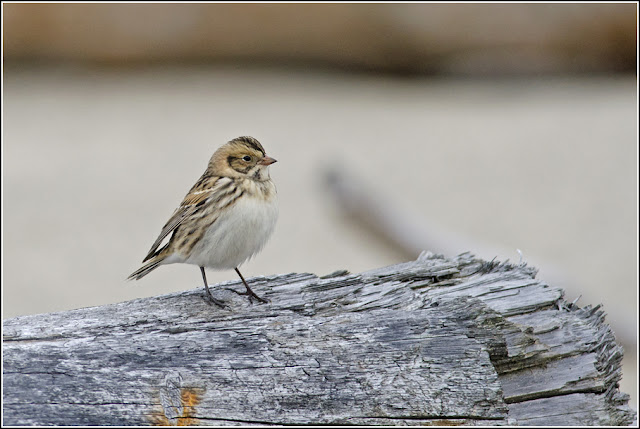 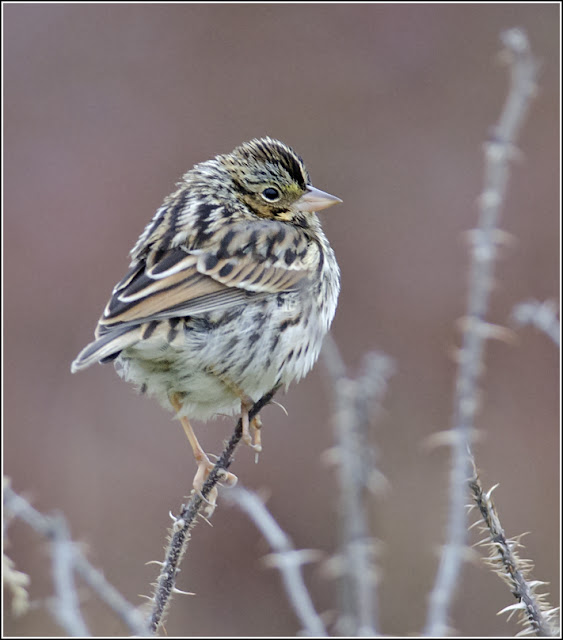 Around the old shipyard a small flock of American Pipits was accompanied by a few Lapland Longspurs and Horned Larks. In a nearby patch of spruce forest an American Three-toed Woodpecker called frequently, though I couldn't catch more than a dark shape working the side of a tree back in the forest.

I observed the occasional American Tree Sparrow in some overgrown shrubbery near an old road, and with them was one bird with a different call note. It was a Clay-colored Sparrow, working some of the dead aster for insects and spiders. It was staying low to the bushes, but after a few attempts I managed some "record" shots. This was my second Clay-colored Sparrow of the trip, and at that point was the latest that I had seen one in Ontario. 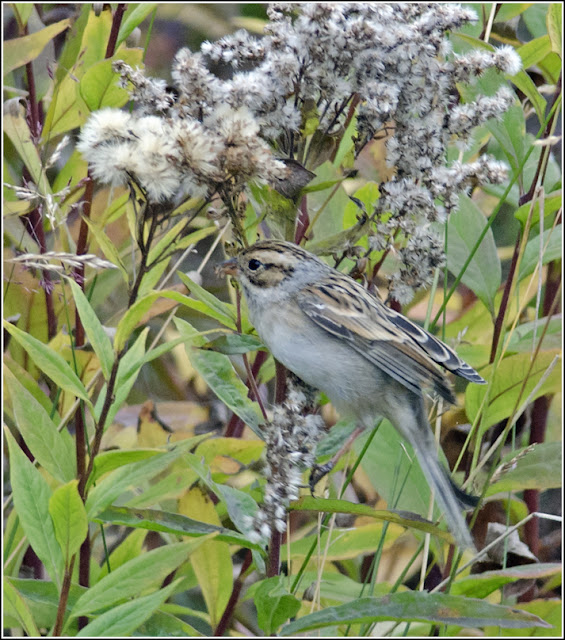 The steely gray skies gave way to darker storm clouds, and eventually the rain began to fall in bands. I decided to make strong headway on my trip and drove south for the three or so hours it takes to reach Sault Ste. Marie. One of these days I'll have to spend some time in Lake Superior P.P., especially if I make another autumn trip. Hopefully I'll have better weather next time around!

Instead of birding in the Sault (the rain was still coming down) I checked in to a local sports bar to watch the Jays' first playoff game in twenty-two years. Anyone who knows me well can attest to my Blue Jays fandom, and in the past three years I have tried to make it to as many games as I could from Aurora. It is a little more difficult now that I am based in St. Catharines but I know I'll still make the trip five or ten times a year.

Unfortunately the game did not end well with a loss to the Texas Rangers. It was still raining pretty heavily but I hit the road to make up some distance before I found a place to stay for the night. I made it most of the way to Gore Bay on Manitoulin Island before pulling off on a side road and finding a secluded place to park my car for the night. The next day I planned to bird Manitoulin for the first time, before taking an evening ferry over to Tobermory on the Bruce Peninsula where I had an offer to stay with some friends.
Posted by Josh Vandermeulen at 17:28

What the H is TIM's? EVERYONE knows it's TIMMIES.