March 5 was another full day of birding in the paradise known as Altos del Maria, located on the Pacific Slope in central Panama. For a second straight day, Alfred was generous in guiding us around his mountain, showing us some of the best spots.

This Stripe-throated Hermit provided excellent looks for the first time, as our lifer the previous day was a much more brief sighting.

We birded some new areas, as well as hitting up a couple of spots where we had been successful the previous day. It is amazing the drop-off in the number of new birds you see when visiting an area for multiple days. Yesterday, I added 40 lifers, while today the number was just 3 (Bran-colored Flycatcher, Common Tody-Flycatcher, Ochraceous Wren). Of course, having Alfred along to show us so many of these species helped speed up the process yesterday.

Even though there were fewer new birds to see, we enjoyed another day of excellent birding. Mixed flocks of migrants and resident birds, beautiful weather, good hiking and gorgeous scenery made for an excellent day in the field!

As we were hiking along the edge of a meandering stream in the forest, we observed several of these dragonflies hovering over the water. I still need to look this one up at some point.

That evening we ventured out on another night hike, though this time it was to the lake where we had seen the Little Blue Heron yesterday. The stream where I photographed the above dragonfly fed into the lake, and the potential for reptiles and amphibians looked good.

The walk was fantastic and we observed about a dozen species of frogs. Some of these I had seen in 2010 on my trip to Panama, while a few were new.

The insects were just as fun as the amphibians - perhaps even more so. Check out this spider taking down a massive 5 inch moth.

And this bad-ass spike-headed katydid: 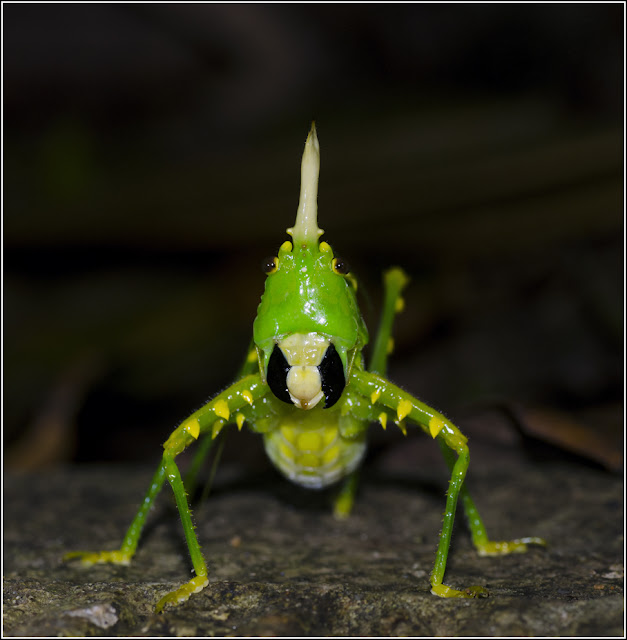 Here are a few more random photos from the rest of the evening hike.

As we were walking back to the man-made resorvoir, my camera disconnected from the strap and went crashing down, landing right on the external flash. Fortunately the camera was OK but the flash was beat up pretty badly. It still worked, but was now jammed into the hotshoe on the top of the camera and the plastic housing at the base of the flash had ripped badly so there was nothing to hold the flash in place. I ended up MacGuyvering a few elastic bands later in the trip to hold it into place, which was just enough to get me through the Darien before it was too broken to use anymore.