For the second straight morning, we awoke early and were chauffeured back to the Cuchilla de San Lorenzo in Pedro's 4x4. After our success yesterday along the ridge there were not many endemic bird targets remaining. Only the Santa Marta Blossomcrown and Santa Marta Antbird remained to be found, though they are not found along the ridge itself. We also had not crossed paths yet with several distinct subspecies that were likely future splits (Masked Trogon, Rufous Antpitta, Groove-billed Toucanet, Slaty-backed Nightingale-Thrush). We also had several species marked down as heard-only (Brown-rumped Tapaculo, Santa Marta Antpitta) which we wanted to improve on.

A few mammals and birds punctuated the darkness during the long, bumpy pre-dawn drive. Several Andean Foxes made appearances, and we encountered a Stygian Owl perched on a horizontal branch above the path. This was my first sighting of a Stygian, a widespread tropical species that is generally uncommon and infrequently seen. A Spectacled Owl was also observed briefly in the headlight beams. In the pre-dawn glow, several thrushes flushed from off of the road, including a Slaty-backed Nightingale-Thrush along with several Yellow-legged Thrushes. Shortly after, we were surprised to see the distinct shape of an antpitta perching quietly on the road - it was a Santa Marta Antpitta, our first looks at one. We saw a second one further up, though my photos aren't worth posting here. Just like that we had seen two of our targets and two bonus owls, and we still had a full morning of birding on the ridge.

It was a beautiful day of birding once again, and the views were just as spectacular as the previous day. Now that we were more accustomed to the common birds of the ridge and learning their vocalizations (Yellow-bellied Chat-Tyrant, Tyrian Metalmark, Mountain Elaenia, Black-cheeked Mountain-Tanager, White-throated Tyrannulet, etc) it was easier to pick out additional species.

As we walked, a small flock of Santa Marta Parakeets winged over, eventually settling into some fruiting trees along the path. While some flushed, we were able to watch the remaining birds feeding in the trees. It was still pretty early at this point with not much light, but my photos came out ok.


We encountered two new woodcreeper species on the ridge - a Plain-Brown Woodcreeper and an impressive Strong-billed Woodcreeper.

A small group of parrots were calling in the trees above us along the ridge, revealing themselves to be Scaly-naped Parrots. The lighting was sufficient so we were able to come away with decent photos.


Some distant vocalizations were investigated and before long we had a Rufous Antpitta calling away from somewhere down the slope below us. The birds in the Sierra Nevada de Santa Marta prefer bamboo thickets in the elfin forests, and are distinct morphologically and vocally from the other subspecies - a likely split. Unfortunately we weren't able to view this individual but we were hoping that more would be encountered.

Returning back to the vehicle, the Santa Marta Brushfinches were amicable to our offerings once again, and we shared breakfast with them.

There really wasn't much left for us to see at this elevation - the Blossomcrown, Antbird, Masked Trogon and Screech-Owl could all be found in the forests or scrubby areas further down the mountain. The Brown-rumped Tapaculos had stopped singing, putting to rest the idea that we would actually see one. Oh well, if you are going to have a bird as a heard-only, it might as well be a non-descript tapaculo that is mostly identified by voice!

We decided to drive back down the mountain, stopping in productive-looking areas. We would be birding here during the mid morning, as opposed to the afternoon lull of yesterday. Coming around a bend, we spotted a lump perched quietly on a branch off the side of the path. It was a White-tipped Quetzal, a species limited to the mountains of Santa Marta and Perija in Colombia, as well as parts of northern Venezuela. A pair of these beautiful birds were perched here, likely nesting nearby.

A Masked Trogon was found perched as we drove by, yet another bird that may have its Santa Marta population relegated to species status.

At a couple of scenic overlooks we scanned for soaring raptors, coming up with not much other than vultures. We were all pretty hungry at this point, and with nothing potentially new to see in this area we drove back to the lodge.

Three surprises were waiting for us back at the lodge, as we took a couple hours off in the late morning. The first was a small hummingbird buzzing around some of the small orange flowers in the gardens; it was a female Santa Marta Woodstar. This diminutive endemic was a lifer for most of us. I had seen one during our first morning on the ridge, but the views were quick and far from satisfying. This one made frequent visits to the flowers, providing decent photo ops despite the harsh sun.


The second surprise occurred as Daniel Riley and I went for a walk on some of the trails below the lodge. Walking into a fairly open area, we saw the dark shapes of a pair of soaring raptors above us, quickly revealed to be Black-and-Chestnut Eagles. They circled above us several times, providing great looks if a bit obscured through the sparse trees. The two eagles continued on further up the mountainside after a few minutes, but the views were great!


Returning to the lodge, we were met by a British birder who we had chatted with the night before. He had discovered a pair of roosting screech-owls, the local undescribed (for now) form found in the Santa Marta mountains. Steve joined Daniel and I to check out the owls, still exactly in the same spot.

Early in the afternoon the four of us (Daniel, Dan, Steve, and I) continued on foot down the road away from the lodge, hoping to see some different species at the slightly lower elevation. Double-toothed Kite was a welcome addition to the trip list. About 500 m away from the lodge, we came across a single Sickle-winged Guan, while also finding both species of woodcreepers, Rusty-headed Spinetail, White-lored Warbler, Santa Marta Brushfinch, Golden-breasted Fruiteater, Slaty-backed Nightingale-Thrush and several other more common species.

It was another great day in an amazing location, so we celebrated that evening by having a beer with Juan the Guan.

Another nighthike was in order for that evening. We had noticed several small watercourses on our walk down the road from the lodge, so we returned in hopes of exploring these. Of course, invertebratess were in large supply and we observed several of the same endemic tarantulas (Kankuamo marquezi) as well as a few large orthalicid land snails.


Some of the streams were too steep or with too much vegetation growing beside that we could not explore them, but other were large enough that we could scramble up the rocks for a ways. After successfully photographing a few frogs, I was on my way back down the creek towards the road when I slipped and fell, landing in a rather deep pool and completely submerging my camera with attached macro lens and flash. I immediately pulled the camera out of the water and took out the battery without pressing any buttons, but I did not think the camera had much of a chance given the fact that it was completely submerged for two seconds. It put a damper on what was otherwise an excellent day in the Santa Marta mountains. Here are the last few photos I took that evening before the incident. 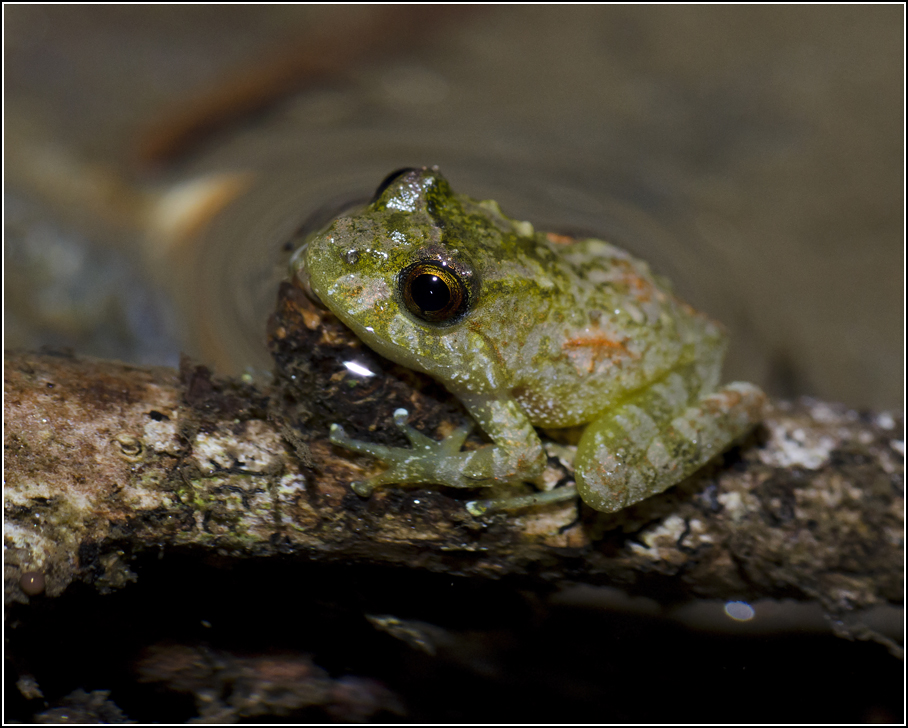 We had one full day remaining in the Sierra Nevada de Santa Marta and had seen nearly every bird species that we hoped for. Still remaining were two endemics - Santa Marta Blossomcrown and Santa Marta Antwren - along with the local specialty of Groove-billed Toucanet. Our plan for the morning was to hike further down the road away from the lodge to get into the habitat for the remaining birds. I was hoping to also take the opportunity to dry my camera in the sun in the afternoon with hopes of a miracle.
Posted by Josh Vandermeulen at 09:44

Hi, thanks very much for provided this information, I will go to San Lorenzo in February 24 and spend around 2 days.
I will share you my pictures.!