I arrived in Colombia during the wee hours of January 17 after an uneventful flight from Toronto, making both of my short connections (Newark, NJ and Panama City) before landing in the city of Barranquilla near the Caribbean coast. I stepped outside and was met with the warmth of the tropics, a welcome change after the deep cold that had set in back home in Ontario. It was my first time in South America and I was pretty excited for what the next few weeks had in store! I grabbed a taxi to the hotel where the guys were staying and slept for a couple hours before our early alarms would go off.

By 5:00 AM we were awake, the other guys eager to start this second week of their trip, now in a new location with a different suite of birds. I met Dan Wylie for the first time and reconnected with Daniel Riley and Steve Pike. We arrived at our destination for the morning, Isla de Salamanca, by 6:00 AM as dawn broke.

This region of northern Colombia has a high number of bird species found nowhere else in the world, or shared with neighbouring Venezuela. The Sierra Nevada de Santa Marta hold at least 21 endemic species, with several more likely coming with future splits. The nearby dry, desert-like Guajira region of northeastern Colombia/northwestern Venezuela also has a number of endemic species. Our reason for visiting the mangroves of Isla de Salamanca was to search for a few specialties of this area including Chestnut-winged Chachalaca, Bare-eyed Pigeon, Russet-throated Puffbird, Chestnut Piculet, and the endemic Sapphire-bellied Hummingbird.

It was fantastic to be birding and exploring again in a new country, where exciting things were seemingly around every bend. After paying our entrance fees at the gate we set out on foot towards the seasonally flooded forest at the edge of the mangroves. A flowering tree was popular with several hummingbirds and after a short vigil a male Sapphire-bellied Hummingbird landed and perched quietly on a lower branch! Endemic to a small stretch of mangroves along coastal northern Colombia, it is thought by some that this "species" may just be a colour variant of the very similar Sapphire-throated Hummingbird, which also occupies the same areas. Regardless of its status, we enjoyed views of this bird in comparison with the numerous Sapphire-throated Hummingbirds.

Brown-throated Parakeets were feeding on the blossoms, providing good photo opportunities, and one of the guys spotted this Lesser Nighthawk, perching quietly on a horizontal branch at the edge of the woodland.

We explored the woods at the edge of the mangroves, eventually spotting our first Chestnut Piculets, Russet-throated Puffbirds, various flycatchers and a Straight-billed Woodcreeper. The most common bird in this habitat type was Prothonotary Warbler. They winter here in large numbers and viewing them this well was quite different than what we are used to seeing in Ontario.

Eventually we ventured on a boardwalk through the mangroves to a small observation tower. It was now midmorning and the bird activity was going strong along the edges of the mangroves. Eventually a small flock of one of our targes, the Bicolored Conebill, appeared, allowing great looks before continuing onwards. Single Large-billed Terns flew over periodically, a species that I was really happy to see. Their striking wing-pattern is quite obvious at a distance. Both the conebills and the terns were a little too distant for good photos, so these heavily cropped ones are all I have.

Some brief looks were had at Pale-eyed Pigeons winging by, and the day list climbed as quickly as the temperature, gradually slowing down bird activity. One last surprise was a small group of Chestnut-winged Chachalacas calling from the other side of the road, with at least a couple of the birds sticking around long enough for good, though distant views. A great start to the trip and by 8:30 we were on our way to the next destination.

We crossed the long causeway connecting Isla de Salamanca to Cienaga, adding our only White-cheeked Pintail for the trip along with some common terns, waterfowl, and Magnificent Frigatebird. By 10:00 AM we turned off the highway to begin our climb towards the Sierra Nevada de Santa Marta and El Dorado, our base for the next four nights where we hoped to see most of the endemic species this unique area has to offer.


We added about 20 bird species (most of them common dry forest species) prior to our noon arrival at the town of Minca, where we were to meet our driver, Pedro. The plan was for Pedro to be our ride up the somewhat difficult road into the mountains.


While waiting for Pedro, we enjoyed lunch with several cold beers at the terrace of Hotel Minca. The hotel overlooks a scenic valley, but even better was that they had an extensive hummingbird feeder setup. Not only was it easy to add several new birds here, but the views and photographic opportunities were excellent. White-vented Plumeleteer, White-necked Jacobin, Steely-vented Hummingbird and Rufous-tailed Hummingbirds were the most common species, while we also saw Long-billed Starthroat, Red-billed Emerald, Rufous-breasted and Pale-bellied Hermit, and Black-throated Mango.


By early afternoon we had met Pedro and began the long drive up the mountain in his high clearance Toyota 4x4. 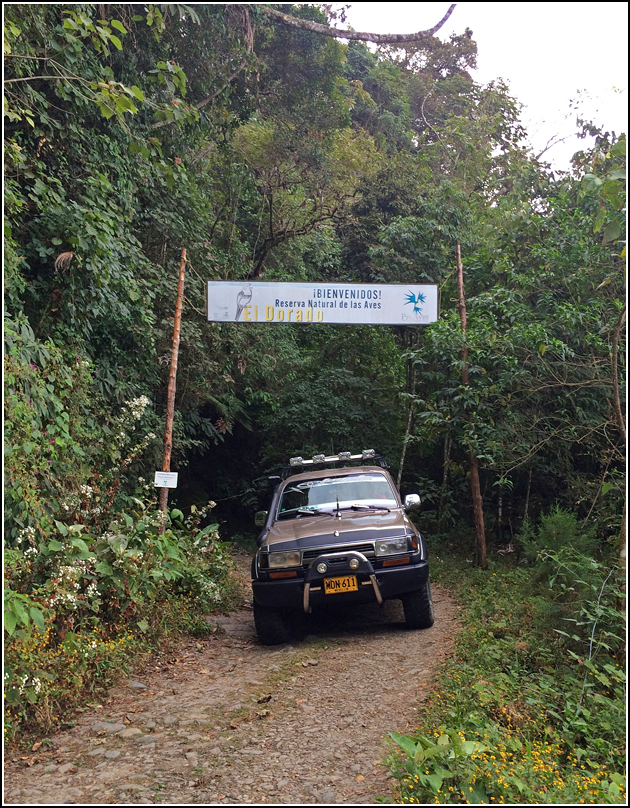 We made frequent stops as we slowly rumbled up the rapidly deteriorating road, occasionally adding new birds with each change in elevation. While the time of day was not ideal for productive birding, the road passed through various habitat types including dry forest near Minca, coffee plantations, and open scrubby areas mixed with wetter forests. I added 12 life birds just in the drive up, including this Golden-faced Tyrannulet.


Our first few Santa Marta endemics appeared including a Santa Marta Foliage-Gleaner and a furtive Santa Marta Tapaculo that eventually gave good, if obscured, views. We were happy to spot a few more regional specialties in our first Golden-winged Sparrow of the trip and the only Scaled Piculet we would see.


It was nearing dusk as we rolled up to the entrance to the El Dorado lodge, our base for the next four nights. A White-tipped Quetzal called shortly after arrival, and we also were acquainted with the local Band-tailed Guans that hang around the lodge - they were roosting in some trees above the road.

After settling in with our accommodations and eating dinner, we went out for a night-hike along the road leading to the lodge. Herps were our main priority and we were not disappointed as we found nearly a dozen frog species and several Savage's Salamanders (Bolitoglossa savagei), most found tucked inside the lower levels of the bromeliad fronds, waiting for insects to come to them.

Herps are definitely my top targets when night-hiking, simply because so many species can usually be readily found at this time, much more so than during the day. However, invertebrates also provide a fair bit of excitement and it is fascinating to study the wide variety of spiders, crickets, walking-sticks, beetles, ants and other invertebrates that are very visible when illuminated by the beam of a headlamp. These tarantulas were quite common, both out in the open presumably on the hunt for insects, or waiting back at the edge of the web tunnel.

*Update: The species is Kankuamo marquezi, part of a monotypic genus, and was only first described in 2016. It is restricted to areas on the northwest flank of the Sierra Nevada de Santa Marta, between 2000 and 2300 m in elevation.

The temperature cooled as the evening wore on, and reptiles remained hidden throughout our hike. It may have been a little too cold for snakes but the wide variety of frogs kept things interesting! We were hoping for owls too, as the undescribed form of Screech Owl is often heard and seen around the lodge and in the surrounding forest. We were pretty tired after a long day so we packed it in after an hour and a half, without having any luck finding calling owls.

At the end of the day we finished with a respectable 108 bird species, 29 of which were lifers for me. The plan for the next day was one that I had anticipated all winter - a drive to the San Lorenzo ridge at dawn, high up on the mountain. The views from the top were supposedly incredible, but more importantly, the majority of the endemic species of the Santa Marta range could be found there.
Posted by Josh Vandermeulen at 19:25

That's a lot of frogs!

Hi Josh, I love your series here on Colombia. I was in this region February 2016, and enjoyed it immensely, although I had some constraints to my ability to bird (kids, and family obligations in Barranquilla). Still, we had a great time in Colombia, and will probably be heading back next winter to hit some other areas (near Medellin and Cali), and potentially to revisit the Cuchilla San Lorenzo. I love your herp photos -- have you had any luck identifying some of the frogs? Also, did you guys use songs to call out certain bird species? And, what resource did you use to study your bird songs before going (and while there I guess)? Lastly, did you rent a car anywhere (like between Barranquilla and Minca), or just use public transportation? If you have time to respond, great! If not, I understand. You can also email me at markeambard at gmail. :)

Thanks for the comment and best of luck on your return trip to northern Colombia if you end up going next winter! I'll send you an email.

I just stumbled upon this blog and it looks awesome! How are you able to travel so much? Is this part of work or do you just get that much time off of work?
Jeff corwin