Laura and I drove down to Point Pelee after finishing work on Friday, a location that I had not visited in far too long of a time. The main goal of the weekend for us was to meet up with many of Alan Wormington's closest friends and his family on the Saturday to share stories, reminisce, and celebrate his life.

Saturday morning dawned cool but sunny with a moderate southwest wind clipping along. A tip watch was in order given these conditions, and we assembled at the most southern point of mainland Canada along with a dozen or so others. 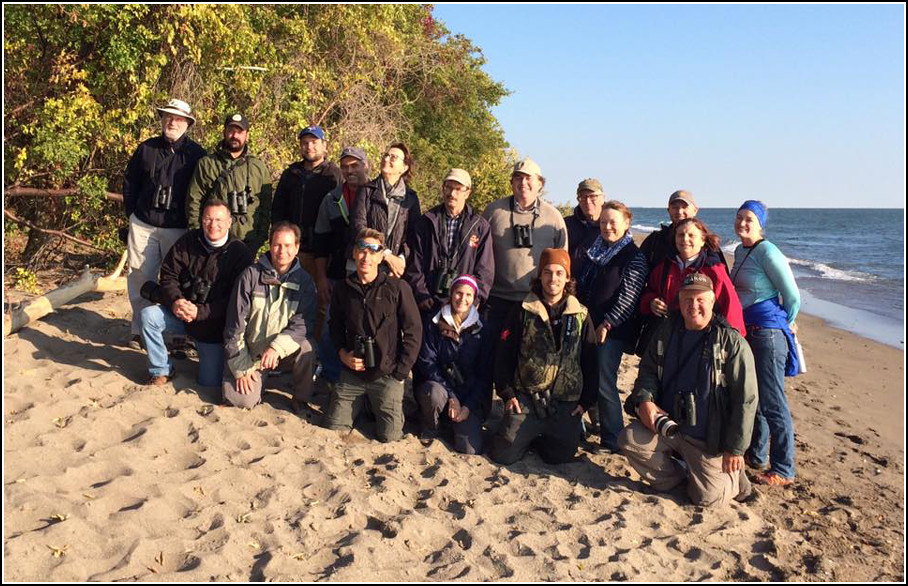 We had a nice walk through the woods from De Laurier to the cemetery, then afterwards gathered at Blue Heron picnic area to enjoy a feast that was generously prepared by Kory Renaud, Steve Pike, and Jeremy Bensette. While we were sitting there eating lunch, Steve yelled out "Cloudless Sulphur!" and we all turned to look as the large, greenish-yellow butterfly floated on by. It was a new Ontario butterfly for several of those present, including Bob Curry. Cloudless Sulphur does not show up every year in Ontario, but occasionally individuals do arrive in the southwest of the province, usually after and during strong southwest winds. Autumn is the best time to see this species and other southern immigrant butterfly species in the province.

In the afternoon, Laura and I headed to Hillman Marsh with several others including the 'Burg Birder in hopes of seeing a Cattle Egret and Hudsonian Godwit. The Cattle Egret had been found by Kit McCann on the Friday, while the godwit was discovered by Jeremy Hatt, Marianne Balkwill, Richard Carr and Rick Mayos earlier in the day.


Luckily, both species were still present, and I was happy to add both to my Pelee list which now stands at 306. The last time that I added two new Pelee birds in one day was March 11, 2013 (Snow Goose, Iceland Gull).

As we were leaving the shorebird cell, an interesting looking ratty crow flew over - unfortunately it didn't want to speak, but it looked small-ish with snappy wingbeats, and Laura and I joked that it was probably a Fish Crow. Besides, we hadn't seen an American Crow all day, so it must be a Fish Crow, right?

Laura and I next explored the Couture Dyke, not finding much other than hundreds of mosquitoes. We did located a few butterflies including some late Bronze Coppers.

We also spotted a shed skin from a watersnake that was close to four feet in length. The snake did not appear to have much of a pattern, leaving us to wonder if the owner of the shed showed characteristics of Lake Erie Watersnake, a subspecies mainly restricted to the islands in western Lake Erie. Occasionally individuals on the mainland, especially at Point Pelee, have resembled Lake Erie Watersnakes morphologically. 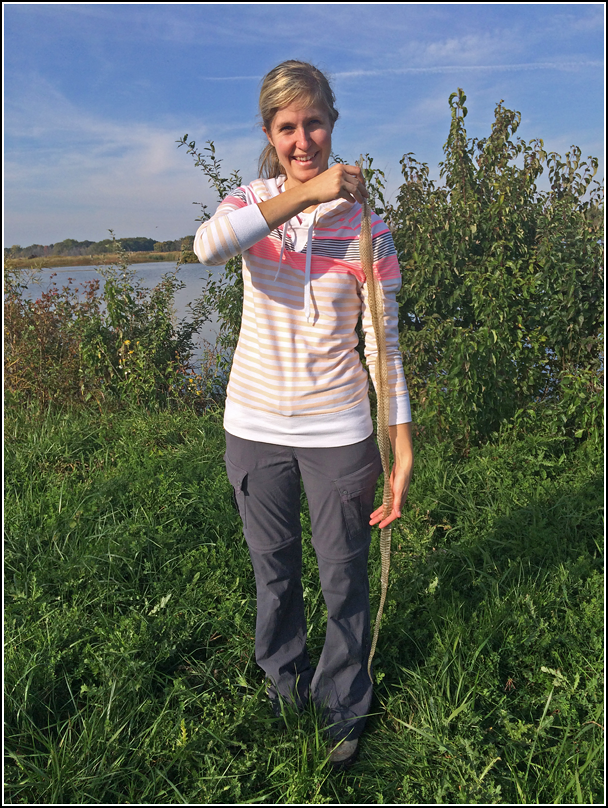 Kory Renaud texted me about half an hour later to let me know that he and Jeremy Hatt had located a crow at the parking lot for the shorebird cell, and it was indeed a Fish Crow. It was also missing some flight feathers so it must have been the bird that Laura and I watched. We returned to the cell to check it out and photograph it.


Unfortunately the Fish Crow did not seem to be doing too well. It was far too tame for its own good, letting us walk right up to it, and spent much of its time picking away at some sort of irritation (mites?) in its plumage and on its feet. Its somewhat wheezy breathing indicated that it may have a respiratory infection as well. This appears to be the same crow that was at the tip of Point Pelee about a week or two prior, as that bird was also missing several flight feathers and exhibited similar behaviour.


Fish Crow is a species generally found in coastal areas of the American southeast north to southern Maine, but their range does go up the Mississippi River to southern Illinois and Indiana, as well as cuts inland from the Atlantic coast to central Pennsylvania and New York. Formerly a very rare bird in Ontario, Fish Crow is now regular enough that it has since been removed from the Ontario Bird Records Committee list of species that require documentation for southern Ontario.

Part two will cover our finds from the Sunday.
Posted by Josh Vandermeulen at 21:16

It was a good weekend for sure!
Glad you posted the photo of the group at the Tip (lovefest as Alan might say!).

Thanks Blake! It was a good weekend, and great to see you as well.