Expedition to Netitishi - from Niagara Falls to Moosonee

Getting to Netitishi Point is always a bit of an adventure, and it is an unusual situation when each leg of the journey goes by without incident, in my experience. However, this time the cards aligned and Todd and I made it to the coast as quickly as possible by means of car, train, taxi and helicopter.. Before I get into the details on our time on the coast, I will briefly mention our drive up and the sightings that we had.

My phone's alarm clock signaled the beginning of the trip during the wee hours of October 27. I usually have a hard time sleeping the night before a trip and this was no exception, though I was fortunate in at least catching 2-3 hours of shut-eye. By 4:30 AM I had arrived at Todd's place in Ayr. It was cold with a bit of sleet coming down as we played the tetris game, loading up his car with all our gear. I may have gone a little overboard with grocery shopping and it was a bit of a struggle to fit everything in! Better to be safe than sorry...

We made good time through Toronto, though decided to skip on birding the Barrie waterfront at dawn since the windy and snowy conditions were not conducive to searching for waterbirds, plus sunrise was still an hour away at this point. So northward we drove, our first birds of the day being some Snow Buntings that flushed from the roadside somewhere near Bracebridge (my bet was on Common Raven for bird #1 of the day). Eventually the ravens did show as the day brightened, and we even had a flyover Gray Jay somewhere in southern Parry Sound District. Surprisingly, this was a year bird for me!

Our first stop was the Powassan lagoons, one of my favorite stops along this stretch of highway since the sewage lagoons seem to ooze with potential and it is easily accessible off of Highway 11. Not much was happening during this visit however, just the usual Sewage Lagoon Ducks. One of the lagoons even exhibited a thin layer of ice, a stark reminder that autumn was nearly in the rear-view mirror.

After a brief, largely unsuccessful stop at a landfill north of North Bay we continued onward, stopping at the New Liskeard lagoons by early afternoon. We ran into local birder Serge Gendron here, and he showed us photos of a couple of shorebirds he had found in one of the cells - a White-rumped Sandpiper with some Pectoral Sandpipers. After bidding goodbye to Serge, we found and studied the shorebirds, encountering a few other odds and ends here including an unexpected female Long-tailed Duck. Even more surprising was who we ran into while leaving the lagoons. As two female figures approached us, we mentioned that the one almost looked like Barb Charlton. Sure enough, as they approached closer we realized it actually was Barb, along with Nicole Richardson. Funny running into them way up here in New Liskeard! Barb and Nicole had had a successful evening of owl banding at Hilliardton Marsh the previous night and showed Todd and I some pictures of Boreal, Northern Saw-whet and Long-eared Owls. Pretty cool!

Barb took a photo of Todd and I as well - thanks Barb.


Todd and I were eager to get to our hotel in Smooth Rock Falls before it was too late in the evening, so that was it for our birding stops. We pulled into the hotel by sunset, enjoyed our last hot showers for some time, and completed the last minute packing and organizing. Our hope was that we would be on the coast of James Bay by the following afternoon!

Most birders who visit Moosonee take the train up from Cochrane, but lately I have been happy getting on at Fraserdale. Fraserdale is a tiny settlement about 2 hours northwest of Cochrane, accessed by driving on Highway 11 for an hour west towards Smooth Rock Falls, followed by an hour north along a well-maintained road through the boreal forest up to Fraserdale. The drive from Cochrane to Fraserdale takes the same amount of time as the train, plus the road to Fraserdale has been, in my experience, excellent for finding grouse (my "best" grouse day was September 27, 2013 where Jeremy Bensette, Alan Wormington and I saw 13 Spruce and 4 Ruffed Grouse). Catching the train at Fraserdale also allows one to bird nearby Abitibi Dam, a massive hydroelectric dam that also has quite a bit of surrounding open land around the work camp, a magnet for unusual birds. Alan Wormington discovered two Northern Wheatears here, one in 1972 with Mark Jennings, and another in 1989 on his own. I can only imagine what would turn up here if it was birded regularly!


Back to this year's trip. Todd and I left Smooth Rock Falls before sunrise on October 28, making good progress up the road towards Fraserdale as the sun broke over the black spruces - one of my favorite sights. The grousing was a bit slow today (it is usually better early in the autumn) but we still managed to turn up one Spruce Grouse feeding quietly on the road shoulder.

Our check of Abitibi Dam was quite productive given the late date and frozen landscape. We observed our first "northern" finches of the trip including both Pine and Evening Grosbeaks, Common Redpolls, and Purple Finches. Todd spotted a sparrow feeding along the edge of one of the buildings adjacent to the dam - we were surprised to see it was an immature White-crowned Sparrow. This was unusual as most birds had already cleared out - even Dark-eyed Juncos were nowhere to be seen by this date, and American Tree Sparrows nearly so.

Walking around the work camp and some of the open fields, we encountered a few more interesting birds including a Northern Shrike that attacked two American Tree Sparrows, right after we had "pished" them up out of the grasses. Clever bird, using the distraction to make an attempt at the sparrows, though it was unsuccessful this time! We also flushed a Wilson's Snipe out of a frozen ditch - it is getting somewhat late for them as well. Eventually we had to get going to catch the train but it had been a good walk with some interesting sightings. 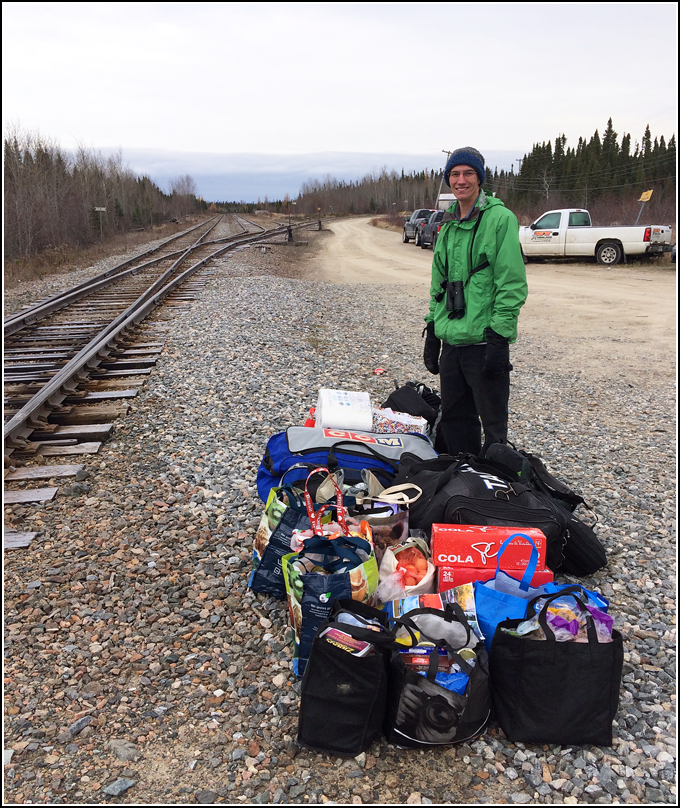 The train to Moosonee is one of the most reliable ways to find Sharp-tailed Grouse in northeastern Ontario - I have seen them from the train on nearly every trip to Moosonee. Todd was eager to spot some, as they would be a lifer for him. Views aren't the greatest in this setting - usually, they consist of watching a small group flushed by the train, flying away from us over the bog, but occasionally views are quite good if the birds are close.

Needless to say Todd was a little upset when I saw 5 Sharp-tailed Grouse during the literally two minutes that he had suspended his watch to use the facilities! Fortunately however, we would see two more flocks in the large boggy areas, finishing with 27 total individuals. We also spotted a flock of twelve Bohemian Waxwings as well as four Rough-legged Hawks, both year-birds for me, and by 2:00 PM we rolled into Moosonee.

Our helicopter was booked for 2:00 PM so it was a bit of a mad rush to collect all of our gear, flag down a taxi, and get to the airport. The roads were in the best condition that I have ever seen them in Moosonee so the taxi ride went smoothly, and by 2:30 we were boarding the chopper! 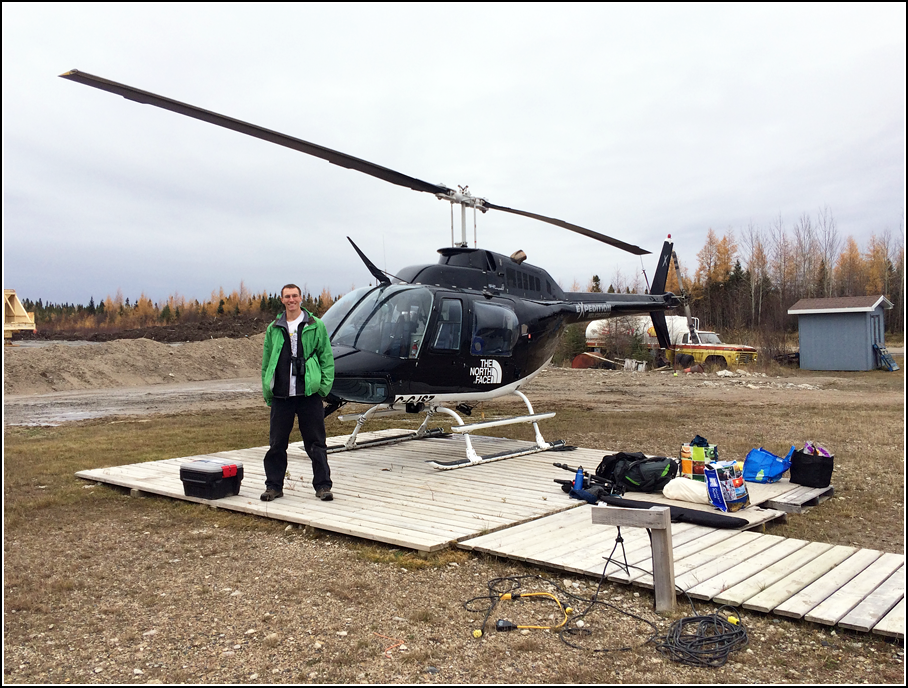 The subsequent posts will cover our time at Netitishi Point.
Posted by Josh Vandermeulen at 10:20