Our plane landed during the middle of the night after a largely uneventful flight to Punta Arenas, deep in the heart of Patagonia. Due to the late hour of our arrival, we decided on trying to catch a bit of sleep in the airport before dawn came around. It was one of those situations where i was glad that I had packed my thermorest and lightweight sleeping bag, even though cargo space in my 40L pack was at a premium.


Eventually the horizon began to brighten so after a few hours of fitful sleep, we were on our way by taxi to the city center where we had a rental car booked.

Before long we were on our way in our new Renault Fluence, the cleanest that the car would be for the next three days. Punta Arenas, though the largest city in the region, is a relatively small city of 120,000 inhabitants so traffic was not an issue as we left the town and followed the highway into the interior. Black-browed Albatrosses, Magellanic Cormorants and Dolphin Gulls were easily seen along the waterfront in town, a nice start to this leg of the trip!

As we drove further from the coast and towards Torres del Paine and the Andes, the landscape opened up into vast plains and grasslands, while sheep roamed intermittently. We passed a few wetland areas on the drive, stopping to find Magellanic Oystercatchers, Chilean Flamingos, Coscoroba Swans, and both Upland and Ashy-headed Geese. Occasional Andean Condors were seen overhead as well.


The birding was a little slow in areas, particularly in sections of vast grasslands where not much else broke up the landscape. However Lesser Rheas, our first rheas of the trip, were an exciting lifer, regardless of how common they ended up being. A roadside stop in suitable looking habitat produced a singing Austral Canestero, another target species we were hoping to nail down in this area.

By late afternoon the distant peaks of Torres del Paine were much closer and we turned on a sideroad to access some nearby mountains, known as the Sierra Baguales. Well known for its mixture of steppe, tall cliffs, and dense scrub with the occasional creek cutting through, the Sierra Baguales provide habitat for a number of localized species. Most of the species found in the extreme southern Andes can be found in these mountains. These specialties of the region included White-throated Caracara, Dark-faced and Cinnamon-bellied Ground-Tyrants, Least Seedsnipe, Band-tailed Earthcreeper and Yellow-bridled Finch.


The Guanaco is one of two species of camels found in the Southern Andes; the other species being the Vicuña. The domestic llama originated from the Guanaco, while the alpaca is a domesticated form of Vicuña. Guanacos proved to be quite common throughout the steppe of Patagonia, eking out a living in an inhospitable environment. They also were easily seen in the Sierra Baguales, their silhouettes obvious from miles away.


Lesser Rheas evidently were not restricted to the lower elevations either, as they roamed some of the pastures in the foothills.

As we climbed higher in elevation, we passed the occasional roadside wetland, some of which were occupied by Crested Ducks and Silvery Grebes. Several South American Snipe flushed from another wetland, while a good variety of other waterbirds were present.


This Southern Lapwing, acting agitated because of our presence, more than likely had a nest nearby.


It was evening by the time that we were high enough in the foothills to search for some of our main targets. Unfortunately the birding was fairly quiet despite the time of day, and we had no luck with our main targets. Our first Cinnamon-bellied Ground-Tyrant was our only new addition, though we enjoyed hiking through the picturesque landscape and watching the Greater Yellow-Finches and various sierra-finches as the day approached its end.

As the sun set behind the Andes we found a good spot to park for the night, and I set up my sleeping mat outside while Dave and Adam planned on sleeping in the car. Due to our latitude it was well after 11 PM when darkness finally descended. 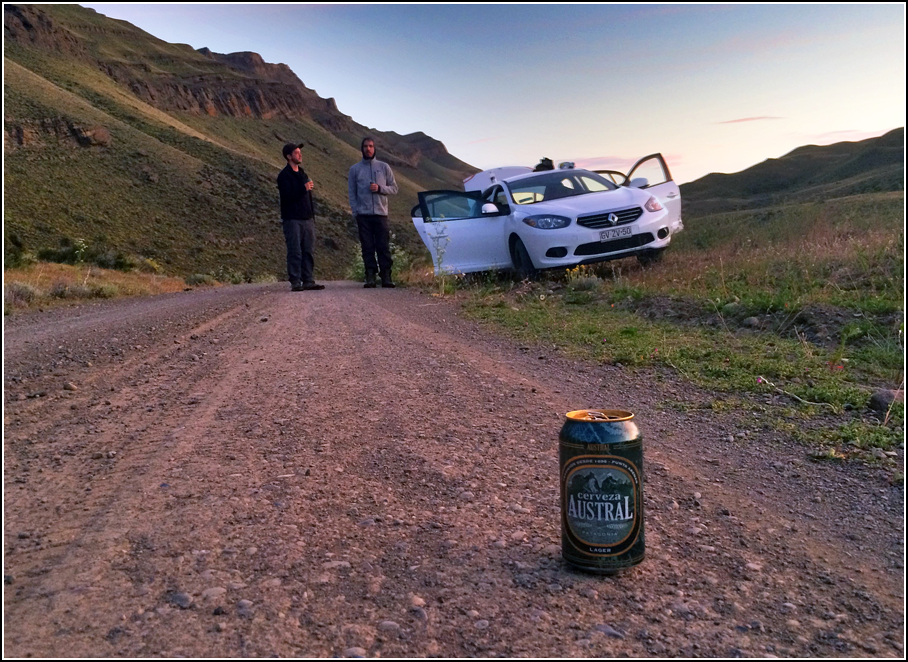 Posted by Josh Vandermeulen at 22:37