Some rain fell during the night but it was clear before dawn. The earplugs ensured that I had a decent sleep, though I was still pretty tired and it was past 6 AM before I had finally dragged myself down the stairs to my car. Guess all of the hiking over the previous few days was catching up to me, or perhaps it was the remnants from jet lag (the ill effects of which I was surprisingly able to avoid this trip). The area I was in, the northern part of the Crocker Range, is referenced by number 3 in the map, below. 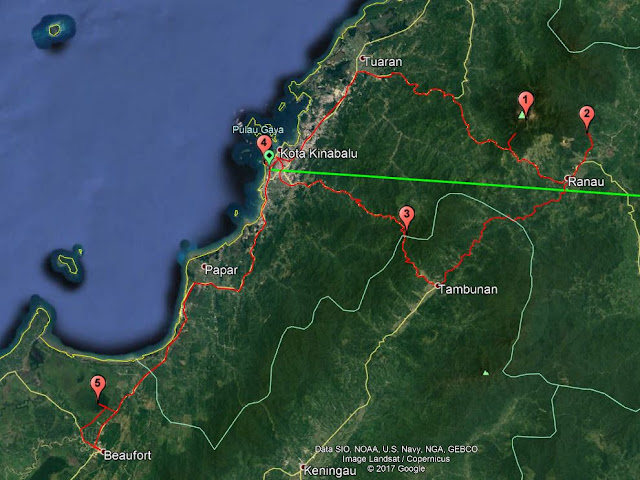 By 6:20 AM I pulled into the parking lot of the Rafflesia Information Center (RIC) where I would begin my day. Unlike my time at Kinabalu Park, the strategy here would be slightly different. While Kinabalu Park has an extensive trail system, here in the Crocker Range I would be doing all my birding from the roadside. The jungle is just too dense and there are no trails heading off into the forest. Trip reports I had read mentioned how it was a little frustrating birding beside a relatively busy road, but the forest is such high quality here with an abundance of foothill and submontane species. A handful of species are much easier here than they are at Mount Kinabalu so most birders spend a day or two in the Crocker Range. In particular, I was hoping to catch up with Bornean Barbet (E), Mountain Barbet (E), Bornean Leafbird (E), Bornean Bulbul (E), Pygmy White-eye (E), and the endemic subspecies of Ashy Bulbul, split by some authorities as Cinereous Bulbul (E). Fruit-hunter (E) and Whitehead's Spiderhunter (E) are also main target species for many visiting birders; fortunately I had already seen both species previously.

While preparing my gear before venturing out on foot, one of the first birds I got on was a pair of Cinereous Bulbuls (E), feeding on a fruiting tree right at the entrance to the RIC. They were gone before I got around to readying my camera, however.


I began walking up the road, taking advantage of the wide, grassy shoulders as trucks motored past. It was not the most scenic birding I had ever done, but new birds were around nearly every bend since the elevation here was lower than at Mount Kinabalu, providing habitat for a different subset of species. Sunda Cuckooshrike, Dark Hawk-Cuckoo and Asian Brown Flycatcher were quickly added to my list.

Some movement in a roadside tree morphed into a pair of Bornean Bulbuls (E) foraging on fruits. I enjoyed watching them for about 5 minutes before we went our separate ways; them down the slope, and me up the road.


Certain bird species seem to be ubiquitous wherever you travel. In much of Eurasia, Gray Wagtail fills that role and I found that they were particularly numerous in Borneo. The mountains seem to collect a sizable wintering population each year.


After an hour and a half of walking I turned around to retrace my steps. The birding had been good but the traffic noise was becoming a little frustrating. It seemed like the vehicles were spaced out perfectly so that the sound of the first vehicle would still be audible by the time you could hear the next vehicle approaching. Frustrating, especially when most of the bird identifications are made initially by sound.

Along the way back to my vehicle some roadside rustling caught my ear. I do not currently have a good resource to identify skinks in Borneo, of which there are numerous species. One day I will identify this one!


I returned to the RIC to have some breakfast (leftover trail mix and a few cookies) and watch/listen for birds around the fruiting trees within and adjacent to the center. Mountain Barbets (E) were vocalizing everywhere but I had no luck with Bornean Barbet (E) or Bornean Leafbird (E), which are frequently seen here. While the barbets were vocal, try as I might I could not spot any sitting high in the trees. Who knew such colorful birds could be so difficult to spot, but I guess it makes sense considering that green is their dominant colour. There were not many fruits in the trees lining the roadside, perhaps explaining the absence of the leafbirds. Like several other species found in this part of the world Bornean Leafbirds (E) are somewhat nomadic, being found wherever the fruiting trees are. Bird activity was beginning to wind down by 8:00 AM and feeling a little restless I decided to drive east for a few km, to bird near the Makalob waterfall at a slightly lower elevation.

Due to a gate blocking the path I wasn't able to reach the actual waterfall so I was stuck to roadside birding once again. I still had very little energy, so I decided to sit on a roadside guardrail overlooking an area of forest with decent visibility to the canopy. A Bornean Barbet (E) suddenly fired up and began its long, continuous song of rapid "tok" notes, which would continue for well over a minute straight! My first Bar-winged Flycatcher-Shrike also appeared in the canopy. As it was now almost 9:00 AM I headed back to the RIC where the owner had opened the gate by the time I had returned. I walked around for a while on the grounds without seeing a whole lot, but a flyover Rufous-bellied Eagle and this Blyth's Hawk-Eagle were great to see.


This locust was resting on a wooden beam beside the main path. After I disturbed it, the insect hopped onto the ground, spread out its wings, and hopped forward while displaying the vivid black and orange pattern on its hindwings. 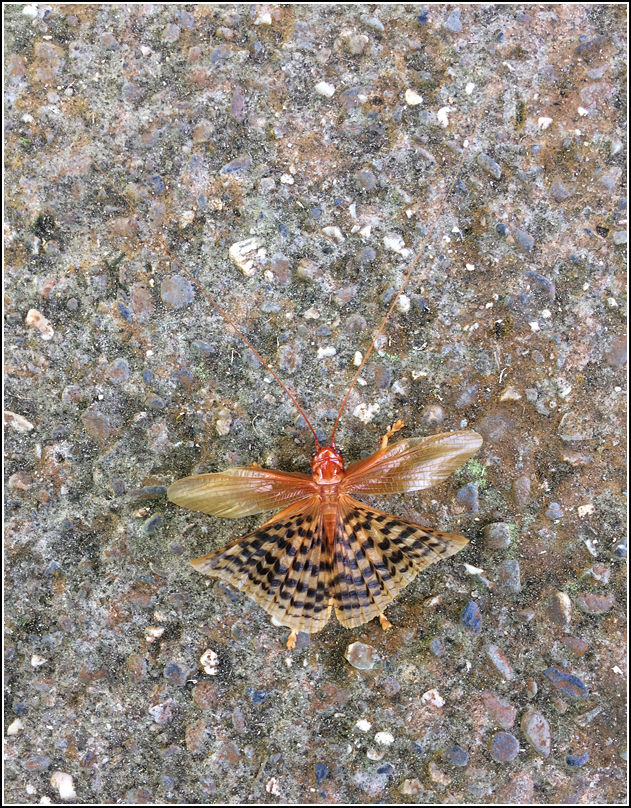 I was feeling pretty famished at this point as I had neglected to eat dinner the evening before, and my breakfast consisted of some trail mix and cookies. I made a pit stop at the Gunung Alab Resort and ordered a big plate of fried rice, a hamburger and a coke from the restaurant, which seemed to do the trick! It was fun to have some authentic nasi goreng in Borneo (directly translated to fried rice), as it was a meal I would occasionally have as a child. Some of Dutch cuisine is borrowed from Indonesian cooking, since Indonesia was a former colony of the Netherlands (known as the Dutch East Indies).

I spent the afternoon by taking the only side-road found off of the main road. Called the Gunung Alab substation road, it climbs higher into the mountains to a telecommunications base. While I had already seen most of the target birds that one can see in the upper elevations of the Crocker Range, I was looking forward to exploring a new area that wasn't beside a busy road. The higher elevation also ensured that the cloud cover and reduced temperatures would enable the birding to be a bit more active during the middle parts of the day.  At one point I stood overlooking this valley, as a few Fruit-hunters (E) foraged in the bushes nearby, and a Blyth's Hawk-Eagle rose on the thermals above the hills, circling up from the valley below me. A small party of Pygmy White-eyes (E) also moved past along the hillside, their high, thin trills ringing out through the mist.

An early afternoon rainstorm was a good excuse to take a nap in my trusty steed... 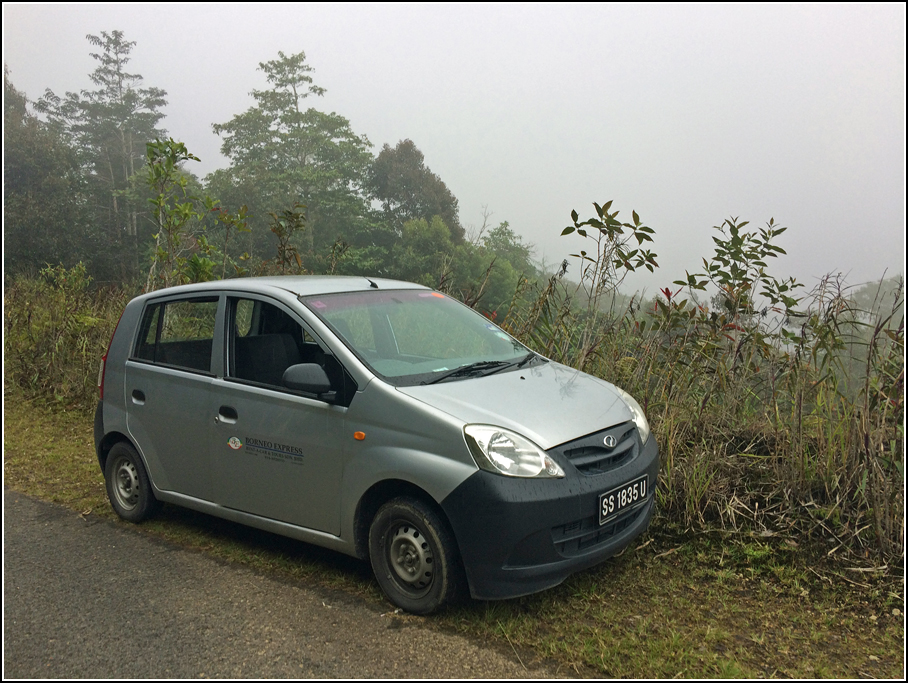 By 3 PM or so I was feeling rejuvenated and rested, so I headed back down the mountain. Returning to the Makalob waterfall, my plan was to walk along the road for an hour or two before dusk. The morning rush had already died down when I visited earlier in the day, so my hope was that the overcast conditions and later hour in the day would instigate bird activity.

This happened to be a very good call and I enjoyed a solid hour or two of birding. The rain held off for the most part and some of the birds cooperated. Ashy Drongos were particularly numerous but I was also happy to spot my first Spectacled Spiderhunter and Long-tailed Broadbill. A Cinereous Bulbul (E) gave me a second chance at a photo. This would be my only sighting of this species after the brief encounter from first thing in the morning at the RIC.


My first day in the Crocker Range had gone well. Regarding my target species, I had ticked both Mountain Barbet (E) and Bornean Barbet (E), though both were heard only. I had also seen and photographed both endemic bulbuls and heard Pygmy White-eye (E), yet I had struck out on Bornean Leafbird (E). My strategy for the following morning would be return to the RIC at an earlier hour which would hopefully improve my chances of connecting with both barbets as they are much more active first thing in the morning. I was also hoping to find Bornean Leafbird (E) somewhere! Once the morning rush was over I would likely start driving west out of the mountains towards Kota Kinabalu, before turning south and making progress towards my destination of Beaufort, near the Klias Peatswamp Reserve.