After waking the hotel desk staff I checked out and by 5:15 I was on my way to the Klias Forest Reserve, a short fifteen minute drive from the River Park Hotel in Beaufort. After turning off the main road, my headlights illuminated a shape on the dirt road which transformed into a Large-tailed Nightjar. I passed through a monoculture of oil palm plantation, the only birds present being the Yellow-vented Bulbuls, with males on territory singing away before dawn, and evenly spaced every hundred meters or so.

I drove up to the field station which was silent at this early hour, as expected. Fortunately the gate was open and after parking I made my way to the start of the boardwalk, just beyond some of the buildings. A several km-long boardwalk had been established at the edge of the peatswamp forest, heading due west into the heart of the forest, before reaching a Y junction. From here, the boardwalk continued as arms of the Y before turning and meeting up, effectively forming a triangle.


Peatswamp forests in Borneo are much different than peat swamps in the northern hemisphere. Instead of being composed of stunted trees, shrubs and an abundance of lichens and mosses, the tropical peatswamp forests can be highly diverse and contain trees up to 70 m tall. Peatswamp forests occur where waterlogged soils limit the decomposition of organic matter, over time accumulating to form a thick layer of acidic peat up to 20 m in depth. Peatswamp forests are usually coastal and are flooded for portions of the year. The lack of nutrients and harsh growing conditions in peatswamp forests enable a different suite of species to find habitat, many of which are endemic to that habitat type.

Most of the peatswamp forest in Borneo is found in Kalimantan (Indonesia), where few tourists visit and where rampant deforestation is reducing the peatswamp forest to a fraction of its former area. Since peatswamp forest is generally coastal it is easily accessible and highly exploitable to logging. Some of the largest areas of remaining pristine forest occur in the upper elevations, the high level of topographic relief providing some unintended protection. Peatswamp forest is not protected in the same way, and logging followed by conversion to oil palm plantation often ensues.


I was looking forward to exploring a different ecosystem and experiencing the species that came with it. In particular, I was hoping to find Hook-billed Bulbul, a peatswamp specialist only known from parts of Borneo and a difficult to reach corner of Sumatra. Because the Klias Forest Reserve is one of the only areas of peatswamp forest in Sabah, it is thus one of the more accessible places in the world to find Hook-billed Bulbul. That being said, only a portion of the birders who visit this area find success with the bulbul. In addition to my main target, I had a few other peatswamp specialists that I was hoping to cross paths with. These including Brown-backed Flowerpecker, Scarlet-breasted Flowerpecker and Gray-breasted Babbler.

I waited at the Y junction as the rising sun instigated early morning bird activity and I quickly began to hear and occasionally see new birds. It was my first experience birding lowland forest in Borneo so most species were new and exciting. A Red-naped Trogon sat quietly deep in the woods, providing an excellent study as the muted early light cast a softness to its plumage, while a Red-billed Malkoha, pair of Crimson Sunbirds and numerous Red-crowned Barbets also made appearances. My first target to fall was Gray-breasted Babbler when I head an individual singing to the south of the Y junction. I tried to lure it closer by playing a snippet of song, but all it did was cause the bird to go silent and refuse to appear. Perhaps this is another species that is "taped out" at this location.


While I was peering through the understorey hoping to catch a glimpse of the Gray-breasted Babbler an unknown shape glided in and promptly disappeared behind a large trunk. I initially thought that it was a small bird or perhaps even a stick insect; I only caught the movement of the shape out of my peripheral vision. I was pretty surprised when this gliding lizard appeared on the side of the tree!


One of the ecological curiousities in Borneo is the high amount of "gliding" species which are found across the island, from squirrels, to lizards, to snakes, to treefrogs, to colugos, and several others. Growing up I was fascinated with these species so it was a bit surreal to see my first Draco lizard in the flesh. After a few quick photos, of which I had to resort to an ISO of 3200 to obtain a somewhat clear image, the lizard zipped around the side of the trunk and up.


Several intense storms in the previous few weeks had caused some carnage in the form of trees strewn across the boardwalk. Maintaining this boardwalk must be a fair amount of work as the seasonal flooding combined with the high heat and humidity must work away at the boards and support beams, not to mention having to deal with large trees crashing down across sections.

This awesome teal and red stick insect alighted on the handrail beside me. This species ended up being fairly common and in my estimation I saw around five throughout the morning. 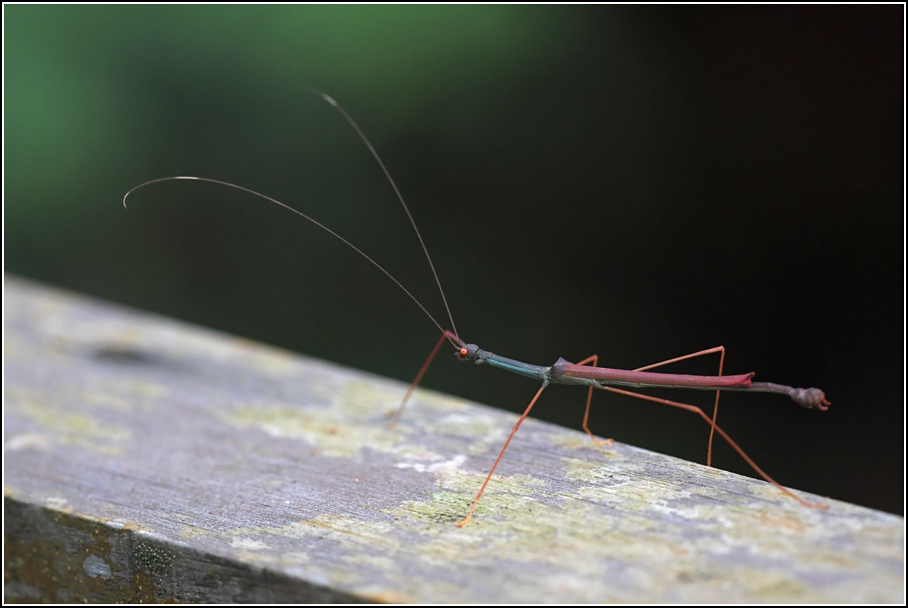 As the minutes ticked by and the temperatures rose, the birding slowed. Occasionally I would hear a new vocalization but since it was my first time in the lowlands I had a lot of species to learn. I think I made OK progress throughout the morning but it was tough going at times. Some of the species were a bit easier when I spotted them in the canopy, including a family group of Rufous Woodpeckers, a pair of Fluffy-backed Tit-Babblers, a Black-winged Flycatcher-Shrike and this Lesser Cuckooshrike. Other remained heard only including a Raffle's Malkoha and Thick-billed Pigeon.


Several hours had passed by the time I reached the back portion of the Y, but the birds were still singing and active despite the rising sun in the sky. A pair of Scarlet-breasted Flowerpeckers grabbed my attention from across a clearing, settling in the lower branches of a tree for a few moments before flying off. Not long after the dueting song of a pair of Bold-striped Tit-Babbler caught my ear. The pair were furtively sticking to a thick tangle, occasionally providing brief glimpses.

I had trained my ear to the unusual call of the Hook-billed Babbler by listening to my recordings numerous times in the preceding days. While walking along the boardwalk I thought I heard one distantly call and a few seconds later the calls continued. Eventually I tracked down the birds - three in total - and had an awesome five minutes watching the birds slowly work their way through the undergrowth. It's namesake feature, the strongly hooked, powerful bill, was easy to appreciate from close range. Its unusual bill (for a bulbul) assists in its procurement of large insects and other prey items, which it consumes along with fruits.

The dense undergrowth made photography difficult but eventually I managed a few shots that were not completely blurry or obscured by vegetation. The bubuls' vocalizations, however, were a little easier to record.

The rest of the morning was thoroughly enjoyable as I slowly strolled along the boardwalk, even as bird activity began to quiet down. At times the rustling in the dry leaf litter beneath the boardwalk gave away the location of one of several species of small lizards. This particular skink lingered on the edge of the sunny boardwalk long enough for me to snap a few photos.

Greater Green Leafbirds are one of the species that have been hit hard by the cagebird trade, due to their song. Fortunately they remain reasonably common in protected areas in Sabah.


At any given moment, a glance up into the sky would see several dragonflies or butterflies cruising past.

After completing the triangle section of the boardwalk I began heading back to the main center and parking lot. Along the way I ran into a British couple who had arrived to photograph birds. They asked me about what I had seen, so I mentioned a handful of the bird species that I had seen, and mentioned how it was a really great morning for birding. They had not seen anything on their walk down yet, and unfortunately it was now later in the morning with bird activity much reduced.

On the walk back I studied some of the bulbuls I came across, trying my best to learn the plumages of a few similar-looking, brownish species. My first Changeable Hawk-Eagle soared overhead and I also found my first Thick-billed Spiderhunter, Scarlet Minivet and Ruby-cheeked Sunbird. The last new bird was a Greater Coucal which glided across the boardwalk into a section of dense shrubbery.

It was around 11 AM by the time I had returned to my car. I paid for my entrance fee and rehydrated, planning my next move. The previous day I had made a mental note that their was a Pizza Hut in Beaufort. After a few days of eating local food I was ready for some pizza, and sitting in the air conditioning also sounded excellent. I drove to Beaufort, visited the Pizza Hut which was extremely overpriced compared to the other food options, and hit the road. My plan was to make the two hour drive back to Kota Kinabalu and grab a hotel since my flight to the city of Sandakan was scheduled the following morning. Along the way I stopped at some flooded rice paddies and pulled off onto the shoulder despite the busy traffic. According to my weather app, with the humidity it felt like 46 degrees out and it was a bit of a shock compared to the cool environs of my car!


The birding was excellent and I made do without a scope. Among the species were a few Long-toed Stints and Lesser Sand-Plovers, my first of either species. Several distant White-winged Terns were also picked out as they foraged over some of the distant lagoons and I found my first Yellow-bellied Prinia in long grasses near the roadside. Further down the road I came across a Brahminy Kite and this Black-shouldered Kite, which provided a great photography subject.

That evening I checked into the Putatan Platinum Hotel, located only a few minutes from the airport. I took the evening to relax, organize my gear, and sort some photos on my computer. The following morning I was flying to Sandakan, where I would transfer to the hotel in Sepilok to meet up with my group.