I awoke well before dawn and listened to the light rain falling gently on the roof of my cabin as I waited for the morning to come alive. The rain did not last long; in fact it had completely stopped by the time our group assembled at 6:30 to begin our first walk of the day, though a light fog lingered in the air.


Our guide, Ben, snapped this photo of a Bearded Pig that was hanging out on the lawn near his accommodations early in the morning.


Eager to see what the morning had in store, we headed off down the entrance road, where the clearing created by the road provided visual access to the many layers of foliage surrounding us, making birding a bit easier at that early hour. Walking in the mist, while being flanked by giant Koompassia and Shorea trees was a pretty cool experience. Even apart from any wildlife sightings, just being surrounded by the trees was reason enough to enjoy the walk.


Of course, we had some success with wildlife as well. Our guide Azmil was an exellent birder, picking up on nearly every vocalization and identifying them with ease. As I was still getting used to the sounds of the lowlands it was pretty helpful to have him around to help figure out identifications. There's only so many different babbler songs my brain can learn in one day.  Speaking of babblers, we had three new species on the walk - Ferruginous, Chestnut-rumped and Rufous-crowned - along with our first Maroon-breasted Philentoma and a stunning Diard's Trogon.


Here's Ben admiring one of the many millipedes that adorned the roadside. 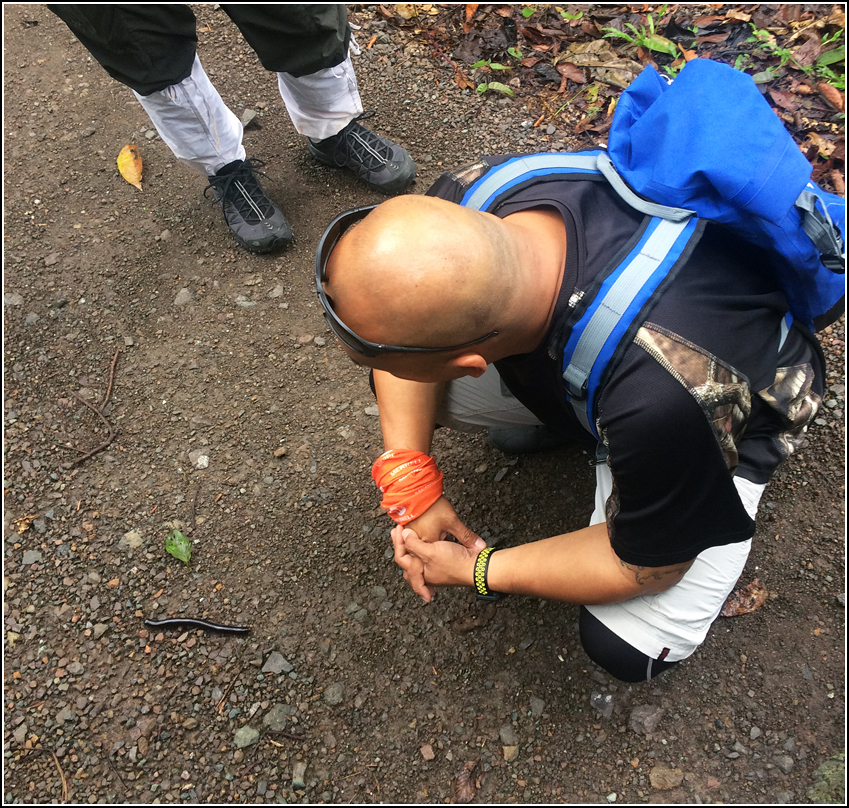 The resonating calls of a pair of Rhinoceros Hornbills reverberated down from somewhere beyond the canopy, and two of the gigantic birds soared in to land at the top of a roadside tree. Even in heavy fog, the species is unmistakable due to the distinctive casque on its head.


Eventually we arrived at the start of the canopy walkway to begin our ascent.


While not as sturdy as the galvanized steel structure at Sepilok, this walkway was arguably more impressive due to its height and length as it stretched a greater distance through the canopy.


While we were resting at one of the viewing platforms hugging a giant tree, some movement drew our attention to a distinctive black bird with a short crest - a Bornean Black Magpie (E). Azmil informed us that sometimes the magpies follow Bornean Bristleheads (E) around and suggested that we be on the lookout for the highly sought after endemic.  It was not two minutes after he mentioned this that I got on a bristlehead, followed by several more.


We spent around 15 minutes watching the small group of Bristleheads as they moved in the canopy. We even were treated to some of their vocalizations, while some of the closer individuals provided scope views. I was pretty thrilled with our luck!


Have I mentioned yet how impressive the forests of Borneo are? The views from on the canopy walkway were awe-inspiring to say the least. It was difficult to properly photograph the trees to convey the same sense of wonder; this poorly-spliced panorama is perhaps my best attempt.


Eventually we reached the end of the walkway and were soon back on level ground. The mist had partially burned off during our hour in the canopy, making visibility of the distant tree tops a little improved.

Up to this point we had observed five out of the eight hornbill species found in Borneo, but were missing arguably the most impressive - Helmeted Hornbill. Not for long however, as the fruiting Ficus where we had seen the Rhinoceros Hornbills earlier, now was occupied by a Helmeted Hornbill!


Not only did this impressive bird provide great scope views, but we heard a different, nearby individual perform the incredible song which this species is quite well known for. Starting with single hoot notes that very slowly accelerate over the course of several minutes, the song climaxes with maniacal laughter that echoes through the forest. To hear this song in the wilds of Borneo was pretty awesome!


The fruiting Ficus was not just being occupied by the hornbills, as a male Bornean Orangutan was also feeding on the abundant food source. He was a little obscured by branches but appeared to be a flanged male as well. We all enjoyed excellent scope views as he slowly fed in the canopy - our fourth Bornean Orangutan in three days.

Along the way back we finally observed a stunning Black-crowned Pitta (E), and heard our first Blue-headed Pitta (E).


It was approaching 9:00 AM when we returned to the lodge for breakfast. Even meal times at the Borneo Rainforest Lodge are rarely without wildlife, a testament that proved true again as a group of Long-tailed Macaques fed on some fruiting shrubs beside the lodge.


After breakfast we headed out to explore a side trail deeper in the forest in an attempt to see Red Langurs, a species that had eluded our group so far. Anyone who has explored the lowlands of Borneo is surely aware of the terrestrial leaches that can be positively abundant in the right habitat. These species can be more than a nuisance for people and animals in Bornean rainforests due to their blood-sucking tendencies. The Brown Leech (Haemadipsa zeylanica) and the Tiger Leech (Haemadipsa picta) pictured below are the two culprits, and the reason why it is highly recommended that you wear leech socks on a trip to the lowlands of Borneo. Most of us picked numerous leaches off of our clothes, and rarely our skin, during the hike. I somehow avoided involuntary blood donation, despite being the only member in our group without leech socks.

The hike was enjoyable though wildlife sightings were not too numerous. We passed some fresh Clouded Leopard tracks; a reminder that the species is relatively common, though rarely seen in these forests.

Eventually we reached an area where the Red Langurs are often seen and sure enough, about half a dozen individuals were feeding in the mid-canopy. The harsh lighting and and distance to the langurs limited the photographic potential, a common theme in thick jungle.


We returned to the lodge after our successful foray into the forest, though we did pause once more at the fruiting Ficus along the road to watch the hornbill and orangutan show. The fog had burned off a little more, making it that much easier to see finer details in the scope.  On the way back we heard our first Dusky Broadbill, but even with playback we were unable to call it in for the group. Can't get them all!

Despite feeling famished prior to lunch, the meal itself was not even the main highlight. In fact it was a certain dinner guest that joined us.


This Paradise Tree Snake was basking quietly along the edge of the balcony extending out from under the roof of the main lodge where we were sitting. I took the opportunity to catch the beautiful snake to show the rest of my group.


I was pretty thrilled to have crossed paths with this species. Ever since I was a little kid I had wanted to see a Paradise Tree Snake - a.k.a. Paradise Flying Snake - a species whose image was burned into my brain after watching documentaries about the species. How cool is it that we were looking at a flying snake!


Of course the species does not fly, but is yet another member of the gliding guild in Borneo that also contains colugos, squirrels, lizards and frogs. The Paradise Tree Snake is able to spread its ribs out to become ribbon-like, which enables it to glide a significant distance from one tree to another. There is some evidence that the species is able to control its trajectory by undulating its body as it travels through the air. I encourage you to check out video online of the species gliding as it really is incredible.


The snake was quite calm throughout the ordeal and eventually, once everyone had had a good look, I released it back onto the balcony where it sat for the next few minutes. While we did not see it "fly" it was a pretty awesome experience with one of the prettiest Bornean snakes.


After lunch we took a three hour break during the heat of the day. I napped for half an hour or so and spent the rest of the time birding around the grounds and along the banks of the nearby Danum River. Given the time of day things were a little slow, but I did come across my first Spotted Fantail and Malaysian Blue Flycatcher, while also watching the antics of several large Asian Water Monitors. Returning to my cabin for a few minutes, I paused to photograph this Striped Tree Skink (E) (Dasia vittata) hanging out on a neighbouring cabin.


Whiskered Treeswift is one of the more distinctive bird species found in Sabah, and I was eager to cross paths with them in the Danum Valley. While I did not come away with the photographs that I hoped, at least the views were great! This individual was sallying out from a dead snag located right beside the main lodge.


By 4:00 PM we had all assembled for our afternoon walk. The cloud cover had persisted all day, though the rain had held off, but it meant that the conditions would be gloomier than normal for our afternoon hike. We decided that we would stick to the main entrance road due to the improved visibility here compared to the dark understorey of the forest. This ended up being a worthwhile decision as we enjoyed several great sightings. The flanged male Bornean Orangutan was still in the same Ficus tree feeding away on the abundant fruits. There were some tense moments as we watching him climb to the very end of the smallest branches to reach for the furthest fruits. But I guess it was not his first rodeo and he did not fall!


At one point I stopped because I heard another Black-crowned Pitta (E). This one was a little more cooperative than the one from the morning and with a little encouragement he popped up onto a log to sing back to us. Everyone had decent views in the scope as well, giving us a full appreciation of his bright colours.


While returning to the lodge after our walk a pair of Bornean Crested Firebacks (E) appeared on the open lawn, only a few meters from my cabin, actually. Yet another endemic seen - this time, a pheasant with a cool hairdo.


We enjoyed a delicious dinner as dusk turned to night, after yet another amazing day in Borneo. That evening we went on a night walk, but I'll leave that until my next post as this one is getting a little long already.