At some point during the night I heard the distinctive calls of a Zigzag Heron calling from somewhere near the creek. This secretive heron is local and rare in Amazonia, though Sani Lodge is known as one of the locations where this species can be found somewhat regularly. I tried a little bit of playback at the creek pre-dawn but had no response.

I was not really surprised when the promised birding guide did not show in the morning, despite Gustavo confirming it the night before. The story had changed once again  - apparently we would be meeting him later that afternoon back at the main lodge. The good news was that we would be spending our final two nights at the main lodge, however. While the campsite is more than adequate, it would be nice to have the luxury of our own cabin again.

Our plan for the morning was to return to the canopy tower for a morning stakeout, but as is often the case, the weather gods had other ideas. Under a steely gray sky and with mist hanging in the air, Sergio and Gustavo paddled us back to the tower. We had our ponchos on at least, and would make the best of it.

The mist and fog really hampered visibility on the tower and bands of rain passed through on four occasions. We made good use of our ponchos and for the most part I kept my camera securely stowed away in my backpack. 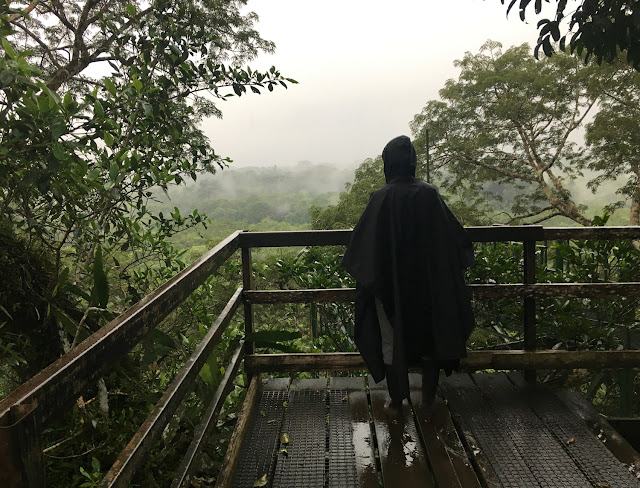 But despite the difficulties caused by the weather, the birding was pretty steady. Several mixed flocks moved through "our" tree, providing very close views of species that are otherwise very difficult to see. One of these flocks was composed of several tanagers and flycatchers, including Opal-crowned and Opal-rumped Tanagers. I was really hoping to see the spectacular Paradise Tanager but we had no luck there. At the time of this writing it is the most likely "lifer" I can get in Ecuador, according to eBird.


Some of the birds that passed through the canopy were species high on my target list, including Slender-footed Tyrannulet, Yellow-browed Tody-Flycatcher and Lemon-throated Barbet, the latter of which Laura spotted and got me onto. Photography was tough with the lighting, however.

A tray feeder had been installed on one of the kapok's branches. A small flock of Gilded Barbets monopolized it for a while. The Purple Honeycreepers, Blue Dacnises, Green Honeycreepers and several euphonias also showed some level of interest in the fruit.


The light rain did not deter the charismatic Black-headed Parrots.


The sun would peek out for a few minutes in between bands of rain, and visibility would increase as a result. It was during these times that I would man the scope to try to pick up cotingas, flycatchers, raptors and anything else that may be perching at the tip of a distant tree. One of my top remaining target species was the White-browed Purpletuft, while the rare Purple-throated Cotinga has also been reported from here on occasion. Unfortunately I had no luck, though there were numerous Plum-throated and a couple of Spangled Cotingas to look at instead. Nunbirds were also well-represented with both Black-fronted and Yellow-billed observed well, while I also saw my first Sulphury Flycatcher and Crowned Slaty Flycatcher.

Three species of swifts were noted - Fork-tailed Palm-Swift, Gray-rumped Swift and Short-tailed Swift. The only species that came close enough for an attempt at photos was Short-tailed.

Those who have birded with me in the tropics know my disdain for parrots, parakeets and other psittacids. Most of them sound roughy the same (loud, annoying squawks) and they are often only seen as backlit shapes flying fast, high overhead. But that doesn't mean I am annoyed by ALL psittacids. This pair of courting Blue-and-yellow Macaws was fascinating to watch, and the species' plumage is just spectacular (especially in flight).  Like several other macaw species, Blue-and-yellow Macaws will typically mate for life.


We enjoyed a nice variety of raptors throughout the morning. A pair of Slate-coloured Hawks put on a show while the nesting Double-toothed Kites were always around. An Ornate Hawk-Eagle flew around for a minute, Plumbeous Kites and Roadside Hawk were accounted for, and three species of vultures were noted. This young Broad-winged Hawk took advantage of a thermal and effortlessly drifted right over our heads. In only a month's time it would likely find itself in Canada.

Laura has a knack for finding lizards or really, anything that is well camouflaged. She impresses me time and time again with this skill and she came through once again, while we were all up on the tower. This is an Amazon Bark Anole (Anolis ortonii).


The anole would occasionally complete some pushups while fanning out its incredible dewlap, a typical display that is often done between competing individuals.

Despite the rain we were happy with our four hours on the tower. By the time we had walked the kilometer or so back to the boat, the rain had begun in earnest once again and the ponchos came back on. 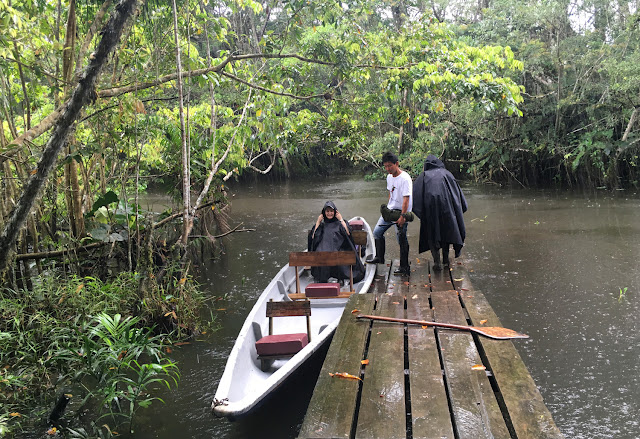 There is a certain level of anticipation that occurred whenever Gustavo and Sergio paddled us from one place to another through the flooded forest. Anything could appear at any time, and it often did.  A Sungrebe appeared deep in the undergrowth, dove underwater, and then appeared briefly directly in front of us, allowing Laura and I to both get our bins on it. I even managed a (terrible) record photo this time! I was also really hoping for the secretive and beautiful Agami Heron, but it was not meant to be on this occasion. 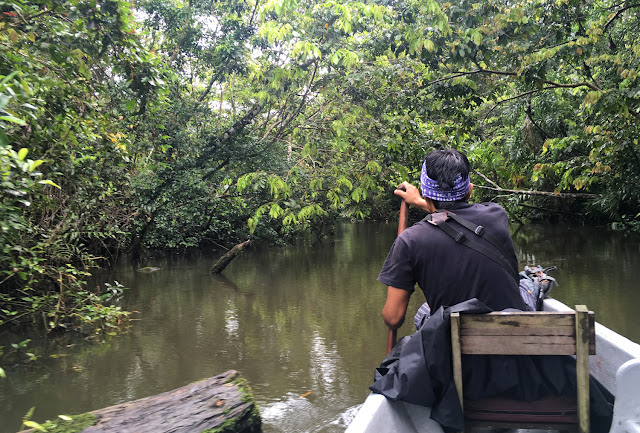 An immature kite perched at the water's edge appeared to be a Snail Kite. That long, hooked bill is ideal for extracting the flesh of large snails.

Other highlights on the roughly hour long paddle back to the main lodge included our first Gray-crowned Flycatcher, Speckled Chachalacas, and a Silvered Antbird which I picked up by its call, but which never came into view. We also observed a couple of handsome Capped Herons and I managed to finally obtain a photo I was happy with!


The oxbow lake upon which the lodge is situated is an excellent location to view birds with the mix changing frequently. Two staples, however, are the White-banded Swallows and Greater Anis which were usually plentiful.

Following a well-deserved afternoon siesta (especially for Gustavo and Sergio who had done all the paddling!) we set out again by boat to explore some of the other little waterways that snaked into the forest near the lodge. 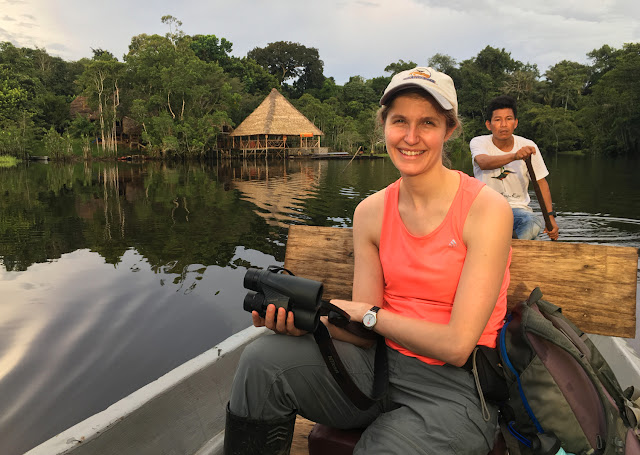 It was an utterly spectacular evening to be out on the water. Flocks of anis and oropendolas streamed overhead, special birds revealed themselves around every bend and small groups of monkeys were heard crashing through distant treetops. Occasionally the still of the air would be broken by a loud splash brought on by a caiman or arapaima.


We swung by a location where someone had strung up a bunch of bananas above the waterway. A small group of White-fronted Capuchins were inspecting the goods and a few Common Woolly Monkeys were nearby, providing our first good looks at this very fuzzy primate!


We watched the sun set over the oxbow lake - another day in paradise.


That evening the four of us headed out for another night-walk, though Gustavo and Sergio were probably getting a little tired of them by this point! We were working them hard during our time at Sani with early mornings and late evenings. We were all dragging our feet a little bit for this one and only stayed out for about an hour.

A really nice surprise was a couple of Spix's Night Monkeys that were busy feeding on some fruits above the trail. Awesome looks, though the photos were difficult with a macro lens and they barely qualify as "record shots"!

Sergio discovered a huge Smoky Jungle Frog near the end of the walk. The little kid in me could not resist...


Some rustling in the trees above alerted us to a Kinkajou!


I'll finish with a photo of an Amazonian Climbing Salamander, one of several observed during our hour in the forest.

The next morning we planned on exploring some of the river islands along the Rio Napo, a much-anticipated event for me. Word was that Gustavo's uncle, the bird guide, would be joining us in the morning but Laura and I knew better than to trust him at this point. Even if he didn't show, as long as Gustavo could get us to the right islands I was sure we would be able to find at least some of the specialties. It was going to be a good day!