We interrupt the regular scheduled programming of blog posts from our trip to Ecuador in March with a current update! Laura and I arrived in Ecuador last Friday and have spent just over a week in the country so far. We have been based in the city of Quito for the entire time since we are taking Spanish lessons for four hours a day, Monday through Friday. Last Friday was a bit of a tough one for me since I was dealing with the aftermath of a stomach bug, but fortunately the travel went relatively smoothly. We were both very happy to arrive at our hostel late on Friday!

Since school did not start until Monday, we had the entire weekend to acclimatize ourselves and do a little bit of exploring in the city.  Fortunately I was feeling much better on Saturday so Laura and I decided to explore a park near our hostel called Parque Itchimbia.


Quito is located at an elevation of approximately 2,850 m and is situated in an inter-Andean valley. While both slopes of the Andes receive ample amounts of rain, which produces lush vegetation and a high species diversity, the inter-Andean valleys are relatively dry with low bird biodiversity. It doesn not help matters that much of the original vegetation has been removed as well, further decreasing potential diversity. It is therefore difficult to see 30 species of birds in a day in Quito.

Despite the low diversity we had fun exploring Parque Itchimbia, re-familiarizing ourselves with some of the common denizens like Eared Doves, Great Thrushes, Golden Grosbeaks and several species of brush-finches.

The sun peeked out for most of the walk as well. This instigated many insects to take to the wing.

I lucked out and discovered two species that were new for my list - a single Band-tailed Seedeater foraging on some grasses and a small flock of Rufous-chested Tanagers, a specialty of inter-Andean valleys.


On the Sunday we decided to switch things up and explore the botanical gardens, found within Parque La Carolina. It was about a five kilometre walk from our hostel but we were up for it - it felt good to stretch our legs. The park was very busy since it was a Sunday but we were still able to find some quiet moments within the gardens. The birding was rather slow but we enjoyed watching the Sparkling Violetears and Black-tailed Trainbearers as well as a few Vermilion Flycatchers (always a treat to see!).

From Monday to Friday we have had a typical routine of breakfast by 7:5 at our hostel, walking the fifteen minutes to the school, having class for four hours and walking back to the hostel. Generally our brains have felt like mush following the Spanish lessons so we would usually chill for a bit in the afternoon, followed by some exploring of the city.

We have been enjoying the local food as well. Below is a specialty of the region; a potato, cheese and avocado soup known as locro quiteño. 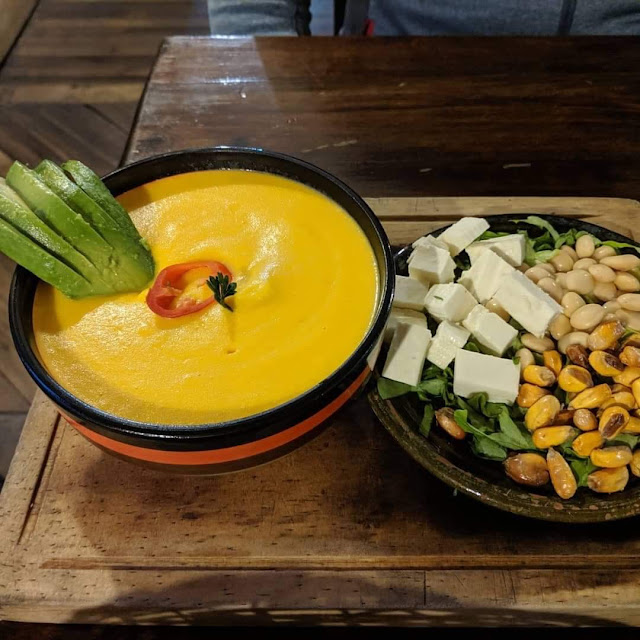 Food is quite cheap in Quito, especially when you leave the main tourist areas. The following meals were 3$ each! 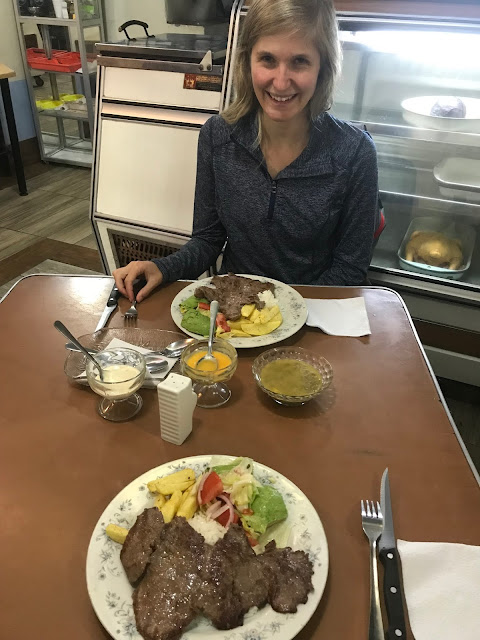 On one of the afternoons I returned to Parque Itchimbia on my own for a few hours in the afternoon. The bird life was largely the same with a few additions. I finally saw my first Blue-and-yellow Tanagers for Ecuador as well as a few other odds and ends such as a Gray-browed Brushfinch and a Tyrian Metaltail.

Laura and I were feeling a little nature deprived following a busy week in the big city. We decided on visiting Mindo, a small town situated in a valley in the western Andes, for a weekend full of herping, birding and mothing. We bused over yesterday afternoon and upon arrival, breathed in the fresh air while Bronze-winged Parrots flew overhead. Ahhhhh. :)


I'll post about some of our finds here in Mindo in the next little while.
Posted by Josh Vandermeulen at 14:36