When Laura and I decided to begin our trip in Ecuador, the possibility of civil unrest was not really something we were worrying about. But of course, the timing of our trip could not have been worse. During the middle of last week the president of Ecuador, Lenin Moreno, decided to immediately scrap all fuel subsidies, which had been in place for the last four decades. Moreno decided to cut public spending as part of a loan agreement with the International Monetary Fund (IMF). This caused the average price of diesel to rise from $1.03 to $2.27 per gallon, and gas to rise from $1.85 to $2.30 per gallon. As a result of these drastic increases there have been widespread strikes across the country. Both the taxi and bus unions suspended their services, there have been widespread marches and demonstrations, nearly 400 people have been arrested and the government has declared a "state of emergency", a measure that gives the military additional authority.

As this was happening last week, Laura and I were based in Otavalo for the first of two weeks studying Spanish in this city. On Thursday the bus and taxi strikes began, and many people did not/were not able to come in to work. On Friday most of the stores were closed as the strikes continued and the city seemed to be a ghost town. On Saturday the famous Otavalo market was cancelled and almost every store was closed; but we fortunately were able to find a single Korean restaurant that was open last night, so at least we could have dinner.  On all the major roads leaving the city there were roadblocks set up, with trees cut across the road and tires burning in the street.


On Friday it was announced that the public transport strikes had ended across the country, however that has not been the case here in Otavalo. Apparently some of the student groups and indigenous groups have continued to strike, and here in Otavalo the situation does not appear to be improving. There are long lineups whenever one of the grocery stores decides to open for a few hours and it is still nearly impossible for anyone to leave the city. We have heard that it is ramping up to another nationwide strike on Wednesday, October 9. Laura and I have classes scheduled in Otavalo until Friday, at which point we have a cabin booked for six nights in the eastern Andes, accessible from Quito. We are at the point now where we are trying to get out of Otavalo back to Quito (where things are a bit more stabilized) as soon as possible. This is our main priority; needless to say whatever happens with our remaining Spanish classes is very low on our priority list at the moment.

This weekend we had a cabin booked deep in the mountains at the Intag Cloud Forest Reserve; unfortunately we had to cancel since there was no way we could get there. Fortunately our AirBnB host was very accommodating and happy to refund us despite the short notice. We have been stuck in the city and have been only able to get around by foot.

Despite the difficulties that this civil unrest has caused, Laura and I have tried to make the most of our time here. We have completed several long walks to explore nearby natural areas. Otavalo is located at an elevation of around 2500 m ASL and is situated within a dry inter-Andean valley. As a result species diversity is not especially high but there are some avian species of interest to search for. Two of the main specialties of the region are both found in the reed-beds surrounding Lago San Pablo, a lake that is only a few kilometres from Otavalo. These are the Ecuadorian Rail and the Subtropical Doradito. Last weekend Laura and I made a day of exploring Lago San Pablo and had a lot of success!


Laura and I had no trouble finding Ecuadorian Rails at the first location that we explored - some large reed-beds along the north side of the lake. Playback was not even necessary as we ended up seeing at least three individuals and hearing several more. It was almost too easy!


For those people reading this blog who thinks that the above Ecaudorian Rail bears a striking resemblance to a Virginia Rail, that is because it is a Virginia Rail. While some authorities consider it a different species, others (including the American Ornithological Society) treat it as a subspecies of Virginia Rail. This subspecies, however, is restricted to high Andean lakes and other wetlands in a narrow band from southern Colombia to southern Ecuador. These birds are located several thousand kilometres from the rest of the Virgina Rails in North America and northern Central America; surely it is a different species. Its vocalizations sound different as well.


Another species that is targeted by visiting birdwatchers is the Subtropical Doradito. It is a scarce species in Ecuador, found in similar habitats to the Ecuadorian Rail in some of the highland lakes. Subtropical Doradito has a relatively large range in the southern Andes down to central Argentina but it was one I had never caught up with before.

We struck out in the reed-beds at the north part of the lake so we decided to try to access a different location (Parque Acuatico) located at the southeast part of the lake, where the species is often reported. We were able to flag down a cab who took us there. Unfortunately because it was Sunday, the park was absolutely loaded with people and so I did not like our chances, but I was hopeful. After half an hour of searching a small yellow-bellied bird flushes into the reeds; likely a doradito but not a very good look. Unfortunately that was all that we would get in that section of the park. There were many other species to look at though, including flocks of Ash-breasted Sierra-Finch (another lifer) and Band-tailed Seedeaters, some Hooded Siskins, Golden Grosbeaks, Vermilion Flycatchers, Blue-and-yellow Tanagers and more. Of course, Cattle Egrets were abundant wherever there were cattle.

We took a lunch break and contemplated our next move. Not satisfied with our brief view of the doradito, we tried an additional location on the east side of the park. Finally, we were in luck. Two small yellowish birds came into view, hunting for insects in the reed-beds. It appeared to an adult along with a youngster. The adult was quite skulky but the youngster came out into the open on several occasions.

Compared to the adult (pictured later in this post), the juvenile has two brownish wingbars and is overall duller yellow underneath.

Below is the adult. It took quite a bit of time but eventually I was able to acquire some semi-decent photos.


There were a few shorebirds in the same area, including some Spotted Sandpipers and this Lesser Yellowlegs.


Another location that we have visited twice is the Peguche Waterfall (Cascadas de Peguche). We visited on an afternoon last week and were pleasantly surprised by the peacefulness of the area, the lack of other people, and the abundance of birds in the shrubbery lining the river.


The Yellow Himalayan Raspberry (Rubus ellipticus) is an introduced (invasive?) species that is very common along the riverbanks. However, the local bird species were making good use of this food source; especially the White-crested Elaenias which are abundant here.  I confirmed that the berries were quite delectable.


During our first visit Laura and I slowly birded alongside the river, picking up new species here and there. I was happy to finally have some good looks at Rusty Flowerpiercers while we also enjoyed the numerous Black-tailed Trainbearers, Tufted Tit-Tyrants, Blue-and-yellow Tanagers and Golden Grosbeaks.

Yesterday, Laura and I returned to Peguche with Emma, a friend of ours from Spanish school. We packed a lunch and made a day of it, climbing into the hills above the waterfall and exploring some new areas along the river. It ended up being a fantastic day of birding and I added quite a few new species including some rare ones.

Torrent Tyrannulets are commonly found along rushing rivers in the Andes. I had not encountered this species on our first visit to the waterfall, but on Saturday we found a handful of them flycatching along the river above the waterfall.


It was indeed a great day for flycatchers. In addition to the common White-crested Elaenias, Tufted Tit-Tyrants and the above-mentioned Torrent Tyrannulets, we also discovered Black Phoebes, Smoke-coloured Pewees, a Tropical Kingbird, a Streak-throated Bush-Tyrant and a Southern Beardless-Tyrannulet.

The biggest three surprises of the day occurred later in the afternoon. Laura and Emma continued on to Parque Condor to hopefully take in their bird-of-prey show, while I walked back to the creek to bird some more. I was not expecting to find a lifer, but a medium-sided, streaky flycatcher grabbed my attention. A Sulphur-bellied Flycatcher! This species is a migrant, breeding in Central America and wintering in South America. This individual was clearly a migrant, and the first one to have been spotted in Imbabura province, according to eBird. Excuse the terrible photo; the distance was quite far and I had trouble nailing the focus.


Compared to the similar Streaked Flycatcher (found at lower elevations), the Sulphur-bellied Flycatcher lacks rufous in the wings, has a more heavily striped face and has a yellowish belly.

The Sulphur-bellied was not the only migrant I encountered in this area. A female Scarlet Tanager and an American Redstart also put in appearances. Both of these species are scarce in the Otavalo area during migration, but birds have wings and anything is possible, especially during October when many species are migrating.

A low-flying Black-chested Buzzard-Eagle, with harassing American Kestrel in tow, was the last surprise of the walk. Soon I made my way back up a steep hill to meet up with the girls and continue our walk back to Otavalo. We all stopped to take a pano of this scene - Cerro Imbabura on the left, and Lago San Pablo on the right. 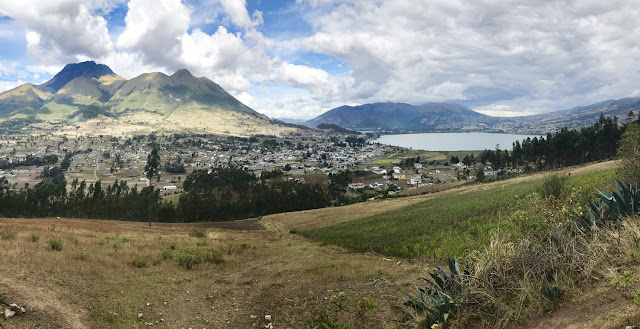 That's all I have for now. Wish us luck in getting out of Otavalo. I am super excited about visiting the cabins in the eastern Andes, within walking distance to the famous Guacamayos Ridge - hopefully we can get out of here by Friday to make our reservation. Stay tuned!
Posted by Josh Vandermeulen at 15:33

Some more great stuff, Josh. Hope that the civil unrest settles down and you can continue with your plans, but so glad you are able to make the best of a situation you have no control of. Stay safe!