Late last night I finally arrived back in Guelph after the whirlwind trip to the north. There were many ups and downs on this trip....but we stayed (mostly) positive and saw a lot of good birds!

Like I said in the previous post, Barb and I arrived in Sault Ste. Marie on January 24 around noon, giving us all afternoon to bird the city. Our first stop was in the north-east section of town along Fish Hatchery Road to search for the Black-backed Woodpecker. This bird was almost too easy as we found a very visible female only about 10 meters off of the road. 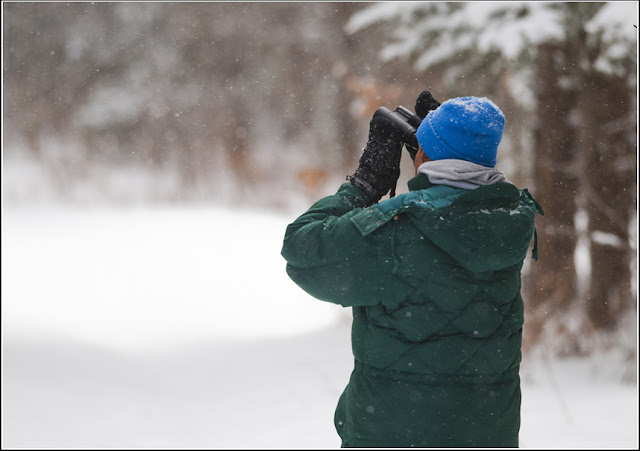 The bird was pretty good at keeping most of its body hidden behind branches at all time, making photography a challenge.

Extensive scaling was visible on most of the spruce trees in the area. Various Soo birders had seen a male bird at this location meaning that at least two birds are wintering here.


While here we saw our first Pine Grosbeaks of the trip! They would prove to be one of the more common birds, being seen and heard at almost every stop we made on this trip.

Dave Bell guided us (via texting) throughout the afternoon. This day in the Soo was an early highlight of the trip as we saw just about everything that was around. A stroll around the Locks produced quite a few good birds (and mammals), including this Red Fox which apparently has become quite tame.


While we were checking out the fox we heard the distinctive calls of a White-throated Sparrow near a feeder. According to Dave this bird has been wintering in the area.


This bird feeder consisted of an open jar of peanut butter fastened to a tree - obviously the chickadees liked it!


The highlight for me at the Locks was the flock of Bohemian Waxwings that flew over us several times. I counted all the specks in the frame (about half of the flock) and came up with 120-ish birds. So the flock was probably close to 250.


Barb and I found this very obliging owl. I'm sure its a new species for Ontario, if only we could identify it... 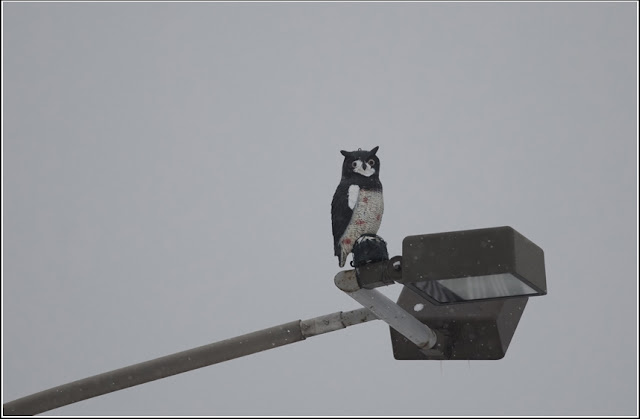 We also found a flock of redpolls containing at least 1 Hoary as well as a decent variety of waterfowl. That night we stayed at the Bell's place and feasted on a fantastic steak dinner they put on. Living the dream!

After the Soo, we had several of our targets already in the bag and so we left early to get to Marathon in decent time. Along the way we stopped in several towns to check the feeders. White River was particularly good and numbers of both Grosbeaks were around town. Evening was a year bird for both of us.


We spent a bit of time photographing the Pine Grosbeaks here - us southerners never got sick of them the whole trip (ok maybe a bit near the end).

We arrived in Marathon around 1:00 PM and immediately went to the feeder where the Harris's Sparrow was over-wintering. Michael Butler had checked in on it previously for us and reported that it was still present. As soon as we arrived, Barb went inside to chat with the homeowners, only to come back outside to see me taking photos of the bird. Nice bird and our first rarity of the trip in the bag! A few Cedar Waxwings were present which was also a year bird.


Later, Michael told us that we were really lucky to see the Harris's Sparrow - apparently it can be extremely difficult to locate during the middle of the day.

That afternoon after checking his feeders (tons of the usual finches including both redpolls), Michael gave us a bit of a tour for Three-toed Woodpeckers in Pukawska National Park. He has seemingly got it down to a science, but despite our best efforts we couldn't turn one up! The wind was a little strong and the birds are usually more easily found in the morning. However this snow-shoe clad hike was one of my trip highlights. It's not everyday that one can explore pristine spruce forest in the north, and it was fantastic to not hear other people or cars as we walked. The only year bird here was Gray Jay, though I was happy to spot a Northern Shrike at the top of one of the trees. This may explain why we did not find any Boreal Chickadees at this location.


Mike and his wife Martha cooked us an amazing chili dinner that evening and good conversation, stories, and maybe a little gossip flowed over wine. Throughout our stay at their place they were gracious hosts and very welcoming. Barb and I felt at home here!

That evening we went out for another snow-shoe trek to search for owls. While we were unsuccessful in that regard, it was great to explore the winter wonderland with the stars in the night sky appearing a lot brighter than they do back home.

The following morning after enjoying a hearty breakfast consisting of fresh fruit, sausages, bacon, eggs and coffee, I took the time to take some photos of Mike's feeder birds. I couldn't catch the Hornemann's that were present the previous afternoon, but I did get a chance to photograph "Mr. Creamy", a leucistic redpoll. Any thoughts on the species?


This bird we were debating whether it was a southern Hoary Redpoll or a Hornemann's. It did appear larger than the nearby redpolls and could very well be a female Hornemann's.

Your unidentified owl looks like 'Bubo virginianus plastico' to me. I've seen it many times in the GTA. Didn't know they ranged that far north tho. Excellent find!