I have now been home for a few days. The ebird checklists are in, some of the errands around the house are done, and I've made some decent headway in the photo editing. I haven't gone looking for birds once since I've been back (believe it or not), though that will probably change soon! At any rate, I have the photos from the first part of the trip edited so I figured I might as well make post # 1 of 4.

July 28, 2012
After a 6:00 wake up call, I said my goodbyes to Laura and drove over to Barb Charlton's place in Flamborough. From there, I met up with the rest of the crew and we all piled into two vans for the long drive to Cochrane. The entire group heading up consisted of Ken and Mike Burrell, Barb Charlton, Jean Iron, Deborah Cramer, Ian Sturdee, Andrew Keaveney, and myself. For the most part the drive was fairly uneventful though we did make a few birding stops at Mountsberg, the Powassan lagoons, and the New Liskeard waterfront, without any real highlights. That evening we pulled into the North Adventure Inn at Cochrane where we were staying for the night. I was happy to hear some Le Conte's Sparrows singing away in the field behind as the sun set.

July 29, 2012
This morning the 8 of us boarded the Polar Bear express and headed north to Moosonee. As the train traveled farther north, the surrounding countryside consisted primarily of black spruce and tamarack bogs. The entire ride lasted about 5.5 hours and was fairly uneventful, though I did see two new butterfly species from the train (Northern Blue and Common Branded Skipper)! We arrived in Moosonee mid afternoon and spent the rest of the day hauling gear to the MNR staffhouse, birding around town, and mostly, just sitting around and killing time.


July 30, 2012
Our helicopter ride to the coast was delayed a fair bit and we ended up waiting around for the entire day in Moosonee. Several of us checked out the sewage lagoons south of town for birds but there weren`t really that many birds! Most of the common duck species were present, including Lesser Scaup and Bufflehead, two species that I wouldn`t see for the remained of the trip. A few birds were still singing - a Northern Waterthrush, Least Flycatcher, and a good variety of sparrows.As afternoon gave way to evening, we got word that the chopper was ready to take us up to the coast so we made our way over to the airport. I amused myself for a bit by taking some photos of some of the aircraft on the tarmac. 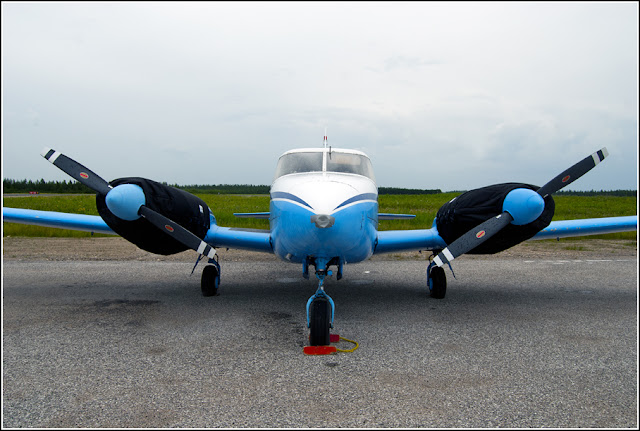 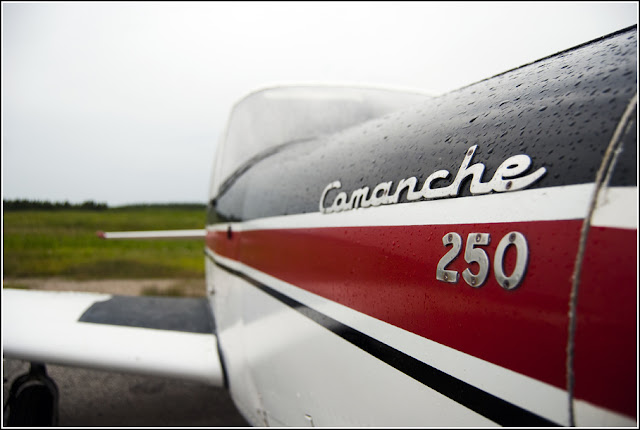 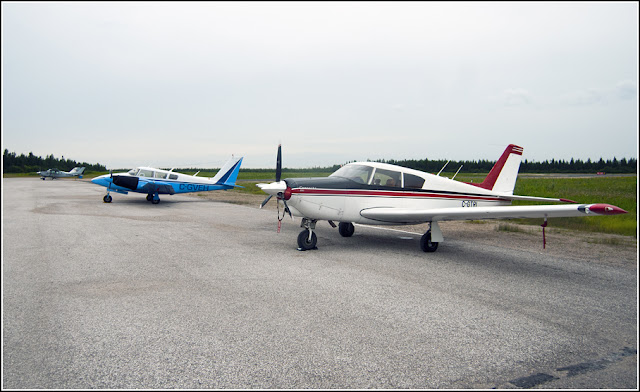 Around 6:00 PM the MNR helicopter arrived, bringing back the crew from another site up the coast, the Chickney Channel. 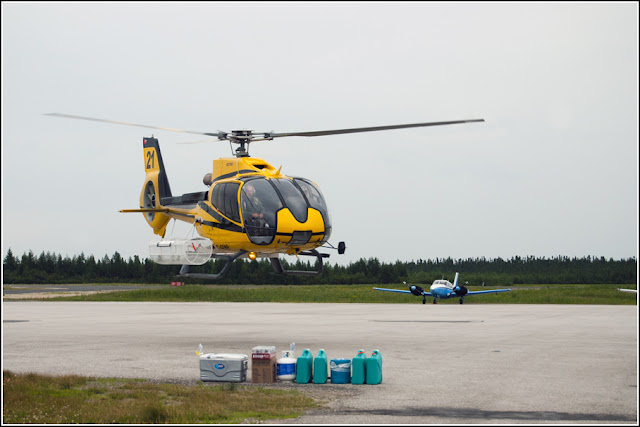 We loaded up the gear, and after a safety lesson from Doug the pilot, we were on our way! 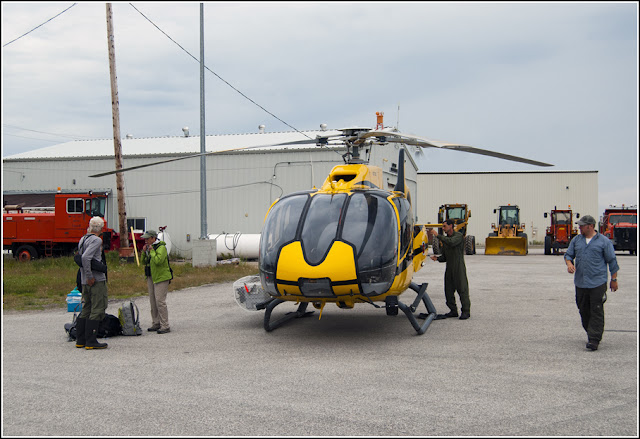 This was my first time being in a helicopter so I was offered the front seat next to the pilot. The windows were large and the view was fantastic as we flew low over the boreal forest and straight to the coast. 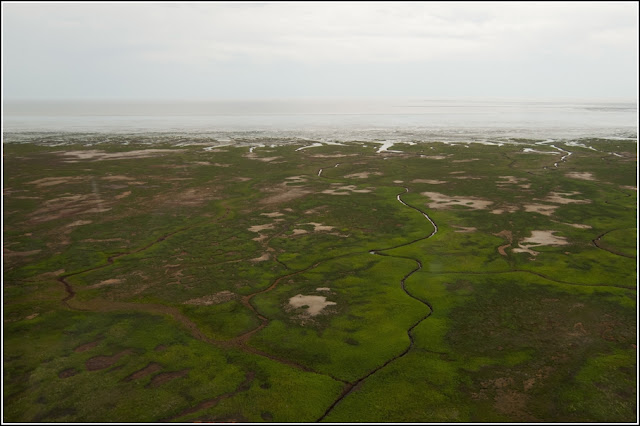 As we hit the coast and turned to the north, we passed over several First Nations hunt camps. Since this is the offseason we were able to rent the camps to do our fieldwork. Several of the camps were fairly rustic, but fortunately the ones we stayed at were mostly in good condition! Here is a view of one such camp from the air. The strip of dirt on the right hand side is a runway for aircraft. 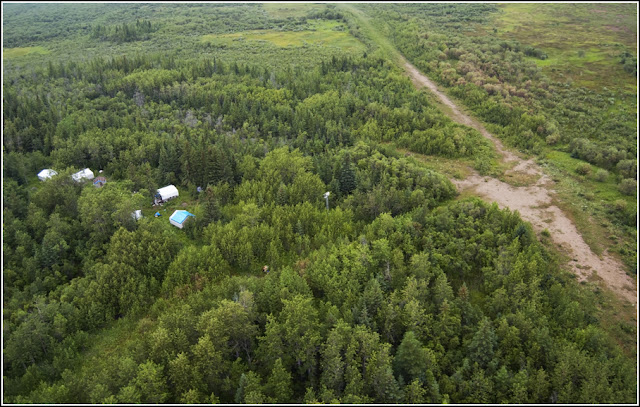 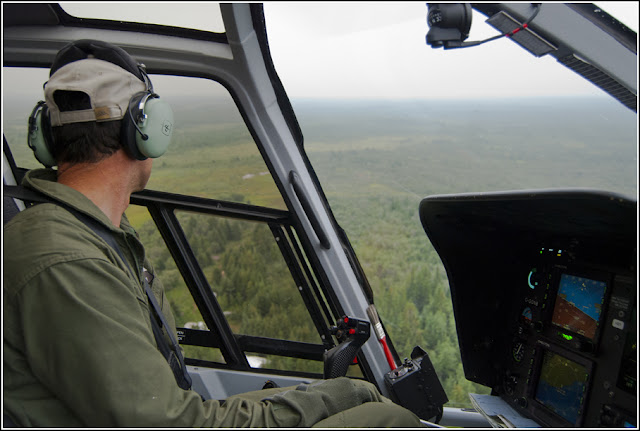 As we flew we saw some interesting wildlife. Flocks of unidentified shorebirds swirled below and a large group of Sandhill Crane took to the air as the chopper went over. We saw half a dozen bears including this individual. 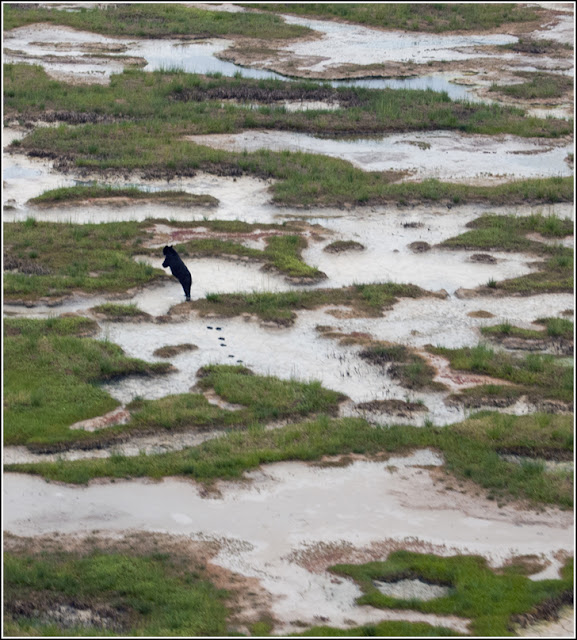 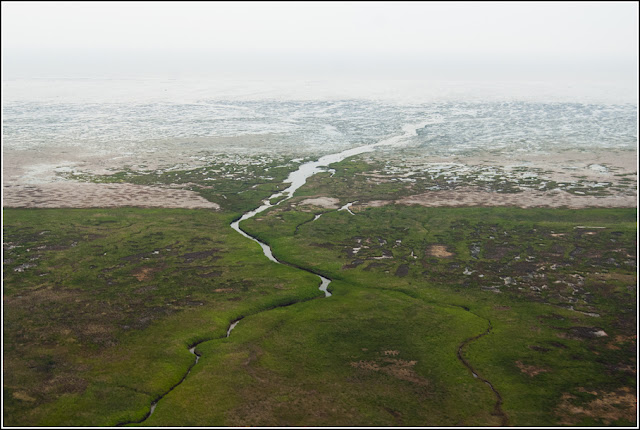 After dropping off some people at the more northern site (Longridge Point), Andrew Keaveney, Ian Studee and I jumped back in the chopper and were dropped off at Little Piskwamish, about 20 km to the south. The plan was for the three of us to spend three full days of surveying for Red Knots at that site before walking north with all of our gear back to Longridge Point, where we would spent the remaining 12 days or so.

The helicopter dropped off the 3 of us and we were all alone on the James Bay Coast - finally! The mosquitoes were quite friendly to say the least as we brought our gear in towards the cabin. I was happy to hear a few Nelson`s Sparrows ``singing`` away in the extensive sedge marshes. This was a year bird, number 322 for Ontario! Check out the recording below of a Nelson`s Sparrow singing. Pretty pathetic sounding!
Nelson`s Sparrow singing

We had a couple of nice surprises once we walked back into the woods where the cabins were located. First of all, the main cabin had a huge hole in the tarp roof and the plywood bed below was covered in some putrid looking black mold. Fortunately we had a tarp, so we stapled it on top to prevent any more moisture from coming in, and there were other platforms for us to throw our sleeping bags. Secondly, as we were putting together the propane stove we realized that we were missing the adapter that goes from the hose to the stove. Despite looking everywhere it was nowhere to be found, so we delegated ourselves to eating cold chili from a can, apples, and gatorade for dinner. On the bright side, the mosquitoes were practically absent around the camp and we found a brand new mattress, still in the plastic, in an additional cabin. Sure beat sleeping on the ground! 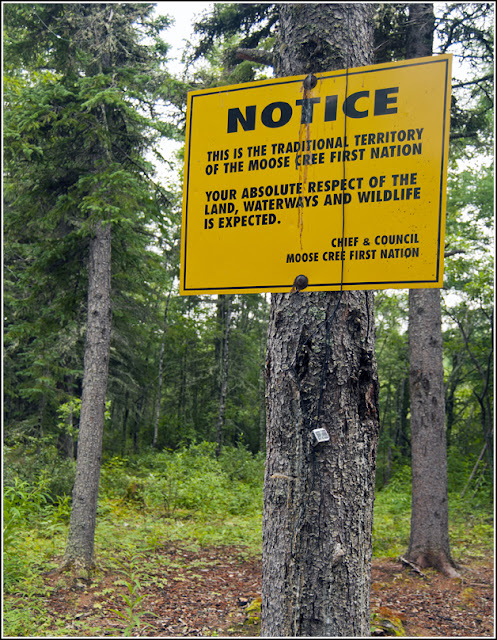 The next post will cover the duration of our time at Little Piskwamish as well as the hike up to Longridge Point.
Posted by Anonymous at 15:42