August 3, 2012
If you recall, at this point I had been at Little Piskwamish, the camp located furthest south, with Andrew Keaveney and Ian Sturdee for 3 days. The plan was for us to walk the 15 km to Little Piskwamish Point to spend the rest of the trip with Jean Iron, Barb Charlton, and Deborah Cramer.

August 3 broke calm and sunny with a light breeze from the south. Via satellite phone with Mark Peck the previous night, we had determined that the conditions would be perfect for the long walk. We woke up, cleaned up the camp, and prepared for the long walk, which we would soon discover was a lot longer than we were originally told! We each had a pack with all of our gear as well as our scope and the shotgun, adding to the difficulty. Unfortunately for Ian, he had a couple of up-close and personal experiences with the mud. 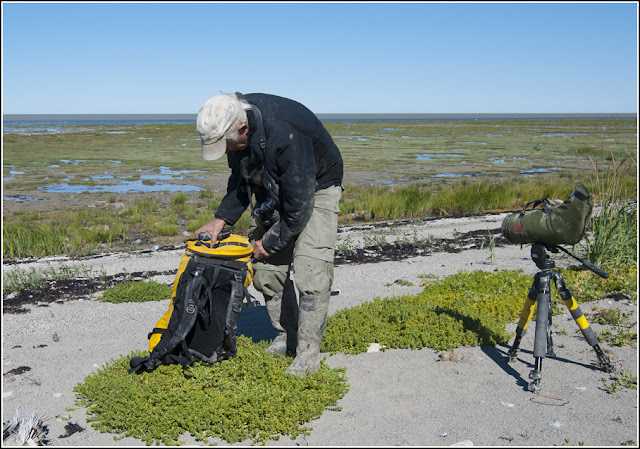 The day was cool, sunny with the winds at our back as we hiked. Fortunately the terrain was excellent and we followed a series of gravel ridges for most of the day, making for easy walking. Every 1 or 2 kilometres we would take a break, something that was entirely necessary because of how much extra weight in gear we were lugging along! At one point we reached an extensive marsh where last year's crew had found some Marsh Wrens the previous year. We didn't get any wrens but I was happy to see and photograph my first Mustard Whites. 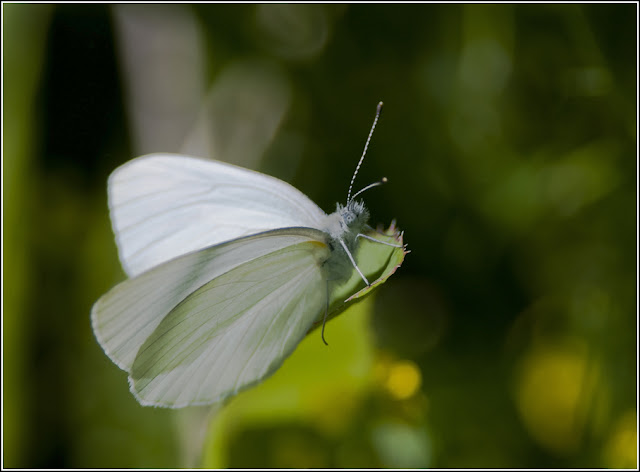 What was probably the bird of the entire trip ended up being one that got away. As we were walking we heard an unfamiliar shorebird call. The bird repeated the loud "curr-EEE" call several times as it flew over. I got on the large shorebird as it was heading away from us. It was up high but easy to see it was a tawny-brown in colour. Eventually we lost it as it disappeared far to the south. My first thought was Marbled Godwit as I couldn't recall what that species sounds like. Andrew played a bunch of calls on his phone and one of the calls matched perfectly! It was the call of Long-billed Curlew (which is also large and buffy/brown coloured). Unfortunately the bird was long gone...

Around mid afternoon we came across the old barge that I photographed earlier from the helicopter. Supposedly this was only a few km from the end! 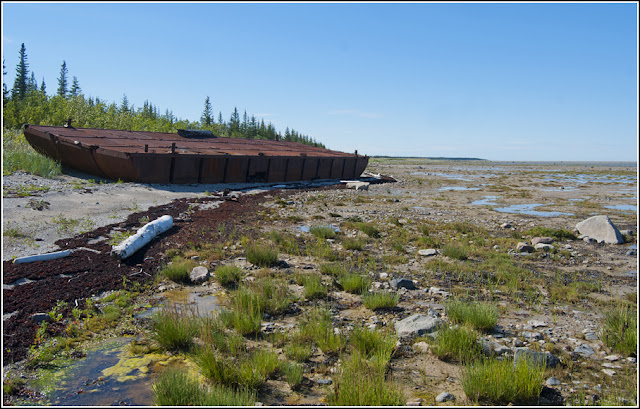 Self portrait - trying to convey how exhausted I felt...It turned out looking like I was confused, more than anything! 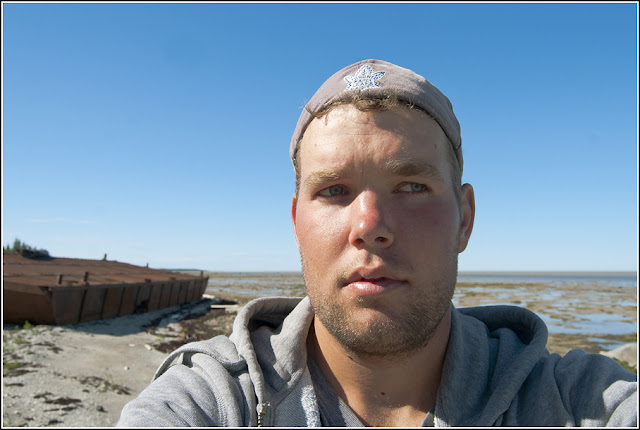 All along the walk I kept an eye and an ear open for Arctic Terns. This was really my only target species remaining for the trip! There were several Common Terns as well as some farther out that may have been Arctic Terns but it was really too tough to be sure.

After about 22 km of walking we finally reached the final bend and could see the camp out in the distance! Barb came out to meet us and we walked the last kilometre to camp, where the ladies had cooked us a huge feast of sausauge, cajun-style potatoes and onions, salad, pasta, beers, and chocolate for dessert. It sure beat what we were eating at the other camp - usually a can of beans/stew/chili or oatmeal. I have to say it was one of the hardest walks I have done!

August 4, 2012
We all slept in that morning then went out as a group to the end of Longridge Point which was about 6 km from camp. During high tide parts of the point are covered with waist deep water so one has to time the walk just right to make it to the end and back. In the photo below, the camp is near the bottom and the tip of Longridge Point is near the top right - not visible due to the fog. 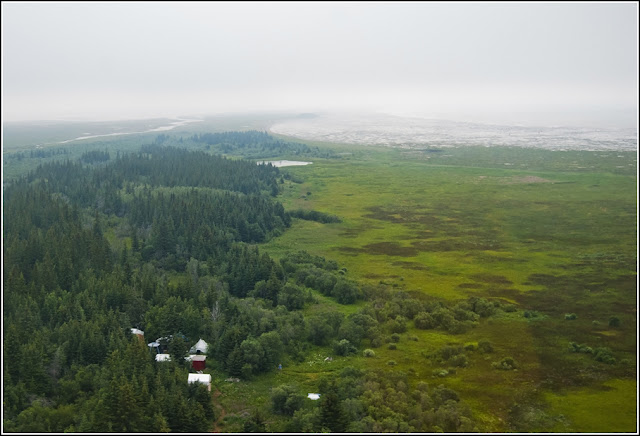 We did not see a whole lot of interesting birds that day, specifically, not a single Red Knot. Apparently they were all but absent from this sight so far! One possible reason could be due to a failed breeding season, with many of the adults departing early. Another reason is that the preferred food item for Red Knots in James Bay, a type of bivalve, may not be present due to shifting water currents bringing the larvae elsewhere.
Bird highlights for the day included a flock of 16 Red Crossbills which was previously thought to occur only very occasionally in southern James Bay. We ended up seeing them almost every day, along with hundreds of White-winged Crossbills. I was very happy to hear a Yellow Rail ticking away near camp, which was a new Ontario "self-found" bird.

August 5, 2012
Today I had plans to check out the west bay and points beyond with Barb and Deborah, about a 16 km round trip. I still wasn't fully recovered from the long walk a few days ago, but it sure was nice walking on a flat beach without being encumbered by a large pack! 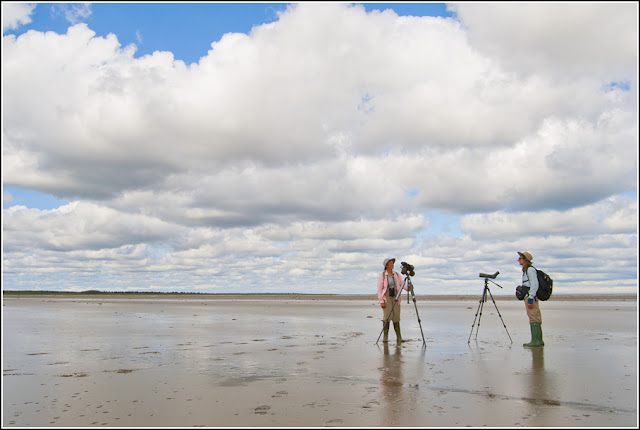 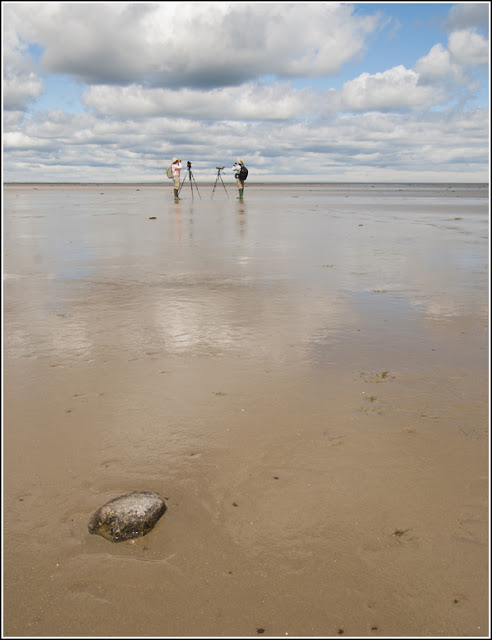 I had a bit of fun taking some landscape shots with the interesting sky and flat beach. 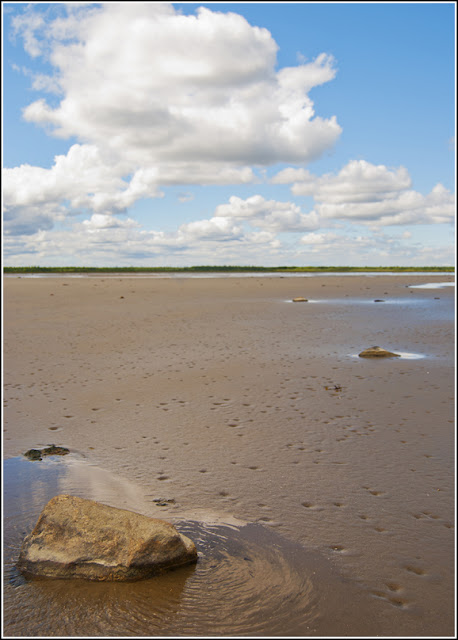 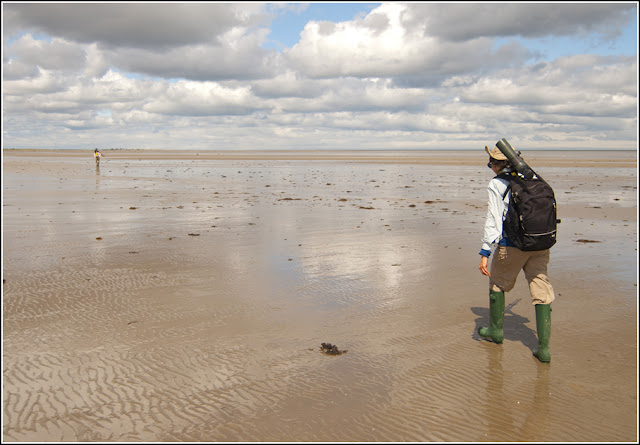 Eventually we made it out to the point just as the tide was starting to come in. We had some good birds, including a few Red Knots and a handful of Whimbrels flying by. Hudwits were common everywhere we went at this site... 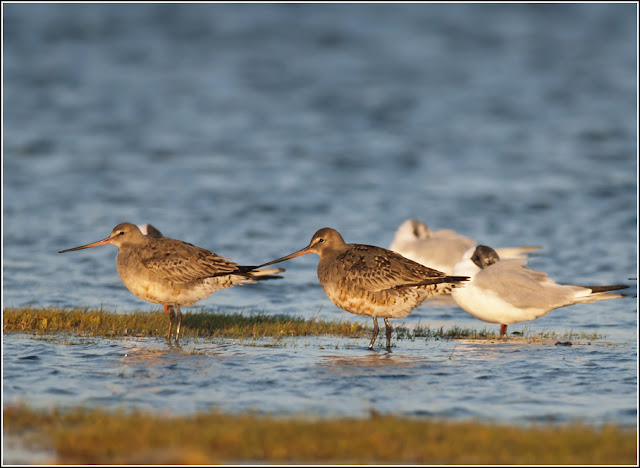 I was busy scanning for shorebirds and mostly, scanning for Arctic Terns when Barb calmly mentions from beside me, "I think I have a guillemot sitting on a rock". I think my response was along the lines of "Sure you do, Barb", since Black Guillemots aren't really found in this part of James Bay this time of year. She was serious though, so I took a look in her scope. Sure enough, sitting on a pile of rocks next to 4 cormorants, was a small black bird with a broad white wing patch sitting on the rock! It was very distant, but we could clearly see its upright posture and its diagnostic black and white breeding plumage. Wow! I had not expected this species at all! Black Guillemots are somewhat regular in late autumn and I had hoped to see it at Netitishi Point in the fall, so I had it categorized as a code 3. Even then, they are not guaranteed at Netitishi so this was a bonus bird, and year bird # 324. I took my scope and Barb's camera with a plan to walk all the way around the bay to the point when the birds were roosting, but I was called back after I had just started since it had disappeared once the tide had started to cover its rocks.

On the walk back to camp, we had a few more interesting birds including a flock of Red Knots where I was able to read one flag. We had our first Short-billed Dowitcher of the trip, a crisp looking juvenile. I'll add the photo once Barb emails it to me (it is on her camera since I didn't bring my bird lens with me that day).  I did grab this photo of a Yellow Warbler later that day which was a new photographed species for the year. 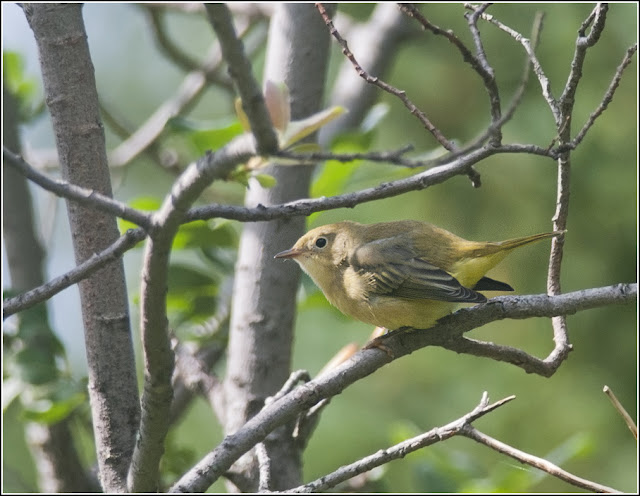 It was a great day with an unexpected year bird. I still didn't have an Arctic Tern, a fact that I was starting to get slightly worried about since James Bay would be my last chance for it. But on the bright side we still had another 10 days or so on the coast. Stay tuned for post four as I continue my quest for Arctic Terns!
Posted by Anonymous at 23:04

There's something very strange about that self-portrait. Can't quite figure it out!