July 31, 2012
I actually had a pretty good sleep the first night! Ian and I shared the mattress and became a couple for the time we were at Little Piskwamish (sorry Laura!). I was up at 6 or so that morning because I was anxious to get out and see the coast of James Bay from the ground for the first time.

I made my way through the swarms of mosquitoes that were present in the marshy area near camp and the sedge meadows further east and eventually made my way out to the coast. I couldn't help but notice the shear number of Nelson's Sparrows singing and I took some time to get a good look at them. A Le Conte's Sparrow was fairly close so I grabbed a few shots of it skulking around in the bushes.


The water was pretty much at the low tide mark and the mud flats stretched for miles! I noticed too that once you were on the mudflats the mosquitoes completely disappeared (except for the cloud that followed you out there). Eventually due to a combination of swatting them and the cool breeze, I was mosquito free.

I'll have to admit, it felt pretty awesome standing alone on the mudflats without seeing the presence of another human as flocks of White-rumped Sandpipers whirred by! Down the beach was a female Black Bear with her 2 cubs, foraging in the sedge meadow. Just as I was heading back to the camp, a single breeding plumaged Hudsonian Godwit flew by at close range, calling. Pretty spectacular to see, though maybe less so since I knew I would be seeing hundreds shortly!

Ian and Andrew had made a fire so we able to have some hot food, a nice change from the night before. It was here that I found my first Hudson Bay Toad - a brightly colored but poorly known taxa of the familiar American Toad from back home. Some consider it a full species (Anaxyrus copei), others a subspecies of American Toads (Anaxyrus americanus copei), and others just a unique color variation of American Toad that is found in the far north (Anaxyrus americanus). Whatever they are, they sure are beautiful with a boldly spotted ventrum, orange/red and black dorsum, and bright white dorsal line running all the way posteriorly down the body.


I should probably take the time to briefly introduce the other two guys I was with. Andrew Keaveney (a.k.a. "twitcher")  is a birder/ from Etobicoke. He has spent the last number of years chasing birds not only in Ontario but around the world. He is also doing a big year in Ontario this year and nipping at my heels!


Ian Sturdee (a.k.a. "the old guy") is also from the GTA though he splits his time between Toronto and his cottage in Peterborough. He spends a lot of time at the Leslie Street Spit in Toronto, helping out with bird surveys and the banding operation.


The three of us left to survey for Red Knots as the tide came in - I headed north, while Ian and Andrew headed south. There were two main goals of this project, a joint venture between the Ontario Ministry of Natural Resources (OMNR), Royal Ontario Museum (ROM) Canadian Wildlife Service (CWS), Natural Heritage Information Centre (NHIC), and the Moose Cree First Nation (MCFN). The first was to census the shorebirds that use this globally important stopover site, and the second was to identify certain individual Red Knots. It took me about an hour until I saw my first flock of Red Knots fly by, then soon enough I came across a big flock of them!


About 10% of the Endangered rufa subspecies of Red Knot have been banded and flagged - some in the US, some in Brazil, even Argentina and Chile. Each flag has a unique 2 or 3 digit code and these flags can be read from in the field. The trick was getting close enough to a flock to read the flag combinations, a task made difficult due to passing raptors, noisy yellowlegs, and unseen "dangers" causing the knots to flush very easily. Eventually I managed to get close to some flocks and managed to read about 15 flags over the coarse of the day.


I wasn't able to get close enough to get photos of jewelry wearing knots, though Jean Iron has some at her website: http://www.jeaniron.ca/2011/JamesBay2011/index.htm

We ended up spending 3 full days at Little Piskwamish and surveying for Red Knots and between the 3 of us we observed 50 unique flags. Of course, there were many other shorebirds present - thousands of White-rumped and Semipalmated Sandpipers, hundreds of Hudsonian Godwits, and lesser numbers of about 17 other species of shorebirds. Highlights for me on July 31 was a single Stilt Sandpiper. Other interesting birds we had that day were a flock of 34 Redheads, 11 American White Pelicans flying by, and a healthy dose of boreal birds including Boreal Chickadee, Yellow-bellied Flycatcher, Blue-headed Vireo, Blackpoll Warbler, and Lincoln's Sparrow. That evening a Common Nighthawk "peent"ed overhead.


August 1, 2012
I spent a few hours that morning trying to stalk some Nelson's Sparrows to get some photos. The job was made a little difficult because I was limited to my 300 mm lens and the mosquitoes were as friendly as ever. However, with a little patience I was able to get a few I was pleased with.


Day two at Little Piskwamish was pretty frustrating when it came to the Red Knots. I spent several hours as the tide came in unsuccessfully sneaking up to the birds while an ominous black cloud hung over the land to the west. Eventually the rains came, and though they were never heavy, they were steady and lasted for most of the afternoon. I neglected to bring my rain pants with me to Little Piskwamish but fortunately I had a rain cover for the pack I was wearing and I had my raincoat. The extra rain combined with the high tide made it very difficult to navigate the many creaks that meandered to the coast. Inevitably I soaked both boots and spent the rest of the day completed drenched from the waist down. I completely struck out on the knots though the other two guys managed to get some later in the afternoon.

It was hard to get too discouraged since we were on the James Bay coast, after all. A single Marbled Godwit was probably my favorite bird sighting, though we also heard a Yellow Rail ticking and Ian and I had an adult goshawk flying low out of the forest.

August 2, 2012
Day three was a little better than the previous! It didn't start out so well as I managed to burn a big hole in the only pair of field pants I brought with me to Little Pisk while drying them out. To add insult to injury, it happened right after I told Andrew that I wasn't going to burn them since he had just warned me! I quickly learned that quick dry pants don't have to actually be touching the fire to burn. I spent a bit of time that morning taking some photos around camp while I waited for the rest of my clothes to dry. 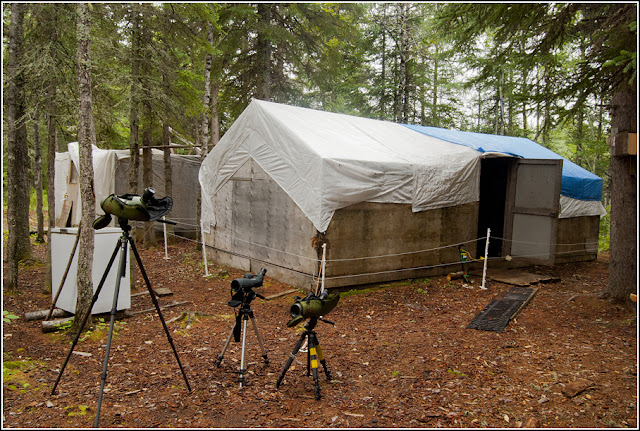 The above photo is the main cabin where the three of us stayed. There were a couple of run down cabins near by as well as a new cabin farther down which we didn't use. The building supplies are brought in by snowmobile during the winter. 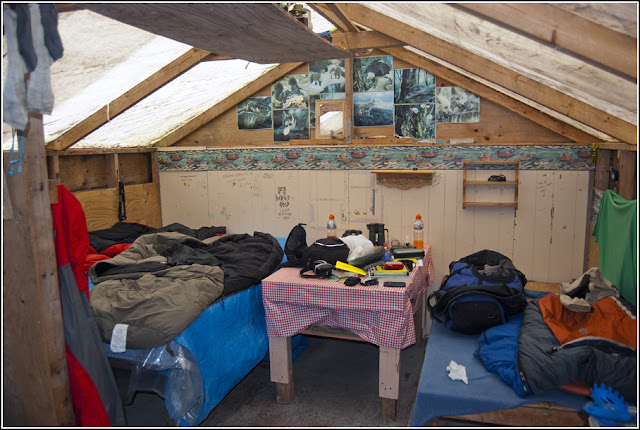 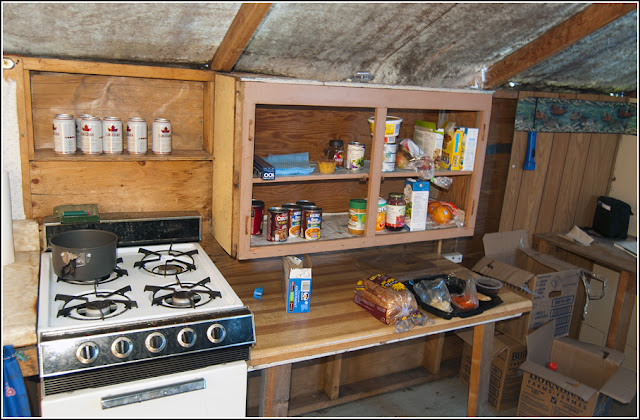 Above are two photos showing the inside of the main cabin. And no, the stove on the left doesn't use electricity! Below is a photo of Andrew and Ian by the fire. 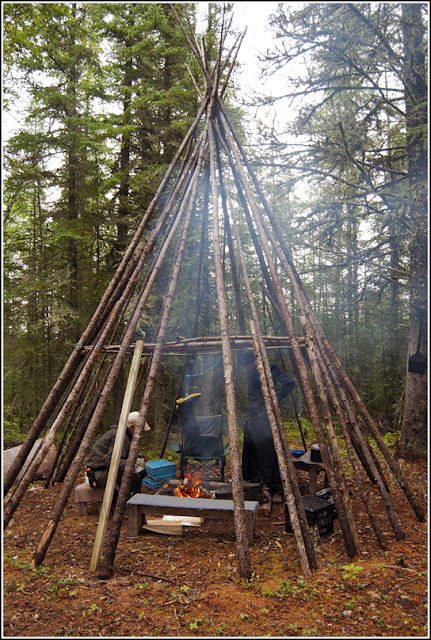 The weather was a little better today though with a brisk north wind as usual. I ended up going south while Andrew went north and Ian hung out in front of the camp. I ended up walking about 10 km without getting any Red Knot flags but right at the end of the day everything lined up perfectly. The wind had died down a bit, the sun was at our backs, and the birds tolerated our presence while they fed rapidly. I'm not sure how many flags we got in that last hour, but it was probably close to 30 unique flags.

We had a few more good birds on August 2nd. I had an adult male Red-necked Phalarope briefly land with the flock of knots before continuing southward, a Brant with a flock of Canada Geese 4 km south of camp, and Andrew had 2 Little Gulls. The highlight of the day though was the Bohemian Waxwing that we heard several times in the morning.


I'll end the post here since it is getting a little long-winded. The next installment will cover the hike to Longridge Point and the first few days there.
Posted by Anonymous at 22:56