This morning, Glenn and I led a bird walk on the grounds of Hotel Soroa, seeing many of the same species from the evening before including a nice little flock of warblers and some Red-legged Honeycreepers. After several days of only having brief flyovers, we finally locked on to a perched White-crowned Pigeon, allowing great views for everyone in the group.  We left the hotel and by 9:30 AM we had arrived at a lake in the foothills of the Reserva Sierra del Rosaria, where we met up with a local guide and went hiking along some of the trails.

By scanning the shorelines and marshy areas, we were able to eventually turn up Snail Kite, Purple Gallinule, Common Gallinule, Green Heron, Great Blue Heron, and the highlight , spotted by Glenn - a Limpkin! The Limpkin, essentially an overgrown rail, is found throughout tropical regions of the Americas, from Florida all the way to Argentina. For some reason I had never crossed paths with one, so I was quite happy with Glenn spotting the bird!


We enjoyed a great hike through woodlands and along quite roadsides, seeing a good number of the resident and overwintering birds while we were here. Olive-capped Warbler, Red-legged Honeycreeper, Yellow-headed Warbler and Cuban Tody all put on a great show for the Clients.

The sunny morning also kickstarted several butterfly species to take flight. I believe that this one is a Malachite.


As we neared the end of the hike, I paused to photograph a typical classic American car as it drove past. 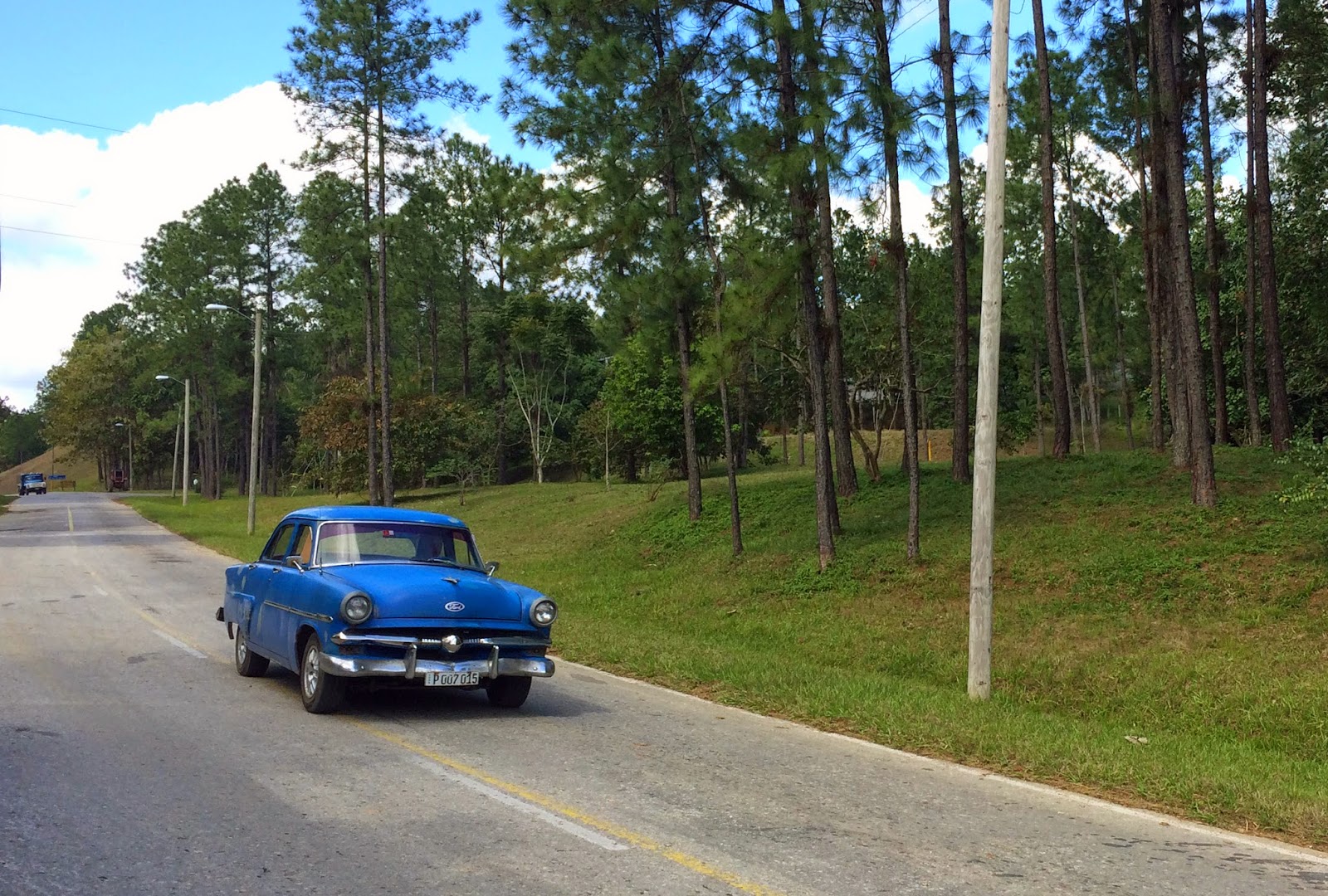 We arrived at our destination for lunch, the Cafetal Buenavista, which is located near the entrance to the restored ruins of Cuba's oldest coffee plantation. The birding happened to be quite good around the restaurant, and while we were milling about on the grounds I noticed Indigo Bunting, Rose-breasted Grosbeak (tough to get in most of Cuba), and my lifer La Sagra's Flycatcher, the first of what should be many later in the trip.The lunch was typical Cuban fare - a salad with shredded cabbage, tomato, and cucumber (with olive oil and white vinegar), dried crusty bread and butter, big plates of a mixture of rice and black beans to pass around, and our main meal which consisted of either chicken, pork, or beef, as well as with another side. This was followed up by desert which usually consisted of fresh fruit, or a small piece of cake with icecream. Most meals were some iteration of that! And of course, a local band serenaded us throughout the meal, hoping to persuade some of us to purchase a CD (which almost inevitably happened at every meal!).


A pair of Cuban Green Woodpecker had also taken up a nearby tree for a nesting cavity which we watched before and even during lunch as they landed in a nearby tree. Every 10 minutes or so, one individual would arrive at the nest cavity, wait for the other to depart, and then take hop inside for domestic duty. After lunch, I positioned myself where the lighting was the best and waited for the switchover. Unfortunately I never managed to get a decent photo of both birds, but this portrait turned out alright.

That afternoon, we visited the artisans and shops in the town of Las Terrazas, situated around a lake that provided us with views of some Cuban Sliders and an Osprey. We visited the home of the late musician Polo Montañez, walked the streets, and even came across a group of 9 American Flamingos along the edge of a small waterbody in town. Apparently these flamingos were released here at one point, and have stuck in the area. I guess I would have to wait for a few days for us to see "real" American Flamingos in Zapata.

That afternoon, being stopping back at the Hotel Soroa, we made a brief rendezvous to the base of a nearby waterfall. The heat from earlier in the day hadn't quite touched this area, and while the birdsong was quiet, a distant Cuban Solitaire and Cuban Trogon called occasionally.

Down near the base of the waterfall a Louisiana Waterthrush was chipping loudly. Several of us watched it scale the slippery rock wall beside the waterfall, eventually perching on a 60 degree slope at the very top of the waterfall. Pretty incredible how this species has adapted to life around flowing streams and waterfalls.

That evening, I went for a late dusk hike around the Hotel Soroa. I left around 5:30 and checked out a trail that meandered into the forest just down the road from the hotel.

I came across one dead end, but eventually found my way along a track that cut into the woods for about half a km and towards an open area overlooking a forested hillside. Right around dusk I was approaching the opening in the woods when I heard some twigs snapping. A look with the bins caused a pair of Ruddy Qual-Doves to materialize as they walked away from me in the thick undergrowth. There are four species of quail-doves native to Cuba, including the two endemic species (Blue-headed and Gray-fronted) a near-endemic (Key West) and Ruddy, found through the tropics in the Americas. Ruddy is the only one of these species that I had seen before, so I was really hoping for any of the other ones. Regardless, it was an awesome sighting nonetheless, as quail-doves are one of my favorite groups of birds and can be difficult to observe.

The first Cuban Pygmy-Owl of the trip called several times as well while I watched the sun set over the hills.  It turned into a pretty successful evening hike, a nice end to another great day in Cuba.

Posted by Josh Vandermeulen at 09:31