Our plan for the morning was to hike down the road for several kilometers to lower elevation forests. A small village here called Palo Alto sometimes hosts one or more Santa Marta Blossomcrowns, one of the two remaining endemic bird species we had yet to find.

My camera spent the night in a ziploc bag with some of Steve's silica packs, and by the morning I did not see any condensation visible through the viewfinder. I tried turning it on, and surprisingly it worked! I guess the silica packs really do work. My macro lens was also OK, but the flash appeared to be dead. It was turned on when the camera setup was submerged and appeared to be fried.

I decided to take my camera with me, though after an hour or so of hiking in the high humidity with the temperature increasing I noticed a significant amount of condensation in the viewfinder and the top display panel, so that shut down my photography for the day. I just did not want to risk anything. The plan would be to lay the camera out in the hot sun later that afternoon with hopes of removing any lingering condensation.

The birding was pretty decent on the walk down, though we had to work hard at times for new species. New trip birds appeared occasionally - Long-billed Hermit, Blue-headed Parrot, Bright-rumped Attila, Dusky-capped Flycatcher, Red-eyed Vireo. Common neotropical species that we had seen before, but interesting all the same.

After an hour or two, we heard a Rusty-breasted Antpitta calling down a slope, our third (of four) antpitta species that are found in the Sierra Nevada de Santa Marta. The fourth, Scaled, is a widespread Central American and Andean species that we would miss on the trip. The Rusty-breasted would tease us occasionally with a song, then refuse to show itself in typical antpitta fashion!

A small flock of Blue-capped Tanagers appeared in a little mixed flock, our second and final life bird for the day. We walked the several kilometers down the to Palo Alto and searched for Blossomcrowns at the recommended garden, but struck out. This bird was starting to get annoying...Our other target, the Santa Marta Antbird was also a no-show on the day. Their preferred habitat, forest edges and second growth at low to middle elevations, was a little too far down the mountain past where we had hiked to. Our plan would be to try to find it one our drive out the following morning.

The sun was rising in the sky and bird activity was slipping, so we decided on retracing our steps up the road towards El Dorado for the afternoon. I was anxious to continue drying my camera in the sun and with few bird targets where we were situated we could relax around the lodge for the rest of the afternoon and evening.

We encountered a group of 5 Black-fronted Wood-Quails along the road, improving on our views of this scarce species which we had briefly observed two days earlier. And as we arrived back at the lodge, one of the guys located this awesome little Anadia species. It is hard to find photos online of the various Anadia lizards, but I believe this one is A. pulchella, endemic to the Santa Marta mountains.


That afternoon we mostly relaxed around the lodge as the previous few days had involved a lot of walking. The Sierra Nevada Brushfinch made another appearance at the compost pile, our first excellent looks at one. Of course more fun was had with our friend Juan as well...

The following morning Pedro picked us up to drive us back down to Minca. We tried again for Santa Marta Blossomcrown, this time at a new location that had hosted birds in the past. Extensive gardens in the backyard provide excellent habitat for tanagers, hummingbirds, warblers, flowerpiercers, thrushes and more.

While walking around the grounds behind the house our luck finally came through in the form of a Blossomcrown! It did not stay long, but I think the other guys managed ok photos. We also encountered our first male Coppery Emerald here, a sharp looking little hummer, as well as our first Black-headed Tanagers, Rusty Flowerpiercers, and a One-colored Becard. It was nice to finally see a few lifers in a row, considering we had only two in the previous day.

With our main target acquired we continued our drive down the mountain towards Minca, stopping several times in appropriate looking habitat for the Santa Marta Antbird. Eventually the forest gave way to more fincas interspersed with forests and other cleared areas, providing what looked like suitable antbird habitat. We were in luck once again and came across at least two birds, near the village of Cincinati. Their skulked in the undergrowth and remaining hidden at first, but eventually popped out and allowed the guys with functioning camera to take a few record shots.

With all of our main targets now in the bag, we completed the drive to Minca where a few cold beers on the terrace of the hotel/restaurant were in order!

Interestingly enough, the typical lager of much of Colombia, known as Aguila, uses a picture of a Bald Eagle on their label. Bald Eagles are not found in Colombia, and there is a vast array of amazing eagle species native to Colombia that they could have picked instead - Harpy Eagle, Black-and-Chestnut Eagle, Ornate Hawk-Eagle, Solitary Eagle, etc. 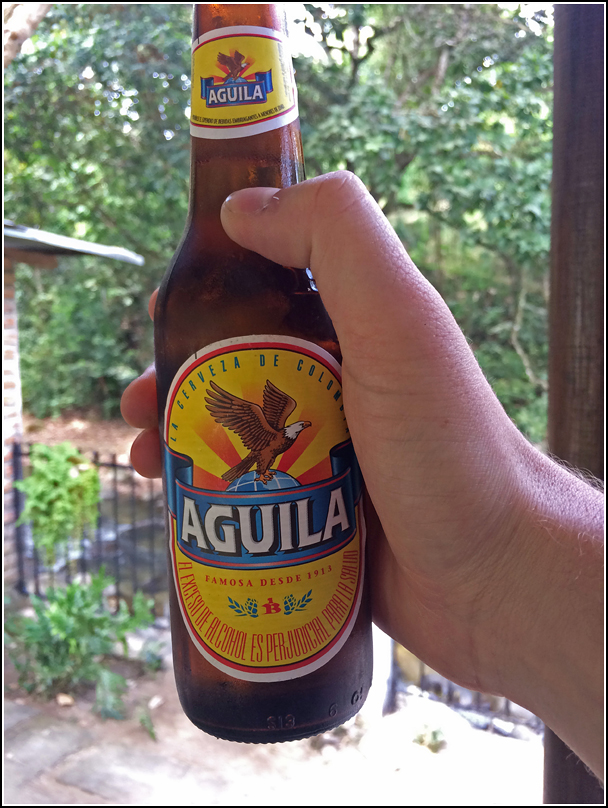 After another hour of drying in the sun while we were having lunch, my camera's rise from the dead was complete. I was a little nervous turning it on and taking the first few photos but everything seemed to be working just perfectly! I lucked out this time.

Following a quick photography session with the same common hummingbird species at the feeders we decided to go for an afternoon walk in the dry forest and scrubby areas around the periphery of the town. While we had observed all the possible endemic bird species, there were a handful of lower elevation, dry forest specialties to look for. While the timing of our hike wasn't the best, we encountered a surprising number of birds including a few new ones for the trip - Blue Ground-Dove, Pale-eyed Pygmy-Tyrant, Masked Tityra, Cinnamon Becard, etc. White-bearded Manakin and Swallow Tanager were lifers; I was surprised that it had taken us this long to find our first Swallow Tanagers since they are supposedly common in the area.

We stayed in Minca for the night which gave us one more shot at Black-backed Antshrike and Military Macaw in the morning, two specialties of the area. From there we would be meeting up with our driver who would take us east along the coast to the Guajira desert with its suite of new bird species.
Posted by Josh Vandermeulen at 07:26