In the predawn darkness, our driver pulled up to the hotel and we were soon on our way to El Sanctuario de Fauna y Flora Los Flamencos. Our plan was to meet up with Jose Luis, a native Wayuu who knows the birds of the Guajira Peninsula better than anyone.

There are a number of bird species endemic to the Guajira area of northern Colombia as well as northwestern Venezuela. As Venezuela is not an easy place to travel in right now, and the situation in Colombia is very stable, this means that Colombia is the place to go at the moment to see them. Some of the species are:

We had already seen Chestnut Piculet, Black-backed Antshrike, Russet-throated Puffbird, Orinocan Saltator and Chestnut-winged Chachalaca, leaving around a dozen target species to search for during the morning.

After meeting Jose in his community of Los Camarones, we headed out on foot through the trails in the area. The dawn chorus was quite something here in the desert and we quickly began to work away at our target list.

Quite a few Slender-billed Tyrannulets and Pearly-vented Tody-Tyrants added their voices to the dawn chorus. A few Orinocan Saltators were quickly found, also singing away as dawn broke. Occasional pigeons flying over were soon seen well enough to identify as our target Bare-eyed Pigeon.

A Buffy Hummingbird was performing display flights and vocalizing frequently; perhaps a female was watching from somewhere unseen to us.

The striking Vermilion Cardinal soon made an appearance - Jose quickly picked up on its song and got us on a bright red male, singing from the top of a distant, thorny tree. We ended up seeing at least four of these iconic beauties, though unfortunately I was never able to get anything better than distant record shots. With its bright colour and tall crest, it is easy to see why this bird is known as El Rey de La Guajira (the king of the Guajira).

Bird activity was fantastic around a few of the ponds dug into the sand and clay, which the people of Los Camarones use as a water source. Green-rumped Parrotlets, Black-faced Grassquits, Glaucous Tanagers, Pileated Finches and White-fringed Antwrens were all easily seen here, among many other species.


A different suite of species could be found skulking in the nearby thorny thickets. Pale-breasted and (our target) White-whiskered Spinetails were found, as was our first Pale-tipped Tyrannulet and a surprise Yellow Tyrannulet. Meanwhile, various herons and other wading birds were occasionally seen flying to their feeding grounds, while Magnificent Frigatebirds slowly cruised over.


It only took an hour or two of sunlight until the day was quite warm. With a few other spots to explore for our few remaining target species, we left the birdlife of this area.

Our next trail provided some good studies of tyrannulets, while both Scrub Greenlet and Shining-green Hummingbird were seen briefly but well. Eventually, the distinctive call of a Trinidad Euphonia led to great views of one, singing away from within a small tree. The heat haze of the morning made photography a little difficult but I was happy to come away with some record shots.

Ferruginous Pygmy-Owls are a widespread species throughout Central and South America. We had heard a couple in the Santa Marta mountains, but it was here that we had our first good looks at one, after following the call of an individual from nearby scrub. Ferruginous Pygmy-Owls are diurnal, hunting small birds and other vertebrates by day. They can be quite active hunters, and the owl eventually continued on its way, diving into a thicket to chase something.


Our only remaining target bird at this point was one of the hardest species - the Tocuyo Sparrow. Fortunately for us, Jose had a couple of good leads on where they can be found. We struck out at his first spot, and continued on to the second. Here we finally lucked out, having good views of one skulking around on the ground, deep within a thicket. Success! My photos show not much more than a blur, but at least it is identifiable!

Our last stop was the road off the main highway in the Casa Blanca area, which we had visited yesterday on our drive towards the desert. It was now well over 30 degrees Celcius, putting a damper on the bird song. At least there was a bit of a breeze so one could somewhat cool off in the shade. 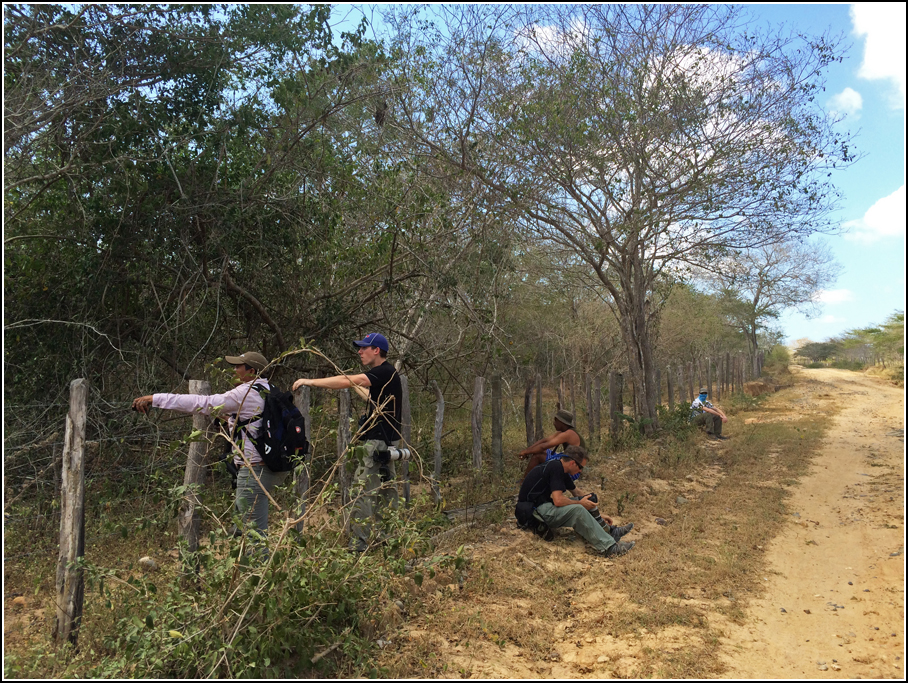 Here we had good looks at a Pale-tipped Tyrannulet and found another Ferruginous Pygmy Owl. We had no luck with Rufous-vented Chachalaca, a species which can often be found here roosting in some of the thickets. One last new species was a White-tailed Nightjar which some of us flushed.

While slowly driving up this road, we encountered a Rufous-tailed Jacamar, perching in some roadside trees.It was quite approachable for photos!

We said our goodbyes to Jose, after having seen every one of our main targets, only missing Rufous-vented Chachalaca, one of our secondary targets. Jose was able to help us find 70 species, including so many range-restricted species, in only a half day of birding. I would highly recommend him if anybody reading this is planning on going to northern Colombia in the near future.

We continued back to the west, driving parallel to the coast, leaving the desert behind with our destination being the forests and beaches of Parque Nacional Natural Tayrona. Our plan was to drive through the heat of the day, arrive by late afternoon, and spend the evening and following morning birding the park. In the afternoon we had a flight booked to Bogota high up in the Andes, where we would meet up with David Bell and Adam Timpf and begin the next leg of our trip, a 10 day tour of the Andes.
Posted by Josh Vandermeulen at 08:00

Josh, I think this is your best Colombia post so far! The scenery shots are always nice to see. Looks like Steve is really bored (or burned out) in one of those photos!

Thanks Alan! I think he is "chimping" his photos in that photo...

Excellent. I was skeptical to make the effort to get out in this region, but will definitely try the next time around. Again, I amaze at how easy everything is for you guys who travel without kids! I am always rushing to go out and bird, and get back to basecamp in time to do family stuff. Your trip is amazing. Thanks for sharing.

Thanks. Yes, the Guajira is certainly a place you don't want to miss - the birding there can be excellent (even if everything shuts down due to the heat a few hours after sunrise).