Parque Nacional Natural Tayrona is located approximately 34 kilometers west of the city of Magdalena, on the north Caribbean coast of Colombia. Its picturesque sandy beaches and dry forests are popular with Colombians as well as with backpackers. The park consists of 460,000 hectares of primary and secondary forest, and is the last stronghold for the endangered Cotton-top Tamarin. The endemic, critically endangered Blue-billed Curassow still survives in these forests as well, though it is much more difficult to encounter this species here than in the place where most birders see their first, at El Paujil Bird Reserve in the Magdalena Valley. Steve, Daniel, and Dan, my three amigos for this leg of the trip, had already seen Blue-billed Curassow here earlier on their trip before I joined up with them - an excellent sighting indeed!

There are not many species at PNN Tayrona that would be new for me, as many of the specialties of the area are also found in neighbouring eastern Panama which I visited with David Bell and Steve Pike in March, 2014. Nonetheless, it was a beautiful park with a nice diversity of birds, reptiles and other organisms, and a place we were happy to explore.

Arriving in the late afternoon, we paid our entrance fee and headed over to where we were planning on staying for the night, in some cabins right next to the beach. It turns out that the guy who ran this enterprise also had a keen interest in the flora and fauna of the area, particularly the snakes. When we arrived he actually had a young Fer-de-Lance in a bucket which we were eager to photograph. He had found this individual around the cabins and had carefully maneuvered it into the bucket, and instead of killing it like many would have done, he was planning on releasing it in the nearby woodland. It was great to see someone like this with a great respect for snakes, a group of animals which is often maligned throughout the world.

We were shown our rooms - basic, but certainly adequate and with a killer view - before having the rest of the evening to explore the nearby coast. 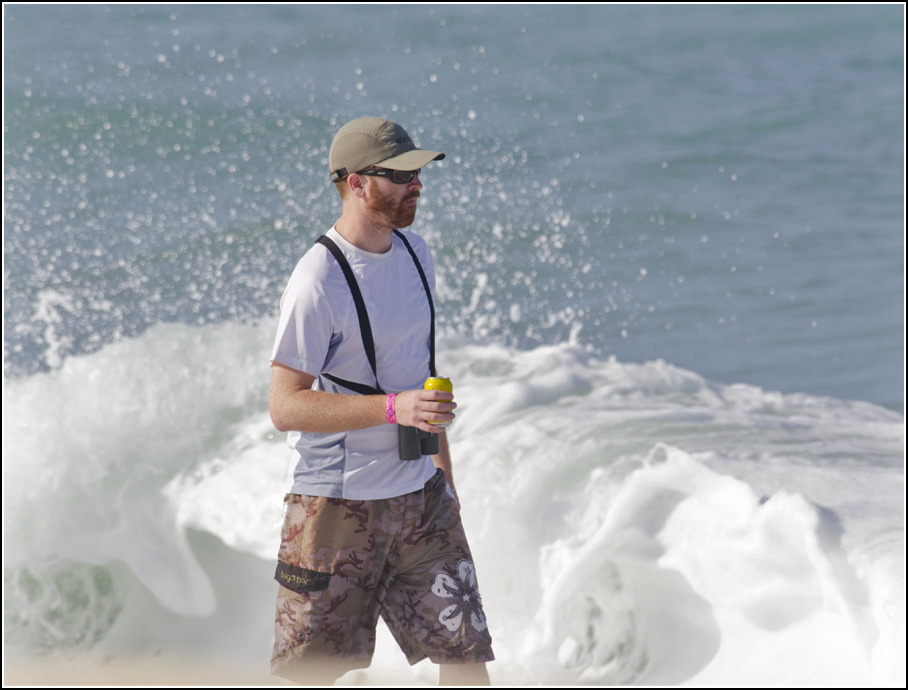 The Cotton-top Tamarin is a distinctive, diminutive monkey endemic to northern Colombia. While once fairly widespread throughout the area, habitat loss has contributed to an approximately 80% decline in population in the last three generations (18 years), as they now number around 6000 total individuals. The population within Tayrona was introduced in 1974, and it remains one of the few protected areas where Cotton-top Tamarins stiil exist.

We were quite excited to encounter a small group of the charismatic mammals that evening, jumping from tree to tree as they slowly moved through the forest along the edge of the clearing near the cabins. You've got to love the hairdos on these guys and gals!

A Crested Caracara was on the lawn, presumably searching for something to eat among the fallen coconuts from the nearby palms.


That evening we set out on a night-hike after dinner, exploring some of the trails through the mangroves and into the dry forest. Due to the lack of moisture it was difficult to find many herps, and despite a concerted effort we were unable to turn up any snakes. Scorpions, however were present in large numbers.While very difficult to see as they hid in the leaf litter, Dan Wylie had brought a black light with him. Shining the light over the forest floor, the fluorescing scorpions could be easily found as their cover had now been blown. 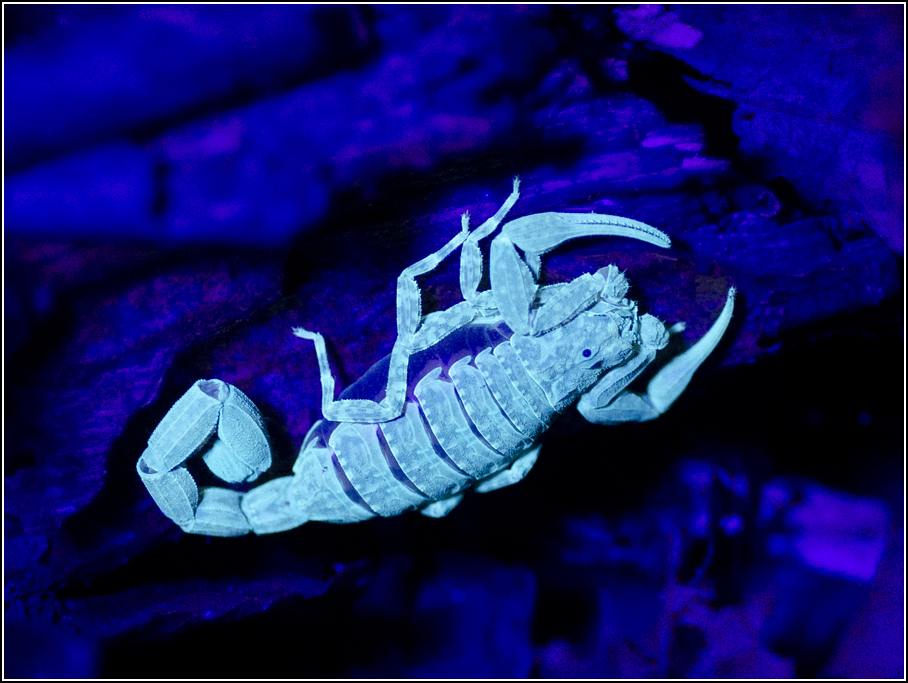 Using only the black light for illumination, I experimented with various camera settings until I was able to obtain a sharp result, showing the scorpion fluorescing under the UV light. It is still being worked out by scientists why the exoskeletons of scorpions have this amazing ability to fluoresce under UV light. While the reason why scorpions fluoresce is not fully known, the science behind how it happens is known. The exoskeleton contains several compounds, including beta-carboline, which glow under UV light. Young scorpions who do not have a hardened exoskeleton do not exhibit this feature, and scorpions recently having undergone ecdysis (shedding of their skin) also do not fluoresce. The image below is of the same scorpion as above, however this time I used the flash of my camera. 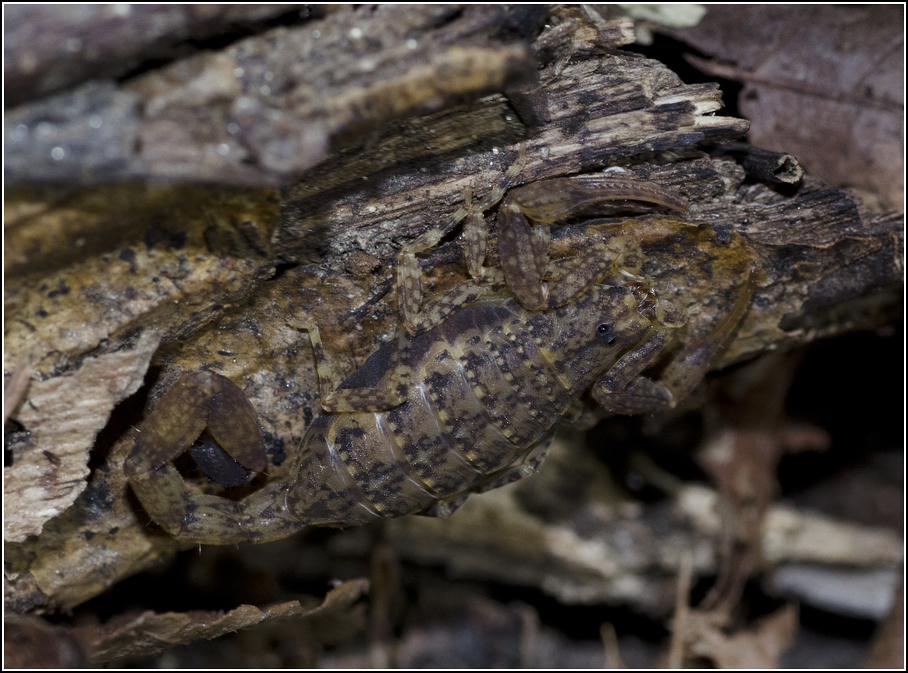 Below are two more examples, one with the black light and the second image with a camera flash, of a different species of scorpion. It really was amazing how many scorpions could be found in certain parts of the forest where there was an abundance of leaf litter. 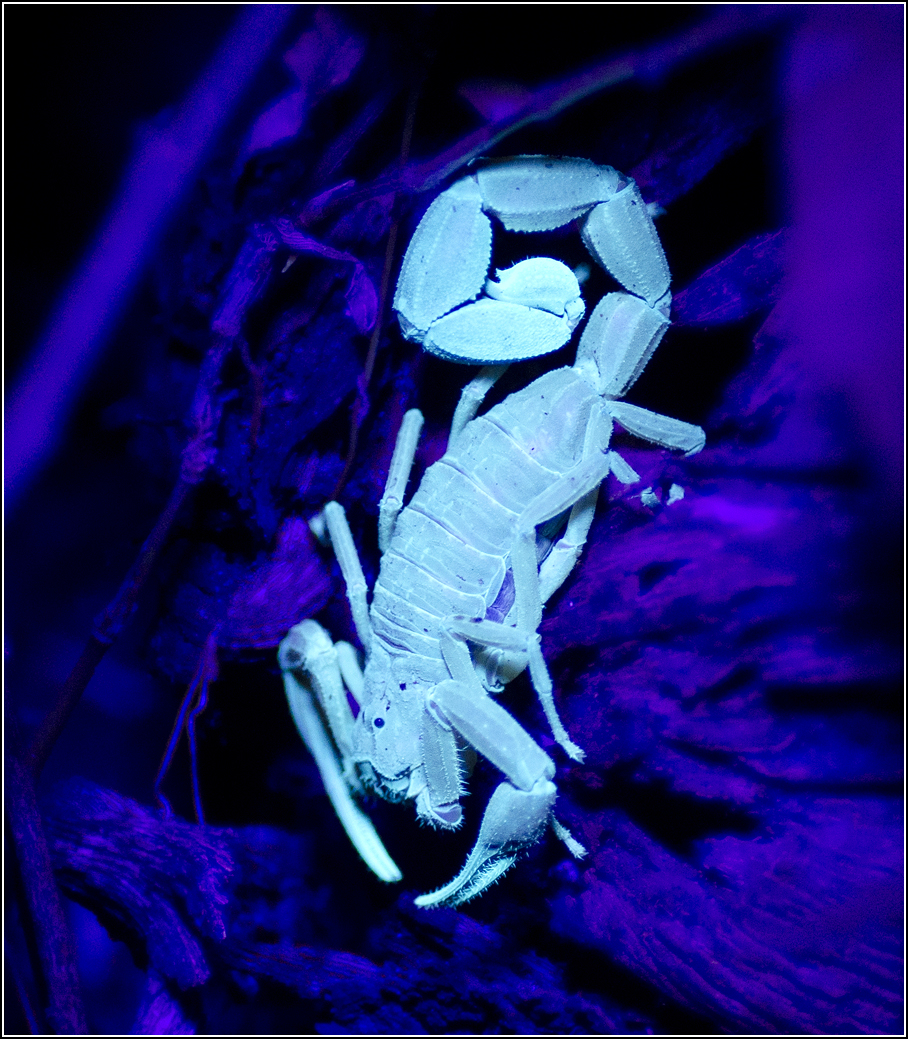 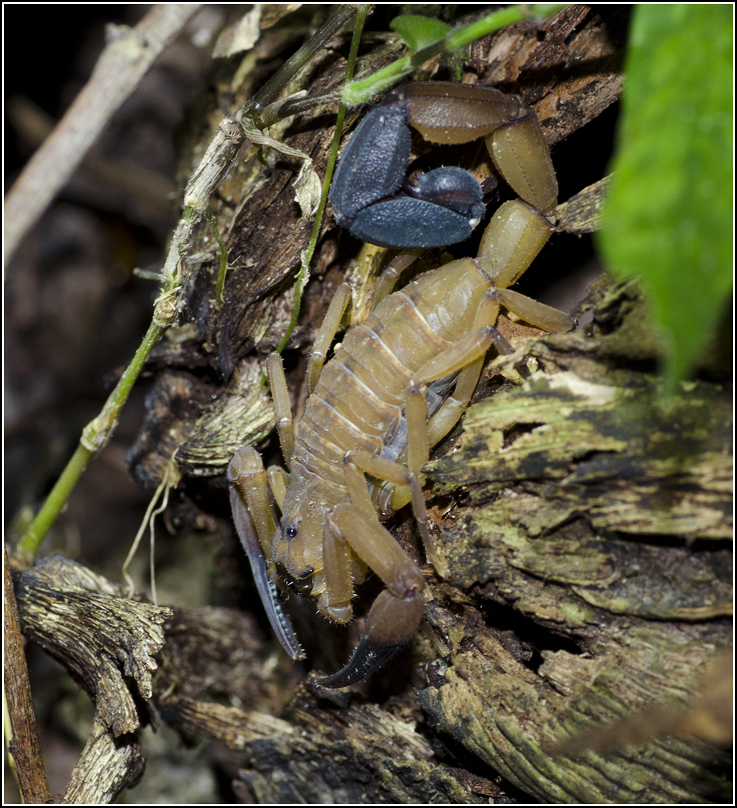 We found a few lizards on our hike, including this Yellow-headed Gecko resting on a trailside boulder. This attractive lizard is a widespread species in Central and South America.

We were also successful in spotlighting a roosting White-bellied Antbird in a thicket - not how one usually encounters this species.

We arrived back at our cabins by 10:00 PM or so - fairly early, but with the sun setting around 6:00 PM we still had enjoyed a solid 3-4 hours of night-hiking, and we needed to get some rest for another early morning of birding.

The birdsong in Tayrona was a little more familiar to me as several of the species I had encountered previously in Panama, and we were now a week into the trip and had become accustomed to the common species of this part of South America.

We walked down the road shortly after dawn, quickly finding some of the specialty birds of the area including Buff-breasted Wren and Lance-tailed Manakin. White-bellied Antbirds were singing, though remaining out of sight. Good thing we had found the roosting individual the night before!

I added but one lifer on the morning, a White-chinned Sapphire. As expected, we had no luck finding any Blue-billed Curassows on the road, though the early morning traffic of motorcycles, trucks, and convoys of horses likely played a role in preventing the curassows from coming close to the road. While the birding was a little slow, it was great to be exploring the mature forest of this beautiful park.

By mid-morning we headed back to the cabins to pack up and slowly prepare to depart for the airport. I explored the beach one last time. 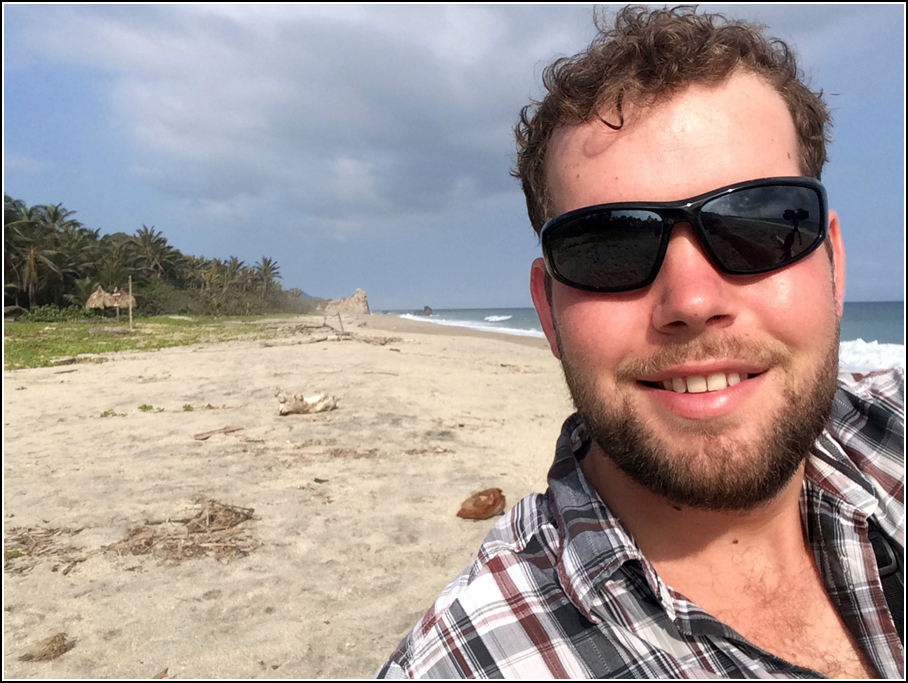 While I was at the beach, Steve was busy getting his hands on one of the brightly colored, and aptly named, Rainbow Whiptails which frequented the open areas. He handed it off to me to photograph - what an awesome lizard!


Our driver soon arrived and we bid Tayrona goodbye. We were dropped off at the airport and from there made the short flight to the capital, Bogota, where we were planning on meeting up with David Bell and Adam Timpf to explore the Andes on a 10 day tour.

All things considered, we had cleaned up in the north of Colombia, seeing every single one of our main target species. We found all of the possible endemics found in the Sierra Nevada de Santa Marta, the Guajira specialties, Chestnut-winged Chachalaca and Sapphire-bellied Hummingbird in the mangroves, and a wide variety of other species, totalling 292 species of birds in our first eight days. I missed Blue-billed Currasow, and El Paujil Bird Reserve wasn't on our itinerary, but it is a place that I will visit eventually. Our only other miss was Groove-billed Toucanet, though the vast majority of its range falls within Venezuela's borders.

Up next - the Andes!
Posted by Josh Vandermeulen at 16:09

Another fabulous day in the tropics! Very interesting, Josh, and I particularly liked the scorpion photos.

Thanks, Allen! The scorpions were definitely a highlight - it was incredible how many were on the forest floor when we shone the black light. It really makes you think twice about indiscriminately lying down to photograph something with the macro lens...