Journey to the Southern Cone: Part 6 (Nothofagus forests near Talca)

Today was a bit of a write-off as far as birding was concerned. We slept in a bit and enjoyed the comfort of the hostel we had stayed at, then walked over to the bus station to find transportation south to Talca. By the time we had arrived in Talca it was already late in the afternoon and so we found a place to stay and nixed any chances of going birding that day.

Chile happens to be a relatively expensive country to travel through. I think this room cost us around 70 Canadian dollars. What luxury....Similar accommodations in Panama or Colombia would cost about a quarter of the price! 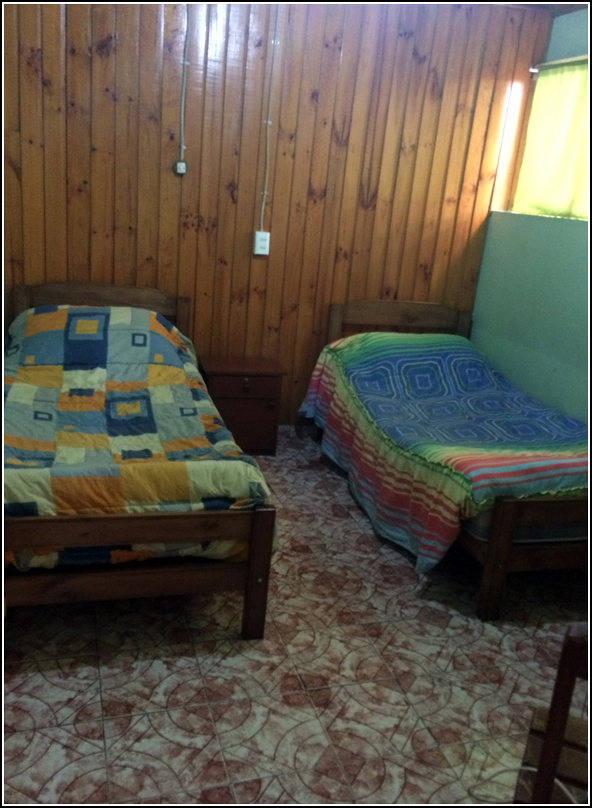 We managed to find some not-horrible pizza for dinner then called it a night. The following day we planned on birding the Nothofagus forests about an hour outside of town.

Nothofagus is a genus of trees known as the southern beeches that are found in southern South America and Australasia. A particular nice tract of these beautiful trees can be found in Reserva Nacional Altos de Lircay. Some of the interesting bird species found in these forests include Magellanic Woodpecker, Patagonian Tyrant, Patagonia Forest Earthcreeper, Chucao Tapaculo and Chestnut-throated Huet-Huet, yet another unique tapaculo species with a small global range.

We took the earliest bus we could out of Talca, though we did not arrive at the reserve until almost 9:00 AM. We paid our fees and checked in at the front gate, then continued hiking through the forest, dominated by the ancient beech trees.


White-crested Elaenias, Thorn-tailed Rayaditos and White-throated Treerunners were by far the three most common species of birds found throughout these forests. But occasionally we encountered other birds, such as a single Patagonian Tyrant and a pair of Patagonian Sierra-Finches. Green-backed Firecrown is the default hummingbird in this part of Chile.


Chestnut-throat Huet-Huet turned out to be a fairly common species and we heard at least 11 different individuals. We did not have much luck initially in laying eyes on this skulky species, however. We also heard a few Chucao Tapaculos; they too remained out of sight.

While passing a small stream we heard the distinctive song of a Magellanic Tapaculo. If this species gets split, this will be an "armchair tick" for us, since the individuals in the high Andes which we observed in the Farellones may be considered a different species. While having very similar songs, the individuals in the high Andes occupy different habitat, are a little larger and darker, and lack the white crown.


Birds were not the only organisms we were interested in, and I had a lot of fun chasing down and attempting to photograph the various lizard species. This one is Liolaemus tenuis, an endemic species to Chile.

Quite a few butterflies also vied for our attention. Unfortunately most of the colourful ones I neglected to photograph - this is the only butterfly that was captured by my lens during our hike.


We had heard that Magellanic Woodpeckers often respond to a double-tap sound created by tapping two rocks onto a hollow trunk in quick succession, which imitates an interaction call that the woodpeckers make. It certainly didn't work for us, but Dave had fun trying.


One of the trails opens up to a little observation platform that provides a panoramic view of the park. We made sure to carefully scan for perched raptors, as there had been recent sightings of Rufous-tailed Hawk in the reserve. Rufous-tailed Hawk is a little known and extremely difficult to encounter species that is found in southern Chile and Argentina. I think it is one of the most over-reported species - nearly every birder that travels to Chile somehow manages to add it to their life list, yet almost no one manages photos! I am only a little skeptical ;)

Needless to say we did not find any Rufous-tailed Hawks here or anywhere also along our travels. Likely fewer than 1,000 individuals of this species remain in the wild.


The overlook was a great spot to just hang out and eventually the birds did come to us. A big highlight here was watching a pair of Austral Parakeets fly past on several occasions. We also enjoyed what was a typical lunch for us - tuna on crackers.

We returned to the forest to continue our Huet-Huet search. Finally after tracking down a calling individual we were treated to very brief views as it ran across the trail. Not a chance for photos, however.

Several more lizards were easily seen in the forest - I've tentatively identified the first two as Liolaemus schroederi, but as usual, the caveat applies that I'm not positive. With the incredible diversity of Liolaemus lizards, many of which are coloured with muted browns and grays, identifications are not always easy.

This one is Pristidactylus torquatus, an iguanid that is frequently found in Nothofagus beech forests. Like most lizards found in Chile, this one is also endemic to the country.


Eventually we made our way back out of the reserve since it was now almost noon and we had some other places we wanted to check out before the day was over. Unfortunately we still had not encountered a Magellanic Woodpecker! We were in luck on our walk out - I thought I heard one call and stopped the guys. We waited and tried some playback. Two black shadows swooped in, landing on distant trees - they were Magellanic Woodpeckers!


This species of woodpecker is in the Campephilus genus, which includes about a dozen species found in South and Central America. Of course, this is the genus that Ivory-billed Woodpecker is (was?) a member of. We watched the two female birds as they foraged and called back and forth, savouring the moment. Eventually they continued on, leaving us grinning from ear to ear. Our only regret was that the mid-day lighting was a little harsh for photography.


Declaring defeat with the Patagonia Forest Earthcreeper, we left the reserve and took a bus back to the main highway, then got off and attempted to flag down a different bus to take us to Lago Colbun. Lago Colbun is a man-made reservoir (the largest of its kind in Chile) that hosts a wide variety of water birds. Due to where the second bus dropped us off, we had a substantial walk to access the best parts of the lake.


We did well at the reservoir, picking up Spectacled Duck, Andean Gull and Burrowing Parakeet, as well as a few other new species for us in Rosy-billed Pochard, Black-faced Ibis, White-winged Coot, Southern Caracara and Andean Gull. There were thousands of ducks, grebes and coots to sort through, making me wish that we had access to a good quality spotting scope. Dave's mini scope was better than nothing, however.

We were pretty hungry after making it back to Talca and indulged on a Chilean fast-food staple - completos. Copious quantities of avocado and mayonnaise seem to be required. To add to my theme of photos of unhealthy food we consumed on the trip.


That evening we planned on taking an overnight bus south, hoping to arrive on Chiloe Island the following morning. While waiting for the bus, we made friends with this creature.


It turns out that we were waiting for the bus at the wrong terminal, and by the time we realized our mistake, the bus had long departed. This screwed our plans and the thought was that we would be sleeping at the bus terminal (good luck finding an open hostel at this hour), but luckily a different bus was leaving only an hour or two later. We were lucky!

As dawn broke, we were surrounded by the luscious, rain-soaked forests of southern Chile. Our time on Chiloe Island will be the subject of the next post.
Posted by Josh Vandermeulen at 10:27