Friday morning saw Jeremy and I heading north after a quick stop at Port Dalhousie to look for Fish Crows. We saw two crows cross the road in front of our car, and heard what sounded like a single note of a Fish Crow a few minutes later coming from the general area where the crows appeared to be heading, but that was all we would get!

Most of the day was spent driving and as the hours went by the thermometer in Jeremy's truck consistently dropped, one degree at a time. By mid afternoon we had made it to Hilliardton Marsh, located in Timiskaming District and north of New Liskeard (now known as Temiskaming Shores). I have always found it interesting how there are three different spellings in this part of the world: Timiskaming District, Temiskaming Shores, and the town of Temiscaming, located south of here on the Quebec side.

Our plan was to meet up with Todd Hagedorn and Mark Dorriesfield at some point during this trip as they had also driven up in Todd's car. As we approached Hilliardton we noticed two birders leaving the marsh, and were pleasantly surprised to see it was Todd and Mark, bundled up to stave off the -20 degree weather.


The four of us returned to the feeders which were occupied by a decent number of redpolls. Historically, redpolls have been treated as three species; two found in both North America and Eurasia (Common Redpoll and Hoary Redpoll), with an additional species (Lesser Redpoll) limited to Europe. However recent research suggests that each of the three types really aren't that different genetically, which suggests that there is quite a bit of gene flow between the three "species". It seems like only a matter of time until the redpolls are "lumped" back together, but until then birders can enjoy arbitrarily placing birds they see into Hoary, Lesser or Common boxes!


We studied the redpolls for about an hour, but it was getting late in the day and the numbers of birds began dropping off. Our plan was to return in the morning for an extended photoshoot. At any rate, we did see a handful of clear cut Hoary examples, so Jeremy could rest easy with his big year :)


We spent an hour or so right around sunset cruising some agricultural areas with hopes of crossing paths with a Great Gray Owl but were not in luck. A few Ruffed Grouse just after sunset ended up being the last birds of the day.


In the morning we left the warm confines of our accommodations (thanks Bruce!) and braved the -28 weather, which coupled with the wind chill left it feeling about -36 degrees Celsius. We ventured back to the marsh and enjoyed studying the redpolls.

Hoary-looking birds are usually quite rare in southern Ontario, with single individuals usually found scattered among the more numerous Common Redpolls, though some winters sees a bigger influx of them. However in northern Ontario Hoary Redpolls are much easier to come by. During some winters redpolls are quite common in the province, and in other years they are virtually absent. This winter, while not one of the extremes, trended towards a poor year for redpolls, but you wouldn't know that based on the activity at Hilliardton Marsh. Below are some of the individuals that fall on the Hoary side of the spectrum.


Hoary Redpolls are best identified using a suite of characteristics and many individuals are best left unidentified. In general, Hoary Redpolls are a frostier white colour with limited streaking, particularly on the flanks, undertail coverts and rump. Hoary Redpolls often show extensive white along the edges of the flight feathers and coverts, adding to their frosty appearance. The red "poll" on the top of their head is usually smaller than in Common Redpoll, and the bill often appears more pushed in due to the presence of feathers draped over the base of the bill. I haven't really found the last feature to be that obvious in the field, and slight changes in the angle makes the bill's projection appear drastically different. Males have much reduced red on the breast while a male Common Redpoll shows extensive red colour on the breast and even down towards the flanks.


A few birds were classic Common Redpolls as well, such as the individuals below. Compared to Hoary, Common Redpoll is generally much darker and streakier.


The two redpolls on the left hand side of this image are male Common Redpolls, showing the extensive red on the breast. 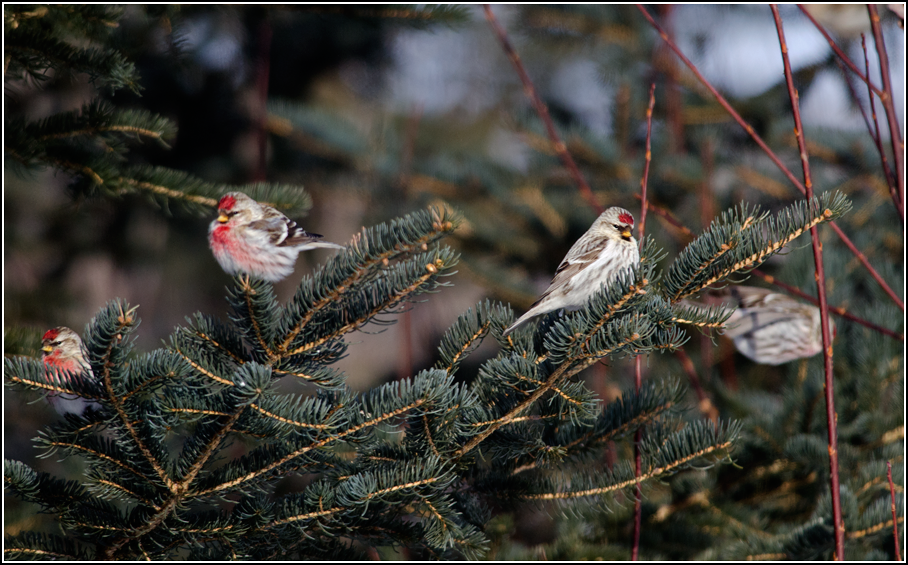 And a few images of some intermediate looking redpolls.


There were few other birds at the feeders, though we did see a couple of Evening Grosbeaks as they flew over.


Two American Tree Sparrows were also hanging tough, frequently visiting the feeders. This is right around the northern limit of this species' winter distribution.


This redpoll appeared to be a little larger than the other Hoaries and had very minimal streaking, causing us to think that it may be a member of the Hornemann's subspecies, which breeds in Greenland. It is difficult to say, however.


We finished up at Hilliardton by mid-morning on the Saturday and began the long trek north towards Cochrane and west to Hearst, but that will have to be the subject of the next post!
Posted by Josh Vandermeulen at 13:43

Great trip/shots/stories Josh! I know there are Redpolls that can't really be named (esp. if they're all one species), but I'd be inclined to say that most of your "redpoll sp." images are of Hoaries (top & bottom)... And many of the "hoaries" you've posted are pretty extreme/pale Hoaries... So much so, that I'd say some are candidate Hornemann's (and I'd call the very last photo a Hornemann's outright).

Thanks Brandon, I was hoping you would chime in, and I appreciate your thoughts! We were leaning towards Hoary for a lot of the birds as well, but since it was our first stop (and my first time seeing good numbers of redpolls in quite some time) it seemed really unusual that most birds fit on the Hoary end. But you are right, a lot of the ones I have labelled as redpoll sp. sure look Hoaryish! It was pretty weird; probably 3/4 of the birds seemed like Hoaries, yet everywhere else we visited on the trip the only redpolls we saw were Commons.