Our time in the Guyanese interior was coming to an end. Laura and I completed one final walk at Surama, enjoying the sights and sounds of the forest. We were going to miss this place! I managed one final lifer at Surama that morning - an Ocellated Crake calling from some grassland not far from the lodge. Try as I could, I was unable to get a visual, however.

Soon, our driver Thomas arrived and we headed off towards the direction of Lethem. Most of the day was spent in transit.We bumped along the dusty roads, watching the forest change into grassland. By early afternoon Thomas had dropped us off at the airport and we said our goodbyes. We killed some time by having lunch in town but eventually we got on the plane and took off, heading back to Georgetown. I had booked a hotel in town not far from the botanical gardens, and we hailed a taxi to take us there. That evening we went out for a nice dinner at a nearby restaurant and went to bed early. The next day would be a busy one with lots planned, including a visit of the iconic Kaieteur Falls.

We woke early and headed down to the lobby as the sky slowly brightened and the kiskadees called from all around. With this being our last full day in Guyana I was keen on exploring some of the coastal forest east of Georgetown, where several range-restricted bird species resided - Blood-colored Woodpecker, White-bellied Piculet, and Rufous Crab-Hawk. Our guide in Surama, Stefano, had a buddy who lived in Georgetown who was willing to drive us around for the morning for a reasonable price (around 40$), whereas if we had booked a half-day tour with Wilderness Explorers, it would have cost us 183$ USD each (!!). It is incredible to think that so many birders/naturalists who visit Guyana book everything through Wilderness Explorers when the prices are that insanely high.

The one drawback of arranging the transport through Stefano was that our ride never showed up. We had been pretty disappointed with Stefano's guiding abilities throughout our time at Surama and this was just the cherry on the top. We waited for an hour with no sign of his friend before we decided that we might as well explore the nearby botanical gardens on our own, instead.

We began by walking north to the coast to take a look at the seawall and mudflats. The tide was high during our visit which limited what birds were present, but we did see a good variety of species in a nearby canal, including photogenic Limpkins and Wattled Jacanas.


By mid-morning we arrived at the Georgetown Botanical Gardens. Located in the heart of the city, the botanical gardens are a green oasis that is a haven to a wide variety of wildlife. Few other people were in the gardens today, leaving us with all the birds.

Over the course of the morning I added eight life birds out of the nearly 60 species we encountered in the gardens. Several Festive Parrots were seen as they flew over, though the most common parrot species was Red-shouldered Macaw. Several large flocks were present throughout the morning and we even found a few nests.

For some reason raptors are positively abundant around the botanical gardens; mostly Snail Kites, but also good numbers of Black-collared Hawks and singles of Roadside Hawk and Gray-lined Hawk.

Yellow-chinned Spinetail is the default spinetail at the gardens. While not a lifer (I had heard several along the Burro Burro River in Surama), it was great to have our first looks at this species.

Flycatchers were common throughout the park. Among the typical Great and Lesser Kiskadees and Tropical Kingbirds, we also enjoyed watching the antics of several Gray Kingbirds, a pair of Cinnamon Attilas and our first Short-crested Flycatcher, as well as several other more common species.

Lineated Woodpecker may be a common Neotropical species, but watching one work over a dead branch only a few meters from us was a treat.

Meanwhile, a Bat Falcon surveyed the scene from a distant snag.

Of course birds were not the only attraction at the gardens. Laura and I always keep an eye out for herps and were rewarded with several sightings of impressive Gold Tegus. Spectacled Caimans were also present in some of the ponds.

By having our morning plans of birding the coastline east of Georgetown canceled, it effectively snuffed out our chances of seeing Rufous Crab-Hawk, but both Blood-coloured Woodpecker and White-bellied Piculet can be found in the botanical gardens. We had already been at the gardens for a couple of hours without any luck, so I was starting to lose optimism.

While birding near some wooded ponds along the north side of the gardens during the late morning we had a string of great bird sightings. First, an American Pygmy Kingfisher flew past, which was the last kingfisher species that I "needed" for the Americas. Later, a small flock of Turquoise Tanagers foraged in the trees above us. Then Laura made a great find with a Blood-colored Woodpecker which we watched for a few minutes until it flew out of sight! And finally, I heard a White-bellied Piculet call, which was very responsive to my playback and ended up perching right above our heads.


That afternoon we had tickets booked on a flight to Kaieteur Falls. Without a doubt Kaieteur is the biggest tourist attraction in Guyana, as it is the world's largest single-drop waterfall by volume of water. Adding to the allure is that the waterfall is found on the edge of the remote Kaieteur Plateau, being surrounded by mostly untouched forest. The easiest way to access the falls is to book a ticket on a chartered flight, since there is no road access.

Our flight left around 1:00 PM and would take an hour or so to reach the tiny airstrip beside the waterfall. We would then have about two hours on the ground where one of the national park guides would take us to several viewpoints before getting back on the plane and flying back to Georgetown. 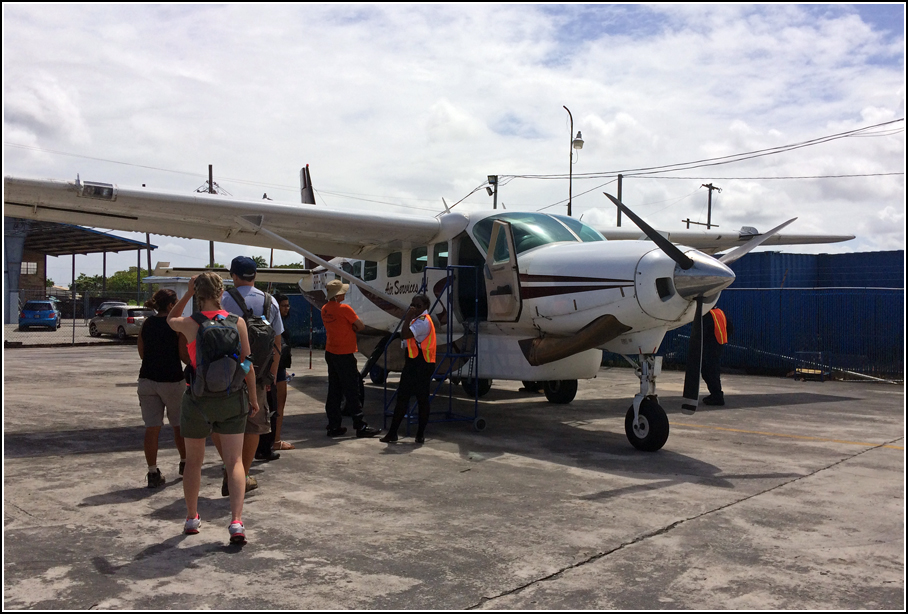 We were really glad that we decided to book the trip as the waterfall was incredibly impressive. Back home Laura and I live in the city of Niagara Falls, and our house is only a 20 minute walk to the iconic waterfall that the city is named after. But Kaieteur Falls puts our hometown waterfall to shame. It is around four times the height of Niagara Falls, and is surrounded by beautiful forest as opposed to development and thousands of tourists. Quite a contrast, indeed! 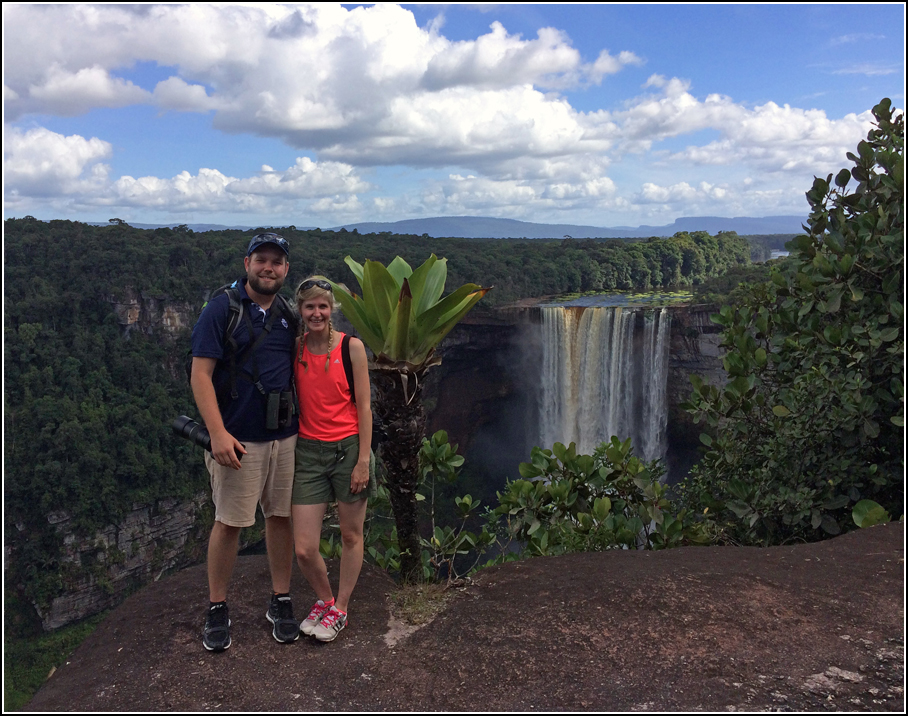 I was also interested in doing the Kaieteur Falls trip from a naturalist's perspective since it would be our only chance to see this part of the country and the resulting species found here. Unfortunately our time on the ground was rather limited and we were forced to stick with the guide and the other tourists on our flight; about 10 of us in total. On a few occasions I paused briefly to look at a bird, only to get dirty looks from the guide and other tourists. Despite these restrictions I was able to see a few birds including my first Cliff Flycatcher and Plumbeous Euphonia. One of my main targets was Orange-breasted Falcon, which is a scarce species found throughout the Neotropics. A pair nests at Kaieteur though and is often seen by birding groups that visit here. We had no luck while at the first viewpoint, but got lucky at the second viewpoint and had one of the individuals flying around. Awesome!

By peering into some of the bromeliads beside the trail, Laura and I were able to find a few Golden Rocket Frogs. This species is only found on the Kaieteur plateau and is most easily seen at Kaieteur Falls.

We also discovered this species, known as Leptodactylus rugosus, alongside the path. This species is found in western Guyana and central Venezuela, as well as possibly northwestern Brazil. I made sure to only take a few photos of this species in an attempt to avoid the scorn from the guide and the other tourists.

A well-known lek of Guianan Cock-of-the-Rocks is found near Kaieteur Falls. I was not expecting this to be a part of the tour, given the guide's reaction to me stopping to look at birds earlier, but to our pleasant surprise, he took our group over to see the cotingas. Four males performed on cue, bobbing and weaving to attract the attention of a waiting female. It really was an incredible experience, especially since the views were much better than at the lek near Atta Lodge a few days earlier.


Soon enough our time at Kaieteur Falls came to a close and we boarded our plane for the ride back to Georgetown. It had been a full but excellent day! In the morning we would be flying out of Guyana to begin the journey back home. But first we would have a few days in Trinidad and Tobago.