August 12, 2012 (continued)
I ended my last post with some photos of shorebirds I took on a perfectly calm evening (August 12). Here are the rest of the photos from that night!


August 13, 2012
This was my second last full day on the coast! It was another warm and sunny day and I ended up going out to the tip of Longridge Point with Jean, Barb and Deborah while Ian and Andrew went out to West Bay to try to relocate the Buff-breasted Sandpiper I had found the previous day.

Again, we had a couple of flocks of migrant Snow Geese go over. Being from southwestern Ontario I was not accustomed to seeing pure flocks of Snow Geese - normally we only get single individuals mixed in with Canada Geese.


The winds were too light and the tide was about a meter lower than it had been a week prior so there wasn't much happening at the seawatch. We hoped for a jaeger or interesting gull, but it was not to be! Our most interesting sighting were 2 juvenile Marbled Godwits that flew in off of the lake, landed for a minute, and then took off towards the West Bay after being harassed by gulls. This was the only sighting for our camp of Marbled Godwit!


I was happy to pick out a second winter Little Gull loafing with the numerous Bonaparte's at the very tip of the point. It provided a great comparison! The rest of the day was uneventful and very little was seen. At one point 4 Red Knots flew over, my first sighting in quite some time. It was a little worrisome that there were so few knots showing up.

August 14, 2012
My last full day on the coast! I had planned to do another round of invertebrate sampling with Andrew today so I left the camera and scope behind for the day. Good thing, since we didn't see anything of too much interest while we were out doing the sampling. The highlight of the day was a few belugas whales that weren't too far offshore. Jean and Deborah were nearby and we radioed them to check em out.

I took a few minutes to photograph a really beautiful Hudson Bay Toad that was sitting on a path right in camp sometime in the morning as well.

That evening we were treated to a beautiful sunset with a rainbow. It was spectacular on the coast, if one could find a way to ignore the mosquitoes. 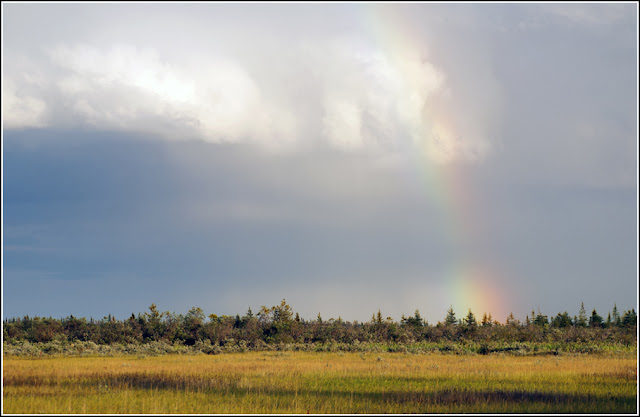 Andrew had found a Gray Wolf walking along the edge of the treeline so everyone came out to look for it! Unfortunately it had disappeared by that point.


August 15, 2012
Today was the day that the helicopter was supposed to come! Since I hadn't done so yet, I spent part of the morning taking some photos around camp.


It was someone's idea to come up with a team name for us with "bird" names for everyone...We had some discussion as to what the name should be and eventually settled on Team No-Knots due to the distinct lack of Red Knots at our study site. Your's truly even drew the Red Knot...not bad eh? ;) 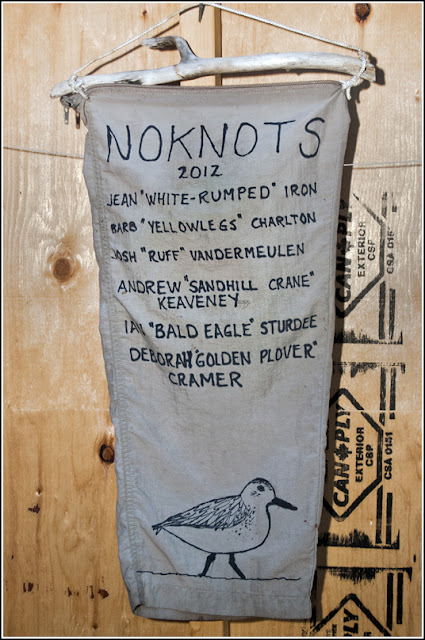 There is a saying that you are never supposed to pack up your sleeping bag until you hear the helicopter coming. So many times due to a variety of reasons the chopper could be delayed and you could be stuck at camp for extra days. Unfortunately most of us had packed up all of our gear that morning, so naturally the news came in that the helicopter would be delayed a day in arriving. It would drop off the next crew for this camp, but wouldn't take us back since it would instead go up the coast to pick up the Chickney Channel crew. There just simply wasn't going to be enough daylight to take both crews back to Moosonee.

Eventually, around 7:00 PM, we heard the distinctive sound in the sky and the MNR chopper came in. 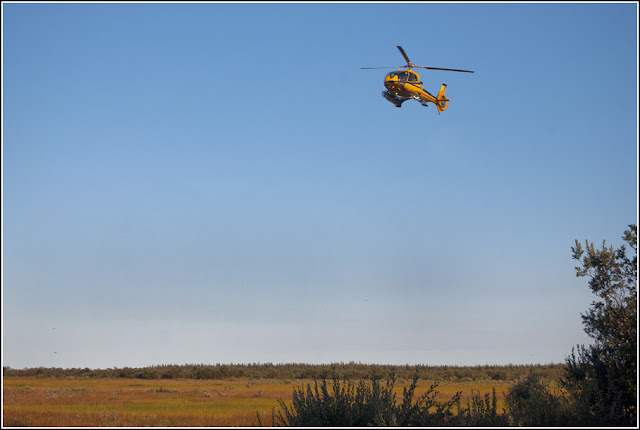 Imagine our surprise when they told us we were leaving then! Apparently they had arrived later than expected and there wasn't enough time to get the Chickney Channel crew after all, so they were going to bring us back after all. A hectic pack of all our gear, and we were off!

The next two days were spent driving home. After two weeks on the coast, away from civilization, it was a bit of a shock to return to the highways and the cities. I was going to miss the coast, but knew that I would be back sometime this fall.

I will have one more post about this trip soon - basically just a summary post with some numbers/highlights etc.
Posted by Anonymous at 13:46

That toad is REALLY cool.