I was up bright and early the next day to make the several hour drive to Antisana Volcano. But first, I stopped along the one-way paved road that leads from Papallacta back to the highway. It passes through good habitat and I was hoping that traffic would be minimal at the early hour.

I guessed correctly, but visibility was also in short supply due to heavy fog. I birded the road for around forty-five minutes, striking out on Chestnut-naped Antpitta but finding a bonus Páramo Seedeater, only the third I had ever seen. This individual, a male, was skulking around some Chusquea bamboo as this species is known to do.

I got back in my Chevy Spark and crossed over the Papallacta pass, the sun coming out as I began my descent towards Quito. Antisana loomed to my left, its peak fully unobscured due to the clear conditions.

By 9 AM I had entered the park. Note to others who plan on visiting Antisana – the guard at the checkpoint insisted I leave my passport with him, in exchange for a numbered placard that explained all of the rules of the park. I would not be able to enter the park without leaving the identification with him. I was a bit leery of this but relented (hard to find the Andean Ibises and Andean Lapwings otherwise). Fortunately, this was not an issue and I successfully exchanged the placard for my passport upon my departure. I guess this is a good way to ensure that guests leave on time. In hindsight I wonder if I could have left my driver’s license or other ID with him instead, but it all worked out in the end. 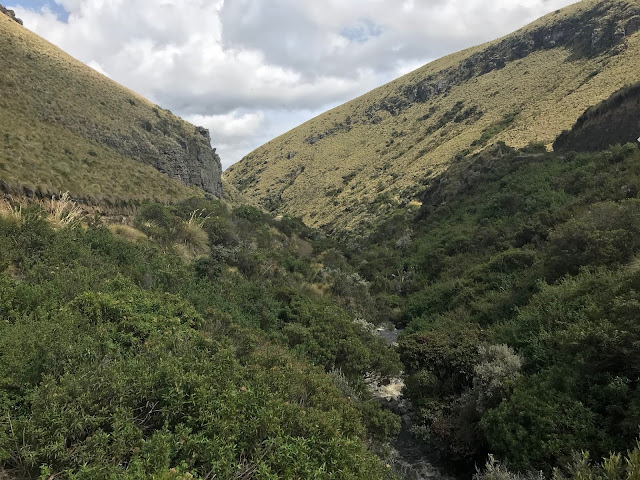 My first stop was a bridge that passed over a small creek a few kilometers after entering the park. The riparian corridor surrounding the creek (pictured above) looked like a magnet for birds in the otherwise grassy, open environment.

This proved to be an excellent first stop. I heard a Streak-backed Canastero, one of my targets for the day, along with a pair of the more widespread Many-striped Canasteros. Black-tailed Trainbearers and Ecuadorian Hillstars frequented the flowers. I had an adult Peregrine Falcon fly over, an uncommon species in these parts, and also enjoyed a photoshoot with a curious Sedge Wren.

It is unfathomable that these Sedge Wrens, inhabitants of the high páramo, are the same species that live within midwestern prairies and wetlands thousands of kilometres to the north. Their song especially is vastly different.


To top it all off a pair of Andean Condors flew overhead. Antisana is probably the best place in Ecuador to see this iconic species, and it is said that over 30 individuals make their home here. While condors were positively abundant when I visited Patagonia in 2016, here in the northern part of their range they are decidedly less common.

I continued on after that welcome diversion, making good time across the grassy landscape. Birds were not too abundant for most of the drive. Cinclodes however were easy to find, mostly Stout-billed, but a few Chestnut-winged as well. I also found some Páramo Pipits, though they unfortunately eluded my camera.

All the while, I kept my eyes open for Andean Ibises or Andean Lapwings, two species I had never encountered before. Most eBird checklists had both species on them so I held high hopes. Eventually I rounded a bend and Antisana appeared in the distance. Its peak was now covered in clouds, taking away from its prominence but impressive all the same. Here is a photo I snapped from the car a bit further along.

Carunculated Caracaras dotted the grassy areas throughout this broad valley. I had never seen so many in one spot! Many were not shy, strutting right next to the roadside. Carunculated Caracara is a finalist for “best bird name in Ecuador”, in my mind.

Some movement in the grass drew my attention. An Andean Lapwing! I excitedly snapped a few photos though the conditions were very tough with a bit of haze. A few more appeared, including one that flew past.

Up ahead I heard odd bird calls, sounding almost like a toy horn. I could see a big flock of Andean Gulls along with six larger birds, obviously the individuals who procured the sound. Ibises! I forgot about the lapwings and pointed my car up the road, hoping to catch up with the birds as they flew. Fortunately, they landed directly adjacent to the road!


Andean Ibis used to be considered a subspecies of Black-faced Ibis but in recent years the high-elevation populations in Peru and Ecuador have been afforded species status by some authorities. Antisana is THE place to look for them in Ecuador. These ended up being the only Andean Ibises I observed for the day so I felt very lucky that they decided to spend some time along the roadside where the views were incredible.

Of course, a few Carunculated Caracaras were around and between them and the gulls it was hard to obtain a clean photo of an ibis.

I was 3/3 with my target species for the day and so I continued on to Laguna La Mica, one of the main tourist spots in the Antisana Reserve. My goal here was a little different than most of the tourists enjoying the sunny Sunday. I parked and walked through the next checkpoint (and having to write down my passport number – fortunately I had the number memorized). Apparently Silvery Grebes are well-established on the lake. It took about five seconds of scanning before I noticed a loose flock of them, the first that I had ever seen in Ecuador. Quite a few ducks were also floating on the water (Andean Ducks and Yellow-billed Pintails), while a locally scarce Neotropic Cormorant loafed on the shoreline. I was happy to find an Andean Lapwing on the muddy shore as well, providing much better looks than the previous ones. It was a little far for good photos, however.

Near the lake were good numbers of cinclodes, as well as Plumbeous Sierra- Finches, Plain-capped Ground-Tyrants and Plain-colored Seedeaters (like the male pictured below).

On my drive back out, I stopped to observe some deer in one of the fields. I maneuvered my car so that Antisana worked as a backdrop while I photographed the White-tailed Deer (yep, that species!).

I made one more stop on my way out, back at the first bridge where I had started my morning in Antisana. I hoped to find Black-winged Ground-Doves here since it was also a species I had never seen before in Ecuador. Just as I arrived the rain began. The ground-dove search was put on pause as I napped through the rainstorm. It eventually stopped and I gave the doves a half-hearted search, but the vegetation was very damp and so I did not last very long before giving up.

The Papallacta and Antisana portions of my trip had both been resounding successes. I found a cheap hotel in Tababela and began preparing for the next day. I was hoping to put in a solid search for Imperial Snipes at the Yanacocha Reserve.
Posted by Josh Vandermeulen at 17:00