Near the end of Mark's week with us we decided that we would take him up into a new habitat - páramo. These high-altitude grasslands occur in the areas above the treeline, and due to Quito's altitude (around 2850 m), there is reasonably accessible páramo that one can visit.

A cable car called the TelefériQo opend in 2005, representing one of the highest aerial lifts in operation in the world. The cable car begins on the edge of town at 3117 m and rises up to a hair under 4000 m. The cost was pretty reasonable - about 8$ per person, round trip - and great hiking opportunities abound at the top! 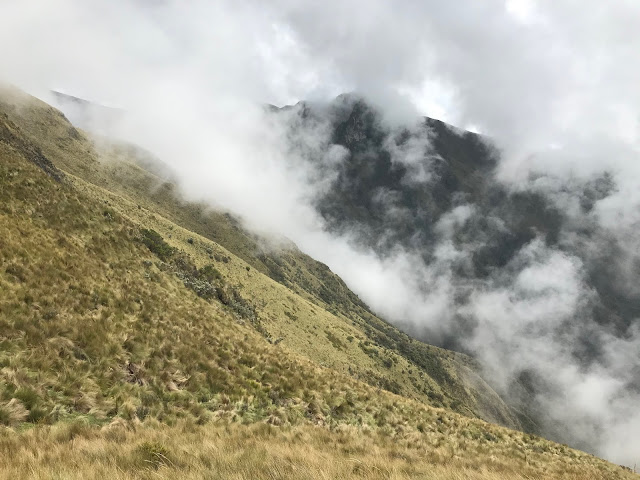 We packed lunches and rain gear and grabbed a taxi over to the cable car, arriving at 9:00 AM. Due to our (relatively) early arrival time there was not much of a queue at all and we were soon making our way up the side of the mountain. The views were pretty incredible overlooking the city, as the vegetation below us changed from eucalyptus forest to elfin forest and finally, to grassland - all in the span of just twenty minutes. 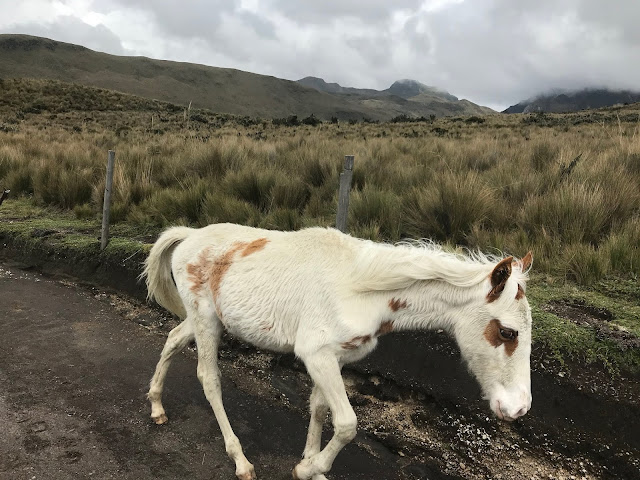 We left on one of the many trails, picking one that meandered towards the Ruku Pichincha summit quite a distance away. There were a few other people but we mainly had the area to ourselves.

Tawny Antpittas were by far the most vociferous of all the birds, though it was difficult at first to obtain a clean look at one. A Many-striped Canastero (great name!) was one of the first birds to show itself to us. High Andean habitats like this may lack species diversity, but there are some really interesting ones that eke out an existence here.

Hummingbirds are relative diverse at these altitudes and we identified four species in our travels. I noticed that some orange Chuquiraga flowers were in bloom - the favoured species for the Ecuadorian Hillstar - and mentioned that we should be on the lookout for this range-restricted and beautiful species.

Sure enough, a male Ecuadorian Hillstar flew in a minute later, seemingly showing off its plumage. A much better view than the distance ones that Laura and I observed at the Papallacta Pass back in March, and a very memorable hummingbird for Mark.

Ecuadorian Hillstars ended up being surprisingly common and over the course of the day we observed at least eight - most being adult males. Some species of hummingbirds are somewhat nomadic, following the flowering schedules of their favourite plants. While the hillstars may be common now, at other times of the year they will be impossible to find here, if the Chuquiraga is not flowering.

Luckily the rain held off and we also encountered very few other people in our travels. We slowly added new birds throughout the day - Sparking Violetear, Sedge Wren, Plain-colored Seedeater, Plumbeous Sierra-Finch. Others were heard only, including Curve-billed Tinamou and Stout-billed Cinclodes.

Insects were few and far between but we did find quite a few butterflies of one species that I still need to identify, as well as this crisp Shining Leaf Chafer beetle.

Mark seemed to really enjoy birding and he very quickly become comfortable with using the binoculars. He found this Chestnut-winged Cinclodes which ended up being the only one of the day!

Selfie in the páramo... 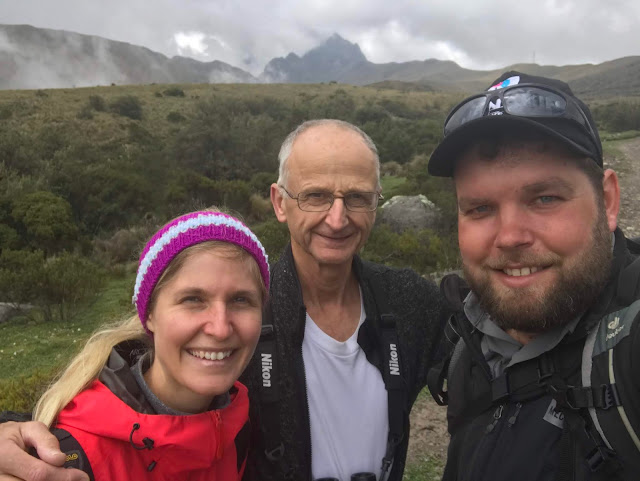 By late morning we had completed a big loop and were close to the TelefériQo again. A creek flowed down the hillside; we decided that we would walk a gravel road that ran parallel to the it. Often, creek-beds concentrate birds and this one was no exception. A few Black-billed Shrike-Tyrants perched on prominent branches, while a nice mixed flock passed through very low, comprised of Cinerous Conebills, Plain-colored Seedeaters and Brown-backed Chat-Tyrants. Many Brown-bellied Swallows were also cruising around since the sun had come out, albeit briefly.


The Tapeti is a widespread species of cottontail that happens to be common in the grasslands and páramo at these elevations. We saw quite a bit of their evidence and even found a few.


With a successful day in the books, we made our way back to the TelefériQo for the short journey back to civilization. But there was one more avian surprise in store.

I scanned the sky, hoping to add a raptor to the day's list, when a pair of Swallow-tailed Kites soared into view. I quickly assisted Mark and Laura in getting on the birds, then entered the sighting on my eBird checklist that I had on-the-go on my phone. It came up as a rare sighting, and my camera was packed away, so I immediately threw off my backpack and grabbed my camera. Fortunately the kites circled back over our heads. allowing us to have better looks as well as a chance at "record shots".


It turns out that Swallow-tailed Kite is a very rare species in Quito. There are no previous records on eBird for the city as the species is typically found in lowland and foothill habitats. I was later contacted by an Ecuadorian birder for the details on the sighting since it would make their annual report summarizing rare bird records. A very cool way to conclude our time in the páramo.

Posted by Josh Vandermeulen at 12:15