The next morning we said our goodbyes to David and Siobhan when we dropped them off at the bus station in Puerto Lopez. They were moving on to the next leg of their Ecuador trip, two weeks in Galápagos. Laura and I unfortunately had no scheduled a visit to Galápagos during our three-month stay in Ecuador, figuring that we would visit sometime at a future date when finances more easily allowed. But we still had a chance to get a taste of what the Galápagos archipelago is like.

Isla de la Plata is located around 30 km offshore the town of Puerto Lopez in southwestern Ecuador. Featuring a similar climate to Galápagos as well as seabird colonies and productive snorkelling opportunities it has been dubbed as the "poor man's Galápagos". We found a tour operator at the Puerto Lopez waterfront and signed up for a day trip on the island. The different tour operators all follow a roughly similar itinerary. The hour and a half boat trip over to the island is followed by some hiking to explore the Blue-footed Booby colony. After several hours on the island, an hour or so of snorkelling would follow. Lunch and snacks would follow, and the boat would return to the harbour in Puerto Lopez by mid-afternoon.

The speedboat ride to the island did not produce much in the way of wildlife sightings but we kept vigilant for seabirds. Earlier in the autumn is better to find birds offshore, especially Sabine's Gulls which migrate through the area. We did not come across any Sabine's but a Red-billed Tropicbird sailed overhead and a Sooty Shearwater passed by in front of the boat. Soon, the island loomed in the distance followed by the smell of the seabird colony. We could see clouds of Magnificent Frigatebirds and Blue-footed Boobies as we approached, and a few Green Sea Turtles swam in the water beside the boat, hoping for a handout of lettuce which was granted by the staff on our boat.

Our tour guide was OK. You could tell that this was about the 1000th time that he had given this identical tour, and his knowledge of the flora and fauna of the island was surprisingly limited. But he allowed us to go at our own pace without forcing the group to stay together in a small area, affording us with additional freedom to see birds and lizards at our own pace.


Thousands of pairs of Blue-footed Boobies populate the island and in mid-November there are chicks at all stages of development. These were Laura's first good looks at Blue-footed Boobies and for me, the first time I had seen a large colony of them up close.

Isla de la Plata is a protected area managed by Parque Nacional Machalilla. One of the ongoing projects on the island is the trapping of introduced rats. It has seen great progress in recent years as the number of successful booby nests has increased drastically with a lighter rat presence on the island.


The individuals were not particularly shy, affording us the chance to see courtship behaviours.


The Blue-footed Boobies and Magnificent Frigatebirds formed the dominate species in the seabird colony but a pair of Waved Albatrosses also frequented the area (their nest was off-limits to the public). We observed Nazca Boobies offshore as well as a quartet of Red-billed Tropicbirds.

Landbirds were harder to come across, especially given the time of day. Collared Warbling-Finches were relatively common as were Long-tailed Mockingbirds. We found a Short-tailed Woodstar, a Gray-and-white Tyrannulet and a Vermilion Flycatcher as well.


The mockingbirds at the main boat landing/administrative building were quite habituated to people and tried to convince us to feed them, or to open our water bottles for them. We resisted despite their cuteness!

Several "scamperers" populated the edges of the trails. Each one I stopped for appeared to be a Microlophus occipitalis which is a widespread species in the dry Tumbes bioregion.

With our time on the island coming to an end we gathered back into the boat for an hour of snorkeling in a nearby bay. I did not bring my underwater camera with me - so no photos - but it was excellent with a wide variety of fishes. Definitely the best snorkelling that Laura had ever done!

We enjoyed some snacks on the long speedboat ride back to the mainland. Many of us unsuccessfully resisted the urge to nap but we were jostled awake with shouts of "whale!". For the next twenty minutes we watched a trio of Humpback Whales from a safe distance as they slowly moved south. This was a fortuitous sighting; normally the humpbacks have finished their passage through the area by November.

We enjoyed our time on Isla de la Plata. Normally we are not ones to go on guided tours but this one was surprisingly pleasant in a beautiful area, with some great wildlife experiences! 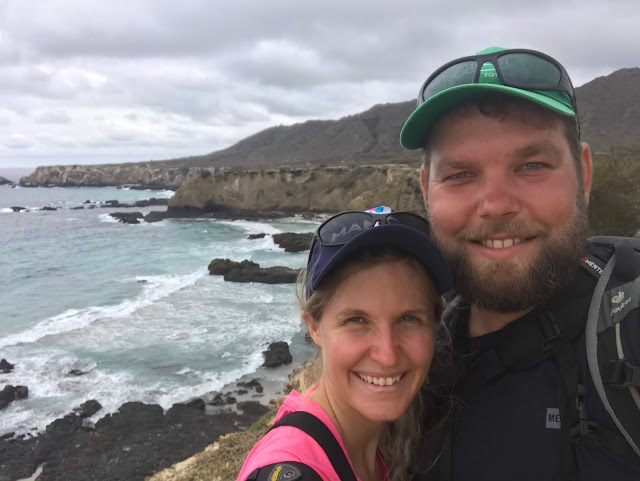 Posted by Josh Vandermeulen at 12:17