Yep, we went to Netitishi and back. Twice. Our bird totals included some Canada Geese and some duck sp. Trip highlight was probably the 4 Moose we saw! 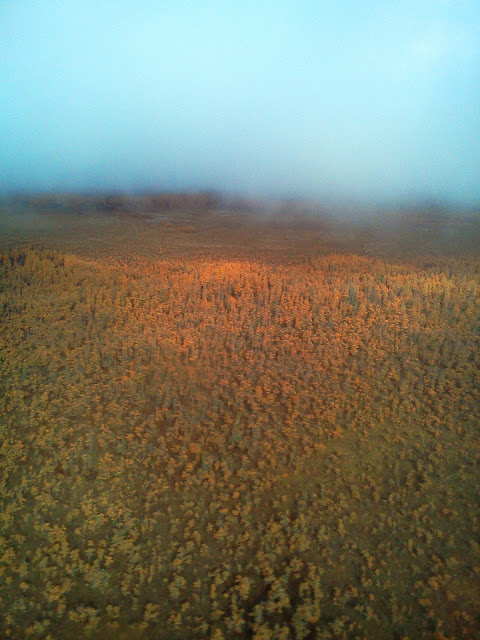 See that blue/white thing in the top of the crappy cellphone shot I took from the chopper? Its a massive fog bank that seemed to cover the whole coast. We tried to land, but it was way too thick and we had to go back, despite being only 400 meters from Netitishi Point. We tried again a few hours later, but the fog was even thicker, so we were forced to call it a day. It was super frustrating not only for us, but for our pilot who was hoping to get a few more flights in today.

To make matters worse, a Tufted Duck was found by Bruce DiLabio and co. in Ottawa today! Not only a potential year bird, but it would be a new Ontario bird for me as well. So for those keeping score at home, this is "Rarity and Potential Yearbird" #1. How many more will I miss before this Netitishi trip is over? My guess is 4...

Here's hoping the fog lifts tomorrow, the weather forecast improves, and we can actually get to the coast!
Posted by Anonymous at 21:14