February 25
We awoke early in Cave Creek Canyon to yet another cold morning, on our last full day in Arizona. Come to think of it, on most days this trip we encountered temperatures before freezing! This cold morning did not deter Dave though – he still had a “road shower”. All you need is a bottle of water, a t-shirt to use as a towel, and a road.

Like the previous day, we started this day by driving back down the mountain to the desert where the temperatures would hopefully be warmer. We ended up at the NM/AZ border and the birds were active. It didn’t take long before we spotted a covey of Scaled Quail on the New Mexico side. We got out and admired the birds, but couldn’t tease one to run across the road into Arizona (Dave still needs this bird for AZ!).  Other birds around included “Lillian’s Eastern Meadowlark (NM), Ferruginous Hawk (NM), Lark Bunting (AZ, NM), Vesper Sparrow (AZ, NM), and Prairie Falcon (AZ). Our main goal though was to check out the area around Willow Tank where a few species of longspurs had been seen lately. Well, as expected, we dipped on these birds.
After a bit of confusion, we managed to find Dave Jasper’s famous feeders where we saw, among common birds, Curve-billed Thrasher, Northern Cardinal, Pyrrhuloxia, and Western Scrub-Jay.

The sun had finally started to warm the area so we headed right back up the mountain. All we ever seemed to do on this trip was drive up and down mountains!

We drove down to Paradise and managed to get brief looks at a Black-chinned Sparrow and Golden-crowned Kinglets. The hike up Cave Creek Canyon was fairly uneventful bird wise, but slowly the birds started to show themselves. A Northern Mockingbird was nice to see as were the Red-naped Sapsucker and Spotted Towhee. I was really determined to find an Arizona Woodpecker so I pulled over at a decent looking spot and promptly saw a woodpecker fly across the road. We finally had good looks, and it was an Arizona! A second one was near the vicinity. Perhaps our luck in Arizona had finally turned.

We were getting a little tired of birding so we made a detour to hike straight up the side of the mountain to a cave where a mountain lion supposedly hangs out. It was really nice to actually spend some time hiking in this incredibly scenic place, as most of our time in Arizona so far had been spent driving. We explored the cave for quite some time, enjoying the scenery and soaking up the rays. 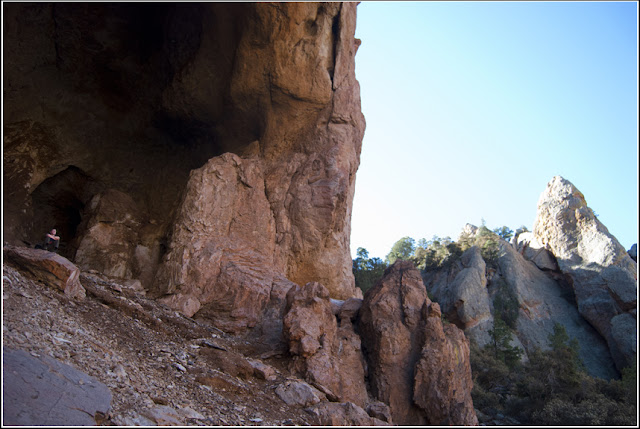 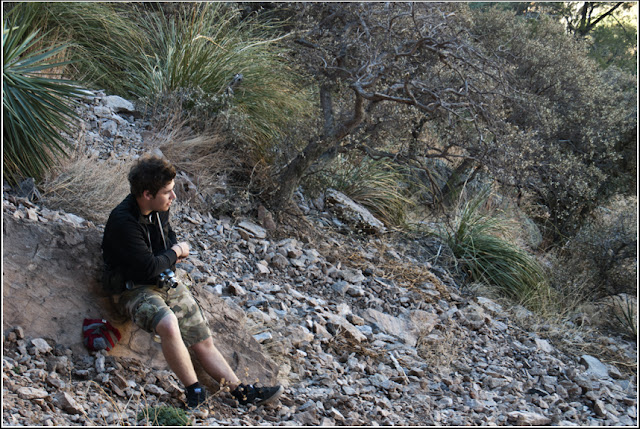 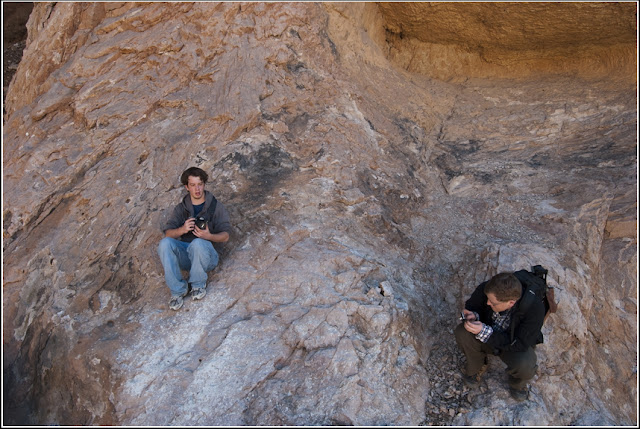 What a cool place! I definitely would love to return some time as this place looked perfect for some species of hard to find snakes such as montane rattlesnakes. Unfortunately we didn’t really see any herps on this February day. 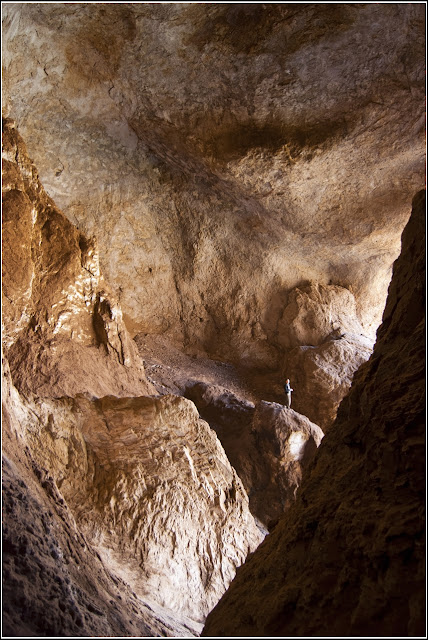 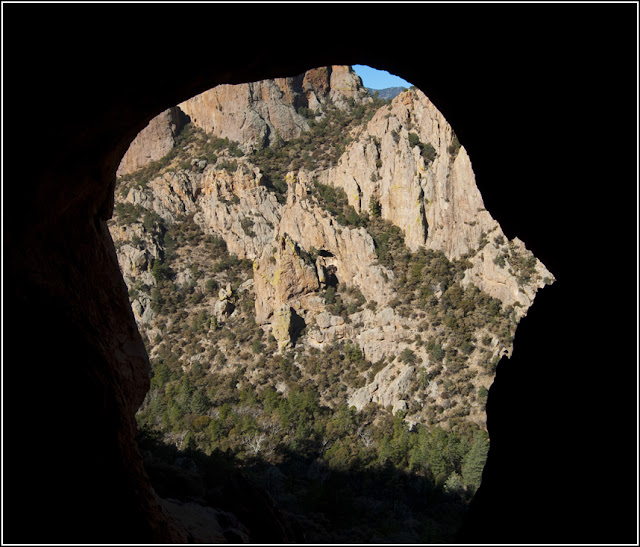 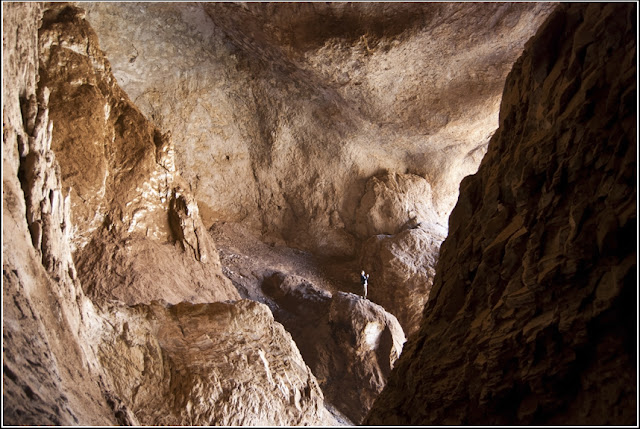 Up next on the agenda – Barfoot Canyon for some of the montane specialties we had yet to see. Yellow-eyed Junco, Juniper Titmouse, and Mexican Chickadee were our main targets here and we managed to get great looks at them all! We saw our only Brown Creeper for the trip and got a Hairy Woodpecker too. The ride up the Canyon was filled with switchbacks, random spots with a foot of snow, and incredible views. We parked near the summit and hiked the rest of the way up. Here, at 12,000 feet we saw a roving flock of Pygmy Nuthatches. I mentioned to Dave that this was my “highest” lifer, but he had to one up me and mention the White-tailed Ptarmigans he had out west at a higher elevation. 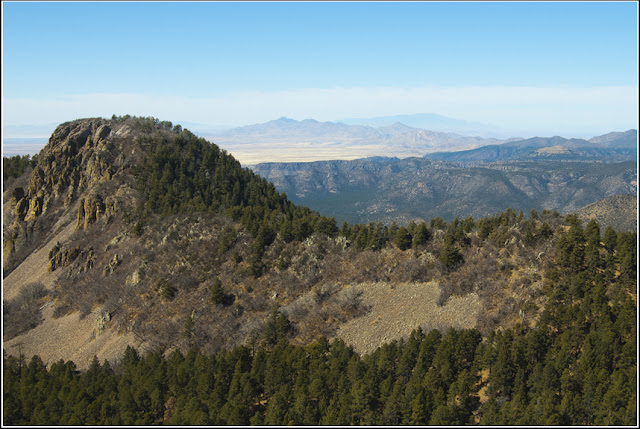 The view at the top of Barfoot was, as expected, spectacular! Mountains surrounded us, gradually diminishing to foothills and eventually desert. Unfortunately we had to leave this wonderful place, and Arizona, shortly after to head back to Cali. 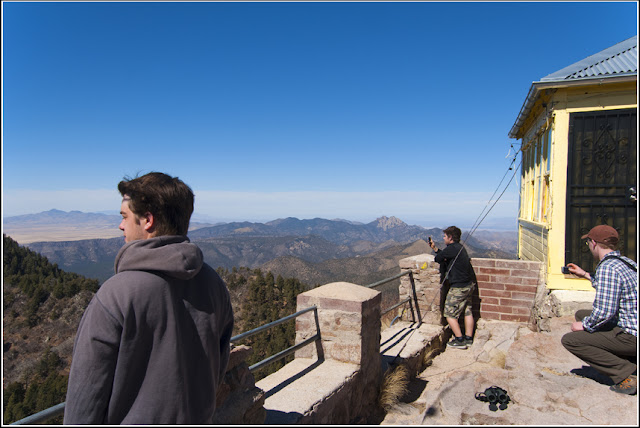 On the way we made a last ditch effort for some desert birds near Tuscon but didn’t see anything new. Afterwards we made the decision to race over to the Santa Cruz flats for one last shot at the rarities that were still being reported there. We missed them once so there is no way we would miss them again! Well, we did. At one point we were so desperate to see some Colorado Dirtpipers (er...Mountain Plovers) that we ended up spotlighting a field in the dark for them. I even jogged to the middle of the field with a flashlight and searched all around. I did hear some shorebirds calling in the distance but wasn’t 100% confident they were the dirtpipers. Fortunately the farmer did not see who, as I certainly would have been taken out with a shotgun. From here we drove straight through the night to Ventura on the California coast to hopefully take a boat to Santa Cruz Island. Matt and I drove the whole way while Dave and Brett were passed out in the back, probably getting the best night’s sleep of the trip! It was not one of the easier drives I have done, as I fought sleep-deprivation, hallucinating, torrential rainfall, and idiotic California drivers.
While we struck out on most of our target species in Arizona, we still had a blast and saw a ton of cool things. We still managed to see most of the montane birds, tried some awesome local restaurants, saw some amazing scenery, and overall had a good time with a good group of guys.

Part 6 of our trip will cover a full day of birding in Santa Barbara County, California.
Posted by Anonymous at 14:59