Steve, Andrew and I birded the Parque Natural Metropolitano for a few hours in the morning - the last of our Panamanian adventure. We were hoping to add a few final target species at the park, such as Yellow-green Tyrannulet, one of about 12 bird species that are endemic to Panama.Steve only had a short time in the park before he had to leave for the airport, while Andrew and I birded the park until 9:30 AM.

The 265 acre park is an oasis within an urban area; not only popular with dog-walkers, runners and cyclists but also birders. It consists predominately of lowland deciduous forest and boasts a huge species total (the eBird hotspot for the park has 373 species).

Our time here was relatively birdy, and highlights among our 71 species included several Rosy Thrush-Tanagers, Pale-eyed Pygmy-Tyrant, Olivaceous Woodcreeper (a new one for me), my long-overdue lifer White-lined Tanager, and the big highlight: a Yellow-green Tyrannulet providing excellent looks for Andrew and I on a bare branch right above the trail.

Whooping Motmots are not necessarily a shy species, but they rarely forage on the ground only a few feet away from people. This individual must have been much more acclimated to human presence since it did not seem to mind the people walking past.


My flight did not depart until early in the evening meaning I had all day to join Andrew in doing some birding. We made the decision to head back to Old Gamboa Road where we would meet up with Jenn for a few hours.

It was quite warm during our late morning excursion here, putting a damper on bird activity. I was happy to add Tawny-crowned Greenlet to the list, along with a wide variety of species that we had observed earlier in the trip at Old Gamboa Road.

Jenn knew the location where a Spectacled Owl roosted, and it only took u a minute or so of searching until it appeared. Awesome!! 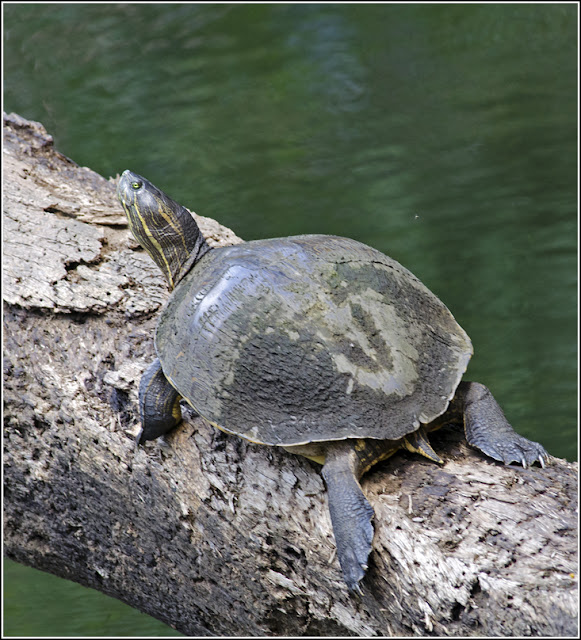 The three of us were pretty hungry after the morning of birding so off we went to a pizza place in the town of Clayton that Jenn recommended. A very tame Fork-tailed Flycatcher was hanging around the parking lot - with the hot temperatures, it was keeping its mouth open as a sort of air-conditioning! It was here I also added my last new bird of the trip - an introduced Saffron Finch on the grass beside the parking lot.

Andrew and I said our goodbyes to Jenn, then debated where we should spend the rest of the afternoon. There really wasn't a whole lot that I still needed from the Canal Zone, plus the hot temperatures had undoubtedly put a damper on the bird activity. We decided to drive over to Costa del Este to scan the shorebirds and gulls once more.

It was here that I began to experience quite a bit of discomfort that came on suddenly and I ended up spending more time crouched in the mangroves than actually scanning the birds. This was the first time I had ever experienced some sort of illness while traveling, but fortunately I was well-stocked with Imodium. I don't recall much in the way of bird sightings that afternoon but there wasn't much of anything that was new I don't think. Andrew was kind enough to drop me off at the airport later that afternoon and luckily the Imodium had begun to kick in, preventing what would otherwise be a very uncomfortable international flight!

It had been a wildly successful trip to central and eastern Panama with good friends. We found almost 500 bird species in 17 days, while also experiencing a range of other wildlife sightings, visiting some unique and beautiful areas, and experiencing Panamanian hospitality. It is certainly a country I will visit again in the future sometime - the western mountains and Azuero Peninsula in particular are places I would love to explore.

Awesome photo of the Spectacled Owl!