The next morning we awoke by 4:30 AM and by 5:00 were on our way up the mountain thanks to a local man with a 4x4 truck, whose services our host had arranged for us the previous evening. By dawn we had climbed slowly higher into the mountains, arriving at our destination, the entrance gates to PN Omar Torrijos. We arranged to pay our fee for the day, and set off down the road on foot. Our plan was to hike several of the trails within this national park, exploring different habitats throughout. We had loaded up on food and water for the day, and I was hoping to stay until after the sun set to search the wet trails within the forests for amphibians and reptiles. Afterwards, we would complete the long walk down the rock-strewn road back towards the town of El Copé.

Right from the beginning the birding was excellent! There was a little bit of wind, but the early morning sunshine and and cool temperatures enabled decent birding conditions. Our first Black-breasted Wood-Quails were calling from the distant hillsides, while a Thick-billed Seed-Finch was singing away in a patch of grass near the research station.

While walking uphill on a gravel road leading to a vista over the mountains, we paused for a few herps. One was this little lizard, a Loxopholis southi.

This next little lizard is an Anadia occelata, or Occelated Anadia. It is infrequently encountered in premontane forests, hiding in the heavy moss that grows on the limbs of trees. It is mostly arboreal, which likely accounts for why it isn't often observed.


Much of the day was spent hiking throughout the forest, hoping to encounter mixed feeding flocks. We were highly successful in this venture, finding several big flocks in the morning and a few additional ones in the afternoon. Lifers included two species of wren, several foliage-gleaners, an antwren, antbird and antshrike, Sulphur-rumped Flycatcher, White-crowned Manakin, Golden-Olive Woodpecker and Northern Schiffornis.

A good variety of tanagers were found, including some pretty fancy ones! Highlights included Emerald, Blue-and-Gold, Speckled, and Bay-headed. Carmiol's was a little less colorful, but equally new and exciting for us.

Unfortunately I was more focused on bird ID than photography during the few frenzied minutes when we were surrounded by a feeding flock and was unable to photograph the above mentioned species. Even when completely focused on birding, the percentage of birds that pass unidentified in these flocks is undoubtedly quite high. Unless it is a decent or prolonged look at a highly sought after species, I rarely go for my camera during these frenzies as there is simply too much going on!

During the long lulls between flocks, there are always other things to keep an eye out for, such as butterflies, cool insects, reptiles and amphibians. 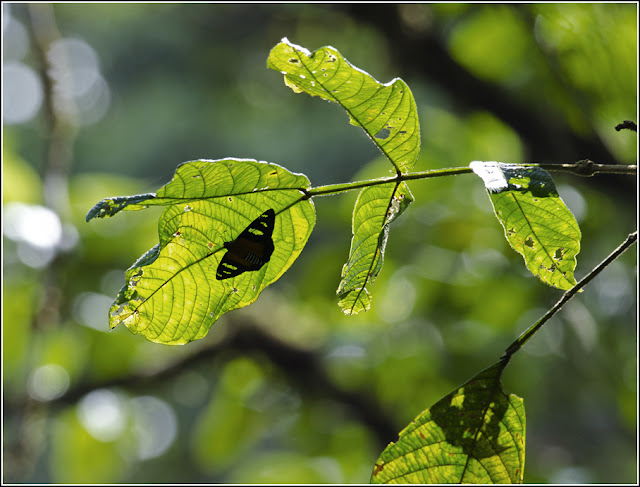 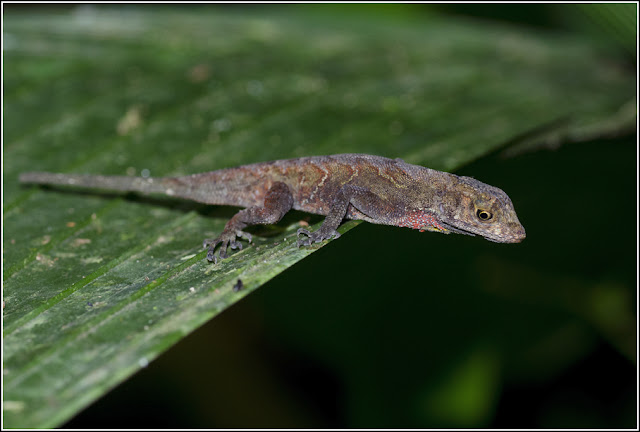 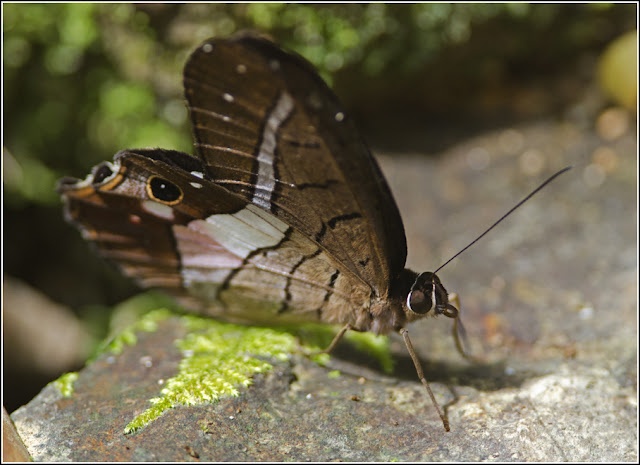 We had a brief siesta at the Center, where we relaxed for an hour or so.


Some birds were making the rounds at the forest edge below the deck, though these Hepatic Tanagers were the only ones I actually managed to photograph.

As the sun finally burned through the fog that had lingered in the morning, a few amievas came out to bask along the steps leading to the Center, providing excellent looks! I believe they are Holcosus festivus.

One of the highlight birds of the day was this great look at a pair of Purplish-backed Quail-Doves, a montane species restricted to Costa Rica and Panama. Quail-doves are quite shy as they walk quietly on the forest floor, proving to be difficult to come across unless you are patient and always on the look out. We lucked out with a total of six birds throughout the day. This is the best I could do for a "record" photo...


As the sun set on another productive day in a fantastic area, we began making plans for what to do next. I was quite eager to night-hike, while Steve decided to head down before it became too dark. Dave hung around for a little bit, but eventually headed back as well. One of the last new birds for the day was a calling Crested Guan right at dusk.

I lasted less than two hours on the trail before exhaustion and hunger did me in and I began the long walk back to town. The hiking was fairly slow and the forest was much drier than on my last visit here in 2010. That trip, I hiked the area with Jon Wedow for two nights (see here, and here).

This time I came across a few interesting frogs and insects, though I had no luck with any snakes. Even the frogs were in very low numbers - I think I only found about 8 individuals! I wonder how much of an effect the chydrid fungus has had on the frog populations of El Copé and area in recent years. Even in 2010 we easily had 15-20 frog species in our two nights here. 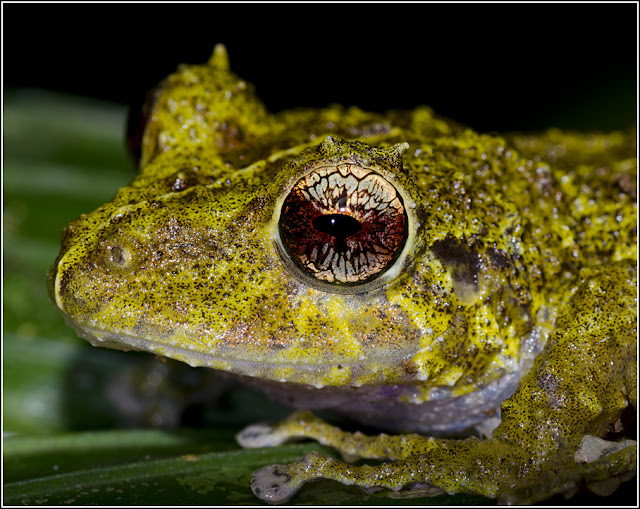 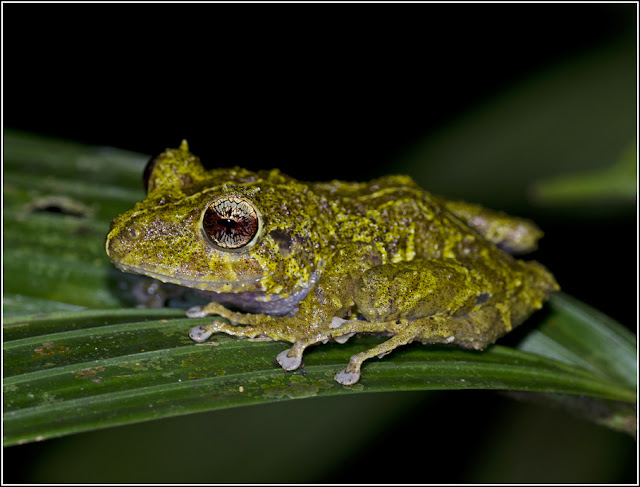 One of the species of trailside plants had interesting bristles on the leaves, producing a purplish sheen when viewed at a certain angle. 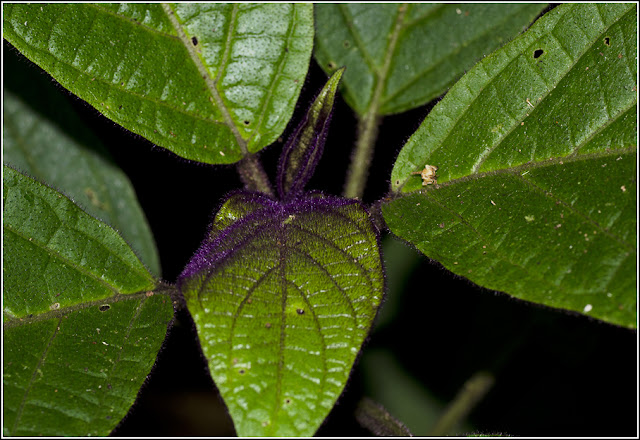 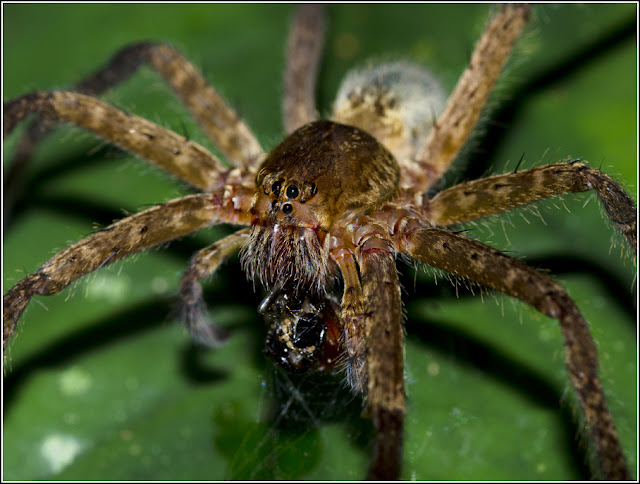 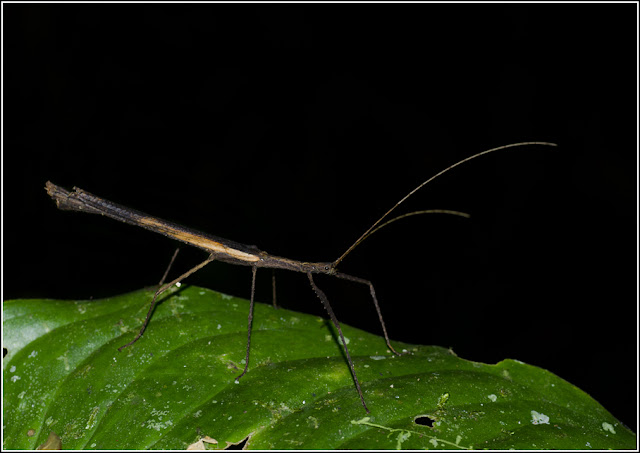 The trek back to El Copé wasn't too bad at all, and I made good time on the 6 or 7 km walk back to the town. At one point I heard a calling Lesser Nighthawk near a grassy area. This species ranges from the southwestern United States south through Central America, as well as throughout the northern half of South America. I'm sure that I will encounter many more of these in the future, but it was a nice end to a great day in the mountains. Twenty-four of the 80 bird species we saw today were life birds for me - a high ratio that will be difficult to match! El Copé was the furthest west that we would travel, as the next morning we were heading back east to Panama City and beyond. Our destination for the following night was the town of Torti in eastern Panama, where we were going to spend one night before continuing into the Darién, the most highly-anticipated part of the trip! Tomorrow we were hoping to bird around Lago Bayono, as well as within the dry forest here and further east.

Total bird species so far: 347
Posted by Josh Vandermeulen at 14:00