The rain let up close to midnight, though the air remained humid and fairly warm. We quickly found a few reptiles taking advantage.


This Ringed Snail-eating Snake (Sibon annulatus) was picked out crawling through some shrubbery. The white spots were noticeable from the trail. Just like that, we had our second snake!

Tink Frogs, of which we saw three species on the trip, are widely distributed in many forests throughout Panama. This is the Common Tink Frog (Diasporus diastema).

The highlight of the night, for me at least, was this large Craugastor tabasarae that we discovered in a stump away two feet off the ground. This species was only described in 2004 here in El Cope, and it can be apparently very tough to find.


Our third snake of the night, in the form of a Dipsas temporalis. Three snake species on the night!


After walking through the forest for a good four or five hours, we emerged and began the long walk back to the vehicle. Fortunately the wind had died down, the rain had abated, and the gravel road was mostly downhill. Several Marine Toads were seen!


We finally arrived at the vehicle and passed out for the night. I had a surprisingly good sleep, which may have been due to the cooler air temperature as the night wore on. By 8 or 9 in the morning we were up and getting ready to go. I walked a little bit up from where we had parked for the night and found this impressive Green Tree Anole (Norops biporcatus). It stook its ground and was easily photographed in the mid-morning sun (more of a haze).


The last herp of the El Cope section of the trip was this rain frog, whose ID I have forgotten. 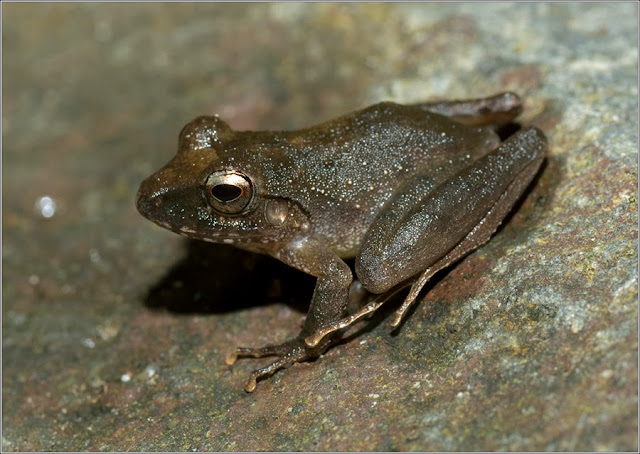 The El Cope portion of the trip, while quite short in duration, was well worth it as we saw a ton of quality herps.

By the time this is posted, I should have checked out El Cope for another two days on my current trip! Hopefully I'll have a real-time update on the blog soon!
Posted by Josh Vandermeulen at 11:00