I headed back to Guelph with Laura for one last weekend before she disappears to Nova Scotia for the rest of the summer. On the Saturday we headed up to Luther Marsh for a few hours in the afternoon.

I really like Luther - it is only an hour from Guelph, it has some cool herps, and it has a lot of birds that typically breed much farther north. We arrived around 1 PM to surprisingly cool weather (20 degrees C) and no mosquitoes!!! A nice change to Windsor for sure. Almost immediately we heard and saw Yellow-rumped Warblers, American Redstarts, and Common Yellowthroats.  A walk down the east side added Magnolia, Yellow, Pine, and a bold male Chestnut-sided Warbler who didn't appreciate us intruders. A Common Loon was on the lake, an American Bittern called from in some sedges, and 5 species of swallow caught insects. The highlight was near a small marsh - I heard a Sedge Wren sing from some tall grasses near the edge of the marsh several times. Never did get a look at him!

Laura and I had some fun catching Mink frogs in my "secret pond" - a place that is absolutely loaded with Mink Frogs. For this Southern Ontarioer, it was a treat to see Mink Frogs once again. They truly are a frog of the northern forest, as their southern limit of distribution (Luther Marsh) is the highest latitude of any North American Frog.

Sunday I slept in a bit, then checked out some other areas close to Guelph. At the Britton Tract near Campbellville, I had a few nice birds including 3+ singing Mourning Warblers, 2 Blue-winged Warblers, Black-billed Cuckoo, many Chestnut-sided, Redstarts, etc. I added a few new butterflies to my small but growing list - Northern Cloudywing, and Common Ringlet. On the way back to Guelph, a stop near Starkey's hill was quite productive. Just in the area around the parking lot and down the road, I saw many sparrows including 2 singing Clay-colored, 2 Grasshopper, and 5 Savannah. An Eastern Meadowlark was heard, a Purple Finch was seen, and many Bobolinks were around. 3 VERY territorial Blue-winged Warblers kept an eye on me and an Alder Flycatcher was singing. Not a bad afternoon near Guelph!
Posted by Anonymous at 17:58 No comments:

As promised here are a few butterfly photos from lately. A lot of new species have emerged in the past week or two and I've been trying to get decent photos of as many of them as I can.

I took a break for an hour with my coworker Shane on June 13th, so we ventured into the Spring-garden area to see what we could find. Along with Summer Azures, Northern Crescents, Black Swallowtails, and a few more of the regulars, we also saw:


And the highlight of the walk - 2 adult Eastern Foxsnakes. This female was pit-tagged by Ojibway in 2004. She was 66 grams then (just a baby) and was now over 450 grams. Considering that some of our Eastern Foxsnakes are close to 900 grams, this puts into perspective the longevity of these snakes.


A few more butterflies from this week:


The Baltimore Checkerspots are still common in the Tallgrass Prairie across from the Ojibway Nature Centre.

Some of the next few I am not too sure on the IDs. 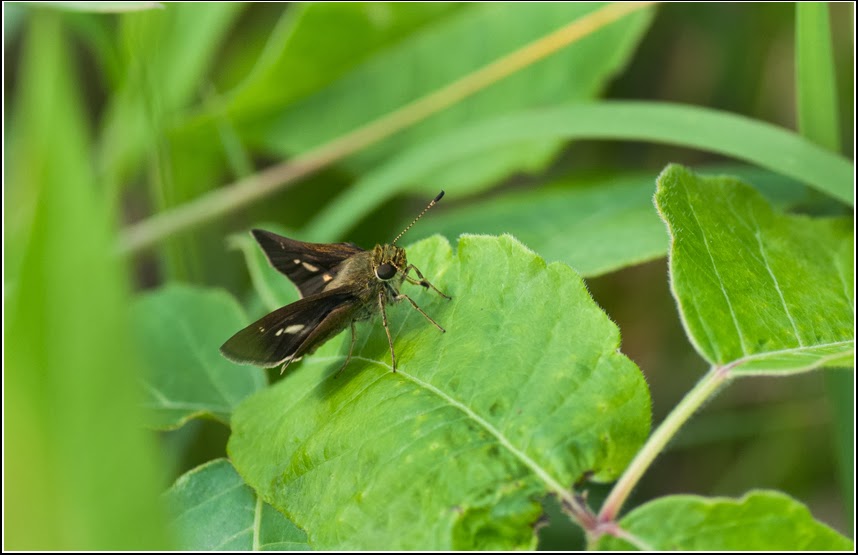 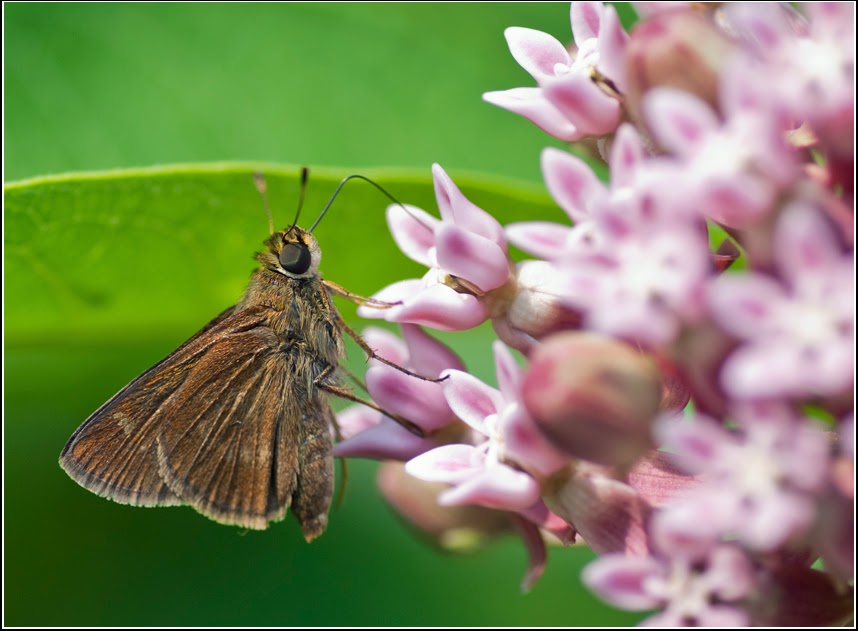 In other news, I finally ordered a Nikon 300mm f/4 AF-S lens. While not one of the huge telephotos that are 5,000-10,000$, this is still a very good quality lens for a fraction of the price. Image quality appears excellent with this lens - the only drawbacks being reach (its only 300 mm) and brightness (if it is used with a teleconverter). This is my first lens that isn't a macro or wide-angle lens, so I am pretty excited to test it out with some butterflies and birds...
Posted by Anonymous at 15:28 No comments:

Sorry I've been MIA, but work has been hectic as usual and I did not have internet this weekend (yes, weekend - first days off in 3 weeks!). I'll update tonight or tomorrow night after work. Lots of new Butterfly photos to come. As well I found a Hoary Edge in Windsor, but no photos as I didn't have my camera with me.

Also - I will be hopefully going on a Bobwhite hunt in the next few days! Todd Pepper and Rosann Kovalcik found a pair in Ojibway a few days ago - if these are indeed wild birds, they are the first that I have heard of in the Windsor area for quite some time! A link to their ontbirds post: http://ontbirds.ca/pipermail/birdalert_ontbirds.ca/Week-of-Mon-20110613/027729.html
The location is about 500 meters from my study site - yet another rarity found in my "backyard" this spring! (On top of Western Tanager and Yellow-crowned Night-Heron).
Posted by Anonymous at 10:48 1 comment:

I broke out of my usual birding/herping routine today and delved into something totally different - butterflies. I find that looking for butterflies is a lot like birding - they fly (obviously), they each are found in specific microhabitats, some migrate long distances, etc. So Dan Riley and I headed out to Ojibway prairie for a few hours this evening. Some highlights:

This is some sort of Duskywing - our best guess is Dreamy Duskywing. 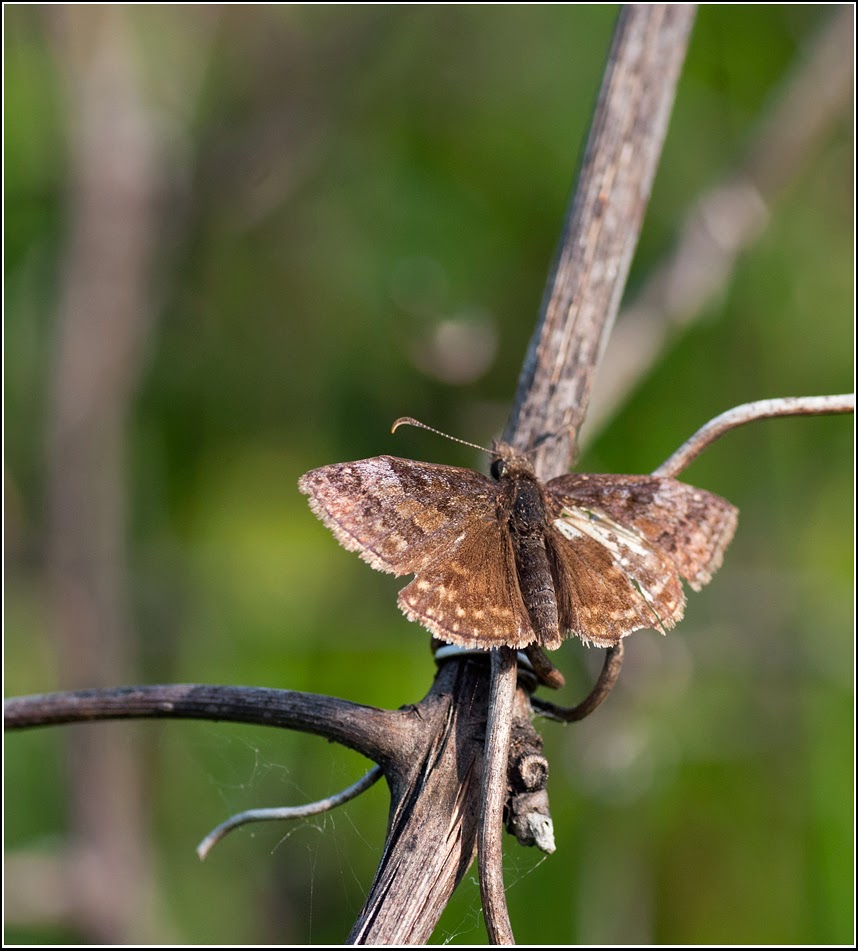 The majority of the butterflies we found were skippers - European, Least, and Hobomok. I think that this is a Hobomok: 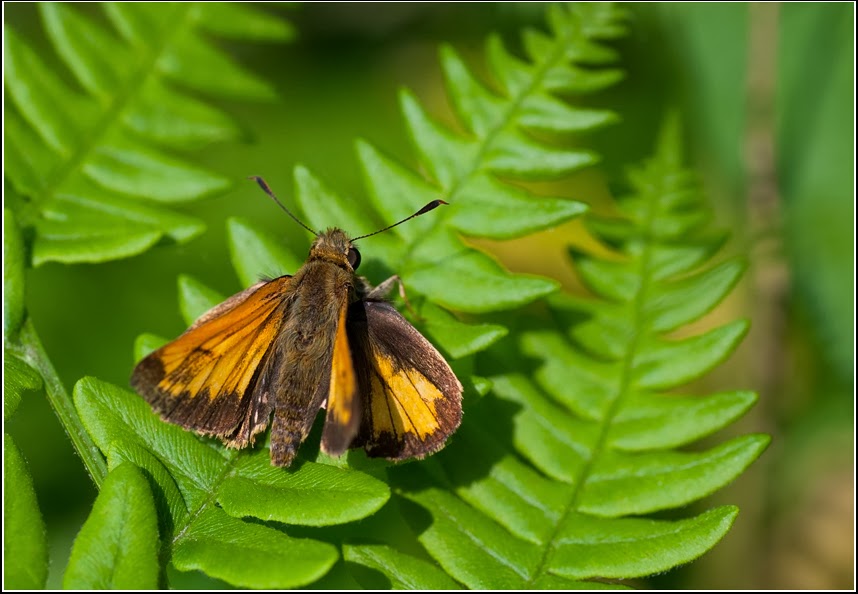 The regular birds were present, including Field Sparrows, Baltimore and Orchard Orioles, Eastern Towhees, etc. We found a few Bluebirds and heard a Pheasant as well. No cuckoos this time.

While walking through the field, we stumbled upon this Baltimore Checkerspot. It didn't take long to locate about 10 more - maybe it will be a good year for a flight of them. 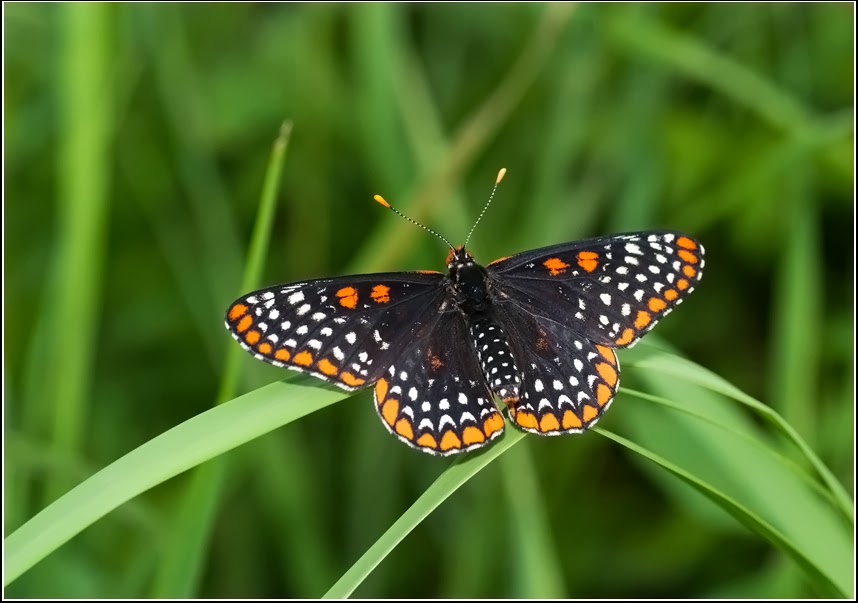 What the hell is this skipper? 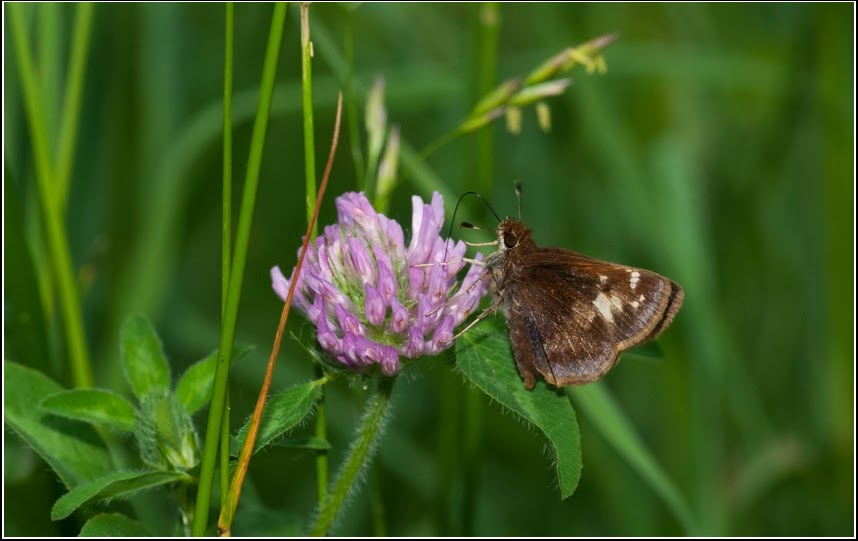 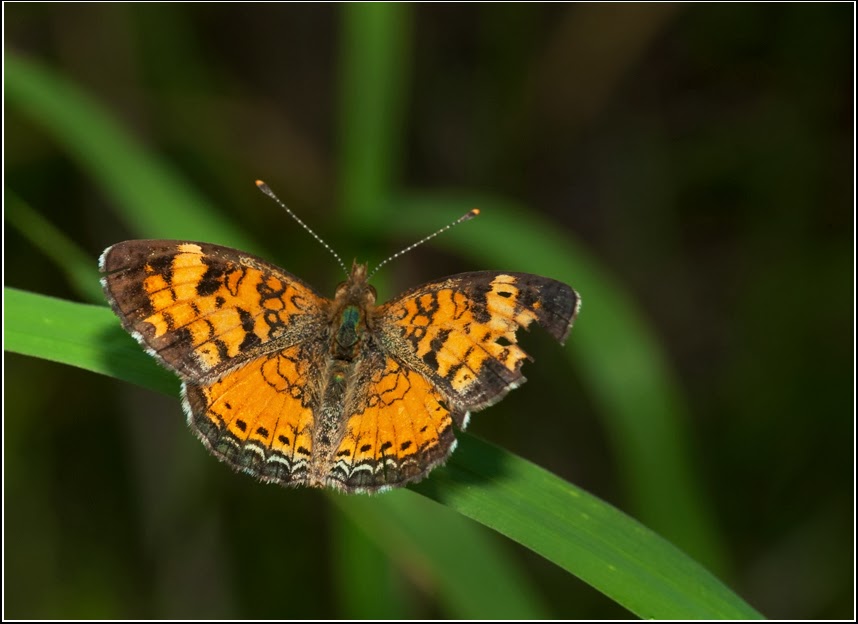 And finally, a Silver-spotted Skipper before the rain came down. Not a bad hour of butterflying by a couple of idiots. 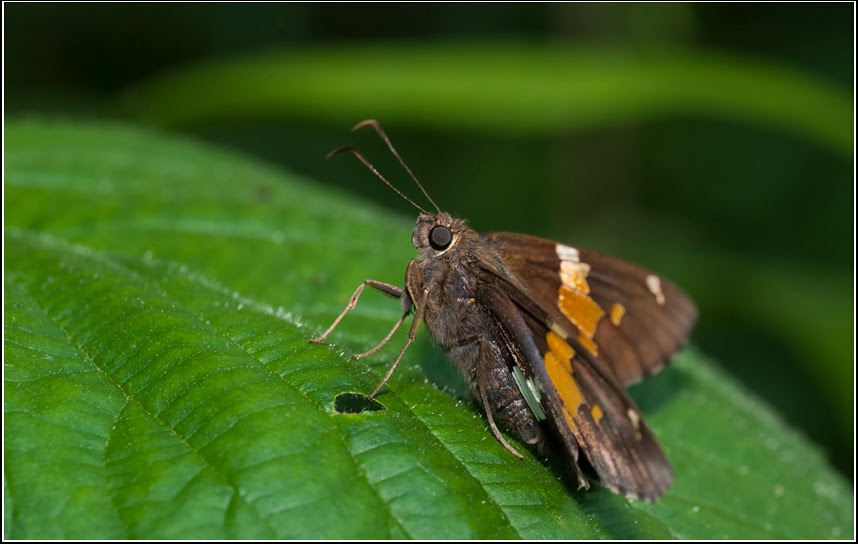 The snakes of Ontario -part 1


The purpose of this post is exactly how the title says: I will showcase every species of snake that is currently found in Ontario. Especially before I got into birds, herps were my main interest and I have found and photographed each of the 15 species native to Ontario. This number is often surprising to most people - this is the Great White North after all! Without further ado, part one of the post...

This is the most common snake in Ontario, with records ranging all the way up to James Bay. I am pretty sure that just about any habitat can support them, from grassy fields to woodlands to alvars to parking lots. I once even found one in the grassy area of a highway interchange, surrounded by roads.


My records indicate that I have seen 1696 Eastern garter snakes in Ontario since I started keeping track in 2007.


The melanistic form is quite common in some locations that are adjacent to Lake Erie or Lake Ontario. This genetic strain proliferates in relatively closed populations of the Leslie street spit, Long Point, Point Pelee, and Pelee Island. The Pelee Island population contains about 1/3 melanistic individuals.

Another super common snake in Ontario, but rarely seen due to their small size and brownish colorations. Biggest ID point is that they look like a worm. I like the little buggers though!

Redbelly snakes are the cousins of the much more common Brown Snakes, and are typically found in edge habitats. They also have a large range and can be found as far north as Lake Superior. This is the smallest species of snake in Ontario, and most adults are about 10 inches long. The babies, on the other hand, weigh less than a gram.

This fine specimen was found under a board in the Norfolk area, an area with a very high diversity of snakes. She looks like she is about to drop about 15 babies. (Within one km of where this snake was found, my friend Jon and I have seen E. Garter, Northern Watersnake, Northern Redbelly, Brown, Eastern Fox, Eastern Hognose, Northern Ringneck, Smooth Green, and Eastern Milksnakes).


I don't find huge numbers of them, but in some areas they can be locally abundant. In our study site in Windsor, about 0.5 percent of the snakes we find are Redbelly snakes, to give you an idea of how sparse they can be in areas.


Definitely a pretty species, and underrated.

Ribbonsnakes are closely related to Gartersnakes but are much more specific in their habitat requirements. I tend to find them in marshy fens/marshes that are immediately adjacent to hilly deciduous woodland in Southern Ontario. In central Ontario, any wetland that is close to an open area seems to do!


As obvious in the above photo, the white crescent anterior to the eye is diagnostic of this species. Also note the slender head, as well as the brown coloration just ventral of the yellowish stripe on the snake's side.

I am fortunate to have a large population of ribbonsnakes quite close to my parent's house in Cambridge, which allowed many opportunities to study this species while I was growing up. Here area  few of my favorite photos from over the years:


One last shot of my favorite snake species in Ontario, feeding on their favorite prey item - frogs.


Stay tuned - the next post will cover Northern Watersnake, Lake Erie Watersnake (including some very strange individuals), and Queen Snake.
Posted by Anonymous at 21:31 3 comments:

Rarities at my doorstep

I've been spending anywhere from 5 to 15 hours a day hiking around my study site in Windsor, and while I have had some good birds to show for it (http://joshvandermeulen.blogspot.com/2011/05/some-highlights-from-windsor.html) I haven't found anything super rare. 2 weeks ago, Murray Shields found a Western Tanager in Ojibway. I was there the same day shortly after with Laura, but we decided to hike a different trail. Word got out about the tanager later that afternoon, but Tom Preney and I couldn't make it appear.
A few hours ago, Karen Morgan posted a Yellow-crowned Night Heron from Malden Park, which is literally 200 meters from my study site. Gah! So guess where I will be before work tomorrow morning!
Posted by Anonymous at 00:17 No comments: