Posted by Josh Vandermeulen at 11:32 No comments:

I've been a little M.I.A. over the last month or so, but for good reasons. On September 9th Laura and I got married, and a few weekends later we flew to Nova Scotia for the "second wedding"; really just a big party for everyone from Laura's side who couldn't make it to Ontario. And then to top it off I have been madly planning and studying for my trip to Borneo.

Fast forward a few weeks, and here I am, in Borneo - a place I've always dreamed of visiting! I landed on the evening of October 2 in Kota Kinabalu, located in the western part of Sabah Province, on the Malaysian side of Borneo. I picked up my rental car and drove straight to the famous Mt. Kinabalu which is where I have been stationed for the last three nights.

Borneo has been absolutely incredible to say the least and I've enjoyed marveling at the magnificent trees, searching out many of the rare and unusual bird species, and coming upon unexpected surprises around each and every bend (today I found a Rafflesia flower! Not in bloom though...). Driving on the left has been a lot of fun, especially when jostling with trucks up windy mountain roads!

I don't have a lot of time to write many details, as bedtime beckons - those 4:30 wakeup calls come quickly - so I'll leave with one highlight from today. 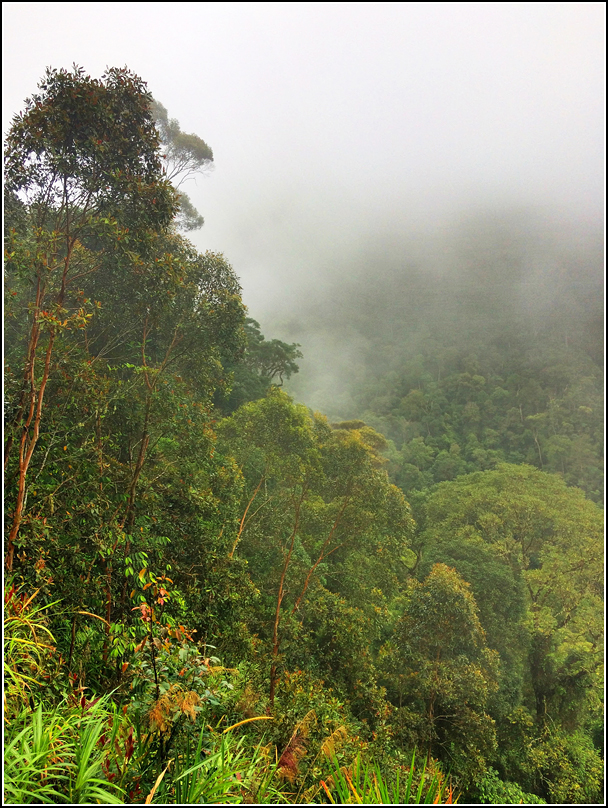 My plan for today was to park at the Poring Hot Springs and hike up to the Langanan waterfall, one of the largest in Sabah province. This trail is well known among visiting birders due to its large bird list, including several highly sought after species such as Hose's Broadbill, Bornean Banded Pitta and Blue-banded Pitta. The Blue-banded was one of my most wanted birds of the trip; perhaps because its stunning beauty adorns the cover of one of my Borneo field guides, so it was one of the first Borneo birds I became familiar with when researching the island. This scarce endemic is occasionally found on the Langanan waterfall trail but I was not holding my breath, especially since the two semi-reliable locations along the trail proved fruitless to me on my walk to the waterfall.

I completed the long and arduous hike up to the waterfall, stopping frequently to scan for birds, of which there were many vocalizing from the cathedral like trees, but few low enough to identify visually. At one point I stopped at a particularly scenic bend in the trail, and paused for 10 or 15 minutes to scan the treetops and record the vocalizations of some of the barbets that were calling incessantly. Not expecting much, I played a snippet of the song of Blue-banded Pitta - a moderately long, mournful whistle - and as expected, there was no response. I resumed recording the birdsong, focusing on a Black-and-yellow Broadbill that had fired up. Suddenly I heard a peculiar whistle, not far off the trail...it was a Blue-banded Pitta! I kept the recording going as the pitta sang two or three other times - I couldn't believe my luck.

Blue-banded Pittas can be quite shy so I was not expecting to see this bird. Just in case, I set my camera to "pitta mode", cranking the ISO up to 4000 and setting the aperture to be wide open, to let in as much light as possible in the dark understorey. Suddenly, there it was - a fiery red blob hopped into view, staring right at me! I slowly brought up my camera, cracking off a few dozen frames through the foliage, before lowering it and bringing my binoculars up to take in its beauty. For the next 30 seconds or so I stared at the pitta as he began flipping over some leaves, presumably looking for some morsel underneath. A few hops later and he was out of sight, while I stood there with my jaw open (probably). I couldn't believe the sequence of events! 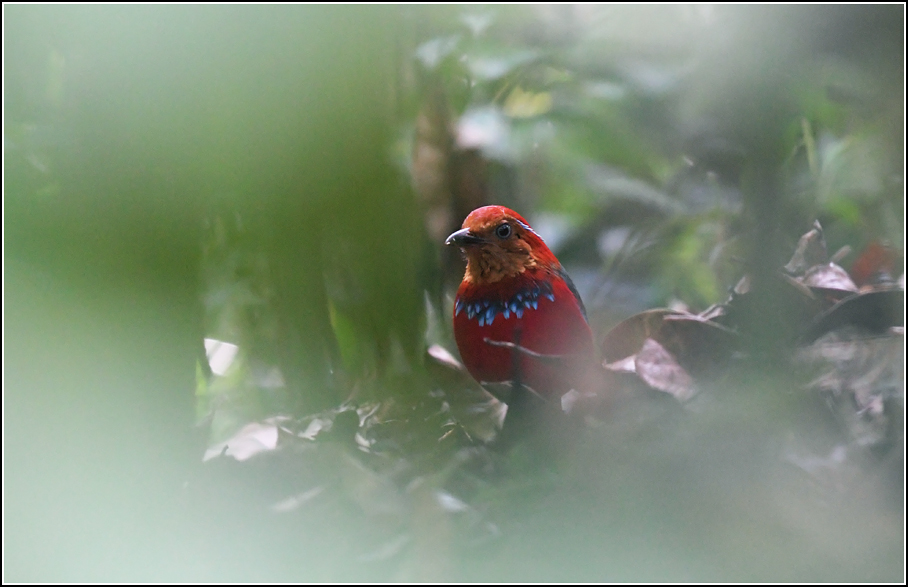 Tomorrow I will be heading back into Kinabalu Park with a dwindling "hit list" as it has been a successful few days. I have yet to catch up with an Everett's Thrush, Mountain Wren-Babbler, Whitehead's Trogon or Bare-headed Laughingthrush; maybe with a bit of luck I will stumble upon one or two of those tomorrow! From there I will be spending a day in the Crocker Range to the south, followed by a night near the Klias Peatswamp reserve, before returning my rental car to the airport and flying across Sabah to meet up with my group.
Posted by Josh Vandermeulen at 09:55 3 comments: