Our fortnight with the rental car was nearing its conclusion but we still had two nights remaining. We drove south towards Bogotá and veered west, aiming for the town of La Vega. Located in the western foothills of the eastern cordillera, this particular part of Colombia has a mixture of Andean species as well as lowland ones associated with the Magdelena Valley. We had immensely enjoyed our time in the higher elevations but now we were ready for a change of scenery and an uptick in species diversity.

We found a gorgeous property on AirBnB located about 30 minutes south of town and up in the hills, surrounded by nature. Our hosts, Adriana and Juan, were lovely people. We had fun practicing our Spanish with them (though they knew enough English to help us out if we got stuck) and they cooked some excellent meals for us. The birding and mothing on their property was great! A trail headed down to the nearby river, perfect for cooling off after a long day in the field. We were guided by their dogs, Mike and Muñeca, who showed us the best places to jump in to the river.

We watched for birds on a few occasions from the top of the hillside. The panoramic views from there were excellent for scanning for birds, while the odd flock passed through the trees below us.


Since we were birding in a new habitat for the first time we encountered many species that were different than the previous weeks. A pair of endemic Velvet-fronted Euphonias provided eye-level views. We also logged Cinereous Becard, White-bellied Antbird, Apical Flycatcher, Indigo-capped Hummingbird and many tanagers from this vantage point.

We set up our moth sheet during both nights. While we did not find any of the big fancy ones, there were enough interesting moths to keep us occupied. 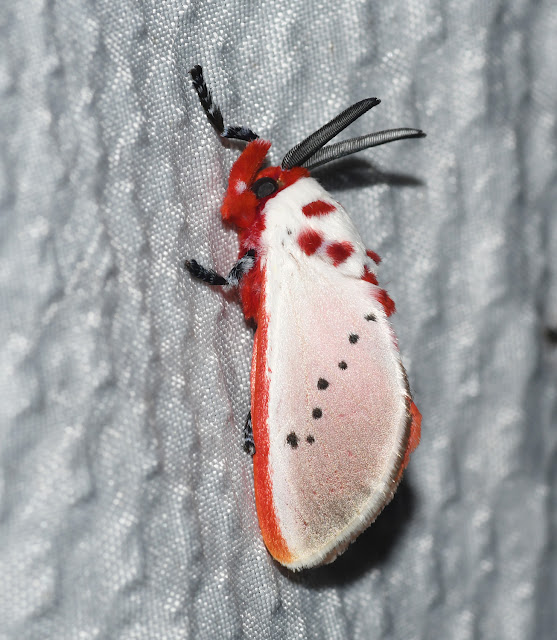 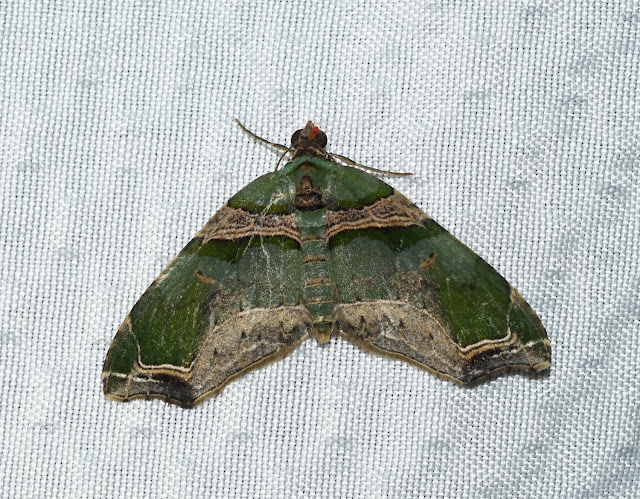 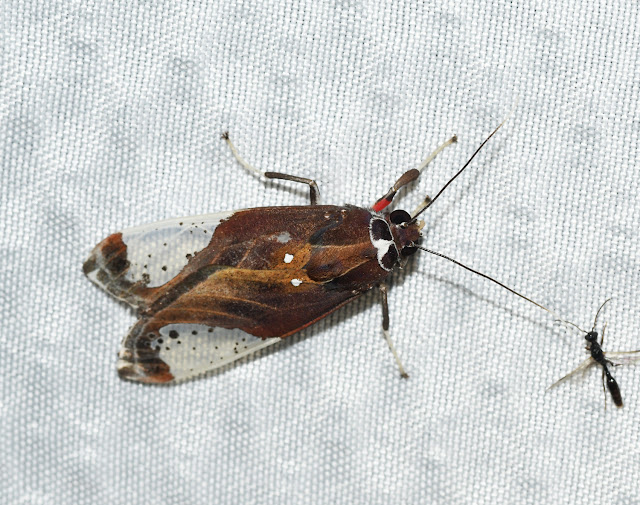 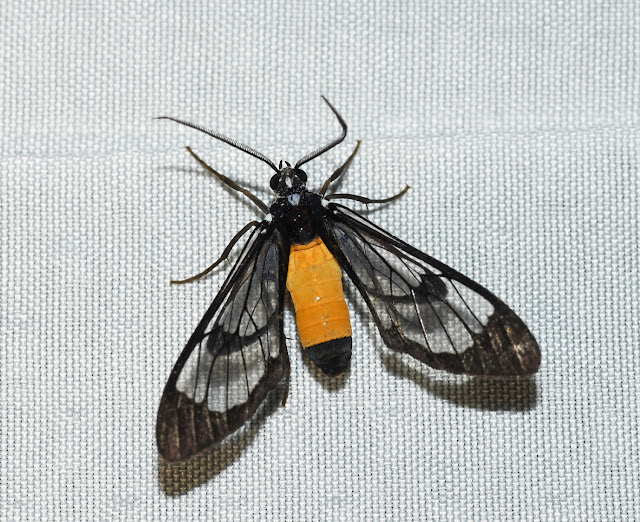 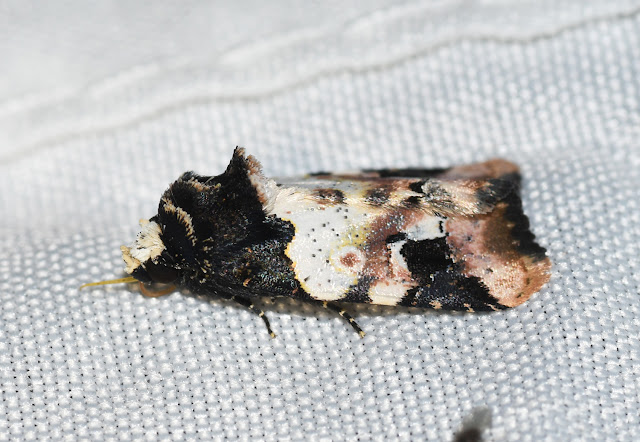 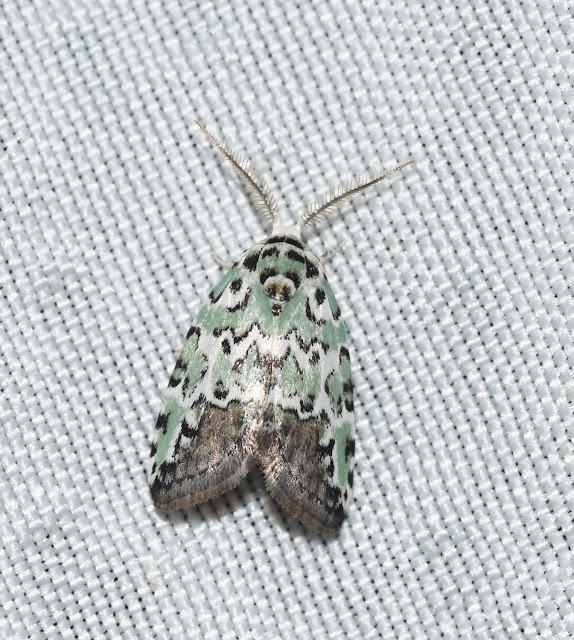 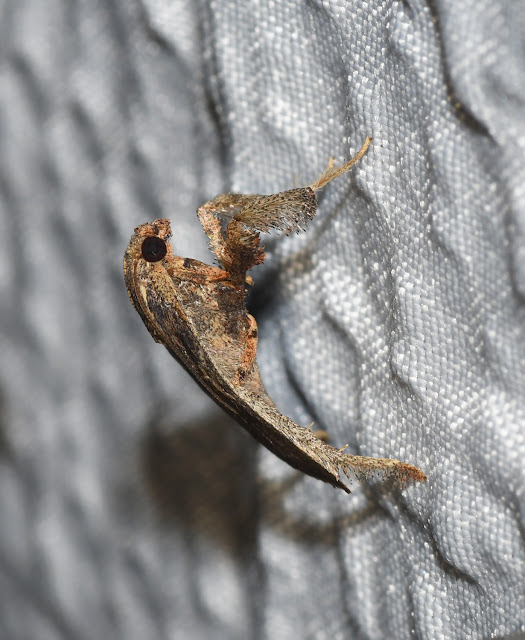 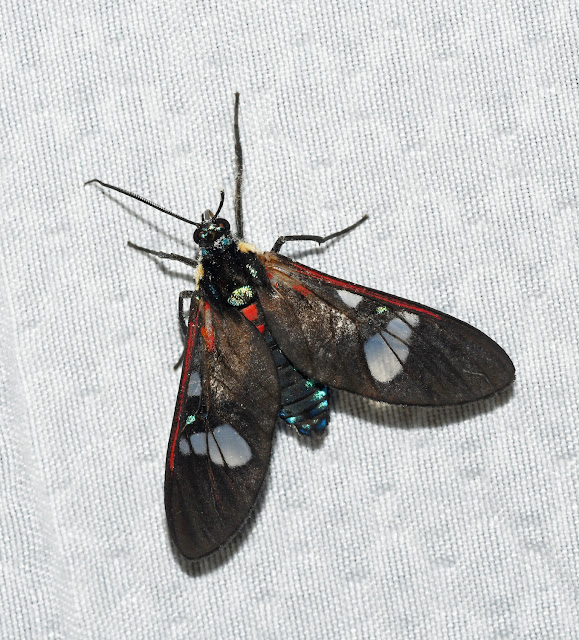 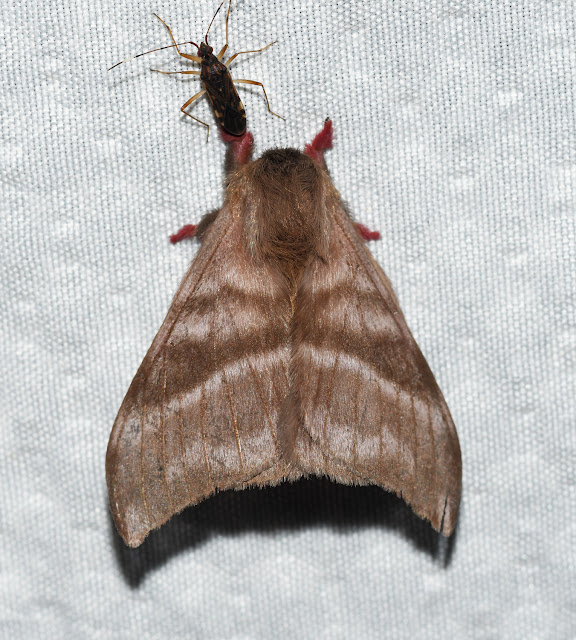 The trail heading down to the river was productive after dark as well. Unfortunately, we were unable to find any reptiles but the invertebrates were more than enough to interest us. 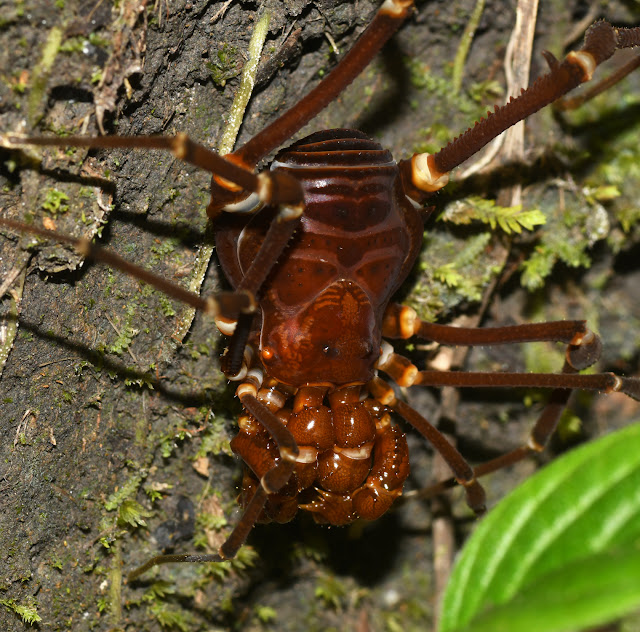 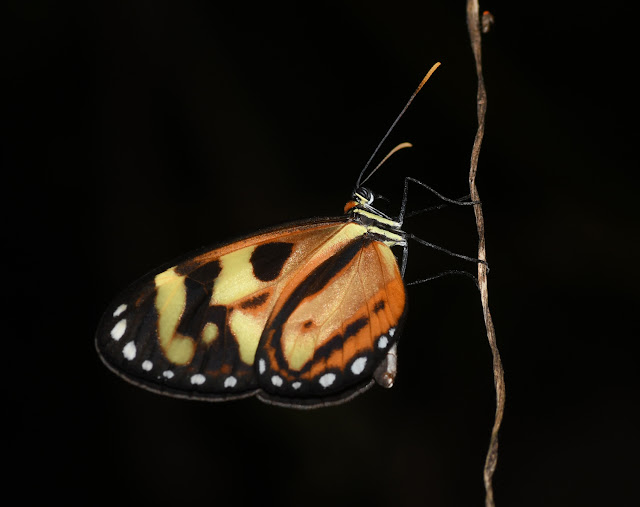 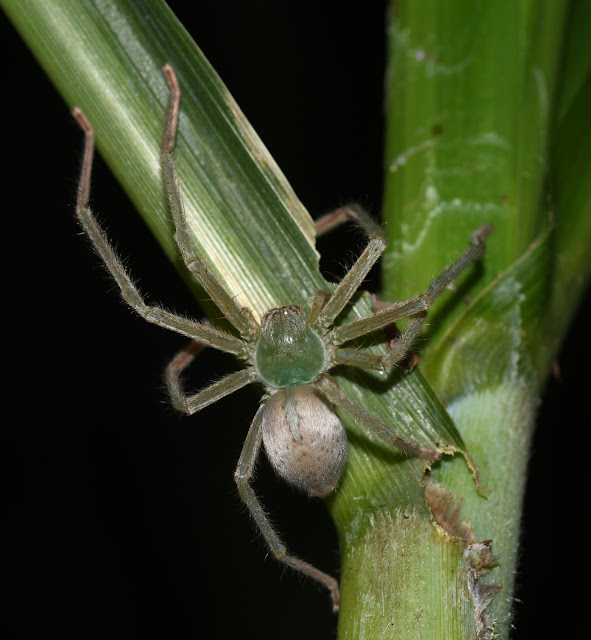 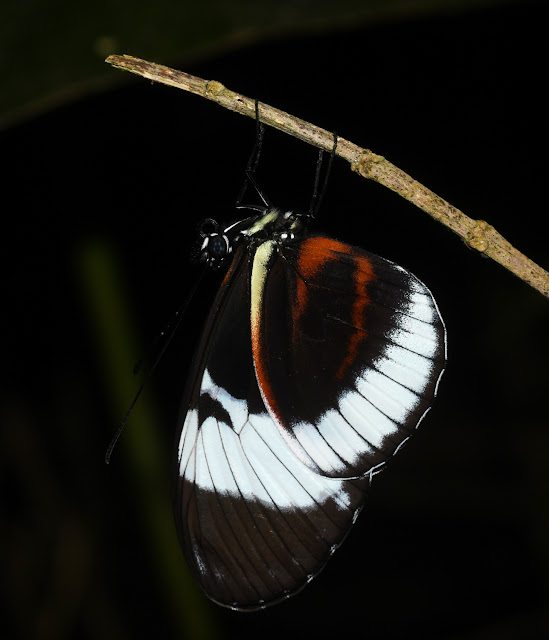 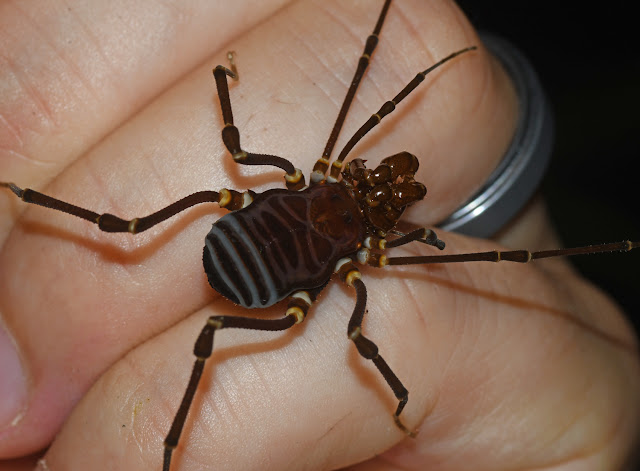 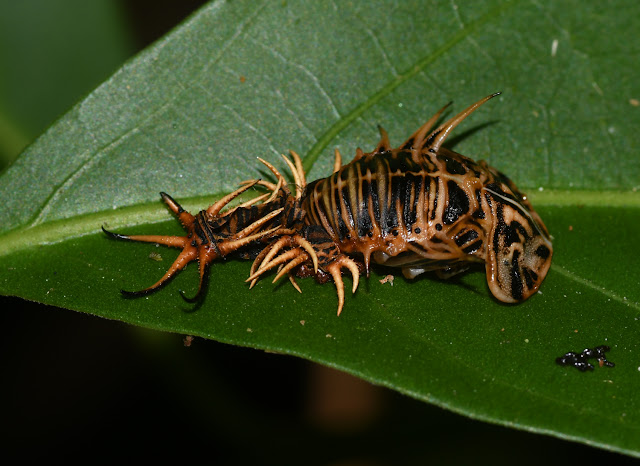 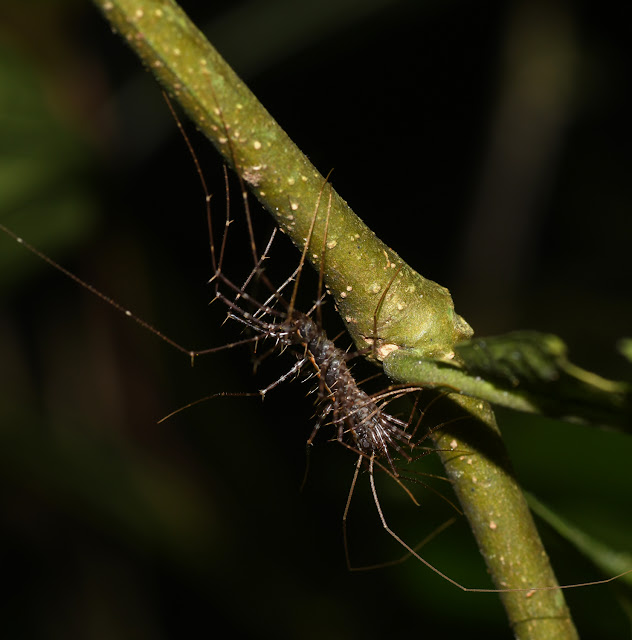 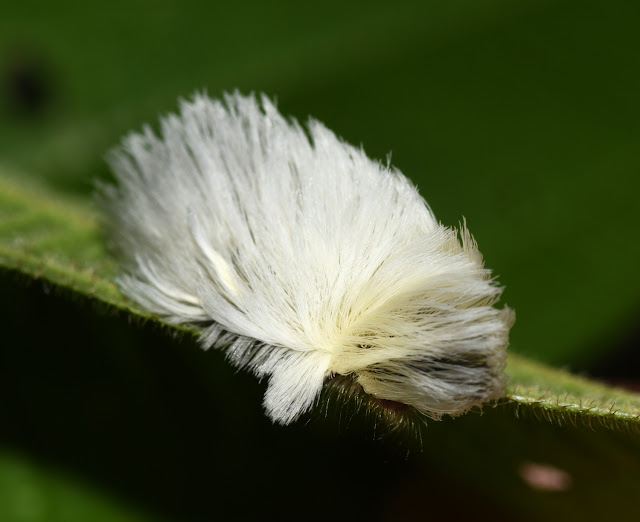 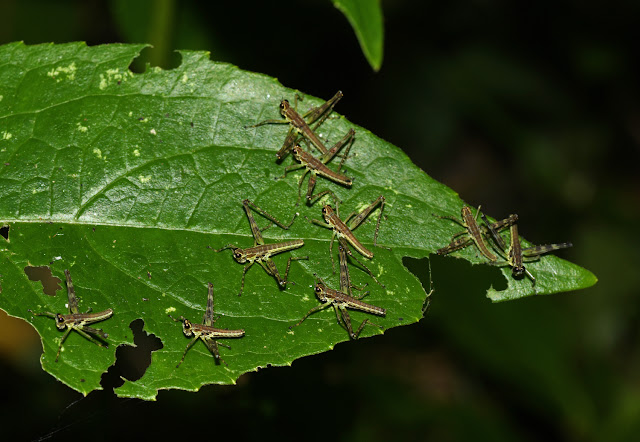 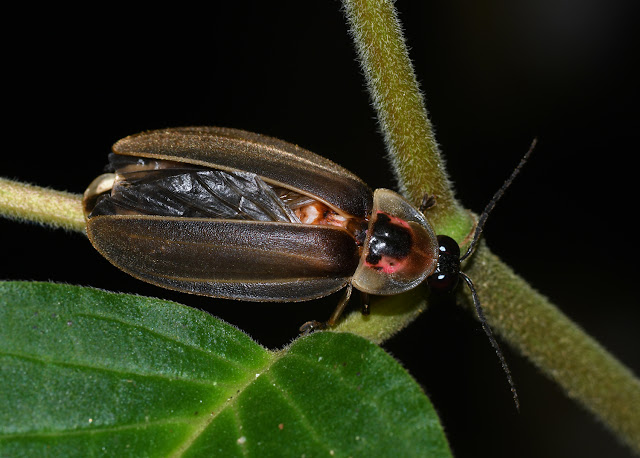 Laguna El Tabacal is located about 45 minutes from the location of our AirBnB. This small lake is surrounded by steep hillsides and scrubby forests and provides habitat for well over 350 species of birds, many of which I had not yet encountered this year. It happens to be a popular destination for local Colombians but we planned on being there early before the crowds grew too large.

There were four potential “lifers” that I could pick up at Laguna el Tabacal or elsewhere in the La Vega area. They were Black-headed Brushfinch, Rufous-naped Greenlet, Blue-lored Antbird and the endemic Velvet-fronted Euphonia. The entrance gate did not open until 8 AM, meaning we would miss the dawn chorus. At 8:01 we paid our entrance fee (about 2 Canadian dollars each) and entered.

We found a quiet forest trail that was devoid of people at this (relatively) early hour. It was quite birdy and we enjoyed species like Olivaceous Piculet, Ruddy Ground-Dove, Gray-cheeked Thrush (amongst hordes of Swainson’s Thrushes), Orange-billed Sparrow and Speckle-breasted Wren. Rosy Thrush-Tanager, Jet Antbird and Red-billed Scythebill were tallied as heard-only species, unfortunately.

As we approached the late morning I was stuck at 1 for 4 of my target species. Finally, I came across a singing Blue-lored Antbird at a part of the trail higher up in the hills, but the brushfinch and greenlet remained unaccounted for. That’s birding!

The crowds of people began filtering in and that was our cue to leave. It had been an agreeable morning and we were happy with our decision to visit Laguna El Tabacal.

The next morning was our very last in La Vega as the car was due back at the airport. We elected to take it easy and do some casual birding at the AirBnB property, picking up our first Red-billed Emerald and Violet-bellied Hummingbird of the year. By 10 AM we hit the road.

I had given up hope on my two remaining targets, the Black-headed Brushfinch and Rufous-naped Greenlet, but kept the window of the car open as we navigated the gravel road, just in case. And then I heard it – the distinctive song of the Rufous-naped Greenlet. I slammed on the brakes and ran back with my binoculars – there he was! Fortunately, the little quartet of greenlets hung around long enough for some photos. It was a fitting way to end our two-week adventure with the rental car!

We returned the vehicle to Bogotá without any issues and made our way to the hotel to prep for our upcoming trips with Quest Nature Tours. My year list was sitting at 475 bird species.
Posted by Josh Vandermeulen at 11:00 No comments:

Laura and I changed course from our original itinerary only two hours after leaving Duitama. Our plan had been to visit the Soatá area for a night – home to the Mountain Grackle but also two other endemic species (the Chestnut-bellied Hummingbird and Niceforo’s Wren). But we were having a hard time finding a place to stay. Both AirBnB properties we inquired with that would be suitable turned us down and we could not find anything else online. And on top of that, the drive would be a lot longer than we had originally anticipated due to the winding roads with frequent construction. And so, we changed course and turned the car south, aiming for the town of Arcabuco. Besides, I had already seen the Mountain Grackle and I would hopefully have a chance to search for the other two target species later on at the Cerulean Warbler Reserve.

We stayed at a property called Rogitama Birding. The property had formerly consisted of pasture fields but in 1982 the family which purchased the property began a decades long conservation initiative that is still ongoing. They replaced a lot of the soil, introduced earthworms and planted a wide range of tree species. While still surrounded by pastures, the property is lush and beautiful with many native species thriving in this environment. Among birders, this property is well-known as one of the easiest locations to see the range-restricted and Endangered Black Inca.

We enjoyed two nights at Rogitama. It was a perfect base to explore the surrounding areas, with trails, a beautiful wrap-around porch containing over a dozen hummingbird feeders, and Colombian hospitality from the family that owns the property. The price was right as well.

We encountered about a dozen hummingbird species on the property. Top of the list was, of course, the Black Inca. But we also viewed Lazuline Sabrewing and Short-tailed Emerald here for the first time. I think the Lazuline Sabrewings were my favourite! What a stunning hummingbird.

Birding was a little slower in the forest away from the lodge but with patience we found a few things of interest. Territorial Black Incas and Lazuline Sabrewings topped the list. But we also enjoyed Moustached Brushfinches, Pale-bellied Tapaculos, Yellow-backed Orioles and a bunch of tanagers and warblers.

Most people who visit this part of Colombia for “nature reasons” check out Iguaque National Park. However, the entrance fees for foreigners were prohibitive (over 20$ pp to enter) and so we made alternative arrangements. I had heard about a trail known as Sendero El Peligro from Dorian Anderson’s excellent blog/site guide. Located about 10 minutes from Rogitama, this trail cuts through a swath of different habitats, but mostly, montane forest. Laura and I visited for a full day and came away very impressed! Please check out Dorian’s page for information on directions, maps, etc.

Portions of the trail passed over bedrock. Along with the shrubby vegetation and cool morning temperatures, it brought back memories of hiking in the Canadian Shield region. The only thing missing were the Massasaugas.

The trail was in good condition and while there were a few elevation changes, for the most part it was relatively flat. This meant that more time could be focused on wildlife-finding and not on watching our feet. It is the dry season at the moment and we managed just fine with our hiking boots, but in the wet season rubber boots may be mandatory for certain sections. Our favourite part about the hike (other than the gorgeous scenery and excellent birding) was that we did not encounter a single human all day long! Bliss.

Sendero El Peligro is located at a fairly high elevation and so the bird life was not nearly as diverse as lower altitudes. But we had an awesome day of birding with perfect weather. Despite not arriving until close to 7:30 AM we still racked up 54 species.

Golden-bellied Starfrontlets were occasionally noted. To think I made sure that we visited Chicaque near Bogotá, when the hummingbird is just as easy here! We also noted Glowing Puffleg, Short-tailed Emerald and Lazuline Sabrewing among our eight hummingbird species.

Mixed flocks were frequent, keeping us on our toes. We enjoyed a nice selection of birds in these flocks including Cerulean Warbler, Scarlet-bellied Mountain-Tanager, Golden-fronted Redstart, Brown-capped Vireo, Mountain Elaenia, Montane Foliage-Gleaner, Blue-and-black Tanager and Bluish Flowerpiercer. We frequently heard Chestnut-crowned Antpittas, Blackish Tapaculos and Pale-bellied Tapaculos. A little flock of Yellow-breasted Brushfinches appeared and we had flyover Andean Siskins, White-collared Swifts and Chestnut-collared Swifts. We had great views of many species and it was certainly an enjoyable day out!

The sun was out for most of the day which powered up many insects. The butterfly show was never ending and gave us something to marvel at whenever the birding was slow.

One of the more spectacular butterflies was Morpho sulkowskyi, a species that we had noted a few previous times when hiking at this elevation in the Colombian Andes. The underside of the wings is a pale yellow but the upperside is spectacular – an iridescent, powdery blue.

Later on, we stumbled across an individual that had seen better days. But this provided us with a great opportunity to see the colouration and iridescence up close. Incredible!


We enjoyed our time at Rogitama and along Sendero El Peligro. The Boyacá province in Colombia is filled with many hidden gems that are not on the “typical” birding circuit, and these places are two of them!
Posted by Josh Vandermeulen at 15:18 No comments: