Over the Labour Day weekend Laura and I ventured down to Essex County in the far southwestern corner of our province. The plan for the weekend was two-fold (well OK, three-fold). First, we wanted to catch up with several friends that reside in that part of the province as it had been much too long since we had seen some of them. Second, we wanted to get a little bit of hiking and exploring in. And third, I was hoping to catch up with the long-staying Purple Gallinule that was summering near Kingsville.

Laura had to work on Saturday but by mid-afternoon my car was making good time on the QEW. Almost four hours later we pulled into the parking lot at the John R. Park homestead, the location where the gallinule had been seen. That evening we would be spending the night with a good friend of ours from university who lives in Amherstburg, and the gallinule was conveniently located only a fifteen minute drive from Amherstburg.

A band of heavy thunderstorms passed through just before our arrival in Kingsville. The Purple Gallinule was almost too easy as after a fifteen minute vigil it popped out of the vegetation!


Purple Gallinule is very rare in Ontario, with only 20 accepted records prior to 2018. The majority of records pertain to juvenile birds which are more prone to fly off course during the autumn, while most spring records are of adults. I had seen one Purple Gallinule in Ontario (the juvenile that was at Port Weller in October, 2011), but it was a new one for Laura. We enjoyed watching the bird plucking snails out of the muddy edge of the wetland before ducking back into the dense vegetation.

The following day we slept in and hung out some more in Amherstburg, then visited a friend in Leamington. It was past 12 PM when we finally entered the park and the temperatures had soared above 30 degrees Celsius with high humidity but also a strong breeze. During the heat of the day we enjoyed a few hours on the beach with the Renaud family. Later in the afternoon we rented a canoe from the Marsh Boardwalk store to paddle in the marsh.


Kory Renaud had found a Marbled Godwit and Willet in the marsh earlier in the day so of course we were hoping to cross path with them. Shorebirds in the marsh are often quite confiding when one approaches them by boat, making it very easy to obtain amazing photos. Unfortunately for us, both the Marbled Godwit and Willet were quite skittish. The godwit was only seen in flight over the marsh for about five seconds, while the Willet also was only seen in flight, high in the sky. We would have likely missed the Willet if it was not calling.


But while the big dudes played hard to get, at least some of the smaller shorebirds cooperated nicely. Watching and listening to a group of juvenile Short-billed Dowitchers was a big highlight for us, as they carried on with their business despite our canoe resting on the mudflat just meters from them. Semipalmated Plovers were also very tame and were perhaps the highlight for Laura.


Of course there is so much life in the Point Pelee marsh beyond the birds. I find that Common Map Turtles are the most frequently encountered turtle in the marsh and it was no different this time. A relatively young one provided an excellent photo subject.


Damselflies were downright abundant, with the majority being Eastern Forktails. I kept an eye out for Lilypad Forktail as the only known population in Canada resides in the Point Pelee marsh but it was not to be. Orange Bluets were another one of the common species.


A young Bald Eagle was seen on several occasions, even sharing a mudflat with some of the smaller shorebirds. I guess they realized that the eagle's reflexes were not quick enough to grab them at such a short distance, or perhaps they figured that the eagle would not bother with them. Eventually the eagle took to the air and flew right over our heads.


That evening, Jeremy Bensette was kind enough to set up his moth sheet for us, while we also paid a visit to Mike Matheson's sheet later on. Moths have become a big interest for Laura and I but unfortunately our house in Niagara Falls is not conducive to setting up a sheet. Experiences like this are my few chances to do intensive moth study so I try to take advantage whenever I am in the Point Pelee area. Below are a few of the species, lepidopteran or otherwise, from Sunday evening.

I believe the species below is a Texas Mocis, which is a rare immigrant from the southern United States that sometimes appears far to the north in the autumn.


This was easily a highlight at Mike's moth sheet. A Northern Mole Cricket, the first I had ever seen. It was incredible how quickly it was able to bury into the dirt, propelling itself with its massive forelimbs.


The following morning Laura and I headed back into Point Pelee National Park for a nice hike before heading back to Niagara. Again, the day was hot and sticky which really put a damper on bird activity. We still had a great time with numerous sightings, including one particularly exciting find.

Recently I have started to pay more attention to damselflies. This one is a Fragile Forktail - not a particularly uncommon one, but the first one that I have photographed. They shone like jewels as they flew in and out of sunny patches along the Shuster Trail.


Azure taxonomy is in a state of flux right now, so I will leave this one as Celastrina sp. for now!


Hackberry Emperor is primarily a Carolinian species in Ontario, due to the preference of the larvae for feeding on, you guessed it, Common Hackberry. That just happens to be the most abundant tree at Point Pelee, and despite the high temperatures, we managed to find a couple of Hackberry Emperors. If a butterfly lands on you at Point Pelee, it is most likely a member of this species.


Of course the biggest highlight as I have detailed in a previous post was the larval Curve-lined Owlet, a new species for Canada, that Laura spotted as it fed on Greenbrier.


Speaking of Laura's sharp eyes, she also picked out this Eastern Gartersnake quietly basking in a brush pile. There is a reason I keep that girl around! :)


It was a great weekend in a part of the province that I have not visited as often as I would like recently.
Posted by Josh Vandermeulen at 13:03 No comments:

Shorebirding at the Atlantis Niagara Winery in Beamsville

Shorebirds are one of my favourite groups of birds, though we do not always have excellent shorebird habitat locally here in Niagara. The past couple of years had been good but this year most of the usual spots are unsuitable due to high water levels, fields becoming overgrown, and various other reasons. Earlier this summer Ryan Griffiths, a local birder here in Niagara, discovered a great spot that is very accessible just off of the QEW near the border of Lincoln and Beamsville. The Atlantis Niagara Winery has a section of flooded field that has proven to be quite attractive to a variety of species. I have not had a chance to stop there very often, but fortunately several other intrepid birders have stopped in frequently and had some great finds.

For those of you interested in visiting the Atlantis Niagara Winery, I've attached a map showing the location of the shorebird habitat. Also note the large man-made pond to the immediate east, which often attracts shorebirds, while some of the fields in the area have been tilled and are proving quite attractive to Killdeer and other plovers. The orchard east of the pond has been flooded at times, and shorebirds sometimes can be found in there too. If visiting, the winery requests that you park in front of the main building as opposed to parking by the shorebird habitat. 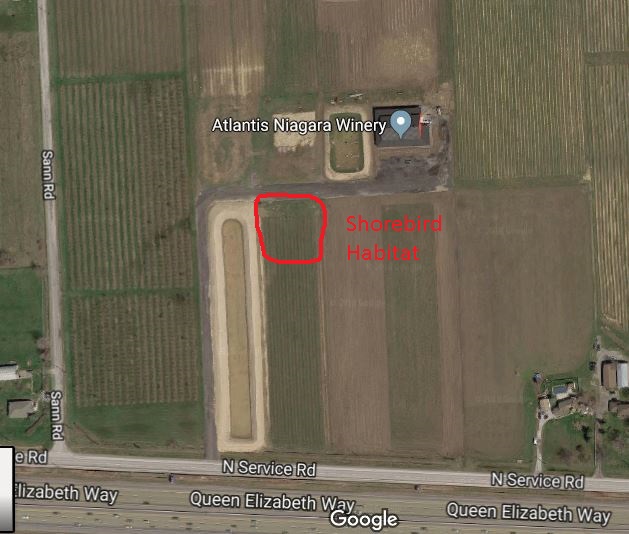 On August 24, Judy Robins discovered a juvenile Wilson's Phalarope at Atlantis which was kind enough to stick around for several days. This prairie species is pretty rare in Niagara and some years go by without any records. Out of the three species of phalaropes, two (Red-necked and Red) are primarily ocean-going, generall only spending time on land when they nest in the Arctic. Wilson's Phalarope is the outlier as it is much more terrestrial, preferring shallow wetlands throughout the prairies (and a small population in the Hudson Bay lowlands). You would never see one in the open ocean like you would the other two species.

The Wilson's Phalarope was a little distant for my camera so I resorted to snapping a few digiscoped photos. The views, however, were awesome!


Much more confiding was one of the Pectoral Sandpipers. While I have only ever seen Pecs during migration and on the wintering grounds I would love to make it to the Arctic one day to witness the spectacular displays that males will perform.


On the evening of August 31 Ryan Griffiths discovered a crisp juvenile Willet at the winery. Willet is a relatively rare species in the province with most records each year pertaining to birds along the Lake Erie shoreline in May, but Niagara has not seen too many records in recent years. Fortunately for the rest of us the Willet decided that it would stay at Atlantis for an extended period of time. Laura and I dropped in on our way home from Pelee on September 3 and lucked out with the Willet feeding at close range. An exciting new species for my Niagara list, and for Laura's Ontario list!

The Willet towered over all the shorebirds, presenting itself as an imposing presence in the wetland.

Last Thursday I was happy to see that a Baird's Sandpiper was working the very south edge of the flooded field. With a bit of stealth it was not too hard to approach close enough to see each detail on every feather. Photoshoots with Baird's Sandpipers do not seem to happen too much for me so I take advantage when given an opportunity.


Baird's Sandpiper generally migrates through the Great Plains; however, small numbers, especially juveniles, pass through Ontario in August through October. This autumn anecdotally quite a few have been seen in southern Ontario, though I can't say this with certainty.

Compared to the typical "peeps" that we see in large numbers in southern Ontario (Least and Semipalmated Sandpipers), Baird's Sandpipers have a much different profile due to the length of their primaries which extend beyond their tail. This gives them a sleek and attenuated appearance, which, when combined with the crisp scaling of their scapulars and wing coverts, make them a very attractive shorebird indeed.


Baird's Sandpipers prefer drier land than many of the other shorebirds and they are commonly observed in recently tilled fields or other habitats far from water. When they do enter water they typically stick to the edge, whereas other species will wade much deeper.


The field between the shorebird habitat and the North Service Road is proving to be very attractive to the Killdeers. I have been checking for some of the more unusual plover-type shorebirds that prefer this habitat, including Buff-breasted Sandpiper, American Golden-Plover and Black-bellied Plover. So far I have lucked out with the latter two species. Here's hoping we can luck into a Buff-breasted before their window closes by early October or so.

It has been an excellent autumn at the Atlantis Niagara Winery so far. Hopefully the habitat remains over the next two months, and if it does, it will be very interesting to see what else will drop in.
Posted by Josh Vandermeulen at 10:12 No comments: